Battle for the capital of the Russian state A.V. Kolchak. Omsk operation 1919 of the year 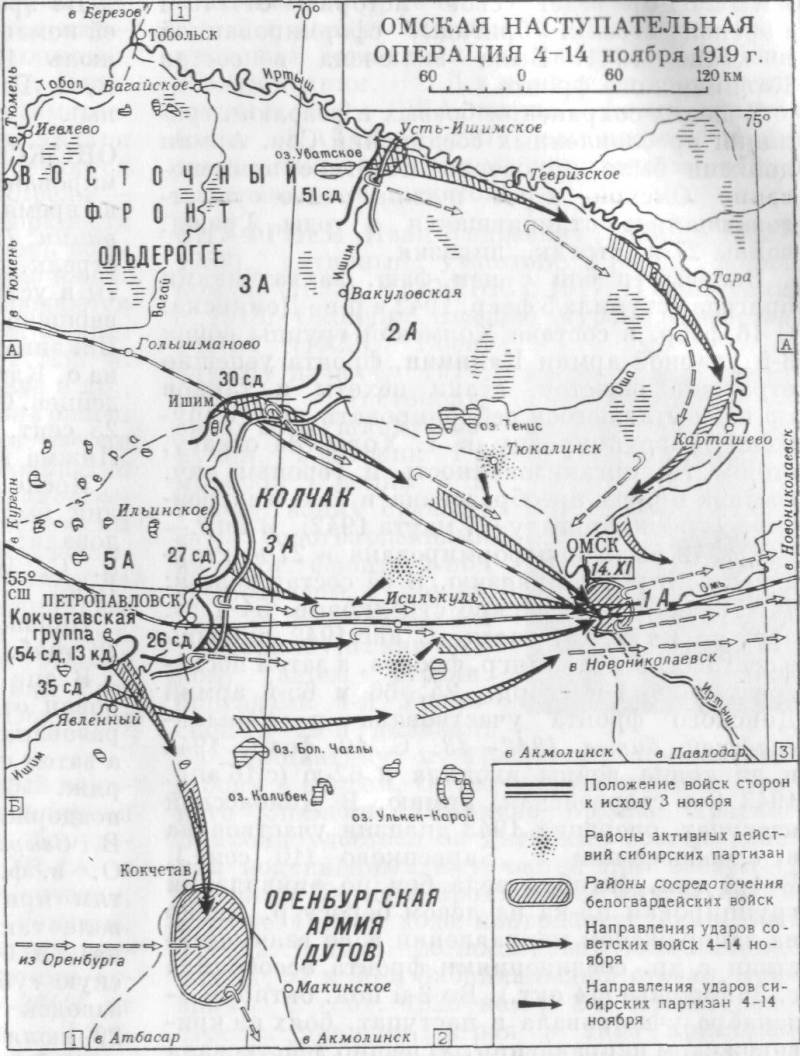 The alignment of forces and the situation

The Omsk operation became possible as a result of the successful operations of the 5 Army achieved during the previous Peter and Paul Operation.

Broken at the turn of the river. Tobol enemy was no longer able to provide adequate stubborn resistance even on the defensive line of the river. Ishim.

Having been defeated in battles between pp. Tobol and Ishim, A. V. Kolchak decided to withdraw his troops (2 and 3 army) to the border of the river. Irtysh - in order to defend the capital of his government, the city of Omsk, together with the 1 Army.

The idea of ​​the Omsk operation of the Reds included the application of a concentric strike to Omsk. The 5 Army (commander M.N. Tukhachevsky) was to advance along the Siberian Railway, and the 3 Army (commander M.S. Matiyasevich) along the Ishim-Omsk railway. Widely used railway and horse-drawn vehicles. 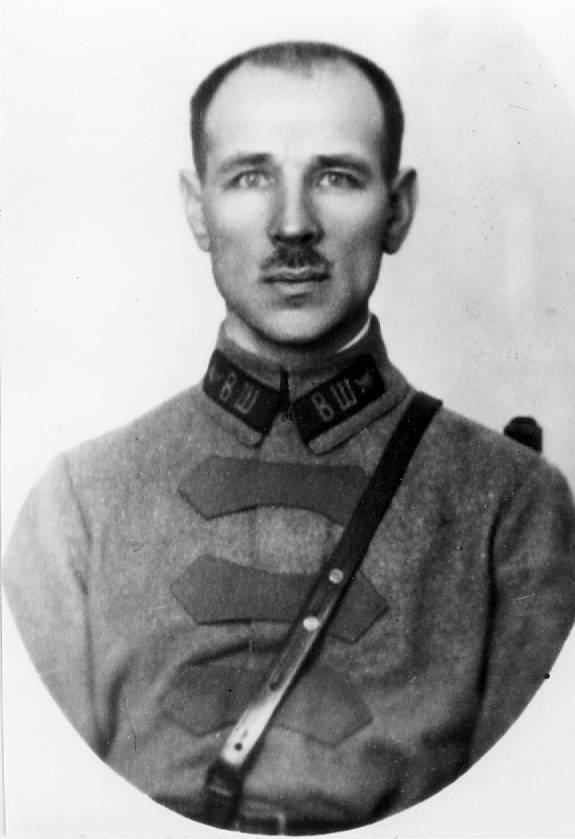 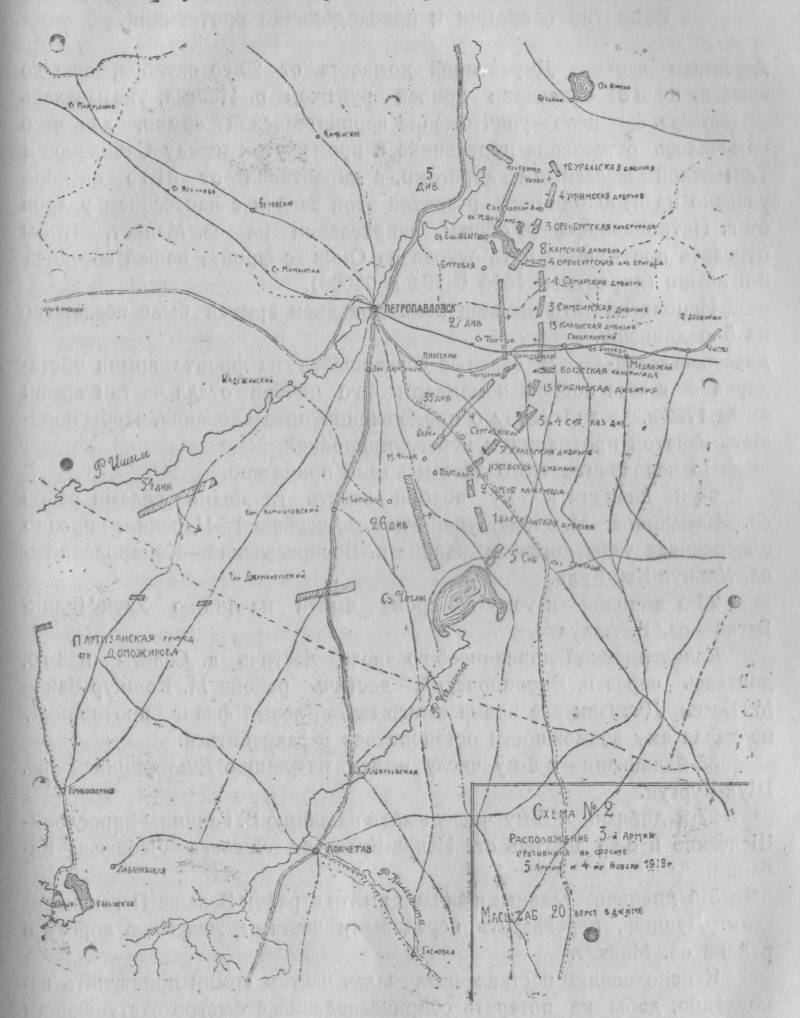 In the unfolding operation, the actions of the troops of the 5 Army can be characterized as a continuation of vigorous pursuit with the aim of capturing the border of the river. Irtysh and Omsk, the strategic and administrative center of the enemy. With the fall of Omsk, the enemy lost the main stronghold, where everything necessary for the life support of the army was concentrated. Warehouses were located here; from here the military units were supplied with shells and other ammunition; Here was the control of the front and the state. 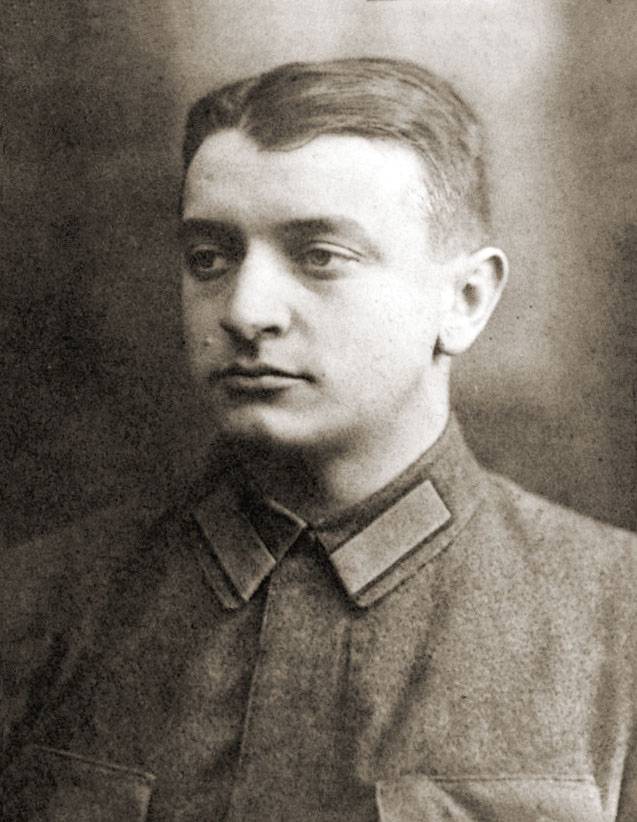 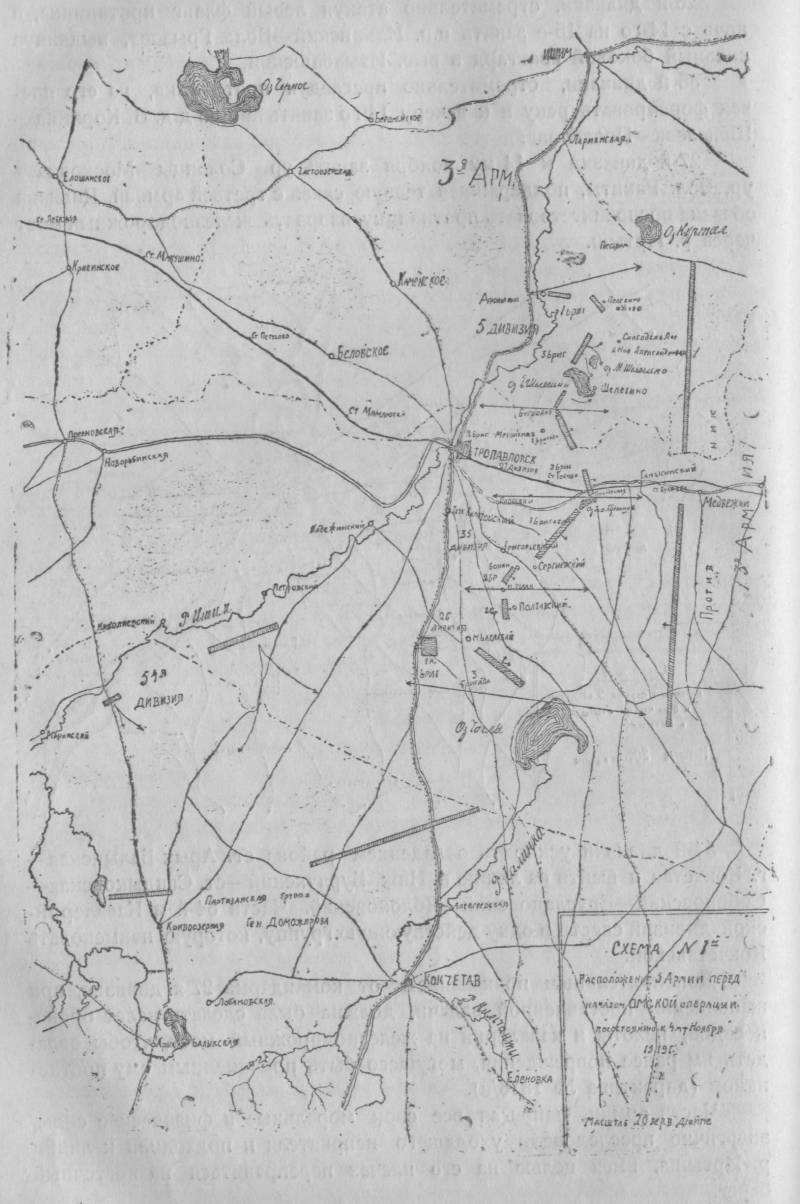 The fall of Omsk was supposed to have a serious impact on the further course of events, bringing closer the moment of defeat or surrender of the enemy.

The Omsk operation developed in two directions: the first is the Omsk operation, along the Siberian Railway, where the 26, 27 and 35 divisions operated, initially the 5 and Cavalry divisions (the 5 I division was withdrawn on November 8 front; Cavalry was then transferred to the Kokchetav group acting on the right flank of the army). The Kokchetav group was a side screen of the right flank of the 5 Army and was supposed to provide the main forces.

The situation at the front of the 5 Army by November 4 can be characterized as follows.

On the right flank of the main operational area there were units of the 26th Division: 3th Brigade - east of Kamyshlovsky; The 2th brigade occupied the evening of the 4th November, Poltavsky; The 1-I brigade was in the division reserve in the village of Kamyshlovsky.

To the south of the railway section M. Chulak - Lake. Afternoon was occupied by the 35-th division, located on the line: the 2-th brigade with the fortress regiment attached to the 2-th Kazan –– M. Chulak –– Borki, and the 1 –– brigade –– to the west –– Sergievsky –– Lake. Afternoon.

To the north of the railway, units of the 27-th division operated, which by the evening of the 4-th November occupied the 3-th brigade near the station. Afternoon, 1-th brigade - went to the area east of the village. Metlichnaya and the village of Bugrovaya. The last point was occupied after a fierce battle by the 237th regiment together with the 43th regiment of the 5th division. Here, over 300 prisoners were captured by the Reds. The 2-I brigade, making up the divisional reserve, was in the city of Petropavlovsk.

On the left flank of the 5 Army, the 5 Division operated, which, with its 3th Brigade on the evening of the 4th November, launched an offensive to reach Lake Lake. Great and Mal. Shelegino - Slobodskoy Log (Novo-Aleksandrovka). 1-I brigade occupied the right flank d.d. Usovo - Pelevina, and the left flank was in the area of ​​the village Afonkina - to communicate with the 30-th division of the 3-th army.

The cavalry division entered the area of ​​Grigoryevsky and continued the offensive in the northeast direction.

In the secondary operational area Kokchetav-Atbasar operated the 54th Division (consisting of the 2th Main and 2th Fortress Brigades, which were located in the area of ​​the village of Nikolaevsky-Petrovsky by the evening of the 4). To strengthen the composition of this division, the Steppe Brigade moved from Troitsk (a local formation consisting of two regiments: Akmolinsky and Kustanaysky; on November 4 the brigade was located in the vicinity of Presnogorkovskaya station). 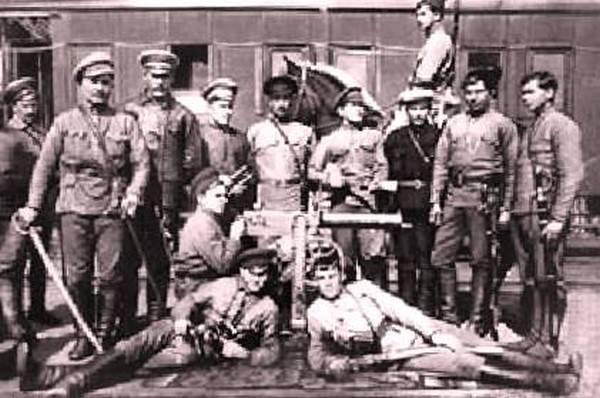 At the front of the 5 Army, the 3 Army of the enemy continued to operate as part of the same 5 groups: Domozhirova, Stepnoy, Ural, Volzhskaya and Ufa, with a total number of up to 13 infantry and 7,5 cavalry divisions, including up to 15800 bayonets, Saber, 11300 machine guns and 300 guns.

These forces were located as follows.

Units of the Steppe group consisting of the 26th Siberian Cossack, 5th partisan Annenkov divisions and 1th Orenburg brigade acted against the 2 division.

At the site of the 35th division, the presence of the Ural group from the units of the Izhevsk, 11th and 7th Ural, 3th and 4th Siberian Cossack divisions was observed.

In the railway strip against the 27 division was the Volga group of the 13 Siberian division, the Volga cavalry brigade, 13 Kazan, 3 Siberian and 1 Samara divisions.

In the area of ​​Kokchetav there were units of the 4 Army Corps, which had retreated from the area of ​​Kustanai, and several regiments from the group of General Domozhirova. 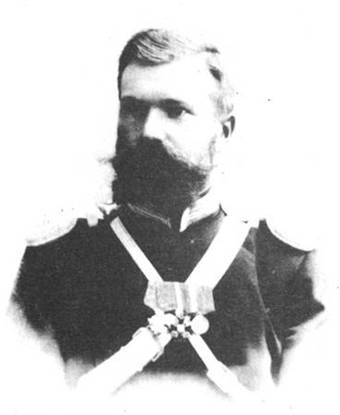 Major General L. N. Domozhirov, Head of the 1th Orenburg Cossack Division and Commander of the Horse Group of the 3 Army

From a survey of prisoners of war, the Reds found out that the enemy, after he failed to stay on the p. Ishim also stopped or at least slowed down the successful offensive of the Soviet troops, withdrew its units from the battle line, which remained steadfast, and grouped them in the vicinity of Art. Isil-Kul - in order to prevent the Reds from approaching the turn of the river. Irtysh. These parts were replenished to staff.

The commander-5 on the 4 of November gave the army units the directive No. 1752 / n. - the continuation of the persecution in order to prevent the rearrangement of the enemy.

54-th division to the 8-th November to occupy the area of ​​Lake. Kamyshnoe - M. Kystaubay - peak. Aksuisky - Tsarsky, firmly providing road junctions in the area of ​​the settlement of Voskresensky - Komarovsky - lake. Ulkun-Kos-Kul.

35-th division - by the 8-th number go on the line Ekaterininsk - lake. Pike-Kurguya.

27-th division to the 5-th number to go on the line V. Gankin-Zarosloe-Shelegino and 8-th to reach the station. Isil-Kul - Art. Losieva - Swan - Boar.

5-th division - go to the area Bolshe-Peganskoe - loan. Stuffy, intercept the advanced parts of the railway in the area of ​​Lake. Mangut.

During the fighting on the army front from the 4 to the 8 of November, one can note resistance from the enemy only in the railway strip - where the rearguards were supported by an armored train.

The 26-I division led the offensive as part of three brigades, of which one (1-I) was in reserve and was moving beyond the right flank of the division. 3-I brigade, having launched an offensive from the area of ​​ur. Tamarlau - M. Barlabay, advancing in the direction - the place of the Tainchin fair and further to the village of Uzunchilik.

The 2-th brigade of the 7-th reached the area of ​​Veselovsky and, continuing the further offensive, went on the 9-th of November to the line of Lake. Muzdy-Kul - Lake Bol Allua

Parts of the Cavalry Division in the evening of the 7 number reached the village of Selety and continued the march to the southeast.

More lively hostilities took place on the site of the 35 division, where the Reds had to meet resistance from the enemy in some places, and take some points after short but stubborn battles.

Moving by two brigades in the direction of Borka - Ivanovsky - Murza - Keldy - Yekaterininsky and the village of Raevka - Uspensky - M. Dzhurat, the division, having overturned the enemy rearguards, came to the 6 on November 2-th brigade in the area of ​​M. Balpash and the 1-th - count . Kryk-kudak - Assumption. Continuing the pursuit of the enemy, the brigades by the morning of November 9 reached: 2-I - d.d. Ukrainian - Nights and 1-I - d. Nights - d. Gorodishche.

The enemy was also quite energetic in the area of ​​the 27 division. By resisting the advancing units with fire from armored trains, he tried to hold the front in the railway strip to alleviate the position of his flanks - the troops of the 5 Army that were strongly behind and retreating under pressure.

By the night of November 9, parts of the 3 brigade were occupied by Art. Isil-Kul - the village of Losiev - p. Pervotarovsky, while the 1-I reached the village of Lebyazhya through the Konyukhovsky-Kamyshlov district.

The 2-I brigade, making up the divisional reserve, was located in the area of ​​Konyukhovsky.

The army of the 5 division operating on the left flank had to meet on its way a number of serious attacks of the enemy breaking through the area of ​​the river. Ishim in the direction of the Tyumen railway to the city of Omsk.

Nomination of the 5-th division on the Tyumen branch in the area of ​​st. Mangut put the enemy, acting on the front of the neighboring 3 Army, in a position cut off from the only path leading to Omsk. At the same time, the rapid offensive of the entire 5 Army in the main Siberian Railway lane further worsened the situation for the white units operating on the site of the 5 Division and to the north.

To avoid this danger and be able to first go to the turn of the river. Irtysh before the approach of the red troops, the enemy increased resistance in the area of ​​operations of the 5 division. But did not achieve the desired results.

Parts of the 5 division successfully repulsed the attacks, and by the evening of the 5 th November, the division, after a series of stubborn battles, entered the line of the Krasny-Tavalzhan village and the units of the 3 brigade of the 1 brigade. Bol-Cranberry - Bol. Kurtal - Belyaeva.

Developing the pursuit, the division left on the 8 of November with the right-flank brigade to Lake. Kalmykovskoe and levoflangovoy - on the line d.d. Galkina - Mariinsky.

By the time the junction reached the Tyumen Railway, the withdrawal of the enemy took a hasty character.

The units of the 54 division operating in the Kokchetav direction, developing their advance forward to support the main forces of the army, approached M. Kystaubai - Aksuisky on the 8 number. 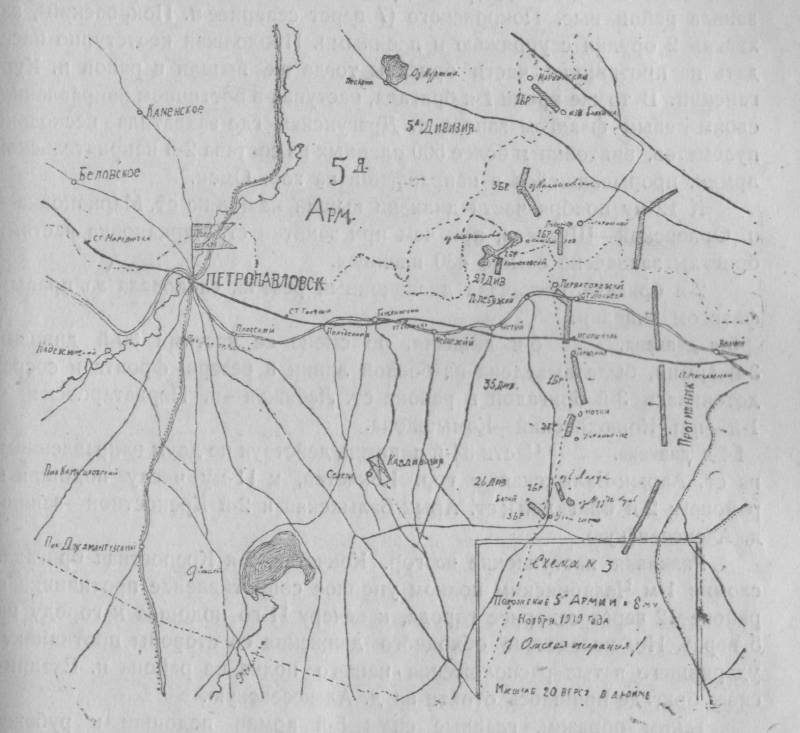 Thus, by the 8 of November it became clear that the enemy had begun to withdraw, resisting only in the railway strip and on the left flank of the army, where he was making his way from the river. Ishim to the east.