The battle that inspired Mel Gibson. Battle of Cowpense

July 18 2019
17
Many who watched the American film "Patriot" about the US War of Independence, remember the spectacular scene of the battle at the very end. Well-trained British troops attack the militia, they give a couple of volleys and turn to flee. The British pursue, break the line, run over the hill, and ... stumble upon the units of the Continental Army built and ready for battle. After that, defeated. The scene is definitely very spectacular. And what is most interesting is not generally fictional. We will talk about the battle that inspired Mel Gibson, the screenwriter of the film “The Patriot” and starred, today. 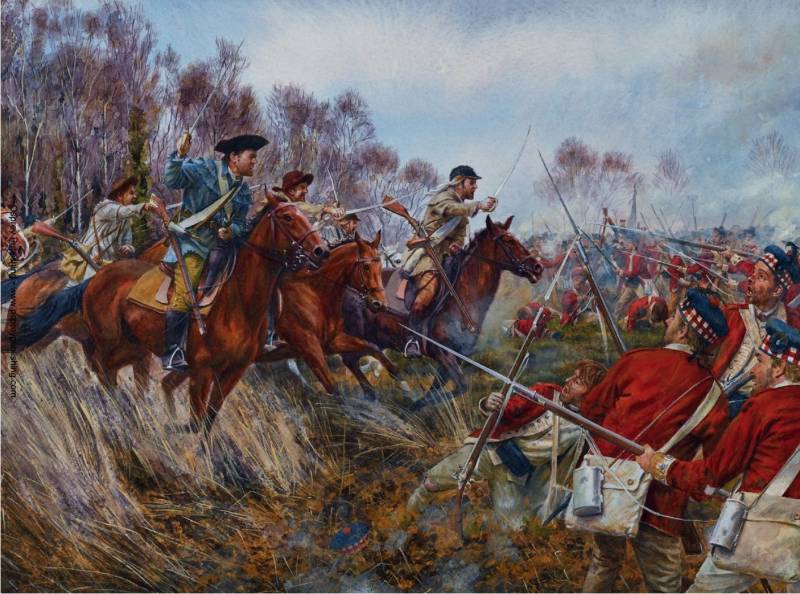 War in the South

The 1781 campaign of the year in the South of the rebellious thirteen colonies was more like a feverish attempt to find the combative path of victory in the war, rather than something systematic and progressive.

The British regular troops, with a few exceptions, easily crushed the rioters, but the British did not bring any tangible strategic results. An open military rebellion genie was released as early as 1775. It could only be defeated by gradually taking control of the whole territory and thorough political cleansing. But it was not in a hurry to allocate enough forces for this London - it was necessary to control other overseas lands.

The war went on for years, and the British commanders became more and more convinced that it would not be possible to win by simple field battles. Beaten and crushed, the American armies quickly thawed in times of failure, and just as quickly gathered back to places where there were no British troops at the moment.

The last chance for the British was to shift the fighting to the South. There the percentage of loyalists was higher than in any Pennsylvania or Massachusetts. An agricultural, “traditional” region, a neighborhood with more aggressive Indians, and, as a result, a greater tendency to seek protection from a strong power. It seemed to the British that if they came to the region, the loyalists who had been hiding before would show themselves. The Crown will have a solid rear, with the support of which it will be possible to quietly and gradually conquer the North.

These expectations were not justified - of course, there were loyalists in the South, and not a few, but they were quite successfully stopped by the local rebels. In this regard, the War of Independence was also civil - in the South there was a real massacre between these two factions. The usual gangsters, who adjoined either to the other side, in search of opportunities to plunder, added fuel to the fire.

The Continental Army and the militia subordinate militias also had enough problems. In August, the 1780-nd threw them hard at Camden, and the army again ran away. The guerrilla war and the massacre between the rebels and the loyalists, however, continued, which supported the dynamics of the general confrontation. Nevertheless, the Americans understood that they had to change something in order not to play out to yet another major defeat. 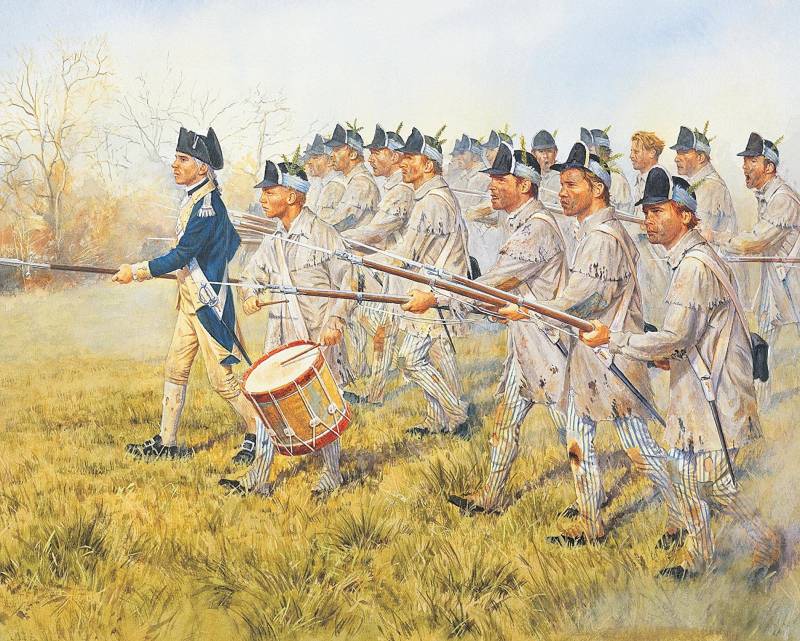 To call the stomachs of the rebels full, and the form of clean and new means to sin greatly against the truth.

The first thing "cleaned" the tops. Instead of defeating Saratoga in 1777, but the failed Camden Horatio Gates, the southern army was led by Nathaniel Green. He immediately with all the energy took to restore order. Proclaimed independence from the Crown, some states were not in a hurry, however, to fully devote themselves to the cause of war with the British. They, of course, provided soldiers, but often saved on their weapons and uniforms.

Green intended to put an end to this. The level of mass desertion and instability in battle was directly dependent on the rumbling of the stomachs and holes in the shoes. However, a soldier who had these same shoes in principle could often consider himself lucky - under the cities of Charlotte and Hillsboro Green found many soldiers walking about, as he described, in “uniformed Indians”.

In order for the army to be better fed, and, as a result, to cease to be a torn-off crowd, he divided it - if he collided in this condition with the British, they would still have broken its remnants again.

One of the resulting "divisions" was the detachment of Daniel Morgan. Acting from the west bank of the Katoba River, he made raids on British garrisons. And “finished the game” - in January 1781, the English commander-in-chief Cornwallis sent a detachment under him under the command of Banaster Tarlton.

On paper, Morgan was superior to Tarlton - 1900 man vs 1100. But this is with the rear units - "active bayonets" were much smaller, in general, the same 1100 people. And the average quality of the British troops was much higher. And the English had 3 times the number of riders, well suited for action on the meadows.

In addition, Tarleton had a specific task - nakostylyat Morgan, and went light. The Americans did not have a permanent base nearby, and carried with them a wagon train. Sooner or later they would have been overtaken, and January 16 Morgan decided to give battle.

He chose the hills under the town of Cowens. The position was so-so - the flanks are open, the battlefield is not completely visible, behind the river. The latter, however, was more likely to be at hand - knowing the tendency of the Americans (especially the militia) to scatter, so Morgan was at least sure that there would be nowhere to run. 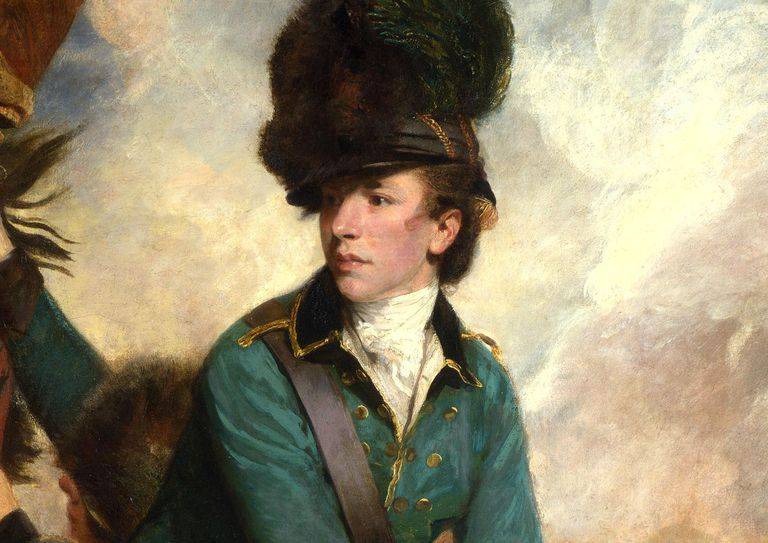 His only chance was not to care about tactics books, and try to come up with something new. Morgan coped with this: his forces consisted of three infantry lines located on the hillside - the deeper, the more impressive. The first line, which consisted of all 150 militias, was to start a fight, and then merge with the second. That, after this, was supposed to give two volleys, after which it was possible to retreat beyond the hill and reorganize - Morgan did not feel illusions about the ability of the militia to hold the enemy onslaught. But the shots could upset the British order, and in this plan they could be useful. This made it possible to counterattack for the main, most reliable and strong line - 450 soldiers of the Continental Army.

But on the morning of January 17, when the battle began, everything went wrong.

The enemy went on the attack. The militiamen launched their two volleys, after which, as planned, they moved beyond the hill. True, the English horsemen immediately attacked them, but Morgan retorted this to the cavalry reserve, and the British cavalry retreated.

Meanwhile, Tarleton’s infantry continued to move forward resolutely. The British began to cover the right flank of the Americans, and its commander tried to maneuver one of his mouth to preempt them. But the team "around and to the left" turned out to be too difficult for poorly "played" Americans. Therefore, they limited themselves to the first part, after which, after a little trampling, they moved to the rear. Seeing the retreat of the company, the whole line followed.

Morgan was not delighted with everything he saw, but he had enough experience to understand: it was too late to deploy retreatings. Now they are doing it in perfect order, but if we begin to actively maneuver, the formation of the inexperienced in the "steps" of the troops will be finally broken, and they will become easy prey. So he decided to retreat over the hill. After that, the soldiers had to turn around and meet the enemy.

The British, meanwhile, saw the most typical picture for themselves - the retreating Americans. So far they have been doing this in order. But Tarlton was used to it - very soon, like with the rebels, it turns into a stampede. It was necessary only to "push." And the advancing "red uniforms", even without waiting for the reaction of the commander, rushed forward - they also thought they knew how this would end. Tarleton did not mind - not only that, he threw everything he had on the table, sending the entire reserve to the attack.

But the reality was far from perceptions. Having run into the hill, the British finally collapsed the ranks did not see the American infantry, not fleeing, but fully prepared for battle. Lead volleys immediately flew into the British - not ready for such a dense fire, the “red uniforms” turned into an unorganized crowd. Immediately, the rebellious cavalry, which had fallen on the right flank, had time to gather again for the strike. A few minutes later, the attack was completed by American infantry - the soldiers of the Continental Army on the front and the militia who had time to reorganize on the British left flank. 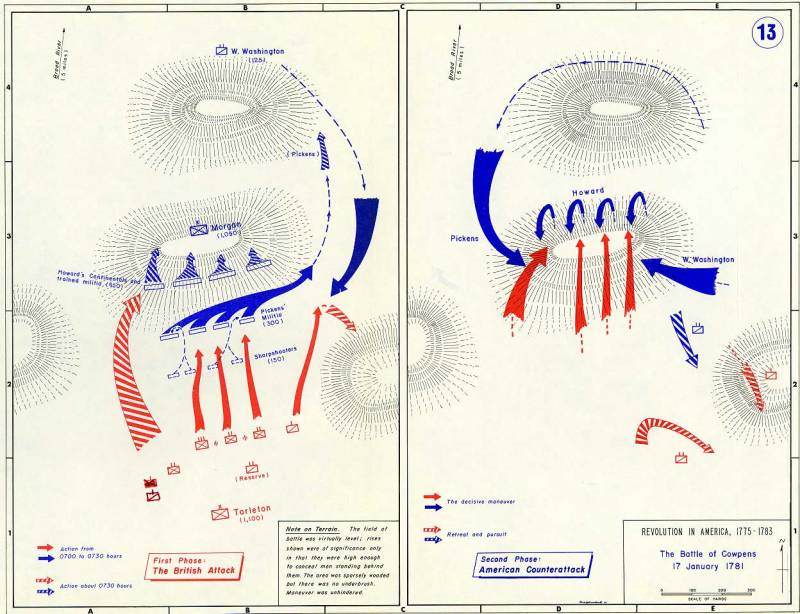 It was a complete rout. Tarlton barely blew his feet. The losses of those killed and prisoners exceeded 80 per cent - according to the results of the battle at Cowpense, the British were not counted more than 900 people. The Americans won the victory, almost for nothing, 25 killed.

Morgan immediately became a celebrity in the Continental Army and gained the authority of a tactical genius. It seemed to Americans that they had found a miracle recipe against the streamlined military machine of the British Empire. Subsequently, they often used tactics of echeloned defense against the British. But, of course, she could no longer give such results - if only because the enemy, having painfully burned herself, always assumed something like that and took measures.

But a bright victory affected the most important - it increased the morale. And not only in the army - it was about the confrontation between "patriots / loyalists" and the guerrilla war. Hope to "pacify" the South and find a solid ground for Cornwallis, and without that doubtful, has now collapsed completely. The question of who will win the war is no longer standing.

Ctrl Enter
Noticed oshЫbku Highlight text and press. Ctrl + Enter
We are
Chernobyl notebook. Part of 3Father told
17 comments
Information
Dear reader, to leave comments on the publication, you must to register.