July 18 2019
12
July 13 The 2019 of the year from the Baikonur Cosmodrome hosted a landmark launch for the national space program. A unique orbital observatory "Spektr-RG" set off to surf the endless expanses of space, its flight has been going on for almost five days. The Russian heavy Proton-M booster with the upper stage DM-03 brought the unique telescope into space. Two hours after launch, a successful separation of the Spector-RG orbital observatory from the upper stage took place. It is expected that the new X-ray telescope will occupy the vicinity of the Lagrange point L2 approximately 100 days of flight, after which it can begin to observe the Universe. 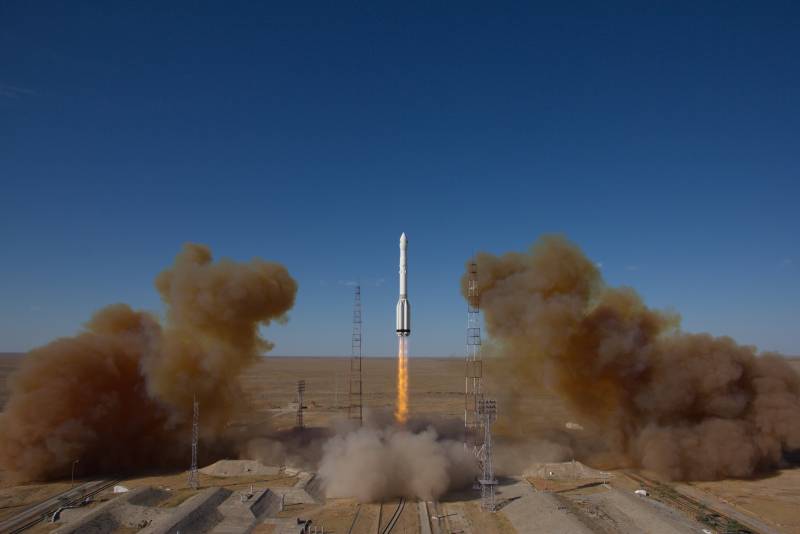 It is worth noting that the Spectr-RG is already the second scientific device of the Spectrum series. The first Russian spacecraft, the Spectr-R (Radioastron), was successfully launched into 18 on July 2011, its life cycle ended in January 2019. The third and fourth spacecraft of the Spectrum series are currently under development. These are the new space telescopes Spectrum-UV (Ultraviolet) and Spectr-M (Millimetron), which are being developed by Roscosmos in close cooperation with other states. The launch of these two telescopes will take place no earlier than 2025, with the international scientific community pinning great hopes on them, since both projects are unique, opening up new opportunities for space exploration. It is expected that the devices will help answer many questions of astrophysics and cosmology.

It took more than 30 years from concept to project implementation. The concept of a new spacecraft for scientific purposes was developed in 1987 year. Representatives of the Soviet Union, the GDR, Finland, Italy and the United Kingdom worked together on the creation of an astrophysical observatory. The design of the device engaged in the 1988 year. This process was entrusted to engineers of the NP Lomochkin NPO, the Space Research Institute of the USSR Academy of Sciences was in charge of coordinating the work on the project.

The ensuing collapse of the USSR, problems in industry and the economy of the end of 1980, the beginning of 1990, and chronic underfunding of work seriously delayed the preparation of the Spectrum-WG observatory. The project was delayed when funding appeared, new difficulties appeared. During this time, the filling and the composition of the equipment of the apparatus have been fully updated several times; technologies, as is known, do not stand still. The composition of the project participants also changed, and in the end, apart from Russia, Germany remained in the project. The agreement between the Federal Space Agency in the person of Roscosmos and the German Aerospace Center (DLR) was signed in 2009 in the framework of the international aerospace show MAKS-2009. The composition of the scientific tasks solved by the apparatus also changed, since some of them were no longer interested in researchers. As a result, the final appearance of the spacecraft in the form in which it was launched into space was formed only a few years ago, and the process of its coordination also took some time. At the same time, our German partners also encountered difficulties in the production process.

In its realized form, the new orbital astrophysical observatory "Spectr-RG" ("Spectr-Rengten-Gamma") is intended for compiling a complete map of the Universe in the X-ray range of the spectrum. It is worth noting that this is the first in the national stories telescope (taking into account the Soviet period), equipped with oblique optics optics. For at least the next five years, the Spectrum-RG Observatory will be the only X-ray astronomy project in the world. According to Roscosmos, the review of the whole sky by the modern orbital observatory "Spectr-RG" will be a new step in X-ray astronomy, which began to actively develop 55 years ago.

Roles in the project "Spectrum-WG" are divided as follows. Satellite (Navigator platform) - Russian development, launch from Baikonur - Russian (Proton-M rocket), main telescope - German eROSITA, additional, accompanying - Russian ART-XC. Both mirror telescopes, which operate on the principle of oblique X-ray optics, are unique developments that are designed to complement each other, providing the observatory with a full view of the starry sky with record-breaking sensitivity never used before.

The unique X-ray telescope, launched into space on July 13, consists of several main units. The structure of the orbital observatory "Spectr-RG" includes a basic module of service systems, the development of which was the responsibility of the engineers of the Russian scientific-production association to them. Lavochkin. This module was developed by them on the basis of the Navigator multipurpose service module, which had previously successfully shown itself in a number of space programs. In addition to the basic module, the orbital observatory includes a complex of scientific equipment, the basis of the complex consists of two X-ray telescopes. According to the official website of the Roscosmos company, the total mass of the filled Spectrum-RG spacecraft is 2712,5 kg, the payload mass is 1210 kg, the electrical power of the observatory is 1805 W, the data transfer rate of (scientific information) is 512 Kbit / s, the active period Scientific work - 6,5 years. 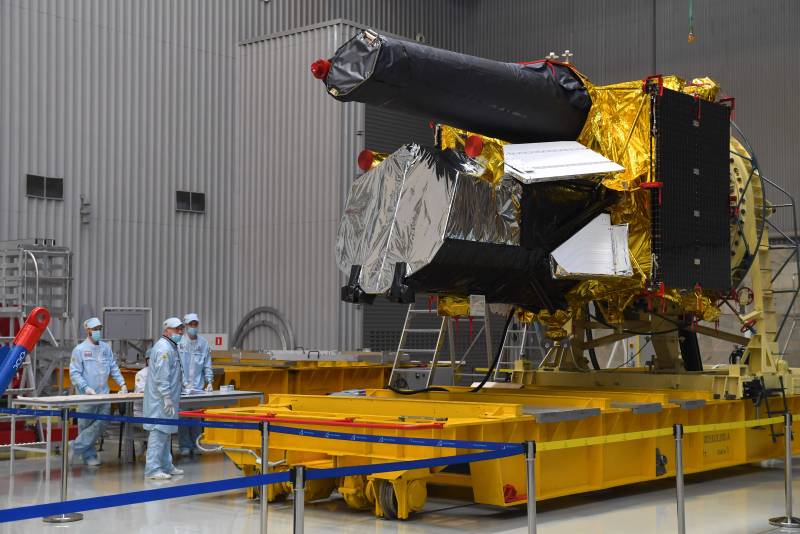 The main equipment of the orbital observatory, which now leads the way to the L2 Lagrange point, are unique X-ray reflecting telescopes created by the designers of Germany and Russia. Both telescopes operate on the principle of oblique x-ray optics. As noted in Roscosmos, X-ray photons have a very high energy. In order to be reflected from the mirror surface, the photons must hit it at a very small angle. For this reason, the X-ray mirrors used in the telescopes of the Spectrum-RG orbital observatory are specially made elongated, and to increase the number of registered photons, the mirrors are inserted into each other, obtaining a system consisting of several shells. It is reported that both German and Russian X-ray telescopes consist of seven modules with X-ray detectors.

The creation and production of the Russian X-ray telescope, which received the designation ART-XC, was answered by engineers from the Space Research Institute of the Russian Academy of Sciences, who worked in close cooperation with the Russian Federal Nuclear Center located in Sarov. The ART-XC X-ray telescope created by Russian scientists expands the capabilities and working energy range of the eROSITA telescope of the German assembly towards higher energies (up to 30 keV). The energy ranges of two X-ray telescopes mounted aboard the Spektr-RG spacecraft overlap, which provides scientific equipment with an advantage in terms of increasing the reliability of research results and carrying out calibrations of equipment in orbit.

Specifications of the telescope ART-XC

The creation and production of the German X-ray telescope, called eROSITA, was the responsibility of the engineers of the Institute for Extraterrestrial Physics of the Max Planck Society. As noted on the official website of Roskosmos, a scientific instrument created in Germany will allow for the first time in history to review the entire starry sky in the energy range from 0,5 to 10 keV. At the same time, experts note that the telescope produced in Germany is more “big-eyed”, its full field of view and angular resolution is higher than that of the Russian ART-XC telescope. At the same time, eROSITA is inferior to the Russian telescope in the energy range. That is why the two X-ray telescopes on board the Spektr-RG spacecraft complement each other and are responsible for solving various problems.

Specifications of the telescope eROSITA

The research program assumes that the new Spectrum-RG spacecraft will be used to conduct various astrophysical observations over 6,5 for years and will help scientists answer many questions from the field of astrophysics and cosmology. The observatory will work for four years in the scanning mode of the starry sky, the remaining 2,5 of the year - in the spot observation mode of various space objects in the triaxial stabilization mode based on incoming applications from the world scientific community. It is intended to monitor both individual space objects that are of interest to scientists and the selected areas of the celestial sphere. Including in the hard energy X-ray range up to 30 keV, thanks to the Russian X-ray telescope. Approximately another 100 days (about three months) will take a flight of a space telescope from the Earth to the Lagrange point L2 and conduct the first test observations of celestial bodies.

The spacecraft is not accidentally placed into orbit at the L2 point at a distance of approximately 1,5 million kilometers from Earth. This point is considered the most suitable for surveying the entire sky. As experts note, rotating around its axis (approximately corresponds to the direction to the Sun), the space observatory will be able to carry out a full view of the celestial sphere for six months, while the Sun will not be in its field of vision. Over the four years of operation, the scientific apparatus will be able to immediately perform 8 surveys of the whole sky, which will allow scientists to get a lot of astrophysical information. At the same time, due to corrective maneuvers, it will be necessary to solve a rather complicated task, which is to maintain the spacecraft in orbit at a given point. 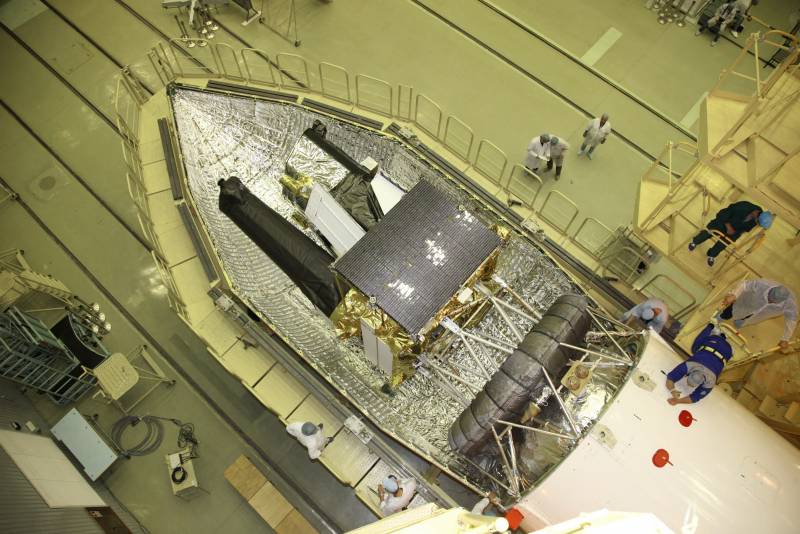 It is known that all data from the Russian ART-XC telescope will be wholly owned by Russia, and the data from the eROSITA telescope is divided in half between Russia and Germany. No matter how funny it sounded, it was decided to divide the sky into two parts. All data on one half of the sky for 4 research year, when the telescope will be engaged in scanning the universe, will belong to Russia, and on the other half of the sky - Germany. In the future, the countries themselves will decide between themselves how to manage the data obtained, how to share information with other countries and to what extent.

The main mission of the Spectr-RG apparatus is to compile a detailed "map" of the Universe in the X-ray spectrum with active galactic cores and large clusters of galaxies. Scientists hope that in 6,5 years of active scientific work at the observatory, it will help humanity discover hundreds of thousands of active corona stars, tens of thousands of star-forming galaxies and about three million supermassive black holes, as well as a huge number of other objects, greatly expanding our knowledge of the universe. understand the processes of its evolution. It is also assumed that the new spacecraft will help in researching the properties of hot interstellar plasma. The work of the observatory is of great interest to all international science. In fact, the new spacecraft allows to obtain data on all astronomical objects known to science. 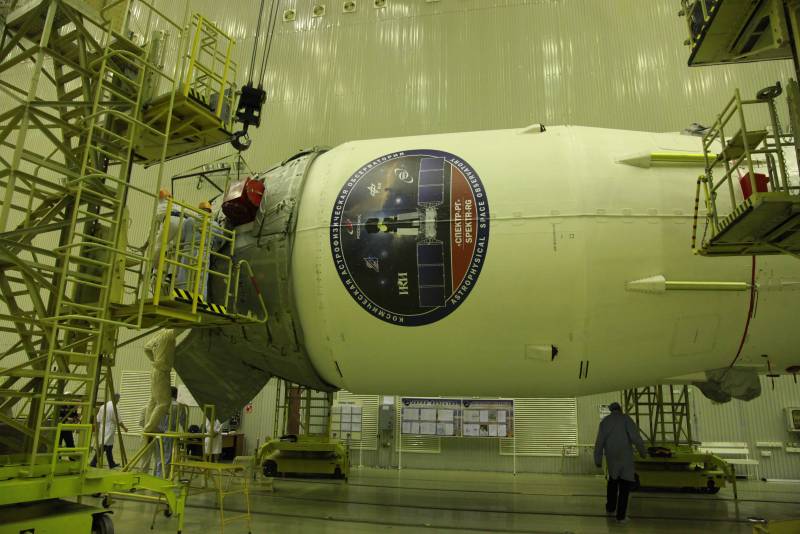 A large-scale map of our universe, which scientists have not yet had, is akin to time travel, which will help answer a large number of questions. One of the most important questions to which the Spectrum-RG telescope can help humankind answer is the question of how the galaxy clusters evolved over the entire existence of our Universe.

We are in Yandex Zen
Spaceport world. Part 1
"Proton-M" waiting for serious competition with the American rocket "Falcon 9"
12 comments
Information
Dear reader, to leave comments on the publication, you must to register.