Krump-Karrenbauer instead of for der Lyayen: the Minister of Defense was replaced in Germany

July 17 2019
76
In Germany, replaced the Minister of Defense. Instead of Ursula for der Lyayen, the seat of the head of the German defense department was occupied by Annegret Kramp-Karrenbauer. This is stated in the statement of the German government. 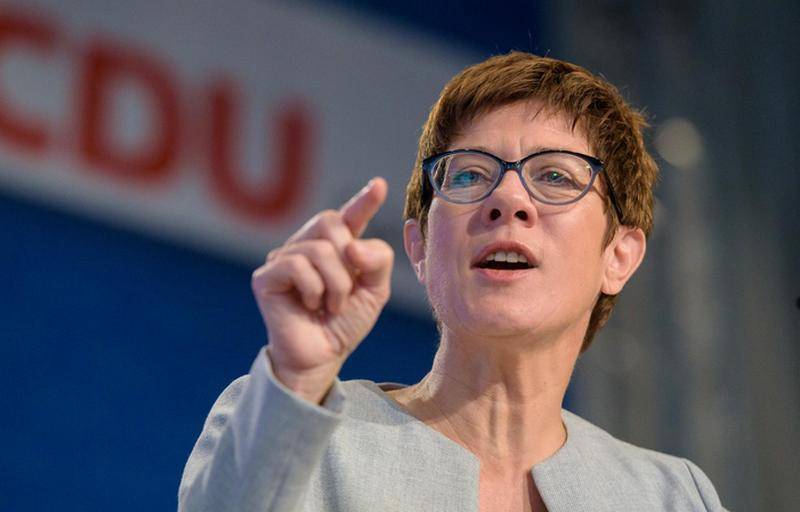 The leader of the Christian Democratic Union (CDU), Annegret Kramp-Karrenbauer, on Wednesday received a letter of appointment to the post of German defense minister in exchange for the retired Ursula von der Lyayen, which was approved by the European Commission the day before. The inauguration ceremony took place at the Bellevue Palace in Berlin.

Reportedly, the transfer of authority took place in the presence of German Chancellor Angela Merkel.

Our country needs a strong Bundeswehr, and the Bundeswehr needs strong support in politics and throughout society.
- First Deputy Chairman of the Bundesrat Michael Muller said after the approval of the new Minister of Defense.

Earlier, German Chancellor Angela Merkel explained that the change of the Minister of Defense took place in such a short time because of the importance of this post for the security of Germany.

The Ministry of Defense, the Minister of Defense, exercises command and has military power. We cannot leave this post free for long
- said Merkel.

Earlier it was reported that Annegret Kramp-Karrenbauer could replace Angela Merkel as Chancellor of the Federal Republic of Germany, as she already changed her position in the CDU party, taking the place of the leader. Experts believe that after being nominated for the post of Minister of Defense, Kramp-Karrenbauer will receive additional levers of power that will help her to further qualify for the Chancellor’s chair.
Ctrl Enter

We are in Yandex Zen
Merkel resigned as head of the party
The collapse of the CDU / CSU coalition and the end of Merkel's career
76 comments
Information
Dear reader, to leave comments on the publication, you must to register.