July 11 2019
24
I have been there. Been in the valleys
Where everything gently caresses the eyes,

On the terrible, I used to be the rapids
Balkan inaccessible mountains.
I have seen those distant villages
Behind the light plow of a unak,
I was high on the peaks
Where the clouds rest.
I used to be there in the summer and sultry,
Been a blooming spring -
I breathed the whole land with work of the deceased,
Played in the colors of the kids swarm.
Calmly, peacefully wives spun,
And they sang songs of the days of the past,
And waited patiently
From the fields of their workers ...
Gilyarovsky V. A. I saw them in smoke, dust ... / V. A. Gilyarovsky // Bulgaria in Russian poetry: an anthology / [comp. Boris Nikolaevich Romanov; Artists Andrei Nikulin]. M., 2008. - C. 160-161

Influence on the formation of the Balkan military culture

Knights and chivalry of three centuries. In the past, the material about the warriors of the Balkans, and above all the Serbs, Romanians and Bulgarians was told in the words of the British historian D. Nicolas. But a continuation was promised, based on the works of Bulgarian historians, and here it is in front of you, including materials from some English-speaking researchers. 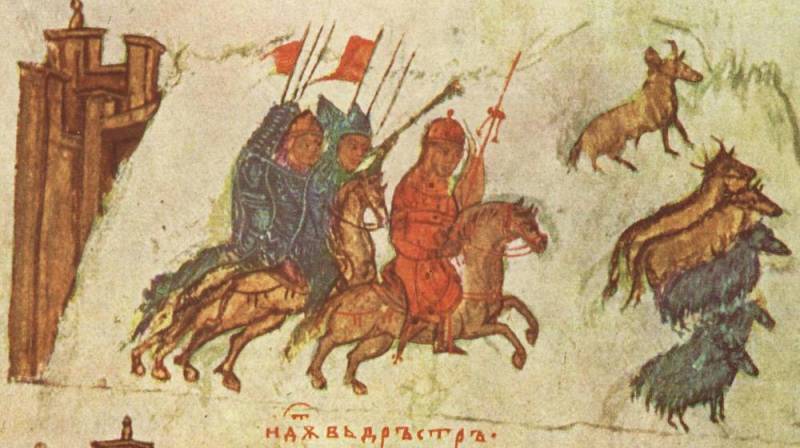 Recovery weapons and stories The Bulgarian medieval elite is a very difficult task, since the written sources that have come down to us are small in size, which greatly complicates their interpretation. There are archaeological monuments, manuscripts and frescoes originating from Bulgaria and the adjacent regions. But the same source murals are not completely reliable and should be approached very carefully. 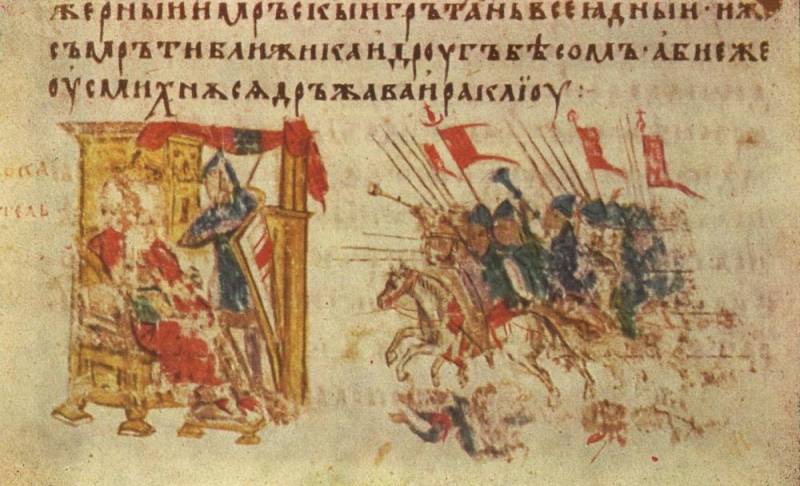 The Chronicles of Manasseh, 1331-1371 Most likely the warrior on the left is holding a large teardrop-shaped shield in his hand. (Vatican Apostolic Library, Rome)

Nevertheless, it is clear that the Second Bulgarian Kingdom was already a completely feudal state, the elite of which consisted of aristocrats with significant land holdings, which included both villages and towns. Over time, their privileges and growing wealth turn them into local rulers, with complete autonomy in relation to the supreme state power. However, they submitted to this power, and in exchange for the privileges granted to it, and the territories that they owned. And since the main occupation of any medieval aristocrat was to engage in military affairs, it is obvious that the same thing took place among the Bulgarian aristocracy, who had been trained to possess since childhood. weapons, ride, and understand the basics of strategy and tactics. 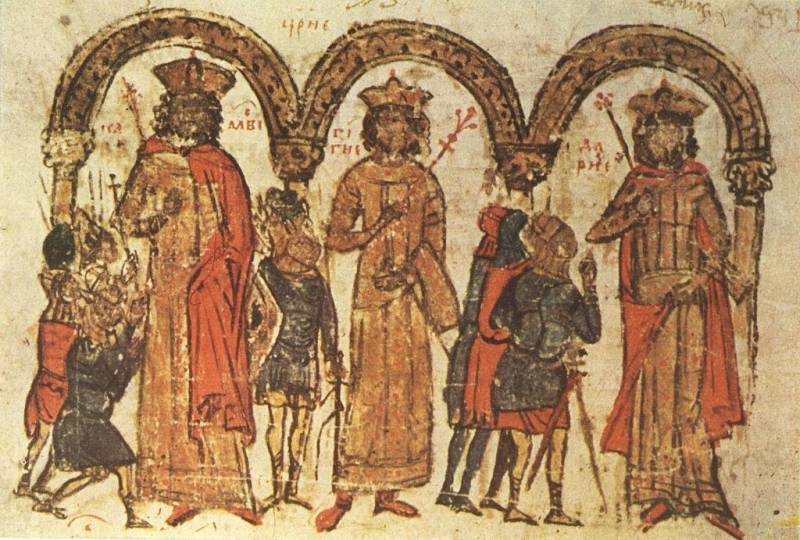 Miniature from the Chronicles of Manasseh, 1331-1371 The kings of Kambis II, Giges and Darius I. Next to the soldiers, the torso of which clearly covers the armor, but almost all have no legs of protection. (Vatican Apostolic Library, Rome)

And it is clear that such socially significant people should have been well protected, although the assumptions about the nature of the armor of the Bulgarian nobility still provoke sharp disputes. What, however, is well known and cannot be challenged? For example, the fact that in the XII century. through the territory of the Balkan Peninsula to the capital of Byzantium Constantinople, the squad after the squad moved the Crusaders from Western Europe. Along with such a phenomenon as the invasion of the Normans, this inevitably led to borrowing in the field of military culture. First of all, it concerned heavy cavalry. At the same time, a number of historians point out that it was the 12th century that was a time of change in the Byzantine culture, since then many Western customs also appeared in Byzantium. One of the innovations were knight tournaments in which the emperor Immanuel Comnenus competed with the rulers of the Latin kingdoms. 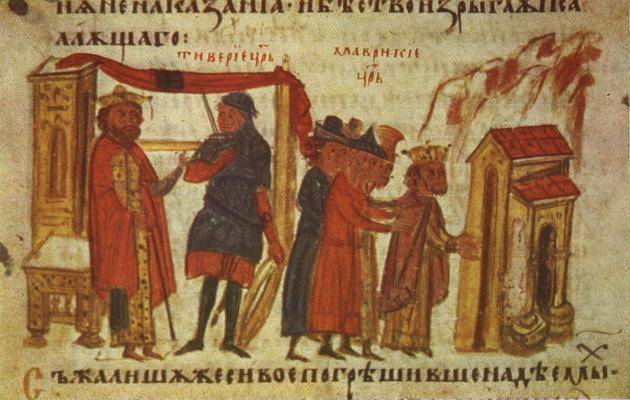 On this miniature from the Chronicles of Manasseh, the warrior most likely wears chain mail Shoss. The metal on the thumbnail is clearly marked in blue.

A part of the military elite that participated in these tournaments belonged to the Bulgarian boyars, such as Assen and Peter, a significant part of whose European possessions were located in Bulgaria.

In addition to Byzantium, the Normans, Magyars and, as already noted, the crusades, a large part of which passed through Bulgarian lands, had their influence on the formation of the Balkan military culture. At the same time, the growth of Italian city-states and their commercial expansion to the East began. Soon they gain significant influence in the Mediterranean and the Balkans. But after the Fourth Crusade, the West European influence in the Balkans is entering a new phase. At that time, the presence of Western Europeans in the region intensified, especially the French and Italians. And they brought with them new models of armor and weapons. In addition, on the borders with the Bulgarian kingdom, more and more German immigrants appear in the north, from Hungary and western mercenaries in Serbia and Byzantium. In the fourteenth century, the influence of the Italian city-states and Dubrovnik increased even more, so that they became the main centers of commerce in this region. This is confirmed by archaeological finds: a significant number of material culture monuments are of Western origin, mainly products of Italian artisans - jewelry and jewelery, weapons, belts, utensils, etc. All this shows the significant influence of the West on the material culture of Bulgarian cities and scales. trade exchanges between the states to the west of Bulgaria.

In 1240, Bulgaria and other parts of Eastern and Central Europe are hit by Mongol-Tatars. New conquerors from the Great Steppe bring with them a new type of armor, which displaces the old ones. These are clothes made of fabric or leather, as well as steel plates. All this was fastened together and turned into a solid construction. At the same time, more and more metal protective devices for arms and legs began to appear on the armor of European warriors, which, in combination with chain mail, made it possible to create a fairly good protection. The servilera's story begins with the time it turns into a helmet bascinet. Its first use was recorded at the end of the 13th century in Padua, where it was referred to as a helmet used by infantry, and then quickly spread throughout Europe, where its various modifications and forms appeared. At the same time, the "big helmet" was also used, but was purely equestrian. However, it is unlikely that he enjoyed popularity in the Balkans and in Bulgaria in the same way, although in general her armament followed western fashion. This is clearly seen from archaeological finds, various images on murals, coins, miniatures, stamps, and random drawings.

The trend of following European fashion

Despite the small number of finds of armor and weapons from the Second Bulgarian Kingdom, they nonetheless show us a clear tendency to follow European fashion. And there are not so many finds that confirm this, but they are there.

European swords, spurs and horseshoes for horses are found in various places on the territory of Bulgaria, there are samples of bascinet helmets from the end of the 14th century, as well as traces of lamellar "armor" such as brigandine. 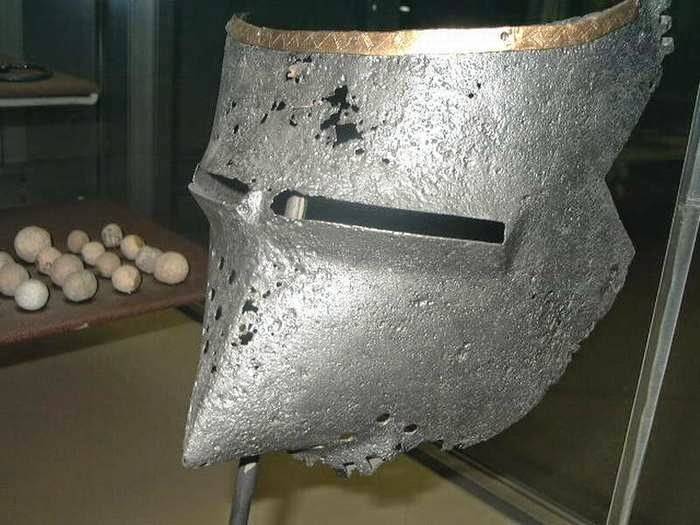 Visitor from the bascinet of the XIV century. (Tarnovsky historical museum, Veliko Tarnovo)

There are written sources from which it becomes clear that the Italian weapons were bought by the Bulgarians both for themselves and for resale to their neighbors, this indicates a well-established arms trade at that time and the widest distribution of the same Italian samples in the Balkans. 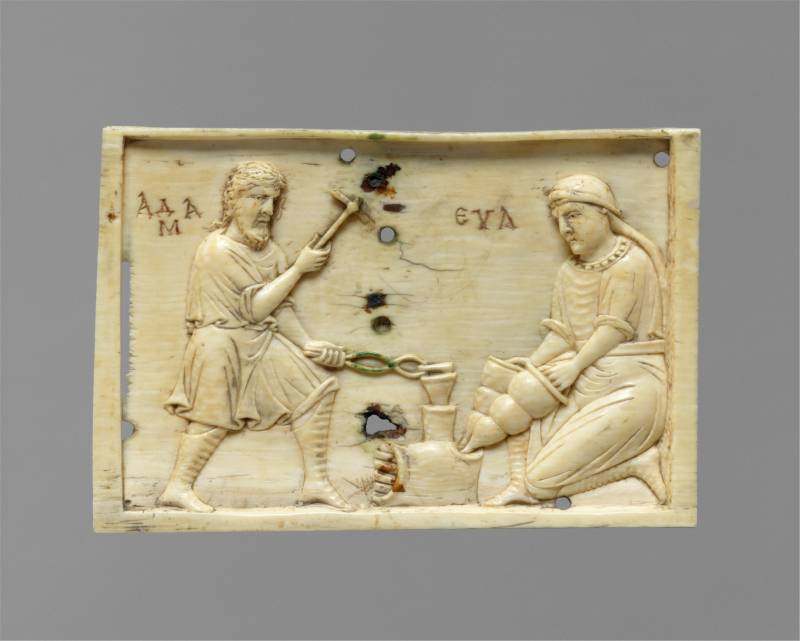 For centuries, the Bulgarians had to deal with neighboring Byzantium and the work of its artisans. Bone palette depicting the work of a blacksmith. Byzantium. (Metropolitan Museum, New York)

How significant are these overseas purchases? Known written records for the period of 1329 - 1349 years, when the Serbian Kingdom in the meantime been acquired 800 canvas gorget, 750 iron knee pads, 500 Chain highway over 1300 plate armor sets, 100 chain mail, 650 bascinet, 800 type barbute helmets, 500 pairs plate gloves, 300 shields, 400 shields "Serb type», 50 helmets Chapelle de fer ( "iron hat»), 100 Gaiters, 500 greaves, 200 sets of forged plates for hands, 500 cowards (evidently chain armor!), 250 complete sets "Armor", and in general - the armor on 833 man and more weapons on 1200 man, all this is the total cost of 1500 gold ducats. And it was not a weapon for the knights. Those always bought and ordered everything on their own. It was on the royal money was purchased uniform weapons for the royal army! 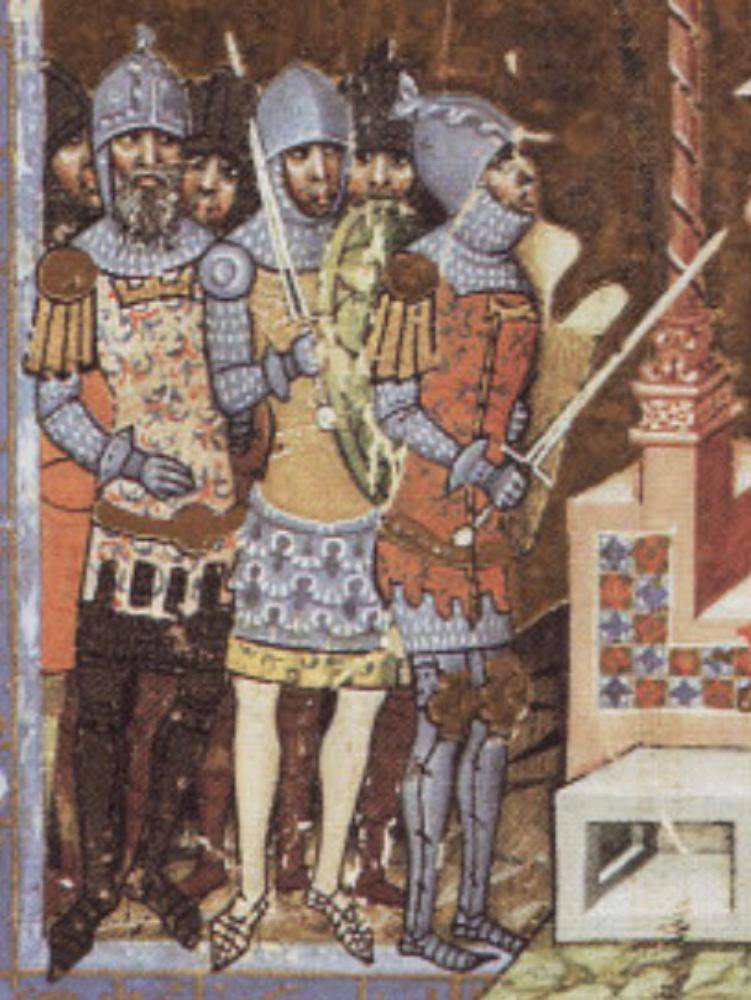 Miniature from the Pictun Chronicle, 1325-1360 On it you can see warriors in well-known to us armor, which were also many times depicted on effigii and medieval miniatures from the manuscripts of this time. (Széchenyi National Library, Budapest)

In the illustrated manuscripts there are two significant and valuable sources that were created almost in the same period, and provide extremely rich information about the time - the Bulgarian copy of the Manasseh Chronicle and the Hungarian pictun Chronicle Pictun. It should be noted that in both images there are both coincidences and some differences, but on the whole their analysis shows that the jackets with long sleeves dominate in the miniatures of both chronicles. 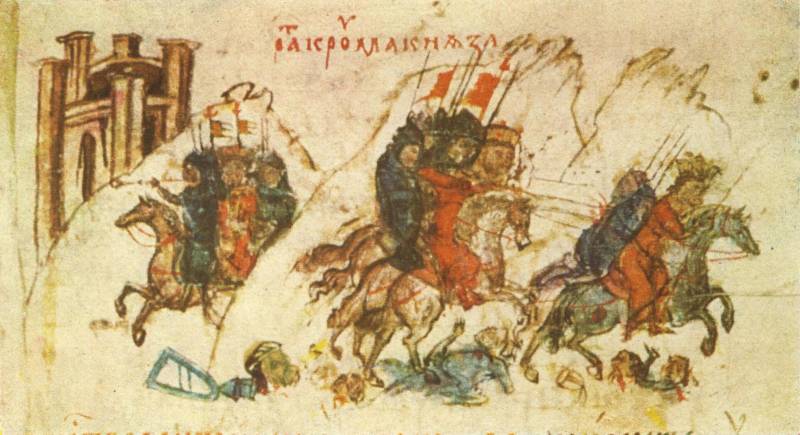 "Battle of Varbysh gorge". Miniature from the Chronicles of Manasseh. Despite the poor quality of the image, judging by the abundant protection of all the limbs and the presence of "lamellar armor" and "overlays", the Bulgarian riders, whom she portrays, did not differ much from their Hungarian brethren. The Chronicles of Manasseh, 1331-1371 (Vatican Apostolic Library, Rome)

In The Chronicles Of Manasseh. in most cases, the armor is painted in a conditional blue color, which can lead to different interpretations of what he saw. But it is clear that there were several types of helmets, made mainly from a single piece of metal: spherical (servoler) and different samples of conical helmets. On the Bulgarian coins there are images of a “big helmet”. Apparently, it was a symbol of chivalry and power.

Miniature from the Chronicles Pictun. And if you don’t know that the Hungarian warriors are drawn here, you will hardly be able to say that, considering it very carefully. (Széchenyi National Library, Budapest)

Regarding the use of cavalry's gauntlet gloves, in the Chronicles of Manasseh, the artist painted horsemen with bare hands, while the riders from Chronicle Pictun wear classical European gauntlet gloves. Interestingly, a similar glove is depicted on a fresco in the Markov monastery near Prilep. Weapons written in both chronicles are swords and spears. Shields are triangular or in the shape of an “inverted drop”. Spurs and bits, found by archaeologists, are typically Western-style.

Another miniature from the same chronicle. Typical saddle seats, typical torso-fitting gambesons, bascinet helmets are also typical. The knight on the right, striking the sword of his opponent on the chest chain. But who is there depicted on the left in the second row? Is this a Negro in a sheepskin fur hat? After all, this is clearly not a helmet, as helmets of this shape went out of fashion more than a hundred years before, and then ... curls are visible on it!

And now something like a conclusion, because in this cycle the conclusions after each material are not provided. As you can see, the second material substantially complements the first one, that is, what D.Nikol wrote. Its authors are more familiar with primary sources (and it would be strange if it were not so!), But they themselves emphasize their limited nature. So, on the whole, we are still observing the research process with a very poor source base. And lovers of truth in the "last resort" can be added - and it is always "somewhere out there"!

PS I don’t know how anyone, but I personally found it difficult to read and translate Bulgarian texts, although the Bulgarian language is in many ways similar to Russian. It turned out to be easier to take and read the English-language sources, which in this case are recommended in the list of references.