Teachings Sea Breeze 2019. Routine or cause for concern?

July 8 2019
12
On July 1, the Sea Breeze 2019 international exercises started in the western part of the Black Sea and at the training grounds of the closest regions of Ukraine. Until July 12, servicemen of 19 foreign countries will work out cooperation in solving various combat training tasks. Maneuvers will take place on land, on water and in the air. The actions of foreign armies are watched by ships, aviation and coastal troops of the Russian naval fleet. 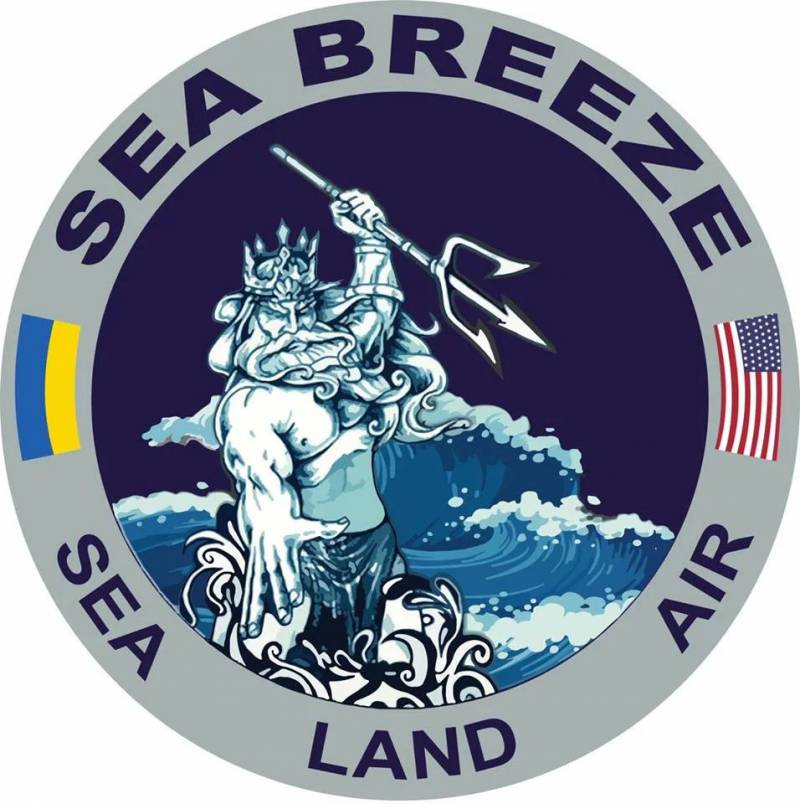 Teachings and their participants

This year, 19 countries are participating in Sea Breeze exercises - primarily NATO member states from the Black Sea region. The maneuvers involved 30 ships from several countries, as well as over 20 airplanes and helicopters. The participating countries sent about 3 thousand troops. Of which approx. 900 man and various land weapons and equipment will be involved in land episodes.

The largest groups represented the United States and Ukraine - several hundred people from each country, airplanes, helicopters, ships and boats. Canada, the UK, Turkey and other countries are taking a significant part. They are represented by naval and land units.

The main events of the exercises are unfolding in the western part of the Black Sea and at the mouth of the Danube. In addition, some episodes of the exercises will be held on the landfills of the Nikolaev, Odessa and Kherson regions. The other day, the Ukrainian side reported that the plan for the Sea Breeze exercise had to be adjusted at the last moment - one of the alleged sea polygons was busy because of certain actions by Russia.

The official task of the exercise is to work out the interaction of the countries of the Black Sea region and NATO as a whole. The armies of the 19 countries must jointly solve combat training missions at sea, on land and in the air. However, there are grounds for suspicion of having unnamed plans.

Features of the exercises

Sea Breeze maneuvers have been held since the late nineties, and their legend has not undergone major changes. In addition, each time there are certain innovations - organizational, technical or other nature. This year, the exercises also have interesting features. 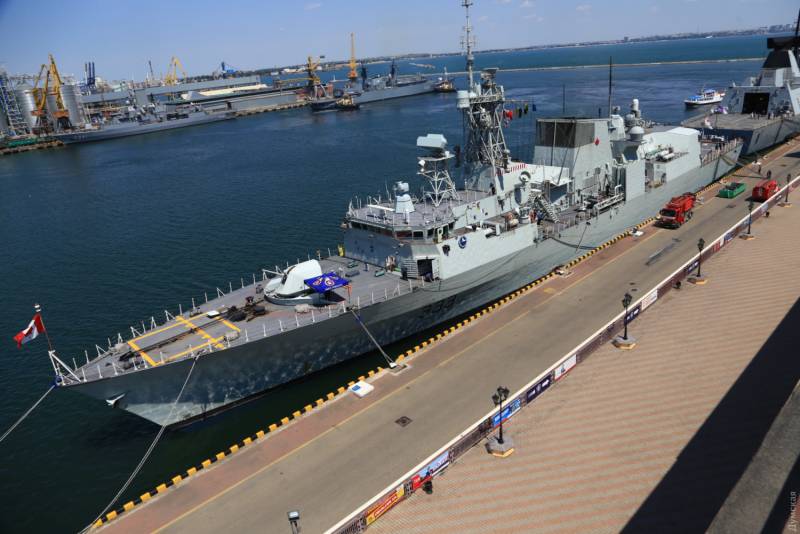 First and foremost, attention is drawn to the episode of the teachings on the Danube. First time in stories Sea Breeze maneuvers will not only be on the sea, but also on the river. According to the exercise scenario, the conditional enemy took up positions at the mouth of the Danube and blocked access to the sea. Ukrainian troops will have to strike at the enemy and ensure the conduct of transport vessels. It is noteworthy that other countries do not participate in this episode.

The composition of the naval group of the US Navy is interesting. If the presence of the USS Carney destroyer (DDG-64) of the Arleigh Burke type is expected and even customary, then one of the support vessels attracts attention. The US Marine Corps arrived in Odessa on a Spearhead / EPF high-speed expedition vessel USNS Yuma (T-EPF-8). This is the second time that a ship of this project arrives in the Black Sea to participate in maneuvers. In the current exercises he will have to solve various transport problems.

The patrol boat P-23 Ochamchir of the coast guard of Georgia has become an interesting novelty of the exercises. This representative of the Island project had previously served in the US, and last fall - after a long wait - was transferred to the Georgian side. The Sea Breeze 2019 exercise is the first major event involving the Ochamchira boat.

The main forces involved in the exercises are NATO countries. Ukraine, which provides its landfills, involves a relatively large land force, but the air force and naval components of the combined forces are mainly formed by foreign armies.

Otherwise, current exercises do not stand out against the background of previous activities in the Black Sea. Ground units attack a conditional enemy at coastal test sites, while aviation supports other branches of troops. Ships must also shoot using all available weapons. The result of such measures, obviously, will be reports on the successful destruction of the conditional enemy and the performance of the assigned combat missions. 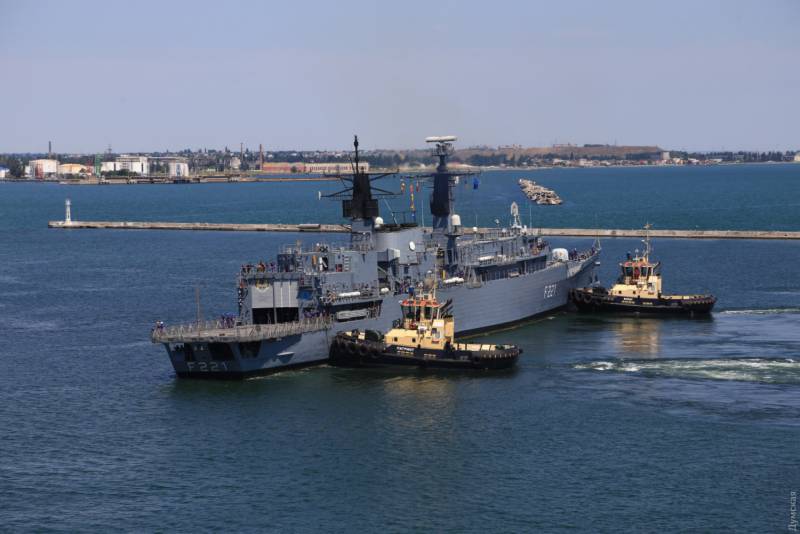 The land and sea episodes of Sea Breeze 2019 will be held until July 12. After this, the headquarters of the exercises and the command of the participating countries will begin to summarize and analyze the results obtained. What conclusions will be drawn from the results of the exercises and how they will affect the combat training of 19 armies is not yet completely clear.

The activities of NATO and other countries near our borders provoke a clear reaction. Russia is expected to take the necessary measures. 1 July, the Russian Ministry of Defense reported that the Black Sea Fleet monitors the actions of foreign ships in order to quickly respond to possible abnormal situations.

At the same time, control began at the stage of preparation for the exercises. From the moment of entering the Black Sea, foreign combat units fall into the area of ​​responsibility of coastal, ship and aircraft radar stations. For example, the destroyer USS Carney (DDG-64) had to go to Odessa, accompanied by the patrolling "Sharp".

All actions of the participants in the maneuvers are constantly monitored and analyzed. In addition, foreign exercises are used as a convenient reason for practicing actions in conditions as close as possible to those in action. Calculations have the opportunity to test and improve their skills in detecting and tracking real and actual surface or air targets.

The Russian side is observing, but does not interfere in the course of foreign combat training activities. However, according to the Ukrainian command, the headquarters of the exercises had to work further due to the unexpected closure of one of the regions.

According to official data, the main result of the Sea Breeze 2019 maneuvers will be the increased level of training of the troops and units involved. In addition, two dozen countries once again have the opportunity to work out the interaction in real conditions. The benefits of this are obvious. 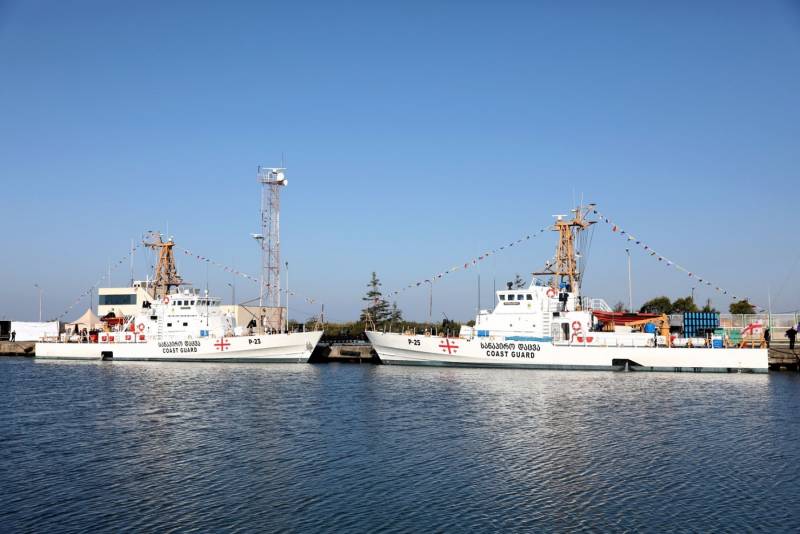 The political side of current exercises is also obvious. Against the background of the observed cooling of international relations, the next maneuvers near the Russian borders do not look the best and can be perceived as an unfriendly step or even as a hidden aggression. This perception of the exercises is facilitated by the presence of countries that are not directly related to the Black Sea region, but are in NATO.

Attention is drawn to the first episode in the history of Sea Breeze with the training of actions on the river, in which, moreover, only the Ukrainian side is participating. The question of the real goals of such an event remains open. The specific policy of Kiev and the statements of the military leadership of Ukraine allow us to consider this episode of exercises in a negative way and become a reason for suspicion.

However, the current teachings of NATO and friendly countries are not something new, unexpected or worthy of special attention. Such events are held regularly, at different frontiers of Russia and with the participation of various countries. Russian armed forces know how to respond to foreign exercises and what to do when they start.

Now the Black Sea Fleet, using all available means, monitors the activity of foreign countries, but does not interfere. Careful observation of the actions of NATO, Ukraine and other countries will allow you to collect all the necessary data, on the basis of which you will then draw your own conclusions. Our armed forces will be able to assess the real capabilities and capabilities of foreign armies, and then adjust their construction and training plans accordingly. In addition, it will be possible to assess the risks of a political nature.

Thus, our country can safely observe the teachings of Sea Breeze 2019 and draw the necessary conclusions. Any suspicious or aggressive actions of third countries need to be taken into account and take action. Thanks to this, the Russian army will know the potential of foreign countries and will be able to plan its development in accordance with actual challenges. In other words, foreign exercises will benefit our security.