Russia can increase its share of the global armored car market in case of proper support from domestic manufacturers. 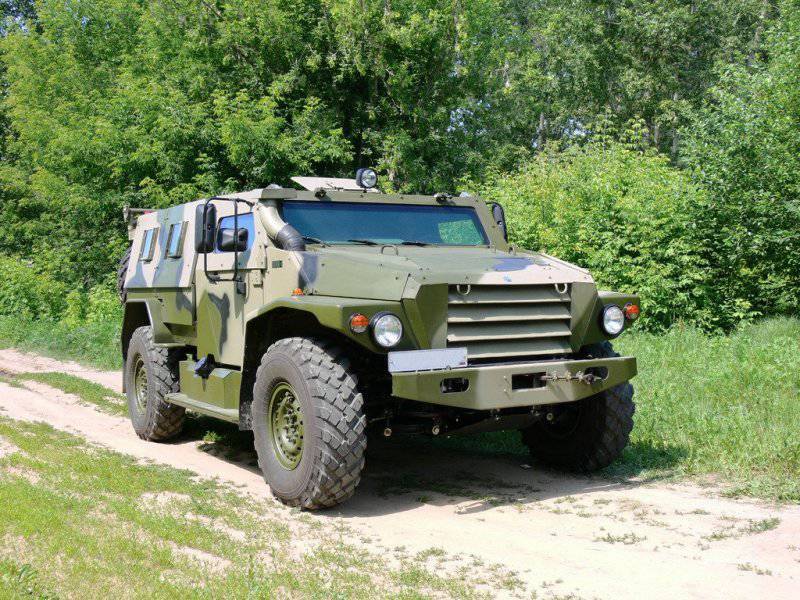 For domestic manufacturers, this dynamically growing segment is of great interest, since Russia is just beginning to “make its way” into this market. So far, Russia's presence in this segment of the world market (as opposed to the categories of MBT and armored combat vehicles) is very modest. By period 2008-2015 TsAMTO estimates Russia's share in this market segment in 2% by quantity parameter and 0,6% by value supply volume.

According to TSAMTO, in the upcoming 4-year period (2012-2015) the volume of export sales of new armored vehicles on the world market will be at least 8834 units. in the amount of 4,16 billion dollars in the case of meeting delivery schedules for current contracts, stated intentions and tenders.

This figure is summarized over the 2012-2015 period. it will be significantly higher, since TSAMTO cites statistics on the current global order book for the current moment, and the armored car market is different in that the period from the moment of the conclusion of the contract to the actual supply (due to the specificity of manufacturing) is quite small. However, the result for the 2012-2015 period. Expected lower than 2008-2011. First of all, this is due to the possible temporary glut of the market due to the US intention to sell or "transfer" to a number of countries of the Middle East and Central Asian regions a significant part of the armored vehicles in service with the US military contingent after the withdrawal of troops from Iraq and Afghanistan. Nevertheless, even if the United States implements these plans, the market glut factor will be short-term and will affect the decline in global demand for new armored cars only for 2-3 years. In general, for the future, this segment will be the most dynamically developing among all categories of armored vehicles.

According to TSAMTO, in the past 4-year period (2008-2011) the world has been exported or manufactured under a license of at least 21960 new armored vehicles in the amount of 9,5 billion dollars.

In total, 22900 armored vehicles worth 9,57 billion were exported during this period. At the same time, sales of new armored vehicles accounted for 95,9% of the total number or 99,3% of the value of global shipments.

According to TSAMTO, the “new” category includes deliveries of new armored vehicles worth at least 0,1 million dollars, licensed programs, as well as deliveries from the Armed Forces of exporting countries upgraded to practically new machines with an extended service life, the price of which is more than 50% of the cost of a new armored vehicle of the same type for the same period of time.

The group of "armored vehicles" ("armored vehicles") is mainly comprised of armored vehicles with the wheel formula 4х4. The same group includes combat reconnaissance vehicles, armored trucks and other vehicles, which cannot be categorized by their weight and size characteristics as “combat armored vehicles”. To the lower limit of the class attributed to the American armored SUV "Hummy".

In the rating below, exporting countries are ranked by the number of armored vehicles supplied and planned for delivery. A number of countries have orders with a deadline outside the period under review (2016 year and beyond). This analysis takes into account only those shipments (including those under long-term contracts) that are planned for the period up to and including 2015.

Top in the ranking of suppliers of new armored vehicles for the period 2008-2015. with a large margin from the competitors is the ideological integrator of the use of machines of this class - the United States (17970 machines worth 5,86 billion dollars). In the first four-year period, 14515 machines were exported to the amount of 4,594 billion dollars, the order book for 2012-2015 was delivered. currently 3455 new machines worth 1,265 billion dollars. Exports in both periods are mostly provided by the supply of armored vehicles to the troops of the coalition countries for use in Iraq and Afghanistan.

Third Place in the ranking is Italy with armored cars of Iveco (2586 vehicles worth 1,683 billion dollars). In the first four-year period, 910 armored vehicles worth 689 million dollars were shipped for export, a package of orders for 2012-2015. is 1676 new machines in the amount of 994 million dollars (a significant part of this package falls on the supply of commissioned by the Ministry of Defense of Russia).

Fifth place with a large family of products offered in this segment occupies the UK (662 machines worth 318,3 million dollars). In 2008-2011 579 armored vehicles worth 232,9 million were exported. Order portfolio for 2012-2015 while is 83 units. in the amount of 85,4 million dollars. It should be noted that the UK, which actually owns enterprises in the United States and South Africa, is one of the world leaders in the production of armored vehicles, but TSAMTO, according to the accepted methodology, refers the export of products to the country in which the product was developed and manufactured.

Sixth place Russia occupies mainly with the Tiger armored car (654 vehicles worth 80,3 million dollars). In the first four-year period, 204 armored vehicles worth 26,3 million were exported, the projected supply volume for 2012-2015 was. can be up to 450 new machines in the amount of 54 million dollars in the case of the implementation of agreements with China, which is currently the largest customer of Tiger armored cars.

Eighth place occupies Germany (500 machines in the amount of 587,2 million dollars) mainly with armored vehicles "Dingo-2" and "Fennec." All deliveries were made in the first four-year period.

It should be noted that in the “tender” category, the results of which have not yet been announced, in the reporting period (2012-2015) the volume of deliveries (in case of compliance with the stated schedules) is expected in the amount of 1952 units. worth about 864 million dollars, which may to some extent affect the position in the ranking of the world's leading exporters of armored vehicles.

Fully report on the global market for new armored vehicles for the period 2008-2015. will be published in the World Trade weapons»No. 6.