The foggy future of the Russian "Altair"

Be-200 masters the sky and water

Flight readiness of the first instance of the amphibian Be-200 reached only by the fall of the 1998 year, two years after assembly. In many ways, this delay was due to financial problems both at the enterprise-developer in Taganrog, and at the Irkutsk IAPO. Nevertheless, the crew of test-pilot Konstantin Valerievich Babich lifted for the first time into the air the jet flying boat 24 in September 1998 of the year. It happened at the airport IAPO in 16.50 local time with the observance of all precautions. The fact is that a year earlier there was a terrible catastrophe of An-124, which on takeoff fell on residential buildings in Irkutsk. For this reason, it has been forbidden to take off from the factory airfield towards residential areas. The first flight of the Altair took place within 27 minutes and was accompanied by the related Be-12P, from which the photo and video was taken. Turboprop amphibious drove for the sake of such a solemn occasion in Irkutsk from his native Taganrog. 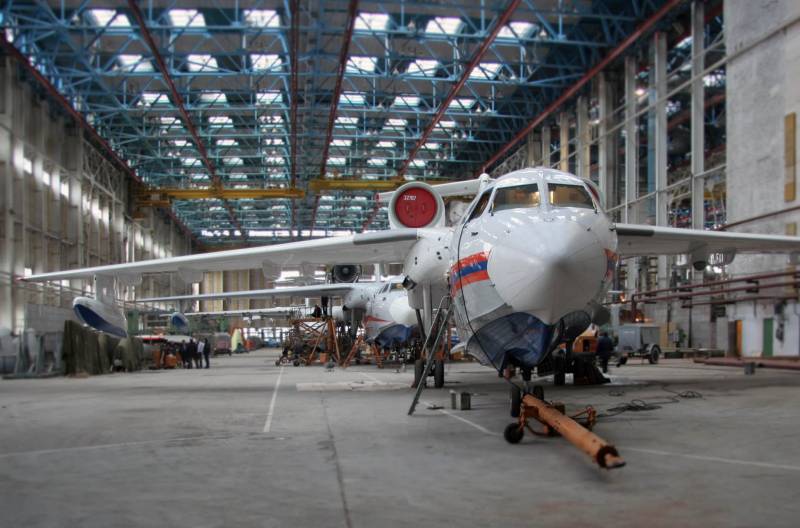 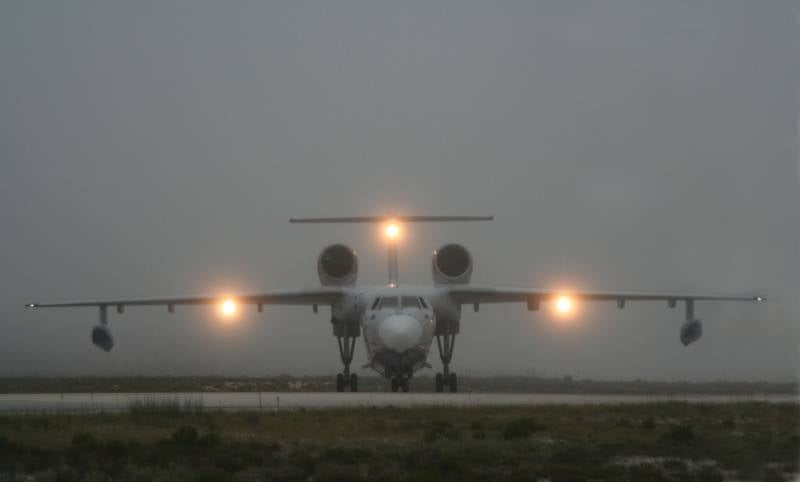 It must be said that for the Irkutsk aircraft factory the production of such a specific machine as a jet flying boat was in its own way a unique project. Many of the Be-200 assembly and design techniques were borrowed from the shipbuilding industry. The problems that arose had to be solved jointly with specialists from Taganrog, sometimes working in three shifts. Therefore, waiting for the unusual machine was waiting with impatience - a huge number of people gathered at the airport.

“The first flight is the“ birth ”of a new aircraft, an amphibious aircraft, a unique aircraft. The experiences were great - we all prayed that everything would be fine. And everything went well. It was a delight when the plane landed at the airfield in Irkutsk: people on the roofs of houses applauded, tens of thousands of people around applauded ”,
- recalls in an interview with General Designer Be-200 Gennady Panatov, which was discussed in previous part of the material. 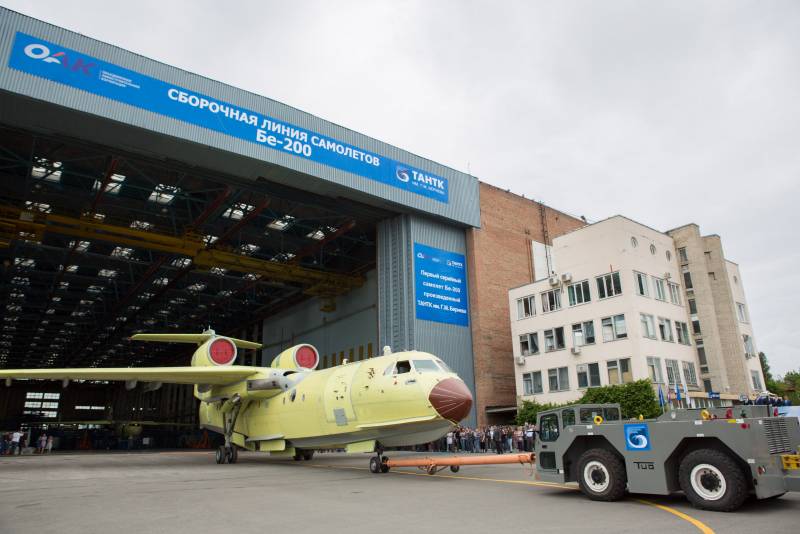 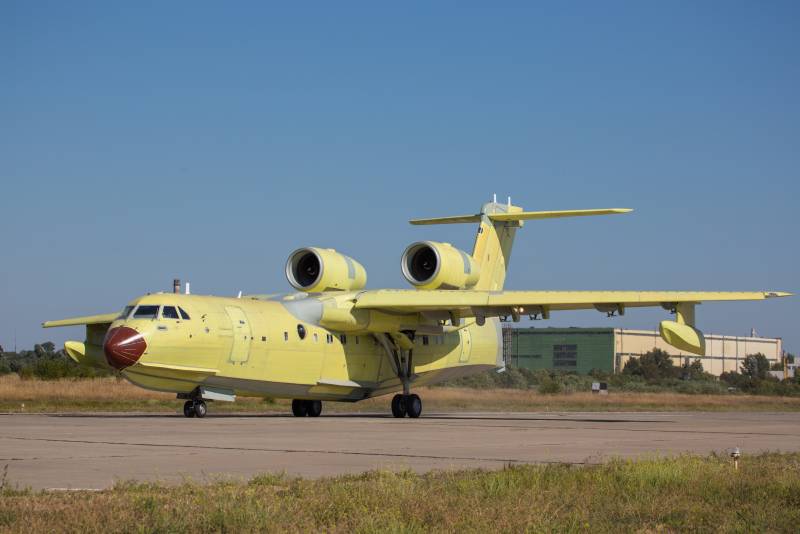 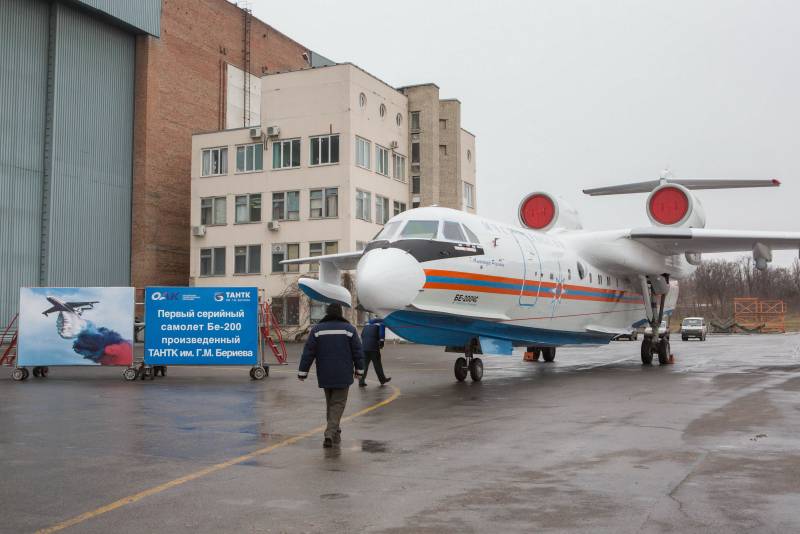 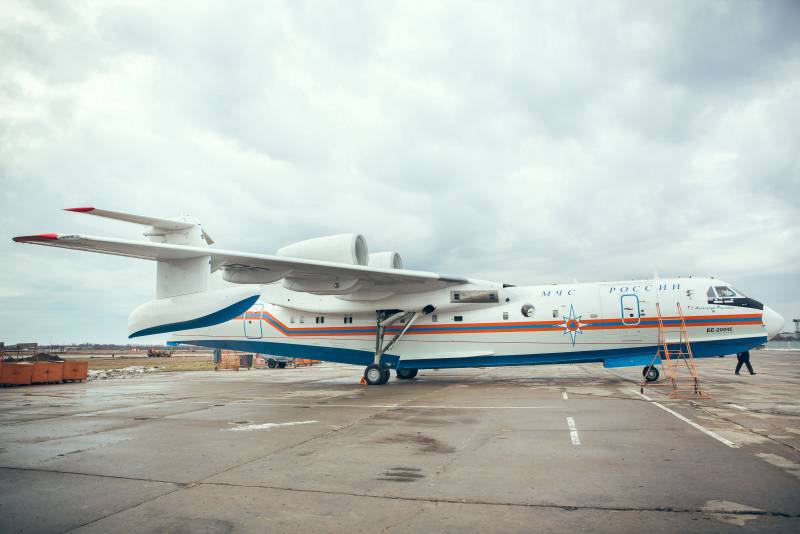 Before 17, October, several flights were made, a couple of which were only a demonstration of opportunities for guests and journalists at the official presentation of the aircraft. And at the end of April 1999, the first assembled amphibian under the registration number RA-21511 gathered on a long journey - across the whole of Russia to Taganrog. It is noteworthy that until the summer, the Be-200 was not tested for "seaworthiness", but 9 June was sent to 99 at Le Bourget, where he surprised the guests of the air show by dumping tons of water over an imaginary fire on 6.

For the first time I felt the water outside the fuselage of the Altair 7 July, and this experience was unsuccessful. The plane clearly lurched on the water surface, and also vigorously collected water through the gaps in the casing: in Irkutsk, it was not possible to comply with the requirements for tightness during assembly. The first problem was solved by installing larger floats on the edges of the wing from the old Be-12, and the fuselage was “caulked” by improvised means. All summer 1999, the plane only made test "heats" at high speeds in the waters of the Taganrog Bay - the design headquarters was in no hurry to test the takeoff from the water. And only 10 September machine performed its crown trick - soared and splashed down. By that time, it had already been decided to establish a center for the training of specialists in hydro-aviation for the needs of the Emergencies Ministry in Taganrog. The modification for extinguishing fires and service in the ministry was given the name Be-200ЧС - it will become the most massive in the future.

The general public took off and landing "Altair" showed at the September Third International Exhibition "Gidroaviasalon - 2000" in Taganrog. At the same time, the Be-200 distinguished 24, world records in the classes of seaplanes and amphibians in the time of climb 3000, 6000 and 9000 meters without cargo and with ballast in 1, 2 and 5 tons. In total, by the 2009, the Taganrog rocket amphibian broke the 42 world record. 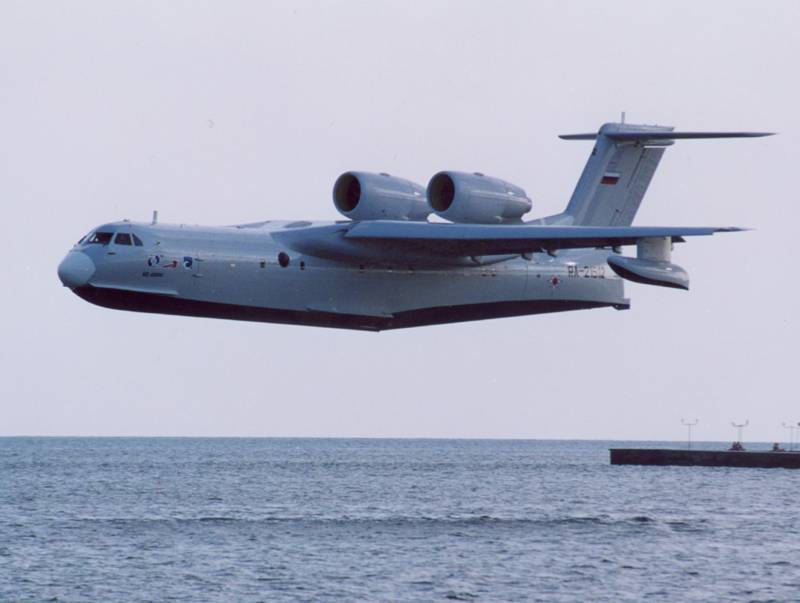 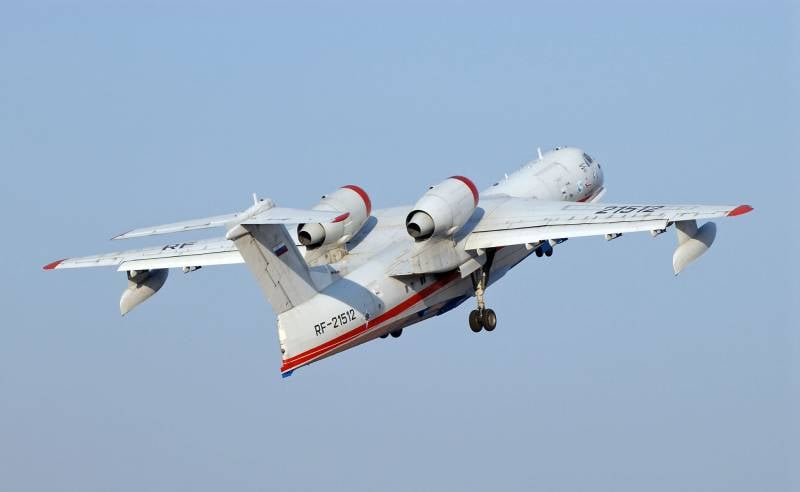 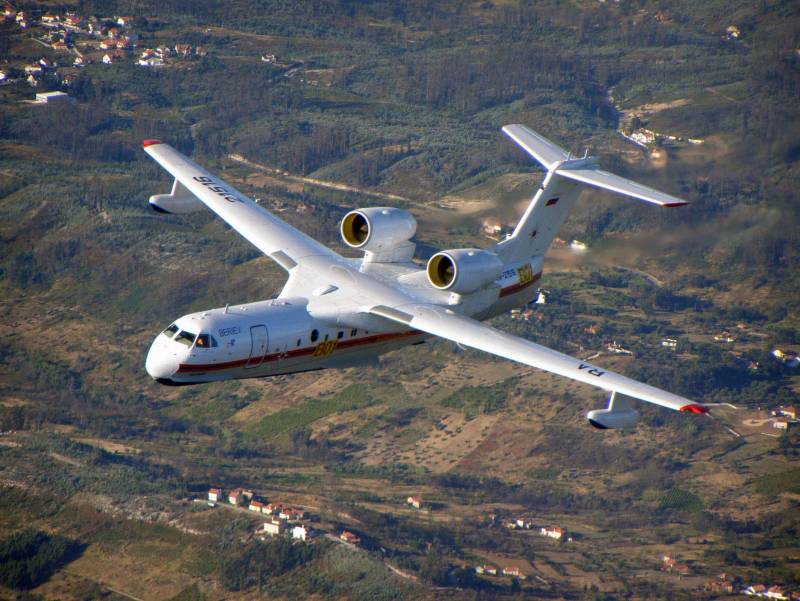 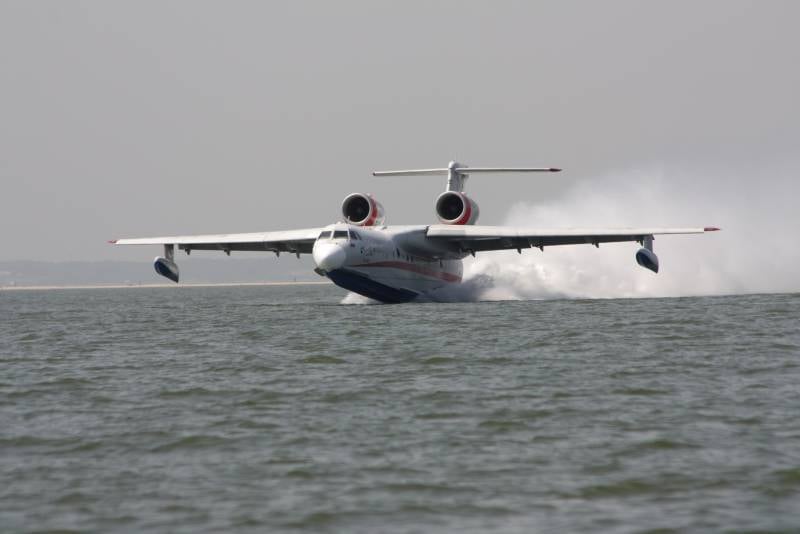 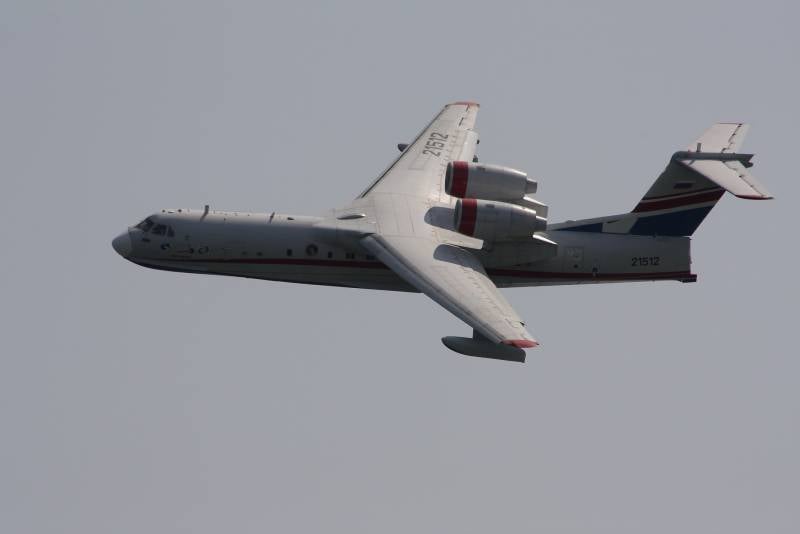 A full-fledged window into the sky for the Be-200 opened in August 2001, when Gennady Panatov was solemnly presented with a certificate of the limited category type. For this, the car had to make an 223 flight with a touch of 213 hours. Determined with the customer. General Designer of the OKB Beriev recalled negotiations with the head of the Emergencies Ministry Sergey Shoigu:
“I called him, said that there is such a plane that is perfectly suited to perform the tasks assigned to the Emergencies Ministry. He flew to Taganrog, examined the aircraft, said that the Emergencies Ministry would take all measures to launch the aircraft into the series. He achieved the Russian government to allocate money for the construction of the first five production aircraft Be-200. That's how life began Be-200 aircraft. "

At the start of the 2000, the year the Be-200 traveled extensively around the world. The amphibious aircraft traveled to Malaysia, South Korea, India, the United Arab Emirates, Turkmenistan, France, Greece and Germany. The car invariably attracted attention with a spectacular water abstraction in gliding from an open pond and discharge in front of the audience of the show. Extreme testing for the Taganrog machine became tests in 2002 in Armenia, when they evaluated the capabilities of the aircraft to operate in the highlands. Gyumri airfield and Lake Sevan, towering above sea level by more than 1500 meters, became the grounds. 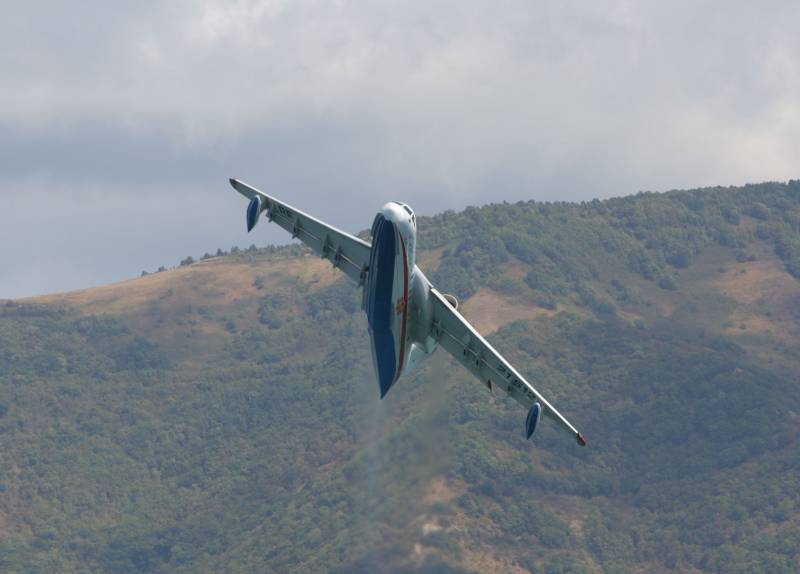 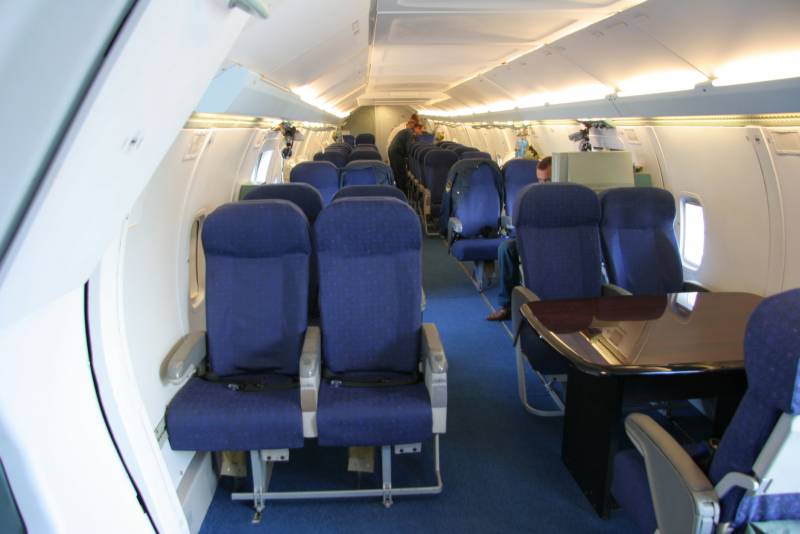 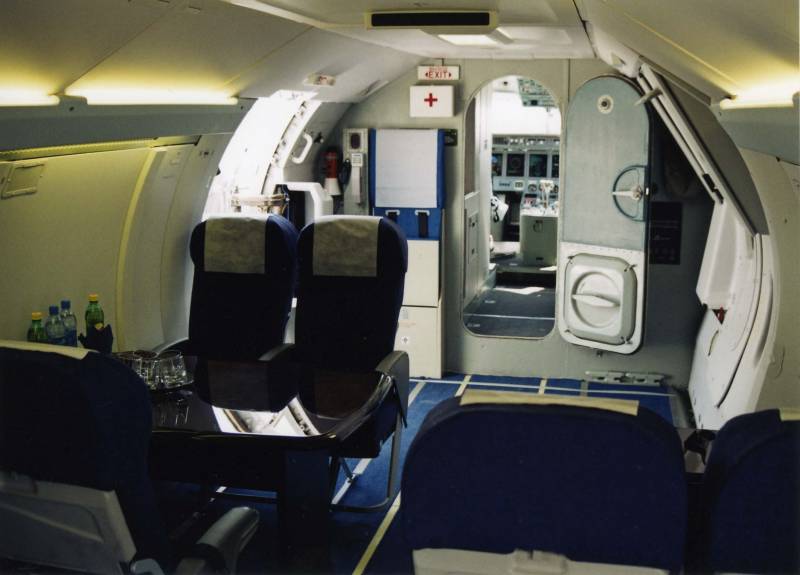 The second flight copy of the amphibian was the Be-200ES in the specification for the Ministry of Emergency Situations and under the number 7682000003, which rose into the sky of Irkutsk 27 in August 2002 of the year. Outwardly, there was no particular difference between the aircraft and the “number one” - only an elegant livery and two blisters. Inside, an upgraded ARIA-200М onboard flight-navigation system, new EDSU and SPU-200 ЧС systems, external sound notification system SGU-600 and searchlight SX-5 appeared. Two observers were added to the crew, whose jobs were located near those blisters. Undoubtedly, the onboard surveillance system AOS (Airborne Observation System), an electronic-optical thermal imaging system operating in real time, allowing monitoring of the underlying surface (earth and water) at any time of day and in all weather conditions, became the highlight of the Be-200 for the MES. . Most of the equipment for the Be-200ChS was produced abroad: in the USA, Great Britain, Israel, Germany and Switzerland. The D-436TP engines, we recall, were produced at Motor Sich in Zaporozhye. Obviously there is nothing to replace them in Russia now, so before the 2021, the plans are to install SaM146 from the domestic SSJ-100. Naturally, adapted to the seas. Only here in Russia such an engine is not fully assembled - the hottest and most problematic part is manufactured by the French company Snecma. 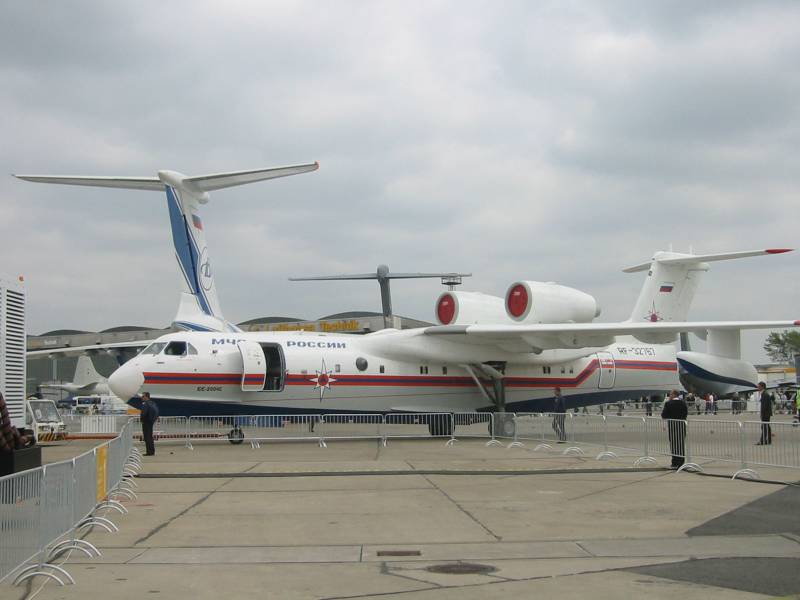 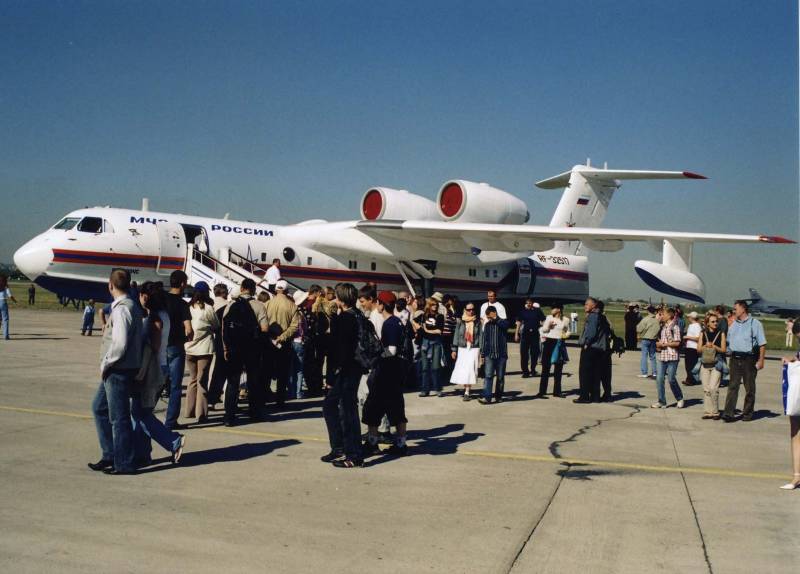 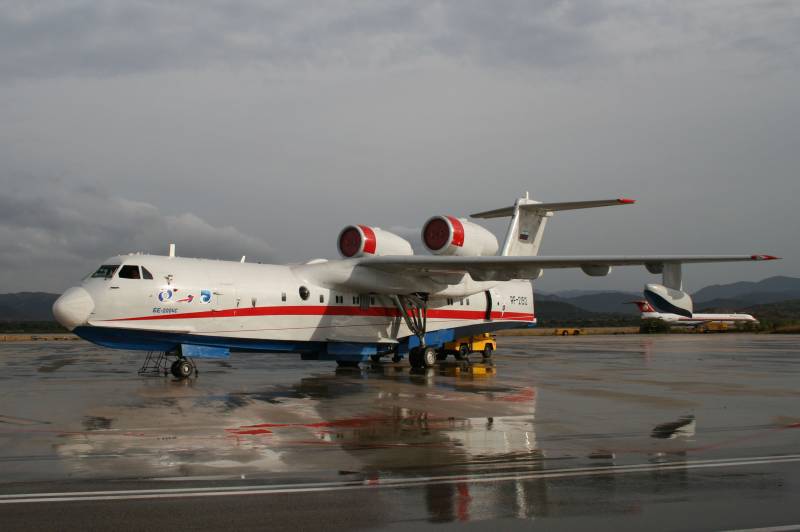 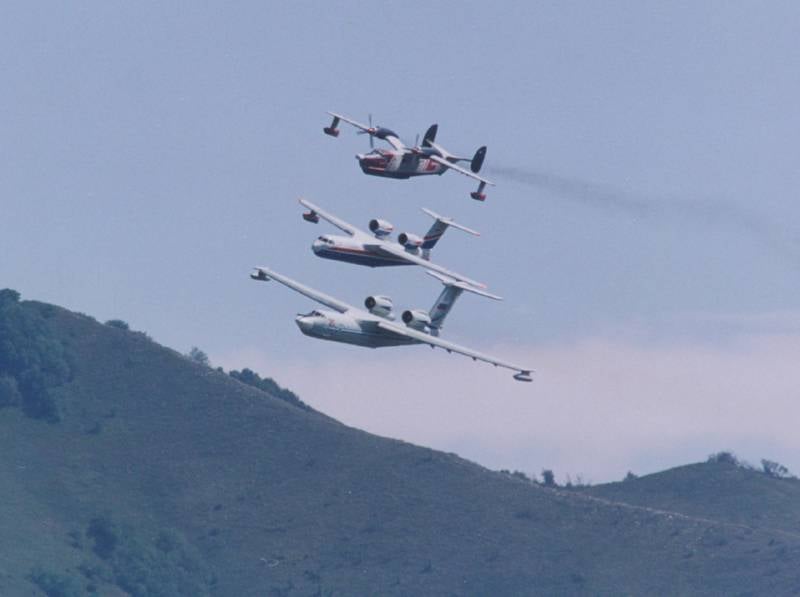 Since then, the Be-200 ЧЧС has managed to work in many hot spots of the planet, dumping hundreds of tons of water on forest fires. The latest copy of the Taganrog amphibian for the Ministry of Emergency Situations has received 7 September 2018, and now the total staff of the department has 9 winged machines. It seems that the ministry is satisfied with the machine: the head of the Southern Regional Center of the Russian Emergencies Ministry, Igor Oder, put it on the amphibian:
“In the opinion of pilots, these are unique, good, modern, reliable and powerful machines that help put out fires. The geography of their use is very wide. ”

One Be-200ČS was purchased by Azerbaijan, and five more countries are now in the process of ordering. Is the machine successful and efficient? Not so simple.

In addition to the obvious problem with Ukrainian engines, which, for obvious reasons, will someday end, in the professional scientific community in the last decade the idea has been expressed about the unacceptability of using Be-200 aircraft to extinguish forest fires. And this applies not only to the Taganrog machine - the problem is common to all such machines. The main reason is the insufficient density of the water flow that aircraft such as the Be-200, CL-412, IL-76 or even the American giant Boeing-747 bring down on a burning forest. The coefficient of beneficial use of water in cases of "carpet" extinguishing does not exceed 1-2%, and financial costs are huge. Actually, always in the reports on the fire aviation we read about the localization of forest fires, not about extinguishing. The plane simply “spreads” precious water in a narrow strip, only nailing fire for a while.

Calculations show that small-area forest fires in 500-600 m2 It requires 5-6 airplanes to extinguish (and not localize) immediately, and only 10 minutes later. Nowhere and never will such efficiency and mass character be realized. In Russia, with the existing pattern of dislocation of airfields and water bodies suitable for refueling seaplanes and amphibians in the gliding mode, the approach time to the outbreaks is measured in hours. Extinguishing with the Be-200 is very expensive - a 1-liter of water costs 5-10 times more expensive than in a fire-fighting helicopter. At the same time, the cost of the Taganrog amphibian is about 47 million dollars against 4-6 million for Mi-17 or Ka-32. And the helicopter also uses water more efficiently - up to 6% directly extinguish the fire (for the Be-200 1-2%). And in specific modes of hovering with the use of fire assault troops, proposed by Dr. Abduragimov Iosif Mikaelevich, a specialist in the field of combustion physics, the water utilization rate of a fire extinguishing helicopter can rise to 50%! It is easy to calculate how much fire helicopters can be bought instead of the Be-200ES fleet from 9 machines that the Emergencies Ministry currently has. And before 2024, 24 amphibians, which are already assembled in Taganrog, were ordered. One has only to imagine what will happen to the Be-200 if the scientists succeed in overcoming the conservatism of Avialesuhrana and the Ministry of Emergency Situations in the method of forest extinguishing! Although this does not negate the fact that the amphibian from Taganrog is the best car in the world in its class. It remains only to find her worthy use.

Based on materials
Tass.ru
Yakubovich N. All aircraft G.M. Beriev.
Valuev N. Track in the sky. History Irkutsk Aviation Plant from Antonov to Yakovlev.
Zabolotsky A.N., Salnikov A.I. 75 years TANTK them. G. M. Beriev.
Abduragimov I.M. The purchase of a new batch of Be-200 is another mistake of the Ministry of Emergency Situations of the Russian Federation. Magazine "Fire and explosion safety", 2012 year.