In Komsomolsk-on-Amur, two IRCs of the 22800 project for the Pacific Fleet were laid

July 1 2019
61
In Komsomolsk-on-Amur, the construction of small missile ships of project 22800 Karakurt for the Pacific fleet. At the Amur Shipyard today laid the first two MRCs of the "Pacific Series". 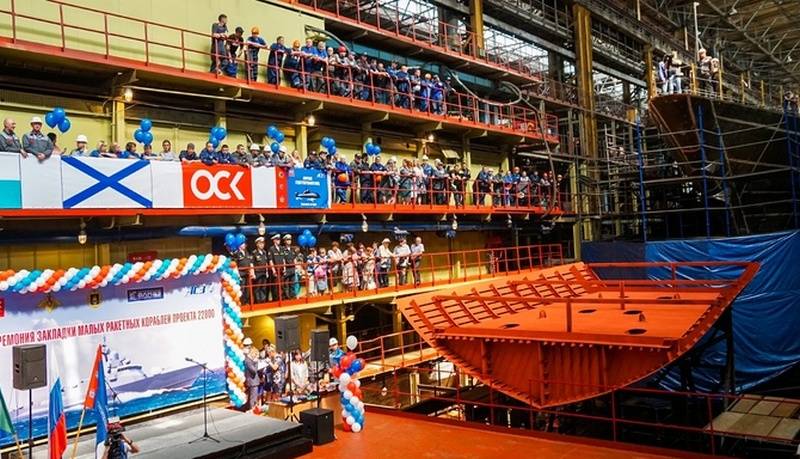 The solemn ceremony of laying the first two IRCs of the 22800 project for the Pacific Fleet took place today at the Amur GCC. Pledged ships received the names of Russian cities "Rzhev" and "Udomlya" and became the 12-m and 13-m serial ships of this project. The ships were laid within the framework of the contract concluded by the 22 Ministry of Defense August 2018 of the year for the construction of six small rocket ships for the Pacific Fleet. The agreement provides for the construction of four IRCs at the Amur GCC and two more at the Eastern Shipyard in Vladivostok. The last MRK of the Amur series should be commissioned in 2025, the Vladivostok series - in 2022.

As previously reported, two more IRCs, Pavlovsk and Ussuriisk, will be laid down at the Amur GCC by the end of this year.

The ships are equipped with M507 diesel engines produced by the St. Petersburg plant "Zvezda". It was precisely because of the disruptions in the supply of diesel engines that the deadlines for the delivery of IDCs of this project, being built at the Pella CVP for the Baltic Fleet and at the Zelenodolsk CVD for the Black Sea Fleet, were repeatedly shifted to the right.

Ctrl Enter
Noticed oshЫbku Highlight text and press. Ctrl + Enter
We are
Ministry of Defense reported the start of construction of the 22800 project for the Pacific FleetThe second IRAs project 22800 "Sovetsk" went on sea trials
61 comment
Information
Dear reader, to leave comments on the publication, you must to register.