"..and our tanks are fast," or Ukraine is the eternal daughter-in-law 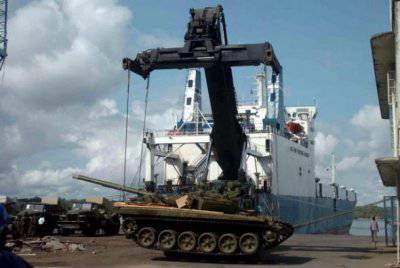 Amnesty International reported with traditionally mournful sadness that in South Sudan, the government army is using purchased from Ukraine Tanks for shelling civilian targets. And she clarified: “The secret deliveries of these battle tanks from Ukraine to Sudan in 2009 were carried out through Kenya and Uganda by transport companies from Germany, Ukraine, Britain and companies registered on the Isle of Man.” Such a crafty clarification, even with factual errors, follows say, human rights defenders do not face without fear and reproach, but all in order.

Who is fighting now in South Sudan, still a fresh state (July 2011) after the partition of the largest country in Africa? The government army (more recently, the People’s Liberation Army of South Sudan) with the Allies again recently - the Liberation Army of South Sudan and the Democratic Army. What unhappy with the recent allies in the struggle (almost 50 years) for separation from the North? The fact that President Salva Cyrus preferred the formation of the ruling establishment to the natives of the Dinka tribe. The oppositionists are serious - they promise to “burn the fire so badly that Salva Kier will flee to Kenya, where he has already bought two villas for his family.” Separately, in the statements of the opposition gets the United States - the patron of the government, and the American business warns about the disastrous consequences if he intends to invest in South Sudan "before the final liberation of the revolutionary forces from the tribal dictator."

In parallel, it should be noted, the government army of Southern Sudan fights with the army of the Sudan of the north because of the disputed region of Heglig, where 75% of all oil reserves that had withdrawn after the division of the north Sudan are concentrated.
The fact that the southerners have tanks from Ukraine, was never a secret. In particular, from the sad memory of the Faina cargo ship captured by Somali pirates in September 2008. Then very quickly the press got a copy of a cargo declaration stating that the final recipient of tanks, anti-aircraft guns and grenade launchers is the government of Southern Sudan. Officials of Ukraine and Kenya in unison screamed that the contract was concluded only between them as part of the program to rearm the Kenyan army. And the annoying GOSS abbreviation that comes across in the text (by that time, the familiar and decoded by everyone only Government of South Sudan (the government of South Sudan) is just an abbreviation of some economic department in the Kenya Ministry of Defense ... In 2010, the release of secret The dispatch from Wikileaks gave a complete picture of what actually happened before, during and after the capture of Faina.

Two days after the capture of Faina by the pirates, then US Secretary of State Condoleezza Rice sent dispatches to the embassies in Ukraine, Russia and Latvia setting the task of finding out what the reaction of these countries could be if the Americans sink Fainu (from 21 person 17 crews had Ukrainian citizenship, 3 - Russian and 1 - Latvian). It was supposed to launch the cargo ship to the bottom with all the equipment and people under the noble excuse not to let it fall weapons Islamists from the Al-Shabab movement in Somalia. Outwardly, it looks logical, but it does not stand up to check: trying to pirates to bargain with the Islamists is a dangerous business, because they will not just take the goods for nothing, but also behead them for godless business, which they consider to be a pirate craft. A more reasonable version seems to be that Washington was concerned about the danger of disrupting peace agreements between the Sudanese government in Khartoum and the rebels of the South 2005, under which the South gained autonomy and the right to hold a referendum on full independence six years later. It has never been a secret that the USA supported the southerners in all the years of the war with money and weapons. In the latter, zeal was also shown by Israel - it is therefore not an accident that a ship was chosen to transport Ukrainian weapons, whose owner was a former citizen of Odessa. At the same time, official Khartoum was the sworn enemy of the United States: Sudan was constantly on the list of countries "supporting international terrorism." Back in 1998, wanting to divert public attention from the investigation, how and how Bill Clinton Monica Lewinsky trained at the Oval Office, the President gave the order to bomb a pharmaceutical plant in Sudan, which provided almost all of Africa with medicines - under the pretext that there, they say that chemochat with weapons of mass destruction. Without leaving a whole brick in place of the plant, they did not find anything forbidden there. But the benefit was tangible. Who do you think came to the African drug market? Right! At the beginning of 2000, save the Darfur! Campaign was launched (with George Clooney's face) accusing the government of Khartoum of “genocide” in the western province of Darfur. It was even possible to get in the International Criminal Court (by the way, the jurisdiction of which the United States themselves do not recognize) the arrest warrant for Sudanese President Omar Bashir. The “Darfur Campaign” was aimed not only at changing the government of Sudan - including through intervention, not only dividing the largest country in Africa into several subordinate states, but also ousting China from there, which had already become heavily dependent on Sudanese oil. And here it is impossible not to note the amazing flexibility of the Chinese: already on the eve of the independence of South Sudan they managed to establish mutual understanding with his government, they volunteered to build an oil pipeline - an alternative to the north, and also, according to the same message of Amnesty International, managed to arm the opposition with mines with which they now block the movement of government troops ...

But the Arab countries, first of all, the closest allies of the United States, always stood firmly on the side of Sudan. Therefore, the agreement on the division of the country was given as a result of exhausting negotiations and between them. Because of Faina, all of this could have been covered with a copper basin - Khartoum would have every reason to announce a violation of the agreement signed in 2005 with unpredictable consequences ... Interestingly, two months before the capture of Faina by pirates - in July - the US officials contacted the Ukrainians about the planned supply, and - it looks like this - strongly advised that the deal should be framed exclusively with Kenya, that is, God forbid, not to light South Sudan. Moreover, the Americans were well aware that a year earlier, South Sudanese had already left 67 tanks from Ukraine through the same Kenya! Moreover, Kenyans frankly dedicated their counterparts to plans for moving cargo from their territory - sometimes with the inclusion of Uganda - to the final consumer.

The new 2009 was replaced by the head of the White House. Barack Obama, as I remember, promised a new and fair policy in the Middle East and beyond, but did not blame all sins on his predecessor, but set about searching for daughters-in-law, who are categorically appointed guilty of all shameful things. As follows from the dispatches with the Wikileaks, the new State Department officials demanded that Kiev and Nairobi take over and even threatened with sanctions with an impressive justification: because they supplied weapons to Sudan, which is on the "list of countries supporting international terrorism." It seems logical: formally, South Sudan was still part of Sudan, with the government in Khartoum and the hated President Omar Bashir at the head. But Washington didn’t prevent it from doing the same within the framework of the announced program of “reforming the security sector of South Sudan”. There would be Ukrainian officials and a knock on the Washington guest with a finger on the forehead: “Isn't it crazy about a transatlantic flight?” But no, everyone listened dutifully and again swore - as stated in the message - “to remain a reliable partner.” Kenyans, however, due to natural naivety, babbled something: they say, how is it that your old Bush said that everything was all right, all the way, and you now say what is wrong, you, whites, will not understand. ..

After a statement from Amnesty International, Skorenko voiced a certain “source close to the state-owned company Ukrspetsexport,” who found a fig leaf for Ukraine-daughter in law - “the expired statute of limitations”, as he put it. What is interesting, did not begin to bring down the former - “orange” - power, they say, she got into trouble. Corporate solidarity works - every former power in this structure leaves a contract that brings in a year - officially - almost a billion dollars in profit. For such money, you can provide a homeland "in the bride" in!