August 10 2019
9
Airplanes and airships have their strengths and weaknesses, and therefore different options for combining two such structures are offered in order to obtain the optimal set of advantages. However, almost all such projects were not successful. For example, the American experimental aircraft Aereon III demonstrated its shortcomings, barely going to the test. 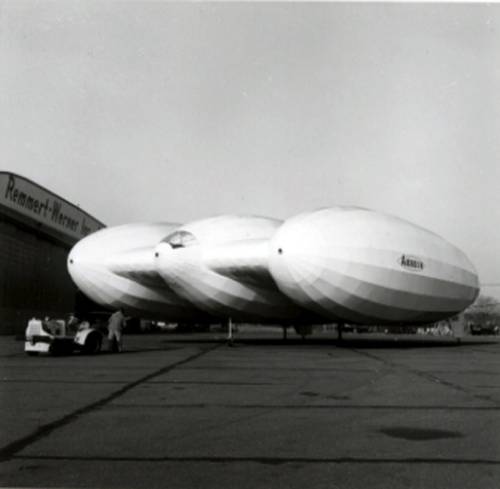 The idea is not new

The Aereon III hybrid airship project was proposed by the American company Aereon Corporation. This company was founded in 1959 by enthusiasts Monroe Drew and John Fitzpatrick. The latter took on the duties of chief designer. Design and construction work on the new aircraft was carried out in a rented hangar at the airport of Trenton (pc. New Jersey).

The project of two enthusiasts was based on rethought ideas of a hundred years ago. Back in 1863, the American inventor Solomon Andrews built aircraft called Aereon 1 and Aereon 2 (“Air Age”) - it was in honor of them that M. Drew and J. Fitzpatrick named their company. The idea of ​​the project of S. Andrews was to build a kind of airship without a power plant. It was proposed to control the flight using planes interacting with air currents. Two Epochs made several test flights, but showed limited capabilities, and therefore the idea was not developed.

After almost a hundred years, M. Drew and J. Fitzpatrick decided to implement S. Enryus’s ideas at a new technological level and with certain adjustments. They proposed a new design of a hybrid aircraft, as well as non-standard control methods based on the decisions of S. Andrews.

Limited resources and capabilities have led Aereon Corp. developed and built its own aircraft for several years. Only in the spring of 1966, the prototype was able to be removed from the hangar for flight tests. 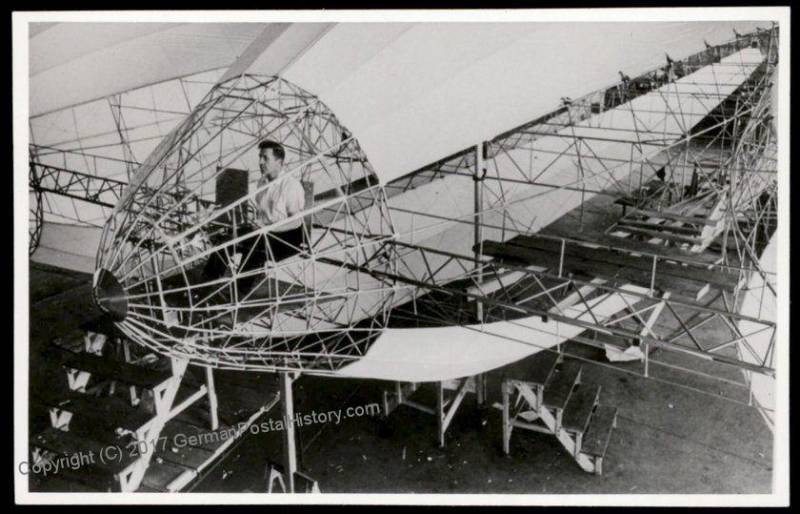 The bow of the device during construction. Photo by Germanpostalhistory.com

Aereon III was an aircraft of characteristic shape. The main structural elements were three shells of the type of a rigid airship. The shells were connected to each other with the help of hard jumpers, forming a kind of airplane wing. The aircraft frame was assembled from duralumin profiles and covered with two layers of synthetic fabric. Inside each shell there were six helium cylinders. It was argued that the resulting design was twice as strong as the infamous Hindenburg.

In the bow of the central shell provided a compartment with a double cockpit. In the tail there was a place for the power plant and other units. Between the shells in the tail was placed a horizontal stabilizer with a rudder; side shells equipped with lower keels. On these keels and under the center shell there were three landing gears. The front pillar was steered and controlled by the pilot.

Initially, the Aereon III project involved the use of a 80 hp gas turbine engine. The real prototype was a gasoline four-cylinder engine of comparable power. He had to rotate the tail pushing screw. A helicopter rotor in a swashplate was used; it was equipped with two blades and had a diameter of 6,4 m. The helicopter rotor had to provide horizontal flight and maneuvers at low speeds - due to changes in the total and cyclic pitch.

The experimental aircraft received an interesting flight altitude control system. It was proposed to rise or fall due to the heating of helium in the shells. Each of the “buildings” received five propane burners, as well as a duct system with fans. This made it possible to arbitrarily heat and cool helium, controlling the generated Archimedean force. The height management system was patented in 1965. 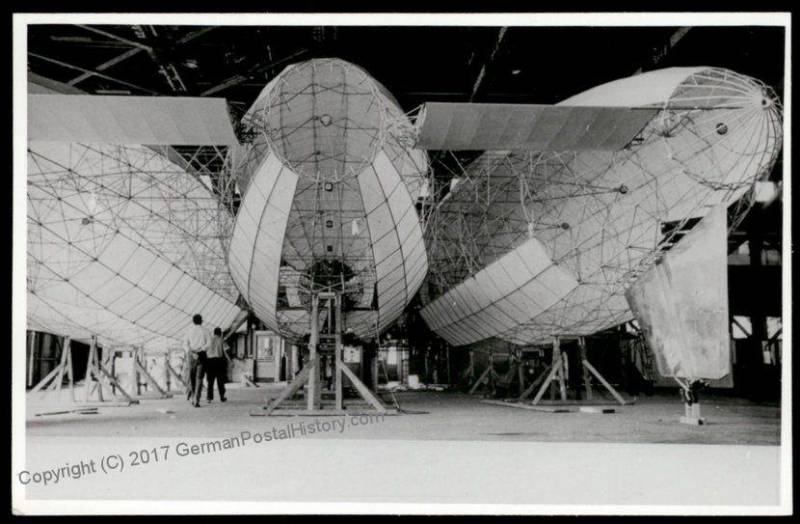 The unfinished tail of the machine. Photo by Germanpostalhistory.com

The finished Aereon III aircraft had a length of about 26 m and a maximum width of about 18 m. The diameter of each of the three shells reached 5,33 m. The internal cylinders contained 1100 cubic meters of helium. The dead weight of the structure was 180 kg and exceeded the lifting force from helium - therefore, the device could not take off by itself. Filling cylinders with helium at 80-83% of the volume and the use of gas burners made it possible to increase the lifting force of light gas. At the same time, the mass of the structure was compensated and an additional reserve of load capacity appeared up to 380 kg.

It was argued that the flight can be performed both with the help of a pushing propeller, and due to gravity and aerodynamics. In the latter case, the aircraft was supposed to gain altitude due to the heating of helium, and then cool the gas and plan with a decrease. The aerodynamic quality of the device reached only 0,74, but this could be compensated by the lifting force of the gas.

In the future, it was planned to build larger aircraft of the Aereon III type. It was a question of apparatus with a length of the order of 300 m with a nuclear power plant capable of remaining in the air for weeks and months. However, plans for the near future included the construction of more modest machines.

After a long and difficult construction, on 15 on April 1966, the prototype Aereon III was taken out of the hangar for testing. Tests began with a test of the power plant and taxiing along the runway. Having tested the device on the ground, the pilots had to lift it into the air. However, it didn’t reach flights.

During taxiing, an experimental aircraft encountered a problem in the form of a crosswind at a speed of 7-8 m / s. Due to the large windage and another gust of wind, the device could not brake at the end of the strip, and the pilot tried to make a U-turn. With this maneuver, the prototype leaned to one side and fell on two landing gears, lifting a third and exposing the bottom to the wind. One of the two pilots preferred to jump out of the cockpit, not waiting for the crash. After that, the wind turned the device over, and then the second pilot left it. Then the car made a second coup and stopped. 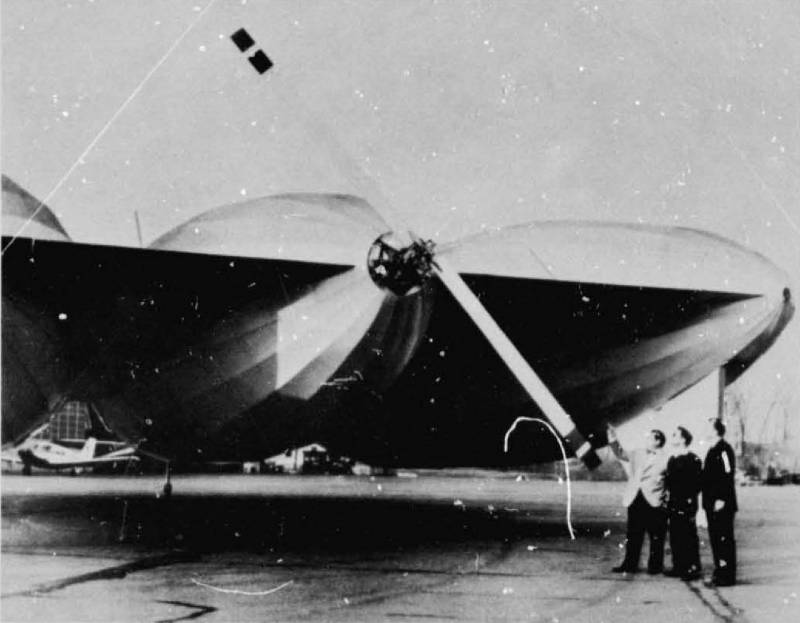 People escaped with minor injuries, but a fall to one side and two coups “through the roof” led to sad consequences for the device itself. The lightweight design could not withstand the shock and partially collapsed. The wreckage was transported to the hangar, and, according to some sources, the state of the aircraft allowed this operation to be carried out using a bulldozer.

For some time, Aereon tried to restore the aircraft of the same name, but it did not succeed. The accident of the first prototype put an end to all plans. Enthusiasts had to abandon the construction of new experimental airships, which are distinguished by their large size and weight.

According to various sources, the aircraft Aereon III finally ceased to exist in the 1966-67 years. Immediately after the failure of the first project, M. Drew and J. Fitzpatrick set about developing a new concept for a hybrid aircraft. This time he was supposed to be like a plane. The assembly of the new prototype was carried out in the same hangar in Trenton - using the available parts.

Part of the duralumin parts of the crashed apparatus was used again. Also used instrumentation cab and some other devices. Almost all other elements of Aereon III went to the scrap. As far as we know, only a small nasal section of one of the shells has survived to this day. Now it is stored in the collection of the aeronautics club in Akron (Ohio).

Thus, the failure of the first project did not stop the enthusiasts from Aereon Corp., and they continued to study promising, as it seemed then, subjects. Using new ideas and existing parts, they built a new prototype called Aereon 26. This machine is of great interest and worthy of separate consideration.