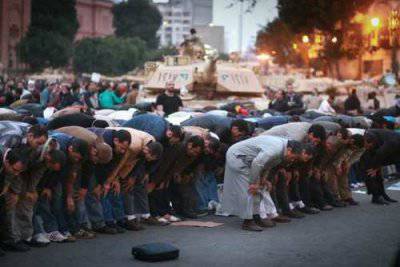 “PACE welcomes the election of the first civic president in Egypt as a result of elections, which are generally considered to be free and fair and which open up the country's transition to democracy” ... This is a resolution. This very PACE ... Do not subtract, not add. This is a diagnosis.

The Egyptian election of the “first civic president” is in fact some kind of carnival mockery at all the humanitarian and democratic banalities that have accompanied the entire process of the notorious “Arab spring” in a torrential stream. First, all real leaders are withdrawn from the elections, even Islamists, or liberas. In the process of presidential elections, the newly elected parliament is forcefully dispersed, and the military junta appropriates all conceivable and inconceivable legislative, executive, and judicial powers. As subtly noted in the same PACE resolution, “the dissolution of parliament emphasized the results of the first parliamentary elections ... which are generally considered free and fair.” Surprising near: some free and fair elections crossed out the results of other free and fair elections. Involuntarily recall the Ukrainian third round of 2005. That's how thorny he is, the path to democracy. Egyptian.

At the same time, the elections are won by two seemingly opposite candidates. Moreover, it is not technically possible to determine which of them really won, since the scale of falsifications is many times greater than any possible difference in the percentage given for each of them. The four-day delay allegedly in the counting of votes modestly covers the process of backstage negotiations. Transactions that resulted in the wise decision to award the victory to a candidate whose supporters sharply outnumber opponents in the degree of likely violence. I think it was not without the good advice of the Washington curator: they, who were busy with organizing the Syrian massacre, now just did not have enough Egyptian massacre. At the same time, there is no doubt that the candidate has demonstrated due humility, as evidenced by his immediate exit from the Muslim Brotherhood that raised him.

It is necessary to have clinical naivety in order to assume that the military elite, who directly control the 40% of the Egyptian economy, will simply give up power on the basis of some kind of elections and some kind of “revolution”. Real revolutions do not give power, real revolutions take power. Physically destroying the old power elite. Here I cannot deny myself the pleasure of citing one more quotation from a resolution adopted by humanitarian morons from the PACE: “There is a need to reassure the participants of the revolutionary movement who fear the appropriation of revolution goals by the military, on the one hand, and Islamists, on the other. So they "calm down". On the one hand, and on the other. Will correct, so to speak, the revolutionary-democratic necessity.

Now, when the wind of the “Arab spring” ruffles the curls of our “marsh” revolutionaries, it is very funny to once again observe the fruits of the modern world revolutionary process. Allah be with them, with the Arabs: Serbia, Georgia, Ukraine, Kyrgyzstan - all the victims of the process are unhappy in their own way. One thing unites them: these are no revolutions, because they initially did not expect any change of elites. These are elite coups, the meaning of which is the marginalization of the national state, the liberation of elites from the remains of state control at the cost of putting the country under direct external control. Real sovereignty in the modern world is actually an endangered thing, but here we are witnessing the elimination of the already secondary and tertiary signs of statehood. An ideal example of the triumph of the goals and objectives of the “color revolution” is the current Ukraine of Yanukovych, where power is the result of a public deal between oligarchic clans: any horny Square can show with a finger who is in the government whose boy. Or a girl.

Exceptions from this democratic harmony can only be the cases of the transition of pseudo-revolution to its present open form, not provided for by the “flower” procedure. When the ensuing chaos is stopped by the establishment of the most brutal revolutionary dictatorship. By type of Iranian, Taliban. Or Soviet. After which the curly revolutionaries began to groan, which again did not fit, the next evil Lenin broke the rosy prospects of good Kerensky. How the gypsy taught the horse to eat nothing. Taught It is a pity - died.

The meaning of this fable is simple. All present and future история "Color" and "non-color revolutions" demonstrates one thing. From the point of view of the ruling elite, there is no fundamental difference in the type of government. Monarchy, dictatorship, liberal democracy is only one or another way of reproducing the power of the current elite. In each era, in each culture, traditions and circumstances, one of them is the most effective and adequate.

If the elites are wrong, it may not end for them, because the alternative to reproducing the power of the existing elites is revolution, that is, the extermination of the old elite and the replacement of it with a new one. This is the only significant political difference. The elites playing in the “revolution”, especially in the not completely gutta-percha states, take great risks. This is worth thinking about. Curly head. While she is on her shoulders.