Topic of the week: Is Russia an effective partner for China in countering Western pressure? ('Huangqiu Shibao', China) 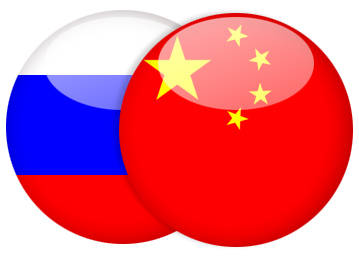 В stories China and Russia have experienced periods of love and hate, but both countries have a real need for each other in, for example, the issue of opposition to Western pressure. Is Russia for China an effective partner in this matter? (The survey data is shown on 21: 00 Moscow time 28 September - approx. Lane.)

Yes, the argument is “for” (everything is in order, for readability, the comments are given in direct order - note. Lane):

2010-09-28 11:25
China and Russia are neighbors, and they really don’t like America to remain a global hegemon. Only by joining together will they be able to resist Cao *.

2010-09-28 12:19
In relation to international public opinion, we must unite in our opposition to the US-led group, we must unite with Russia and jointly develop the economy.

2010-09-28 12:20
The complementarity of the Chinese and Russian economies is extremely great! Russia inherited minerals and heavy industry from the USSR, this is its advantage, in China the strengths are light industry and labor reserves. Relations between countries are not very close because of historical issues between countries and mistrust between two powerful neighbors! But first you need to understand a few questions!
1. Under the condition of full-scale war, can one of the parties capture the other? The answer is no!
2. After resolving territorial issues, do the parties have an intention to snatch his land from a neighbor? The answer is no!
3. In the case of threats or aggression of the West, can China or Russia, without friendly relations, alone confront the whole West? The answer is no!

2010-09-28 13:16
Those who are opposed to rallying with Russia are of two kinds: one kind is nationalists blinkered on patriotism, such people just need to be patiently treated (the text contains the phrase “such people should be patiently helped” - lane comment) ; others are followers of world capitalism, we usually call such people potential traitors, and as for them, we must be vigilant and expose them.

2010-09-28 14:22
My personal opinion is that it is necessary to build long-term partnership relations between China and Russia, this will bring great benefit to both countries.

2010-09-28 17:50
China and Russia have sympathies and antipathies, but there are also requirements of reality, to cooperate - to cooperate this way, but there should be no relationship of dependence, but only mutual support.

2010-09-28 10:59
You have to be strong yourself - this is the absolute truth. You need to be alert all the time, there are no eternal friends - there are eternal interests!

2010-09-28 11:02
If a country wants to be strong and independent, then you should not think that someone will help her, and you should not rely on someone else's help.

2010-09-28 11:32
No, because Russia seized 1,5 million square meters. km of Chinese territory and everything is not in a hurry to return them. They are friends with China, it’s a fake friendship, they achieve their goal, their government does not long to see China strong. Yes, and they themselves are great chauvinists.

2010-09-28 12:37
China is strong, and no matter who does not like it, even India won by forces measured, but what can we say about the United States and Japan. China wants to be powerful, so you have to be independent and you can not rely on anyone, China - go ahead!

2010-09-28 12:37
"Laomaozz" (the contemptuous nickname of the Russians - approx. Lane) owed us no less than the United States and Japan, sooner or later we will count!

2010-09-28 12:54
Not! Russia is also afraid of a strong China, “counting chickens in the fall,” but at the present time they will not leave China! You look at both partner countries, and in fact a lot has accumulated of what you can use, Haishenvey (Chinese name of Vladivostok - approx. Lane), Kuedao (Sakhalin island - approx. Lane) ... captured and trampled our children, you have been wandering for years in a foreign land, and when will you return to the arms of your Homeland !!!!

2010-09-28 13:16
You can not rely on others, the iron rule - only you yourself can achieve power and prosperity! There are eternal interests, but no eternal friends!

2010-09-28 13:36
The early USSR, proceeding from its own benefit, secretly concluded a treaty with Germany and surrendered to Poland. China today is not Poland, but after that it became highly suspicious. All because Russia not so long ago bought airplanes from America (as in the text - approx. Lane.). International relations, everything is changing, we need to strengthen ourselves, skillfully keep a balance between the forces, that's just how China will flourish, and not lose its weight in the long term. The Chinese - show solidarity - protect the Motherland!

2010-09-28 13:50
Any country takes care of its indigenous interests, but when the country's goals are contradictory, it cannot take care of your interests, the interests should be common, only then mutual support is possible. This question is not worth discussing, it would be necessary to discuss the question: “Does Russia have any interest in opposing the West together with China?” It seems to me - no, everything is very difficult and everything changes very quickly.

2010-09-28 15:04
“On one mountain it’s difficult to get along with two tigers,” as for Russia’s mighty military and rapidly growing China day by day, although they complement each other, this is not the basis for cooperation. On the contrary, based on the history and character of countries it is very difficult for them to be together.

2010-09-28 16:19
Friends are temporary, interests are eternal, trusting others is not something to believe in yourself.

2010-09-28 18:43
The lessons of history teach us that we should be afraid to pin any hopes on others, for this can lead to terrible misfortunes, international politics is a game with a cold heart, far from emotions. It is necessary to reject any thoughts about "maybe" and "was not."

2010-09-28 20:00
Historically, Russia has always been the rogues who warmed their hands on someone else's misfortune. In the 19 century, China was robbed, a large piece of earth was chopped off, you can’t repeat past mistakes.

2010-09-28 23:03
Russia brought China only suffering, those vast territories of the Northeast, Kuedao, Outer Mongolia, and you can’t list everything in one phrase.

2010-09-28 23:05
And I am against only one reason - Russia seized more than 1 million square kilometers of our territory and has not returned yet. And also at the beginning of the 60-s did not fulfill the contract and brought out their specialists, which led my country to enormous economic losses.

2010-09-28 23:15
With all their hearts, Laomaozz want to regain their position as a senior in Europe, and Asia is not very important for them.

* Most likely the text refers to Cao Cao.
Cao Cao (155 – 220) - Chinese commander, author of works on military skill and poet, the first minister of the Han dynasty. The de facto ruler of the Han Empire at the beginning of the 3rd century AD, which did not quite deserve to go down in history as its gravedigger.
Cao Cao appeared in the novel “Three Kingdoms” as the most colorful villain of his time. For the Chinese, he is one of the most prominent and recognizable figures in national history. At his disposal were the most numerous army of antiquity - the number of up to a million soldiers. After the victory at Guand, he stood on the threshold of the unification of China under his scepter, but lost the initiative to Sun Quan and Liu Bei as a result of a crushing defeat at the Battle of Red Rock.