Knights and non-knights of the Baltic

I'd like to talk to you
And to hear the truth ...
Is Voruta's castle a reality? Or is it just a dream?
Lina Adamonite. A letter to the tribesman of Prince Mindaugas (2001)

“The heart of the Baltic Europe is made up of the lands of the Grand Duchy of Lithuania (together with the Kingdom of Poland) and the Teutonic Order. The Danish dominium maris baltici, characteristic of the thirteenth century, gradually gave way to the German Hansa and the united Lithuanian-Polish monarchy in the fourteenth and fifteenth centuries. ”
SC Rowell, Baltic Europe, The New Cambridge Medieval History, vol. 6: c. 1300 - c. 1415, edited by Michael Jones, Cambridge University Press, 2000, p. 701.

Knights and chivalry of three centuries. During the Middle Ages, the modern Baltic states and some neighboring regions along the southern and eastern shores of the Baltic Sea were inhabited by various peoples who spoke Finnish, Baltic and Slavic languages. Among them were the Prussians, Lithuanians, Livonians, Latvians, and Estonians, who for several centuries maintained their independence from the Poles, Russians, and Germans. These Baltic peoples became the target of a series of so-called “northern crusades”, because they had long adhered to the pagan faith of their fathers. Their conquest and conversion to Christianity were actually the reason for the creation of the Order of the Swordsmen, the German military order, which was then combined with the larger Teutonic Order in 1237 — 1239. Although the Teutonic Order was founded in Palestine in 1190, it flourished in the Baltic states, where it existed from 1228 until the middle of the 16th century. 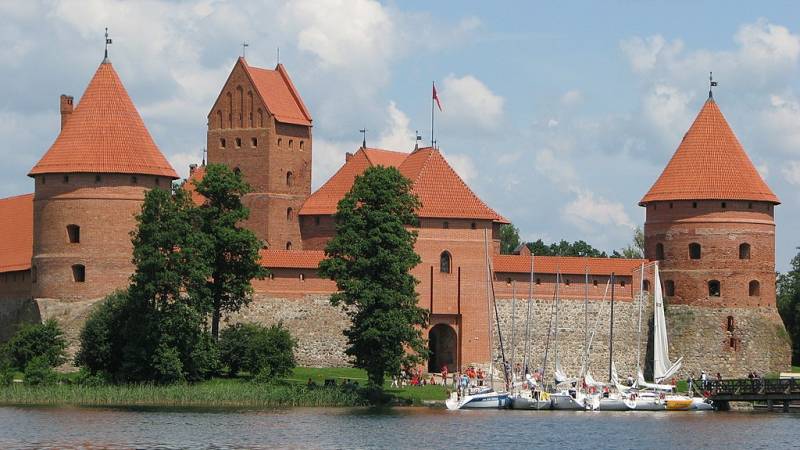 Lithuanian castle Trakai - the castle on the island.

"Acts of the Danes" Saxon Grammar

Start our acquaintance with the military history The Baltic nations will have a somewhat earlier period and this is why. The fact is that in the “Acts of the Danes” by Saxon Grammar it is indicated that the kushas and the Swedes who had previously paid the Danes an “annual tribute” attacked Denmark when a certain Rorick became king of Denmark. A number of other tribes joined this rebellion, choosing even their own king. Rorik defeated these "barbarians" in a battle at sea, and then the rest of the Baltic Slavs forced him to obey and pay tribute. 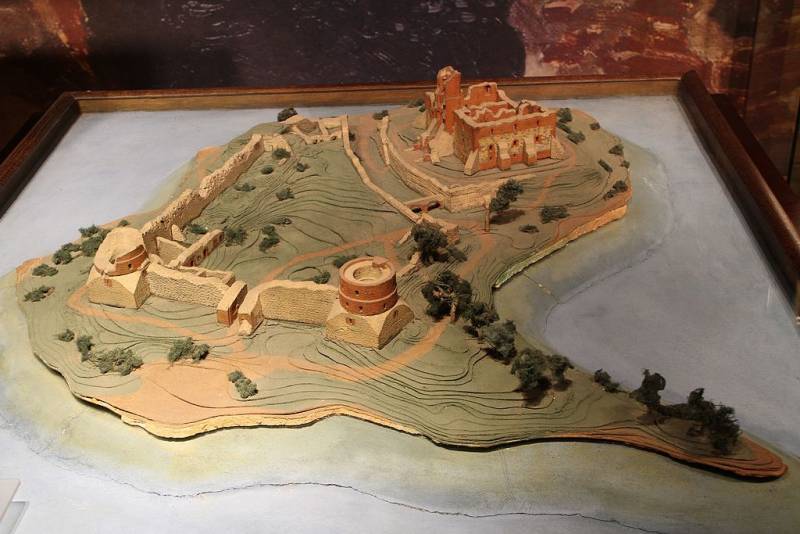 And this very Rorik can be fully identified with the Viking known to us, Rorik, who acted on the territory of Friesland and Jutland in the middle of the 9th century. Rorik is known to have marched to Denmark in the 855 and 857 years. and then fortified in South Jutland in 857. With varying success, he attacked Dorestad, and only in 870-873. received it in flax from the Franconian kings, and in 882, he was already dead.

Saxon’s struggle of Roric in the Baltic connects him with the strengthening of his power in Jutland in 857. But the same date also coincides well with the events that took place in Russia. The version that Rorik of Yutlands and the legendary Rurik - the ancestor of the Rurik dynasty, one and the same person, today is finding more and more adherents. The Russian chronicles refer his vocation to 862, and his death to 879. And, although these dates are rather conditional, they coincide with the main dates from the life of real historical Roric. 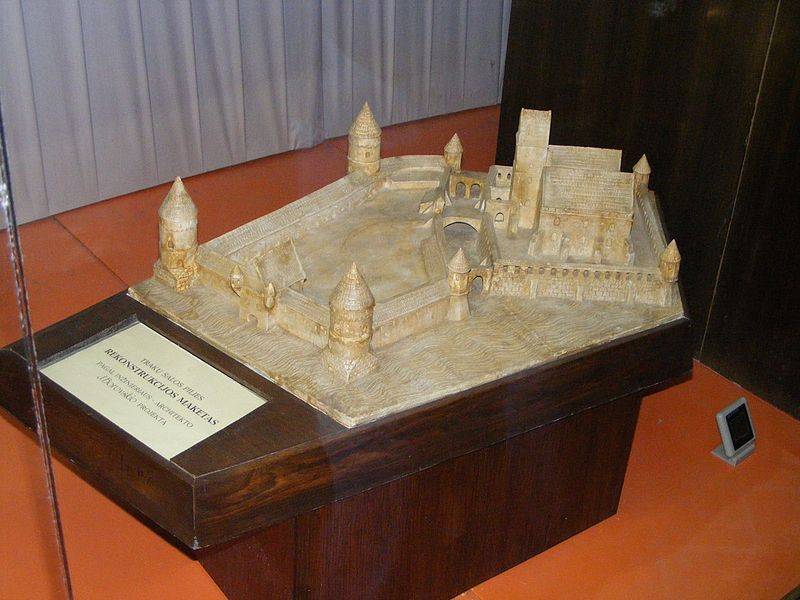 Layout of the castle Trakai in the museum of the castle. Interestingly, many castles were built in the lands of Lithuania, but not all of them were preserved in fair condition.

It is important that the struggle of Roric with the Curonians and the Swedes, which Saxo describes, is essentially an important link in his path to Russia. The Swedes had colonies in Kulandia (Grobiинa-Theburg) and in Northern Russia (Ladoga-Aldeygyuborg). And when the locals drove the Swedes across the sea, Rorik, who fought with them and the Kursh, immediately appeared. And why then the inhabitants of Ladoga did not invite him to defend them from the Swedes and beyond.

But further Saxo, albeit fragmentary, but tells about the events of the XI-XII centuries., As the period of piracy of the Curonian and other local tribes of the Eastern Baltic in the Baltic Sea. He reports pirate raids 1014, 1074, 1080 and 1170, confirming the greater activity of these pirates. That is, we can conclude that, as soon as the Viking era ended in the Scandinavian countries, the inhabitants of the Eastern Baltic States began to engage in piracy in their style. This implies first of all the squadron (trooper's) character of military affairs in the local tribes, with appropriate military equipment and combat tactics. 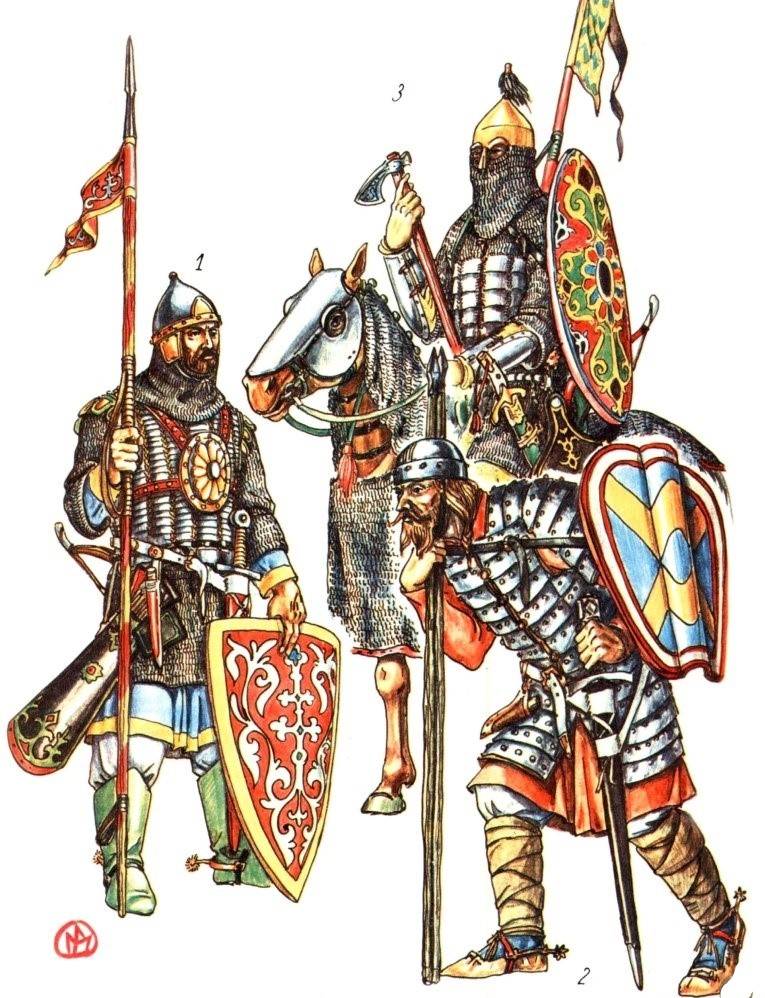 Russian warriors (left and above) and Lithuanian - right, middle of the XIV century. Figure M. Gorelik from the book: Gorelik MV Warriors of Eurasia: From the VIII century BC to the XVII century AD. L .: Montvert Publications, 1995.

Between the hammer and the anvil ...

However, the most important factor that influenced the development of this region of Europe was its ... “tightness” between Catholic countries in the West and Orthodox Russia in the East.

For example, Pomerania gained independence from Poland in the 1033 year, but gradually Germanized until, like a part of the Brandenburg march, it was not completely absorbed by the German Empire in the XIII century. Then, in 1231, the invasion of German Crusaders into the neighboring pagan nations began, and the Prussians were their first target. Wars continued with them in the XIV century. If we move further north, we will find ourselves on the lands of modern Estonia and Latvia, and we will know that they were captured in the 1203 year. Sandwiched between these areas, Lithuania retained its independence and even paganism in the second half of the 14th century, which can be considered a peculiar record of the existence of paganism in the center of Europe. However, by this time the Grand Duchy of Lithuania went on the offensive, eventually becoming one of the largest European states. Subsequently, she teamed up with Poland in the 1386 year to counteract the expansion of the crusaders, after which paganism was immediately officially abolished in Lithuania in the 1387 year. 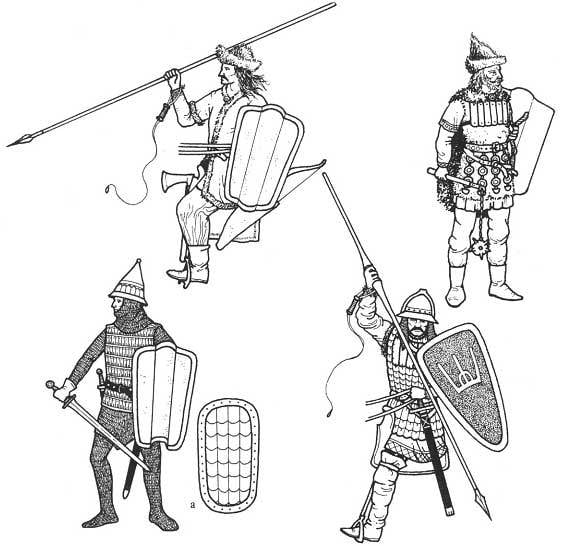 Lithuanian warriors. Fig. Ian Hisa from the book: Armies of the Middle Ages by Ian Heath. L .: Wargames Research Gp. 1984. Unfortunately, in those years, Hees illustrated his books with such small graphic drawings, so you don’t know much of them. However, they used a very large amount of material, so that they nevertheless deserve attention.

"Learn from the Germans!"

However, the opposition in these lands of Christianization was a bit of everything, although separately, which helped the Crusaders very much. The local tribes were always warlike, and now in the XI and XII centuries, looking at the Germans, they tried to acquire their own equestrian elite. At the same time, however, their military equipment was still very simple, but only a few of the warriors had armor. Weapon It was usually imported from Russia or Scandinavia, and although the use of a bow was widespread, the shooting technique, and the bows themselves, were very primitive. More advanced weapons, such as the same crossbows, were usually captured or bought from their opponents or neighbors. And over time, the Balts learned to copy the siege weapons of their opponents. However, swords continued to remain rare weapons until the XIV century, but spears were certainly very common weapons. 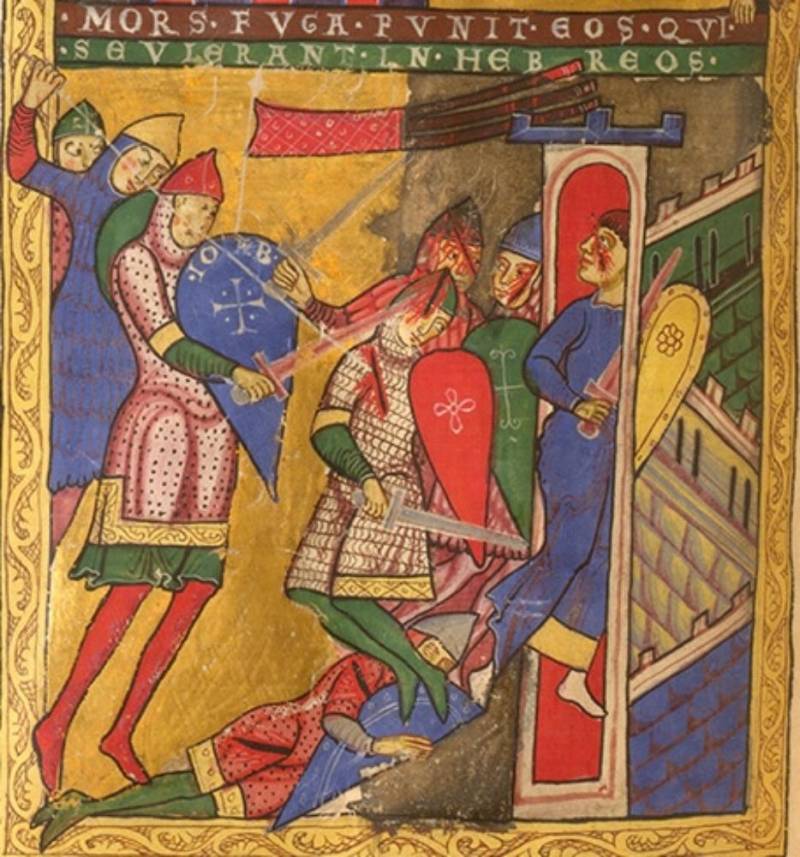 As you can see, the armament at that time was quite simple, so it was very easy for some to adopt it from one people. Thumbnail from Humbert’s Bible, 1175-1195 Regensburg, Germany (University Library of Nuremberg, Nuremberg)

The basis of the army - light cavalry

The Latvian and Lithuanian tribes of modern Latvia were small in number, weak, and their more militant neighbors simply hunted. Soon they came to terms with the domination of the German invaders, but Estonians, Lithuanians and Prussians periodically launched revolts against them. Relatively rich and numerous, the Prussians adopted the tactics of guerrilla warfare, because they lived in swampy and wooded lands and thus tried to resist the invading armored cavalry and crossbows of the invader. The Lithuanians were poorer, although they lived in an even more inaccessible area. However, they had many horses, which allowed them to develop their own tactics that their light cavalry used. And these Baltic warriors turned out to be so effective that the Teutonic knights did not disdain to use the representatives of the local aristocracy who had converted to Christianity in such a way that they would continue to maintain their military traditions already in the service of the Order, that is, to act very far-sighted. A similar process was noticed later in some parts of Lithuania. Well, the German crusaders themselves, of course, had knightly armament in the typical Central European style. 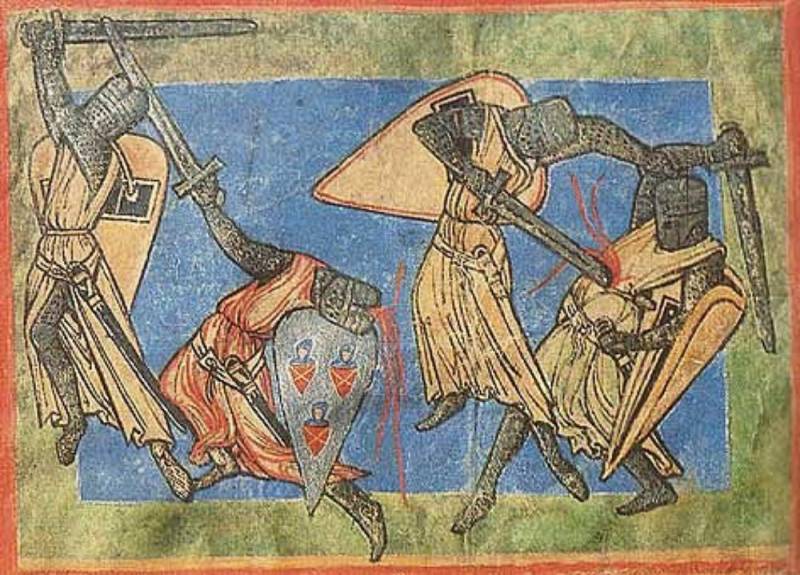 Here they were - the German knights, terrified on the Curonians and Prussians. Miniature from Spekulum Virginium, 1200 Tire, Germany. (Museum of Augustus Kestner)

Winter is the best time for war with Lithuania

By the middle of the 14th century, part of the Lithuanian elite wore full armor, probably in the Western European style, but most still adhered to national traditions. Their military organization may have become more sophisticated by the 13th and early 14th centuries, but the main military force in Lithuania, as before, remained surprisingly large cavalry units. According to D. Nicolas, Lithuanians mostly copied weapons and armor of the Polish and Russian type, as cheaper and more affordable. Their tactics were associated with the organization of rapid raids on the enemy, to get cattle, slaves or prey, and especially in the summer, when the swamps prevented heavy Christian cavalry from pursuing them. Instead, the crusaders preferred to attack the Lithuanians in the winter, using the frozen rivers as highways.

But then stormed the city! Miniature from the Aschaffenburg Golden Gospel, 1225-1275 Mainz, Germany. (Aschaffenburg Library)

After the Mongol invasions of the 1240 and 1250, the Lithuanians borrowed a lot from them, although darts and swords were used instead of bows, and their infantry was still armed with spears, axes and, possibly, crossbows. In any case, the tactics of their equestrian battle was similar to the Mongol one: attack, throw the enemy with darts and immediately retreat. And so on until the exhausted adversary turns to flight. True, the difference was in weapons, as the Lithuanians preferred darts to bows. And, by the way, Vitovt used the same tactic in the famous Battle of Grunwald, and she was also successful! Eastern European military influence as a whole also increased, and Lithuanian weapons and armor became similar to the armaments of both their eastern neighbor, that is, the Russian principalities, and the Mongols. This was especially noticeable in the lands of eastern Lithuania, in the center of which was the city of Vilna (Vilnius). Moreover, in Eastern Lithuania, it was decided to recruit mercenaries, including the Mongols. Interestingly, Western Lithuania longer clung to its paganism, but at the same time it was influenced by the military technologies of Western Europe and the Teutonic knights.