Fighting in the Little Land. Goat Slukhach and turtles

21 2019 June
16
Malaya Zemlya bridgehead was very specific and unique. First, it was too close to the main front line. Landings of this level are rarely carried out in a similar proximity to the front. Secondly, the area of ​​the beachhead was limited and never was static. Thirdly, the supply was carried out exclusively by the sea, which created many problems. And these problems were not limited by the opposition of the enemy. This relief, and the lack of infrastructure and so on. Four-legged helpers became the solution to the issue of transportation of goods in specific relief ... 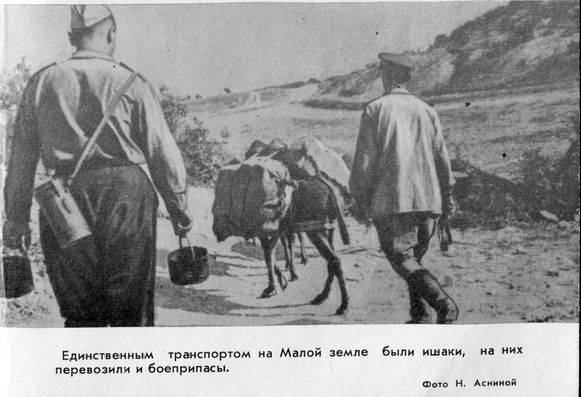 The main small-land (as well as the entire foothills of the Caucasus Mountains and the Caucasus itself) were donkeys. True, this four-legged transport generally enjoyed and is very popular in mountainous and foothill conditions, where narrow paths are the only threads connecting combat positions.

Directly in the Little Land, the donkeys transported everything — ammunition, weapons, and equipment. A small donkey, despite its modestly seemingly powerful forces, was quite capable of transporting up to two boxes of ammunition or shells for many kilometers. They took care of the animals, and during the day they grazed them in beams and crevices hidden from the enemy, where the donkeys could be fortified with vegetation.

Despite the fact that the name of these animals became synonymous with stupidity, donkeys on Malaya Zemlya demonstrated wonders of cunning and ingenuity. So, Georgii Vladimirovich Sokolov, a direct participant in the defense of the Little Land, the commander of a separate reconnaissance company, and later the editor of the newspaper “The Battle Banner” of the 117 Guards Division, in his numerous memoirs (for example, “Little Land”) recalled hardworking donkeys. When the donkeys met on a narrow mountain path, the one that was going empty flight, pressed low to the ground, and the laden “colleague” gently stepped over it and continued its flight.

Separately, it is worth mentioning the famous Malaya Zemlya cow. This fact, described even by Leonid Ilyich Brezhnev, did take place. So, once, in the case of supplies, one of the fighters was sent from Minor Land to Gelendzhik. Having seized the moment and wanting to enjoy a peaceful life, the fighter went for a walk in the mountains, truly, to breathe in the fresh air of pines and juniper, deprived of a caustic powder fire. It was there that he came across a completely lonely wandering cow, abandoned in the chaos of evacuation. 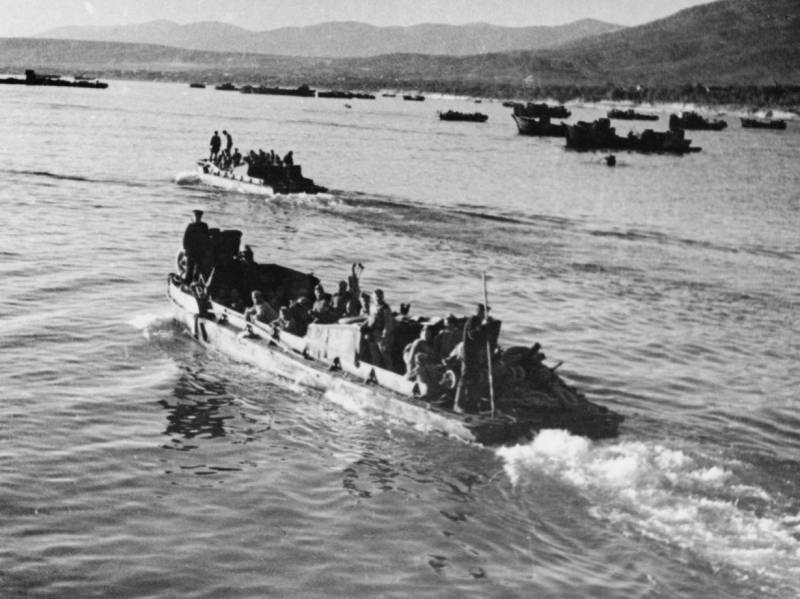 Motobots - transport of the Little Land

The fighter did not lose his head and led the cow to Gelendzhik pier. The commander of one of the amphibious bots, who, along with the schooners and motobarkas, carried out the transfer of cargo, manpower and equipment to the “Little Land” bridgehead, was at first confused by the request to deliver the cow to the coast covered by the battle. But after a brief explanation, he agreed to load the cow on the deck. The explanations were as simple as possible - milk for the wounded.

On the bridgehead the cow was met with great enthusiasm. Especially for her, they dug a safe shelter, brought hay with difficulty every day, and handed over all the milk they had been given to the hospital for the wounded. Also, the milk was supposed to guests of a kind of "rest home" - a special dugout for especially distinguished fighters, where they could afford to spend at least a couple of days on clean sheets away from battles, dirt and blood.

Strange as it may seem, the appearance of a cow also had a positive psychological effect. The defenders of the Lesser Land, especially from peasant families, after protracted battles, loved just to be near the peaceful female chewing hay, stroke the symbol of peaceful life and inhale the aroma of fresh milk.

The hero of the Soviet Union, the Marine, the indestructible defender of the Novorossiysk elevator, Alexander Vasilyevich Raikunov, in the book of his memoirs “The company, follow me!” (1984 year) recalled an unusual case when a goat made a fighting unit. Once a goat was found in one of the gorges of the Markotkh Ridge. The first desire of the Marines, whose diet in the conditions of the battles for Novorossiysk was more than scanty, was to fry from a hoofed noble barbecue. 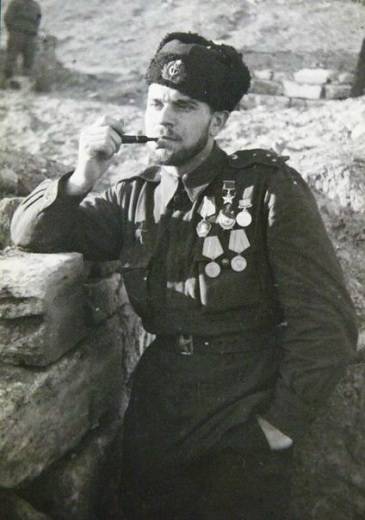 However, the commander decided otherwise to use the suddenly appeared meat resource. That same night, the goat was dragged to the slope of a mountain spur, which was located on a kind of neutral strip, and tied to a peg. Themselves as fighters in the number of 15 people lurking not far away, waiting for the Germans to also donate to the meat for free. It did not take long to wait, soon the trio of hapless Fritz headed for the goat. As a result, the whole company along with the goat was delivered to our headquarters. The fate of the goat is unknown.

But not always goats were considered only in gastronomic terms. When the paratroopers released Myskhako, the evacuation of civilians began, which were sent by sea to a relatively rear Gelendzhik. During the next loading onto the boats, the commander of one of the battalions of the 165 Infantry Brigade convinced a local resident to sell him a goat named Pretty Woman, because the people were evacuated first of all, and the woman had little chance of transporting the animal to the peaceful shore.

The goat was milked, supplementing the ration of wounded soldiers with goat milk. But once a German shell exploded near the goat. Pretty Woman did not suffer, but the soldiers noticed that the goat had become unusually sensitive to any signs of impending bombardment or shelling. No one else heard the echo from the whistling of shells or the echoes of the hum of the bomber, and the goat was already hiding in the rocky ledges. They couldn’t think of a better signaling system, therefore, despite the fact that the beauty of the shock almost stopped giving milk, the goat was left in the battalion, closely watching its behavior.

Turtles, but not ninjas


Once on the coast near Novorossiysk, it was not worth much to meet the Mediterranean tortoise of Nikolsky. Even the author saw them several times in his childhood, but now this species is under threat of complete extinction due to human activity. And during the war, there were a huge number of turtles on the bridgehead. I personally could not find reports that they were used for food, but the fact of using them for the purpose of provoking the enemy is quite real. 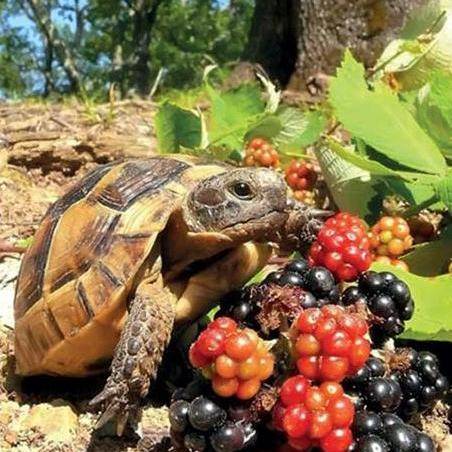 So, once one of the fighters caught in the trenches a turtle heading towards the German positions. Either the fighter decided to test the invented method of provoking the enemy, or simply decided to annoy the Fritz, but, having tied a tin can to the turtle, he sent the new saboteur to the German barriers. The turtle reached the German barbed wire hung with cans and bottles and made a lot of noise. The enemy, mortally afraid of desperate marines, did not understand, opened indiscriminate shooting.

The next day, our fighters had already prepared a whole detachment of ten turtles. This time the rumble was stronger, so the Germans poured the absolutely empty boom line with fire longer, while our soldiers quietly fixed firing points and without hesitation enjoyed the waste of enemy ammunition.