The victory in Syria, and you can already speak about this outcome of events, is a kind of non-standard victory in the newest Russian storiesThat is why the attitude towards her, to put it mildly, is peculiar. Too bloody and hard history fell out of Russia in the 20 century. The First World War, which instead of victory brought the collapse of the empire and civil war ... Collectivization and industrialization were bought at the price of the greatest sacrifices. World War II turned into a real catastrophe for Russia. 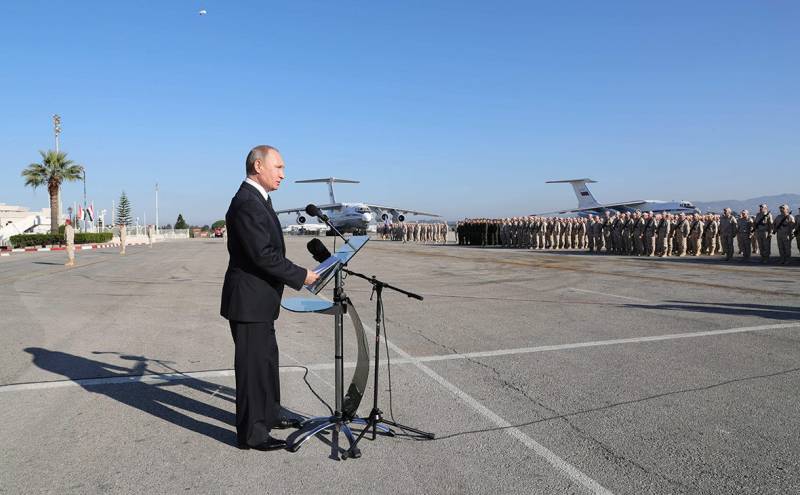 As a result (as a result): a closed society with a tough political regime and extremely low standard of living up to the 70 of the 20 of the century (even during Khrushchev there were problems with bread!). For very different reasons, the superpower of the USSR could not provide its citizens with either freedom of movement (even within the Soviet bloc!), Or often essential goods. A vivid example of "helping the allies" and "successful geopolitics" is "helping Egypt" and "exile from Egypt."

Then there was the Afghan war, which demanded gigantic spending, but which, let's say, “did not end with victory”. In fact, ordinary citizens have the wrong idea that state power and an active foreign policy are expensive, bloody, risky, and unpromising.

There is little here: it is known that one of the reasons for Russia's entry into the PRC was “the issue of the straits”, so it is still absolutely not obvious that, having placed millions of its soldiers on the battlefields and not allowing the Central Powers to win, Russia would "Straits" received. Some historians are plagued by strong doubts ... This is the very Churchill with his heroic landing ... in the Dardanelles. Speak, "crush Turkey"? But why start its "smash" in the most powerful and fortified place? There were no other options? But at the very beginning of the war to seize the straits ... Then many more thought that the war would be short. "Secret guarantees of Russia"? Oh well.

It is impossible not to recall the epic struggle “for the freedom of the Slavs”, which devoured a lot of lives, money, political resources and, in general, did not bring Russia any good results. And the Berlin Congress can be remembered.

Each time one gets the impression that Russia is fighting head to head with the adversary, laying down the battlefield with the corpses of its soldiers, but strangely enough, the fruits of victories are completely different. And even in 1945, after inhuman sacrifices and phenomenal victories, no one wanted to “give” Eastern Europe to Stalin. About the fact that these most Eastern Europeans "deserved freedom": they just did not deserve it. They did practically nothing to defend this freedom from Hitler, and they collaborated very actively with this very Hitler.

And yes, freedom is necessary deserve!

In the end, all this provides tremendous material for historians, novelists, filmmakers and the creators of the military-patriotic song. The tragedy (namely, a significant part of the Russian history of the first half of the 20 of the 20th century can be described as such) is an excellent material for a variety of creative work, but it’s not quite comfortable to live in such an “interesting era."

And this very Syrian war stands out sharply from a number of previous events and is not very similar to them. Without serious involvement of large ground forces and, most importantly, without serious losses in a reasonable amount of time, certain political results were achieved. So to speak, without hysteria and without overwhelming the enemy with corpses. If anything, then before this there were two Chechen campaigns (on its territory!), The first of which Russia in fact lost. The war in South Ossetia is also difficult to call the brilliant victory of the modern high-tech army (there was still the domination of the Georgian aviation in the first phase of the battles and the epic naval battle with the Georgian fleet).

But in Syria everything was a little different ... Here we are trying to rub in some "friends" - how much Russia spent on that money war. Billions! And they let a "male tear" on this occasion, because how could we live well with this money! These people clearly do not know: usually for participation in the war, Russia had to pay much more than just money. For participation in the wars of Russia often had to pay with human lives (not counting them), and the destruction of their cities, and revolutions ... Yes, there was a lot of things.

It is no coincidence that by the centenary of the beginning of the PRC, the question was actively debated: could Russia have avoided participation in it? Because this “participation” is too sideways for us. There is a problem in what (for all “non-opposition to evil by violence”): the preservation of the largest territory in the world and the protection of their interests, even in the near abroad, automatically assume the presence of a strong state and an active foreign policy.

There is no other way, on this happy planet, nobody will just be left alone. In due time everyone, anyone (in the USSR!), Actively criticized the war in Afghanistan. Say, why is it necessary? In addition to quite obvious results directly on Afghan territory, we did get a war already in our own mountains. By the way, the "international public opinion" paradoxically again it was not on our side. Although the “gap” between these two wars is literally 5 years old.

And after all, we left Afghanistan, as we were asked! However, this did not save us from the war in Chechnya and from the “international disapproval”. And, by the way, the army in Chechnya fought a completely different one (why?). And senseless losses were much higher. And then the parents of the captured went on “independent Ichkeria” and tried to buy them out. Glorious was a little time ... That is, the technology of "rejection of imperial ambitions" clearly does not work. One war follows another. The one who didn’t like the “aggressive war in Afghanistan” got a “progressive war in Chechnya”.

But the war in the Syrian theater was of a completely different nature: Russia basically “pressed on technology” while simultaneously promoting this technique to international markets and promoting its interests in the region at the cost of money, albeit not human lives, scattered to the right and left. Another war. Periodically, Putin "withdraws his troops" (it has been several times already), but the war continues. And he does not say “the whole truth”. And, actually, to whom he should say "the whole truth"? Our dear Western "partners"? And let's "bash on bash." You are “the whole truth” to us, we are to you ...

Of course, in Syria, V.V. Putin is playing a rather complicated game. Those. no nobility, no "open wide", no "open cards". Fighting with someone and for something. A good sign is that the Western partners are "mad with rage." And again you will say that it is expensive for money? Well, two Chechens cost much more. And most importantly - in human sacrifices, not in money. And in general, from the experience of our Anglo-Saxon partners, it is better to fight "in Granada" than "near Stalingrad."

Leaving it means a hut (not touched by bombs and shells) and go to that very Granada, fight for the land for a simple Granada guy ... otherwise there will be some Sevilians who will come to fight your the earth. Or they will send an armed “opposition” to fight for the promotion of democracy in “your hut”. I would not want to.

Author:
Oleg Egorov
Photos used:
tass.ru
Articles from this series:
Why do we fight so much?