20 2019 June
102
So, business card of the imperial cavalry - horse attacks, had a number of prerequisites, in the presence of which was successful (see Surprise as a success factor for horse attack). But, reading about the numerous cavalry attacks of the Russian cavalry, the reader probably unwittingly wondered: where is that German cavalry, which the Germans were so proud of in peacetime, where is the dashing Hungarian cavalry on the elegant Hungarian Anglo-Arabs? 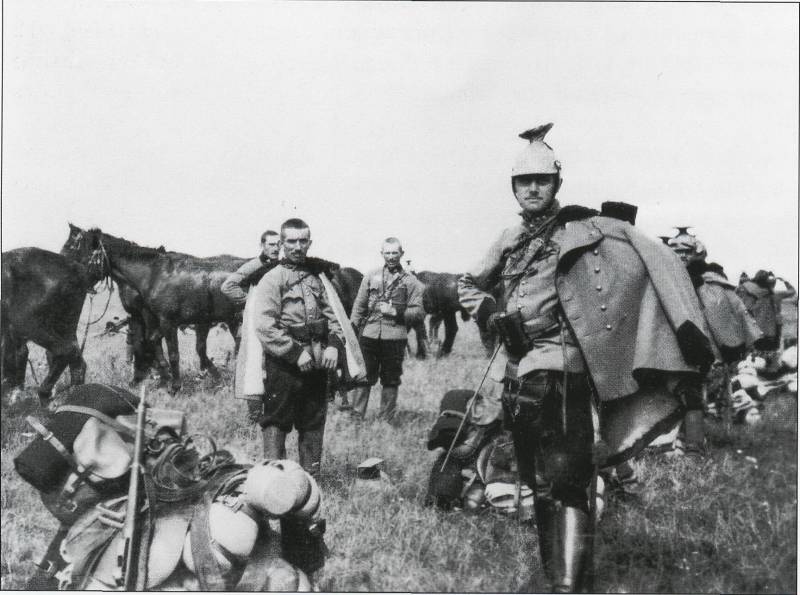 She rarely appeared on the battlefield, almost did not attack in the equestrian ranks, and when she took on Russian horse attacks, she was mercilessly destroyed.

There are many reasons. And the first reason is that neither the Hungarian, nor the Austrian, nor, the more so, the German cavalrymen did not have that bold spirit, that high burst of selflessness and courage, which Russian cavalrymen fully possessed. In many ways, this forced them to dodge horse attacks and, accordingly, melee fights.

But the Austro-Hungarian cavalry, unlike its ally, at the beginning of the war, tried to act actively - valiantly attacking the Russians and taking horseback attacks.

We can recall the brilliant attacks of the Hungarian hussars on the Leib-Borodinsky regiment of Vladimir-Volynsky at the very end of July 1914. But the high impulse, the insanity of the brave was useless. Borodino with resilience and courage, the natural qualities of the Russian infantry, took the attack. Against them, brilliant hussars line up behind the field. The hussar mentikas sparkle in the sun, the red pants, the horses snort and rush for the line behind the gray infantry trenches. Rush to lie down, oblique fire rifles and machine guns. Hussars scattering across the field rush back, they are collected again - and again they lead to a disastrous attack, then again and again. 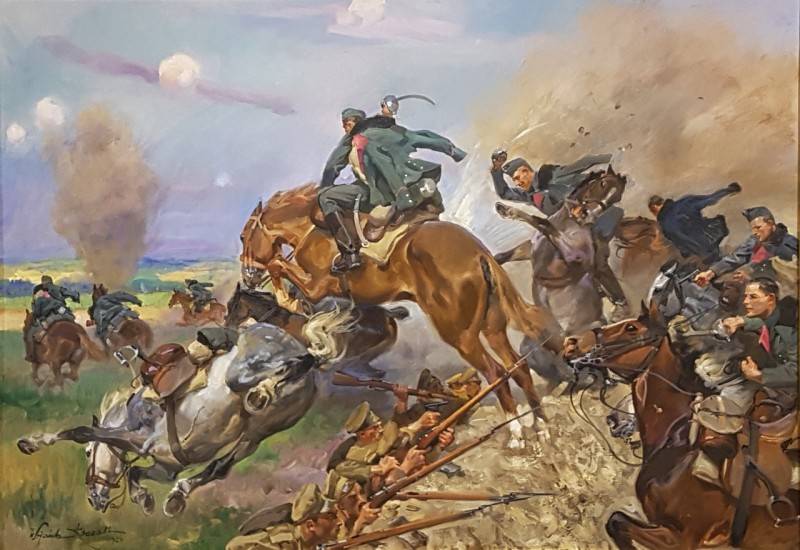 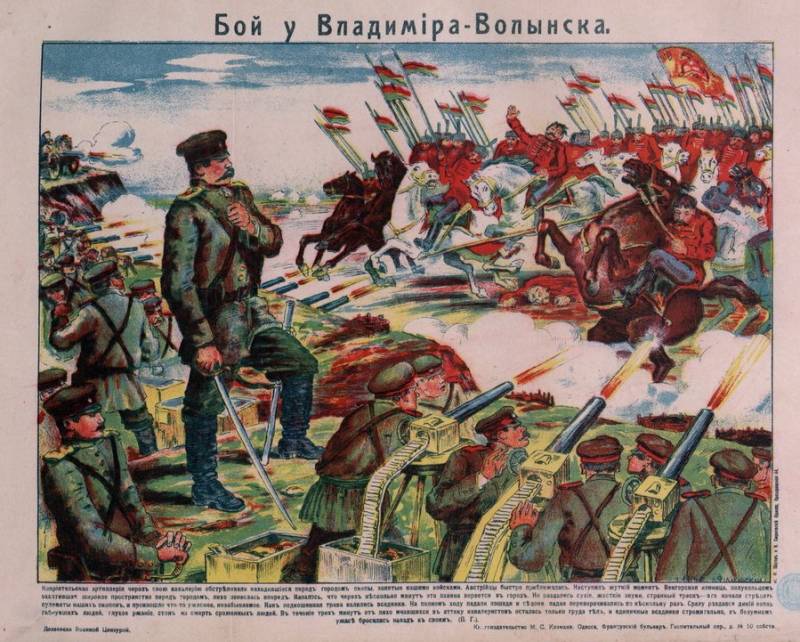 What was it done for and what did the Austro-Hungarian chief want to prove with this? What attack of cavalry against infantry is impossible? If the latter is vain, for the Russian cavalry and Cossack attacks, which destroyed the Austrian and German divisions and took prisoners by the thousands, proved quite the opposite.

We can recall the battle at Satanov (Gorodok) - one of the most prominent cavalry clashes in the First World War (See Tychotsky E. Attack of the Austro-Hungarian Cavalry on the 2-th Consolidated Cossack Division under the m. Gorodok 4 - 17 August 1914 Belgrade, 1930.). The 16-th Don and 1-th Linear Cossack regiments of the division of Lieutenant-General A. A. Pavlov defeated the Austro-Hungarian 5 th Cavalry drove division and utterly defeated the enemy.

And you can also mention the cavalry battle of the Russian 10 and Austro-Hungarian 4 cavalry divisions (Slivinsky A. Equestrian Fight of 10 Cavalry Division of General Count Keller 8 / 21 August 1914 of the village of Yaroslavitsy. Serbia, 1921.). Eyewitnesses recalled that as blue cornflowers descended along a green-yellow field line after line Austrian cavalrymen. They moved down a steep hillside, and the Ingermanland hussars and Orenburg Cossacks rushed towards them. Both the hussars and the Cossacks were so small that at one time the whole field seemed blue and only in some places among the blue of the enemy uniforms with gray-green blotches flashed the hussars and Cossacks. It was as if they were absorbed by the mass of cavalrymen of the enemy, surrounded by Austrians, but they stabbed and chopped up the enemy in the way that F. Keller taught them in peacetime - and as the groups of cavalrymen converged and dispersed, more and more of the defeated were observed on the land of the immovable Austrians and gray-green Russians became increasingly clear in this field. And the Austrian cavalrymen could not stand the beatings - and they began to retreat, pursued by the Ingermanlanders. A new wave of Austrian squadrons descends from the hills, but the friendly lava of the Orenburg people rushes on small horses to the flank - and the remnants of the Austrian division “seem to be rear”. 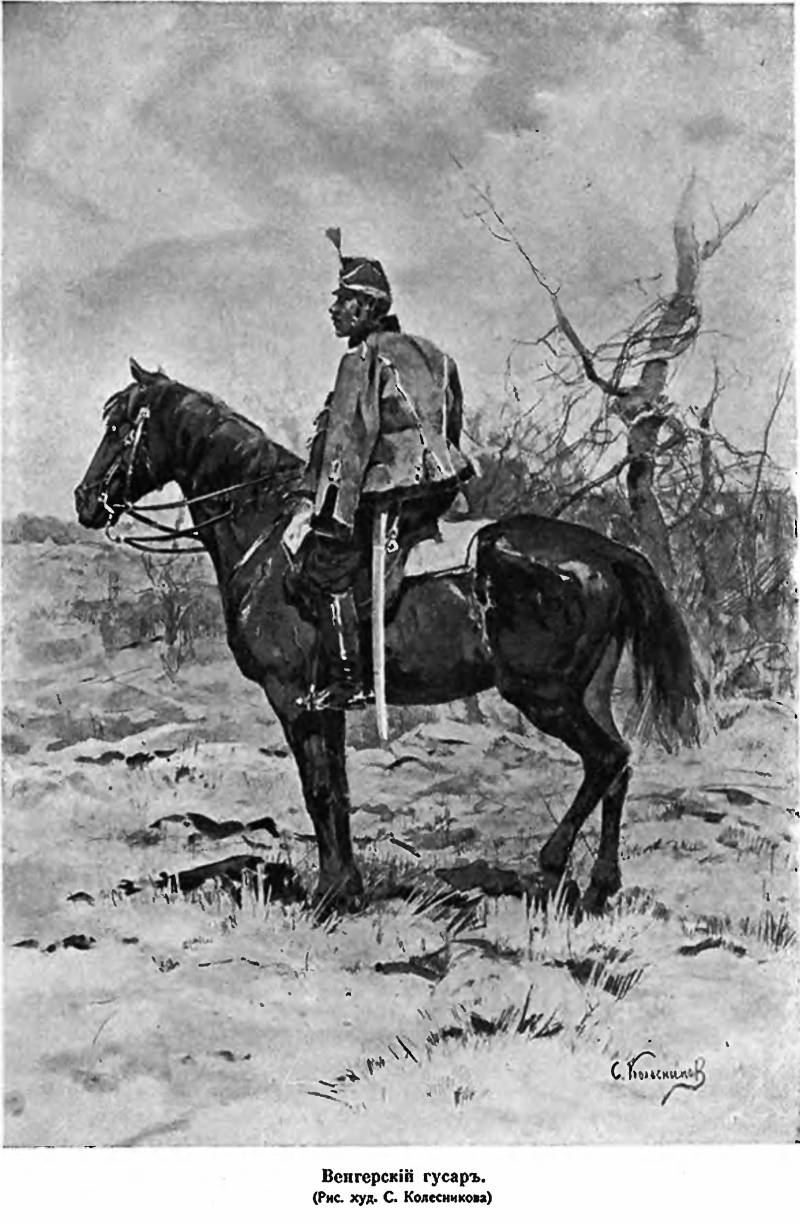 How can such a thing happen that the Austro-Hungarian cavalry was so easily and mercilessly destroyed by Russian cavalrymen and Cossacks, who often sat on small and outbred horses, no less strong, beautiful horse and personnel, brought up in a knightly spirit?

An eyewitness recalled how the 17 Cossacks of the 4, hundreds of 10s of the Don Cossack Regiment under the command of Podhorunzhi Fomin, rushed to the squadron of about eighty Austrian ulans. The Austrians accepted this attack. For a few moments, the Cossacks completely dissolved in the blue mass of lancers. I heard a clank weapons and moans. But then the squadron began to depart, leaving the 20 to be chopped up and battered on the battlefield. The rest galloped off. What happened? An eyewitness, a Russian officer, wrote: “Have you seen heavy straight Austrian sabers, like broadswords, resembling our sea broadswords? They are made of bad iron, they are poorly honed. The Austrians do not know how to chop them, and, surrounded by the Cossacks, they did only “defense” against the rush and checkers, and, of course, could not defend themselves against the powerful blows of the Cossacks. And how strong these blows were, they showed the corpses of people, among whom we saw people cut from neck to waist along.
“We would cut them all down,” the Cossacks would say, “but you can’t cut a fur menentum with them, so they’ll have a checker in it, until you’ve guessed to chop it in your face, and they have already started to flow away.” 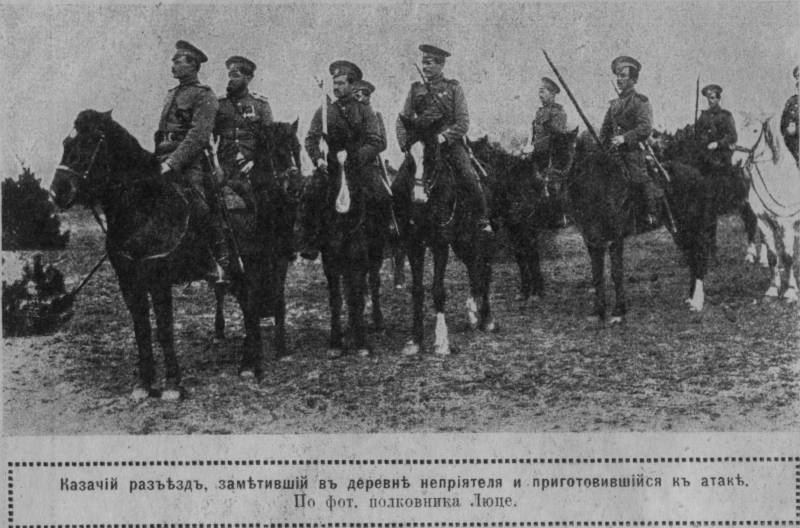 Yet, in fact, the Hungarian hussars turned out to be the only equivalent opponent of the Russian Cossacks who took the blow. Cossack officer noted that "Hungarians are able to fight!". And he wrote that after the end of the war, when the facts and the names of the heroes arose in the halo of glory, the Hungarians, who fought with lions, would greatly help the glory of the Russian cavalry regiments. He recalled the debut of the Hungarian division, on hot horses, in colored boughs and bright baked lights burning in the sun on Russian rifle chains and trenches. The earth rumbled, and stupid bullets rushed toward the Hungarians by the thousands — people and horses were knocking under the bites. The shrapnel line was melting the air, and behind the last avalanche more and more bright spots remained on the ground. But she stubbornly walked. Already visible are the long sparks of the broadswords and the career of horse-sweeping horse bodies. What a proud, wonderful picture it was! The land groaned before the trenches, and the arrows, who could not stop the approaching shaft with fire, hurriedly left the trenches to the edge of the forest, which was behind the positions - so that with the help of thick trees they could try to stop the mad knightly tide ...
And the knights all went on !! 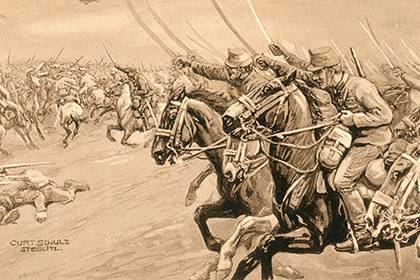 And at the last moment, when the forward horses of the Hungarians, with powerful throws, were already jumping over the trenches left - the earth again buzzed to the left ...
And a new avalanche with a hesitating long stubble peak peaked to the Hungarians in the flank - leaning on the necks of horses racing at full speed with one desire - scrape and kill! .. 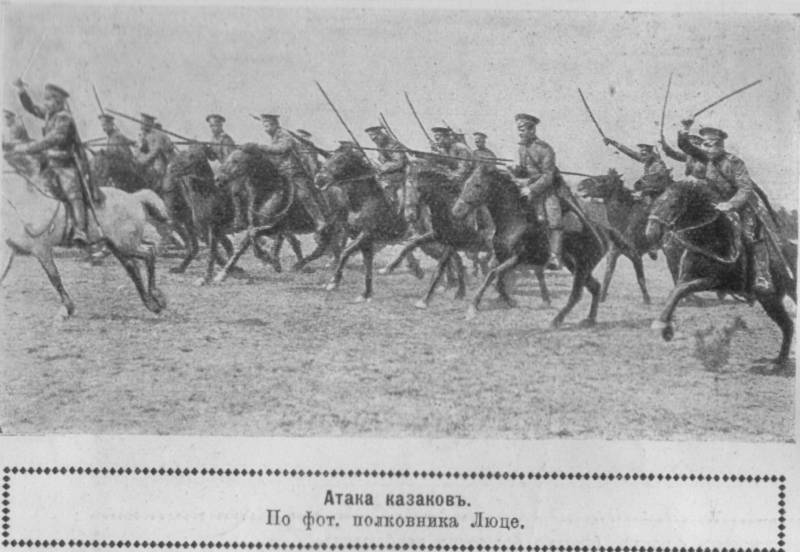 The cavalry knocked down ... And 2 hours - a bloody mess of people, horses, blows and splashes of blood ...
Many of us, noted the Cossack officer, who received heavy blows of broadswords, can be proud of them, because they received blows from true knights, beautiful medieval with their prowess. Initially, the Russian checkers, slid, powerlessly gnashing, on the epaulettes and hard hats of the Hungarians ... And then, having realized what was the matter, the checkers began to beat the Hungarians around their necks to their faces, crushing the cartilage, tousled skin and deeply penetrating muscles ...
But the Hungarians did not yawn either. And God forbid, the officer exclaimed, to chop up everyone as much as, for example, one Hungarian hussar chopped up - he smashed the muzzle pad on his rifle and drove his heavy long sword onto a whole nail into the steel of a rifle barrel. This blow can be appreciated only by those who know what cutting is. But to a hussar, this blow cost life - which the blade spiked out of it ... All participants in this battle of the knights are brave. But after this case, which cost the Hungarians of almost the entire division, there are no more major fights (Sayan L. Three months in battle. Diary of a Cossack officer. M., 1915. C. 119-121).

In the battle of 24 February, 1915 near the villages. The right-wing observation post of 6 of hundreds of 10 of the Don Cossack regiment, centurion Ushakov discovered the ruins of the German 20 Cavalry Division 8 Dragoon Regiment at the ruins of the 5 distillery. Cossacks were only 12. But, faithful to the precepts of the 10 regiment, always attacking, apart from enemies, the Cossacks rushed along the snow-covered beams and hills to the factory. The Germans mounted horses, built a front, raised peaks above their heads, as if threatening to attack. And the next moment ... The next moment, they, as if on command, threw peaks on the ground - and jumped from the Cossacks. The Cossacks managed to overtake two Germans - and they were destroyed. 20 peak became the prey of the Cossacks.

And there are dozens of similar cases.

Author:
Oleynikov Alexey
Articles from this series:
Surprise as a success factor for horse attack
Commander's determination is the key to a successful horse attack
Natural and artificial obstacles - the mortal enemy of the cavalry
Business card of the imperial cavalry. Russian cavalry attacks in the First World War

Ctrl Enter
Noticed oshЫbku Highlight text and press. Ctrl + Enter
We are
1914. Fight at YaroslavitsyThe myth of useless cavalry
102 comments
Information
Dear reader, to leave comments on the publication, you must to register.