To those five little houses? ..
Buson

Contemporaries of the Mongols. And it was that in 1268, 1271 and 1274. Khan Kublai (Kublai Khan), the emperor of China, sent his envoys to Japan over and over again with an unveiled request: pay tribute to him! The attitude of the Japanese to China was at that time similar to that of the younger brother towards the elder. And it is not surprising, because all the best in Japan came there precisely from China - tea and writing, military art, laws and religion. It was believed that China is a great country, worthy of all respect and admiration. Today it is not known what words and language in which Khubilai’s envoys explained to the Japanese, but it’s clear that they had to deal not only with the emperor’s court, but also with the samurai from Baku, this new and ambitious military government of Japan. But ambition is ambition, but bakufu had no experience in international diplomacy, and where did he come from? In addition, samurai from bakufu knew about events in China only from the words of Buddhist monks who fled from the mainland from the Mongols. The Kamakur shogunate treated them very favorably, some of these fugitives even made a very good career in Japan, but ... was this source of information about the Mongols sufficiently objective, or was it a story about "savages riding hairy horses"? And what could Buddhist monks tell about the military power of the Mongols? Well, it is known that the founder of the Japanese school Nitiren believed that the Mongol invasion of China was a sign of global decline. That is, most likely, even Bakuku considered this and therefore underestimated the strength of the Mongols.

Autumn 1274. Takenaga Sueaki fights the Mongols during their first invasion. His horse is wounded by arrows and frightened by explosions. Such tactics were so unusual for samurai that they were taken by surprise, but then they still learned how to resist their opponent. (“Myoko Suray Ecotoba”, Kunaytö Museum, Japan)

The beginning of the first invasion

Aristocrats at the emperor's court in Kyoto were accustomed to submit to powerful China, at least they were morally ready for this. Therefore, they wanted to agree to the Mongols' demands and pay tribute to them, however, the young regent Hojo Toki-mune decided that he should be abandoned. He appealed to the samurai to forget the strife and protect the country from invasion. They began by putting guard posts in the north of Kyushu. Well, Khubilai decided that he would not abandon this self-will and ordered the Koreans to build 900 ships, since it was impossible for the dry land to invade Japan. Ordered - done. The ships were built, and in October 1274, the Mongols set out to fight overseas. 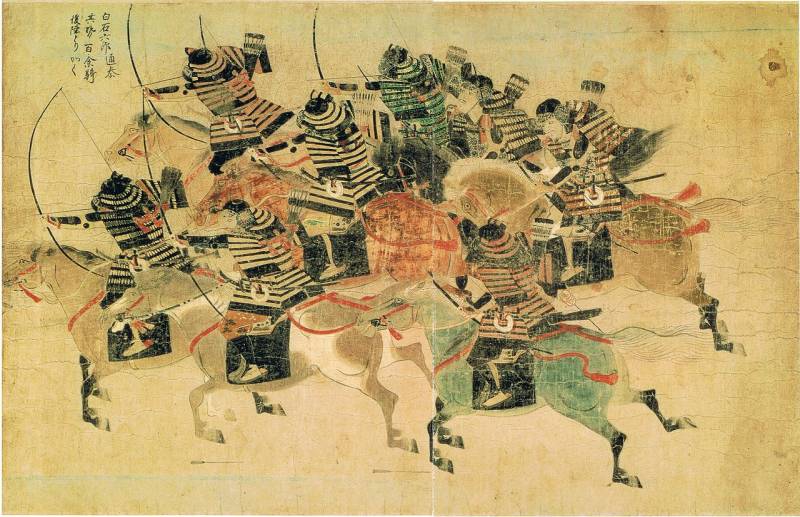 The fact that at this time in Japan begins the season of typhoons, they did not even suspect. First, they landed on the island of Tsushima, which lay just halfway between Korea and Kyushu, and then on the island Iki, which was located near the coast of Japan. In the battles with the invaders, two commanders, Sho Susakuni and Tairano Kagataka, who were close to the local governor and detachments of local samurai, were killed. 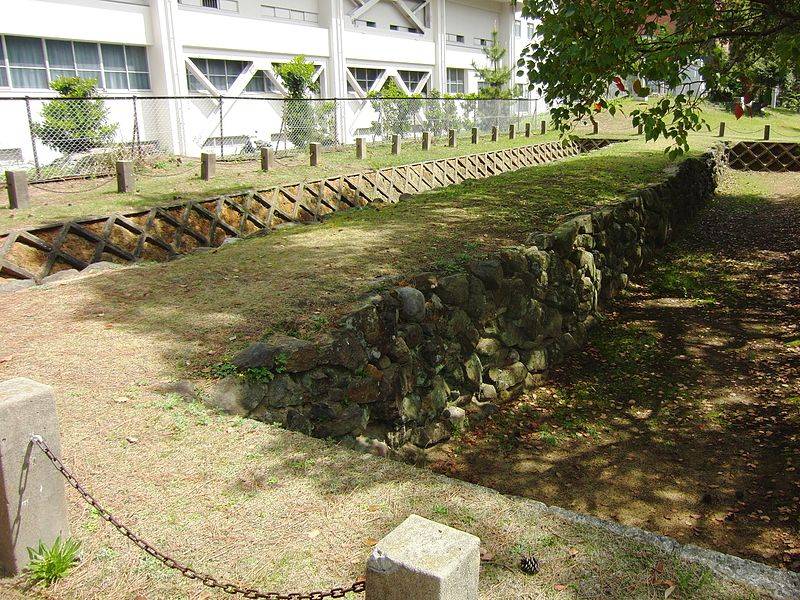 Ruins of coastal fortifications in Hakata Bay on Kyushu. In ancient times, their length exceeded 20 km. In some places, fortifications were erected only from stone, in others the space between the two stone walls was filled with sand.

Then the Mongols reached Hakata Bay in northern Kyushu and landed there on the shore. There they were met by warriors of a completely unusual appearance. And the battle began with the fact that a young rider left their ranks, shouted something loudly, it was not clear why he let out a loudly whistling arrow (cabur or kaburai - “whistling arrow” of the beginning of the battle) and rushed alone at the Mongols. Naturally, they immediately shot him with bows, not knowing that, according to the samurai rules, one soldier must start the battle, who declared his name and the merits of his ancestors to the enemy and launched a "whistling arrow." Perhaps once it was a Mongol custom. After all, the Japanese language belongs to the Altai language group. But it was only so long ago that the “new Mongols” had completely forgotten about him. 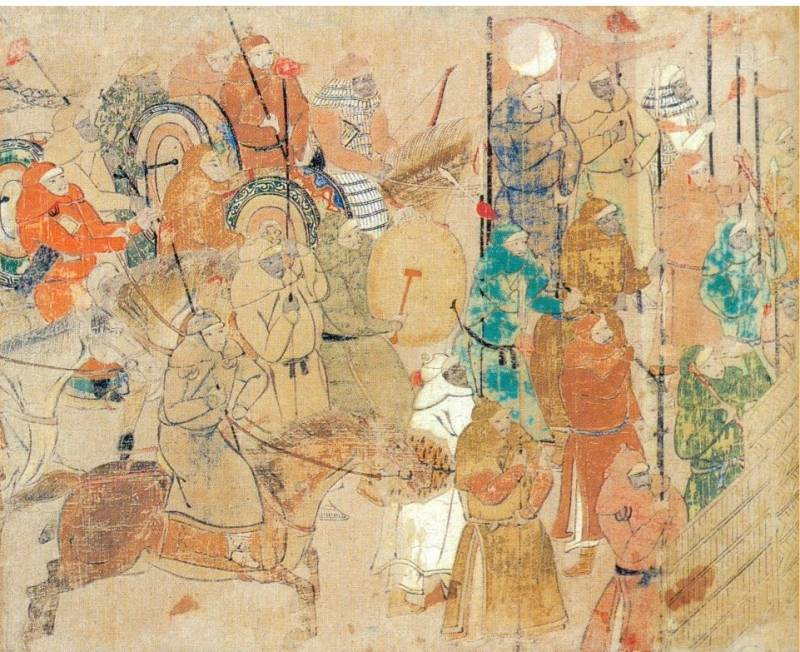 Image of Mongol warriors from Myoko Shurai Ecotoba (original). As you can see, of the 17 warriors present on it, only three people have metal armor from the plates. The rest are dressed in long-sex "bathrobes" and peaked felt hats. Growth shields, clearly wicker. And they are not all horsemen. Infantry more. Consequently, many of them are Koreans, and Mongols on horses are not very many. 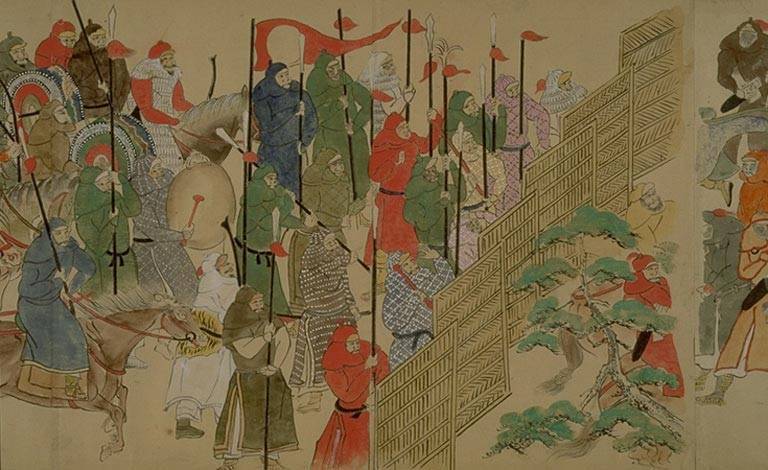 The same picture with drawing details.

According to the samurai, the Mongols fought, speaking our language, "too rational," which was unworthy of glorious warriors who had equally glorious ancestors. The samurai have become accustomed to observing the very strict rules of conduct of warriors on the battlefield, and here? .. The Mongols did not fight one by one, but immediately by numerous troops, did not recognize any single fights, but also showed absolute contempt for death and killed everyone got in their way. The worst thing is that they used explosive shells, explosions that terribly frightened samurai horses and made panic in their ranks. 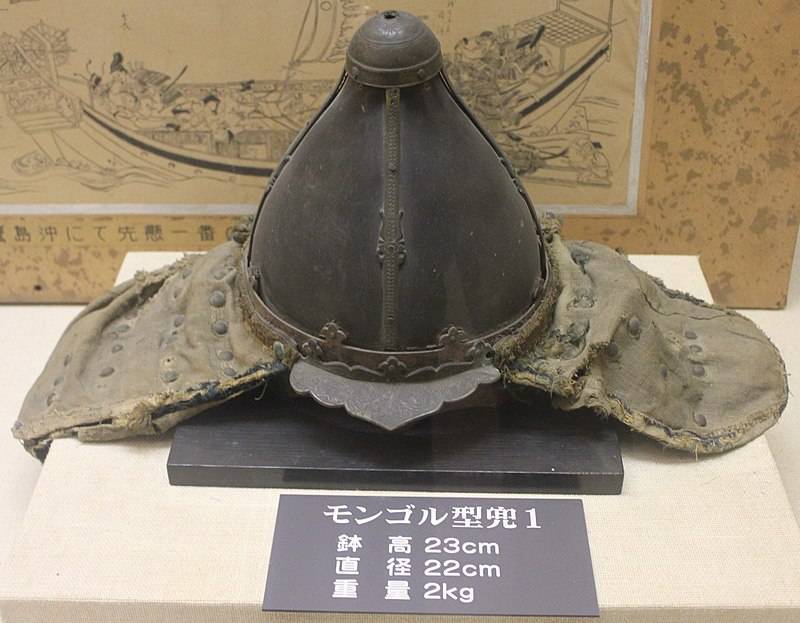 The samurai of Kyushu suffered great losses and retreated from the coast to the city of Dadzayfu, which was the administrative center of Kyushu, and there took refuge in an ancient fortress, waiting for reinforcements. But for the Mongolian commanders, the victory was so costly that they thought. In addition, if the Mongols fought traditionally bravely, then the Koreans, who were also recruited into the army, tried in every way to avoid the battle, and it was obvious that you could not rely on them. Therefore, they decided not to risk it and, fearing a night counterattack, returned to their ships. Well, at night a great rainstorm broke out, a strong storm began and it all ended with the fact that when the next morning the samurai scouts took ashore, they did not find a single Mongolian ship in the bay. It is believed that the conquerors lost then 200 ships and 13500 soldiers, that is, almost half the troops. Well, the survivors ... cleaned up well, good back. 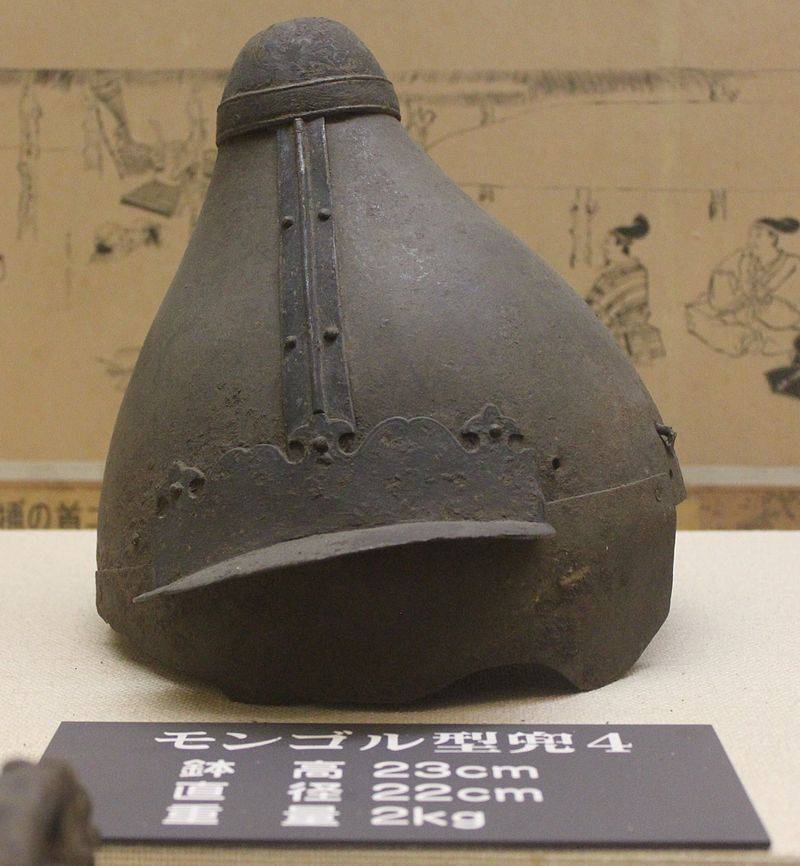 By 1279, the Mongols had also taken possession of Southern China, so Kublai Khan had an entire army and a significant part fleet Song Dynasty. A new embassy was sent to Japan demanding humility, but the Japanese killed it. The Mongols didn’t forgive anyone for this, so Kublai Khan immediately ordered the Chinese to build another 600 ships and prepare the army for an attack against Japan. Waiting for a new invasion, Hojo Tokimune ordered the construction of a defensive wall along the coast of the northern part of Kyushu Island. It was built from earth and stones, and its height was 2 m, and the width of the foundation was not more than 3. It is clear that such a strengthening could not be called formidable. But such an obstacle against the Mongolian cavalry is better than none - the samurai decided and built a wall. 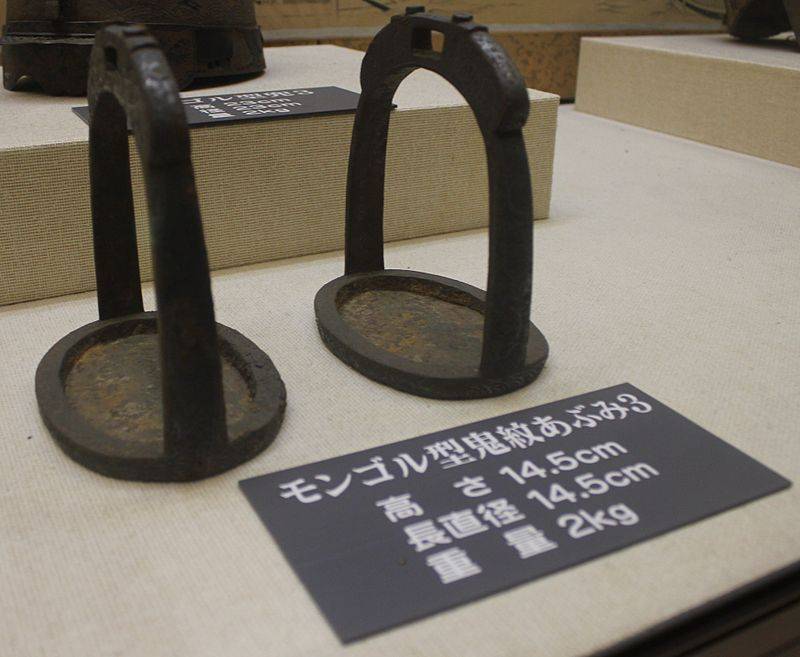 At the site of the landing of the Mongols in Japan, such iron stirrups were also found. (Historical Museum in Genko, Japan)

Fights on land and at sea

The new Kubilai expedition was divided into two armies: Eastern and Southern. The first was landed on 900 ships and consisted of 25 thousands of Mongolian, Korean and Chinese soldiers and 15 thousands of sailors. In July, 1281, she sailed from East Korea, while the Southern Fleet, four times the size of Eastern, went to meet him at the island of Iki. The troops of the Eastern Army again landed on the islands of Tsushima and Iki, but its commanders decided to try to capture Kyushu before the approach of the Southern Army. The troops of the Mongols again began to land at the northern cape of the Gulf of Hakata, but they met with fierce resistance from the forces of Otomo Yasouri and Adati Morimune. They had to anchor off the coast. It was then that they were attacked by light boats, in which samurai swam up to them and either set fire to the enemy’s ships with incendiary arrows, or took them to the boarding and ... also set fire to them. In addition, July in Japan is the hottest month and in addition - a rainy month. Because of the heat, dampness and crowded people on board, food supplies began to rot. This led to illnesses that killed about 3000 of the Mongols, and their morale dropped.

"The wind of the spirits comes to the rescue!"

It was not until mid-August that ships from the Southern Army reached the sea and also headed towards Kyushu. But then on the night of 19 on August 20, the ships of the conquerors were again attacked by light samurai ships and caused them losses. And 22 August began what the Japanese themselves later called kamikaze - “divine wind” (or “wind of spirits”) - a typhoon that swept and sank 4 thousands of ships and caused the death of 30 thousands of warriors. In fact, the Southern Army then ceased to exist as a combat unit.

True, the Eastern Fleet, which was at this time in the bay of Hirato, this time almost did not suffer. But then the commanders of the invasion armies began to argue about whether to continue such an unsuccessful campaign in such conditions. The Mongols from the Eastern Army believed that it should be continued, but the surviving Chinese, of whom the majority of the Southern Army consisted, did not agree at all. Then one Chinese commander simply ran off to the surviving ship in China, leaving his warriors to their fate. And as a result, it was decided to immediately move away from these unkind shores. Thus, many warriors who found themselves on Takashima Island, losing the support of the fleet and ... any hope of returning home. Soon all of them, that is, the Mongols and Koreans, were killed, but the samurai spared the Chinese. 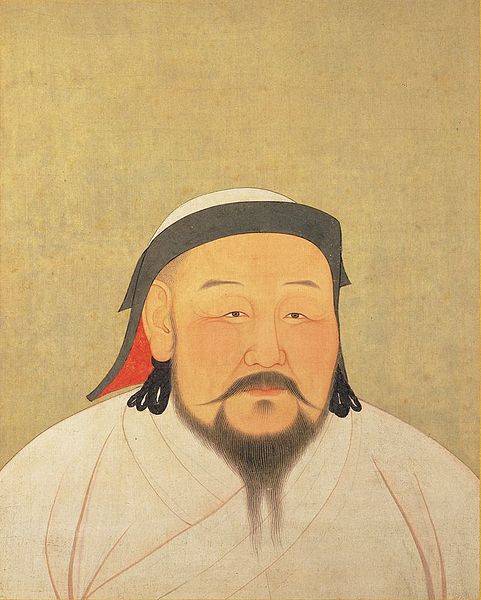 Emperor Khubilai did not like this outcome of the invasion he had planned, and he tried several times to repeat it, but this was hampered by the ongoing uprisings of the Chinese and Vietnamese people. In Korea, he even again ordered to collect an army, but among the Koreans began such a massive desertion, so he had to abandon his plans. For forty years, Khubilai dreamed of capturing the "golden islands", but his dream remained that way.

Information about the invasion came into the documents of many temples and the office of bakufu. And not just hit, scrolls, which tells about the heroic exploits of the samurai, according to his display set. The fact is that in Japan it was customary to demand from the suzerain, and in this case it was just the bakufu, awards for valor. And the samurai sent messages there, where they scrupulously listed all the severed heads and captured trophies. Not lagged behind and the monks! Thus, one abbot of the monastery wrote that by the prayers of his brotherhood, the deity of their temple from the top of its roof threw lightning into the Chinese fleet! This is how this remarkable document appeared, which have come down to our days and called “The Scroll of the Mongol invasion” - “Myoko surai ecotoba”. He was made for the samurai Takenaki Sueaki, who expected, like many, the bakuma Kamakura awards for participation in the war and therefore ordered his artist to display his courage in detail. The drawing, most likely made under the supervision of this samurai, historically very faithfully depicted and weaponand the armor of the time. It describes both episodes of these significant events for Japan, but it is still an important historical source.

We are in Yandex Zen
Chernobyl notebook. Part of 3
Father told
57 comments
Information
Dear reader, to leave comments on the publication, you must to register.