9 2019 June
20
This time, in the lens of the Polygon program of the T24 TV channel, there is a new generation Mi-28N attack helicopter. These military vehicles firmly took their place in the army aviation Of Russia. In any weather and time of day, they are ready, like real hunters, to covertly search and destroy the enemy. Mi-28N can fly on one engine and with damaged blades, in the air it is subject to elements of complex aerobatics with high overloads, available only to combat aircraft. A helicopter can take on board almost 3 tons of weapons and use it at any time of the day, even in total darkness. 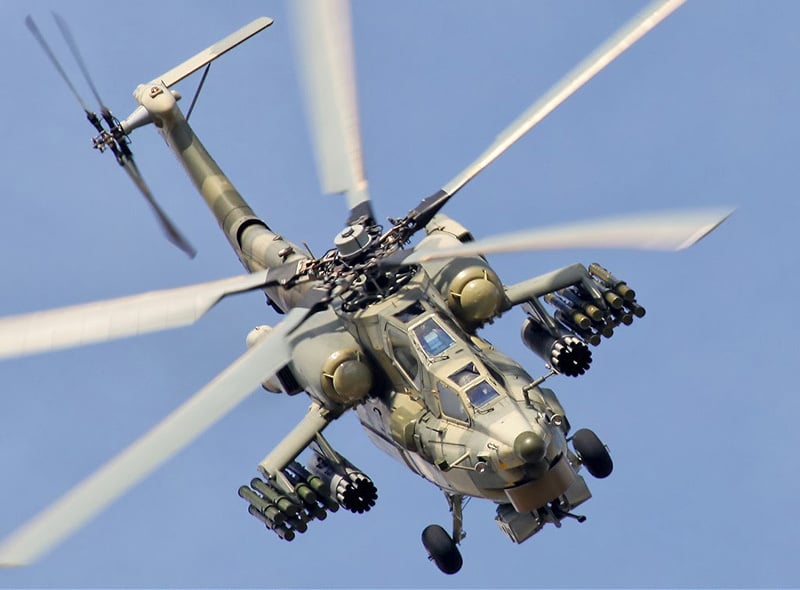 Russian helicopters of the Mi family are known and respected throughout the world. Military and civilian vehicles are created in the design office of Mikhail Mil. One of the main industries is located in Rostov-on-Don. Initially, much was borrowed from the Mi-24 for the new helicopter. The latter was a participant in many armed conflicts and wars, went through the harsh school of Afghanistan, underwent many different modifications and was modernized more than once. But at the same time, military operations in Afghanistan showed that the army needed a new helicopter with the possibility of its use against enemy armored vehicles. Soviet designers were given a specific task - to teach a new helicopter to deal with tanks. And already in 1996, the Mi-28N appeared - the first Russian helicopter that could operate at any time of the day and in any weather, for which it received the formidable nickname "Night Hunter".

The Mi-28H is equipped with an onboard avionics complex that meets the requirements of the fifth generation. It is he who allows the helicopter to conduct combat operations around the clock and in adverse weather conditions. The complex also solves flight and navigation tasks at extremely low altitudes. Unlike previous-generation machines, Mi-28H blades are not made of aluminum, but made of composite materials, and the spars, the bases of the blades, are made of very durable glass tape. All these and other innovations allowed not only to increase the speed of the combat vehicle, but also to reduce the noise level, which is very important for the secretive actions of the Night Hunter.

In addition, the crew cabin, made of aluminum sheets with glued on top of karmic tiles, was also upgraded. The latter, when they are hit by bullets or fragments, break up and at the same time extinguish the energy of the projectile, stopping the striking element. Also covered with armor are the most important components and systems of the helicopter.

Another innovation was the arrangement of two 2200 hp engines. each on the sides of the fuselage. Between them is the main gearbox and auxiliary power unit. This layout eliminates the possibility of hitting both engines at once. And if one fails, then you can return to the base on the second.

The helicopter provides for a crew rescue system in an emergency landing - these are special pilot seats and landing gear that can absorb shocks. The crew of the Mi-28H consists of two people - the navigator-operator and the pilot. The first one searches for, detects and defeats targets, the second one controls the entire control. Moreover, the pilot's seat is located above the shooter's place, this location provides an excellent overview. In the event of a contingency or catastrophic destruction of the structure, the doors of both cabins are automatically fired, and then special ladders are inflated, which allow the crew to quickly and safely leave the car with the help of parachutes.

However, the design of the Mi-28H implies a cockpit for special passengers. In a small compartment with a door on the left side can accommodate up to three people. This may be a helicopter technician or special forces soldiers evacuated from the combat zone.

Mi-28H is the name of a flying tank, which is very deserved. The “Attack” guided missiles are the main force of the “Night Hunter”. Against such weapons Not a single modern tank with dynamic protection will survive. In addition, the air fighter is equipped with built-in small arms and guns - 30 2А42 millimeter cannon, designed both for hitting air targets, and for lightly armored vehicles and enemy manpower. Also, the machine can be equipped to install minefields. To detect targets and aiming at them guided missiles and guns, the Mi-28H uses a sight-sight station with three channels: television, thermal imaging and laser. Computer "brain" can keep the target in the crosshairs, even when the helicopter makes maneuvers.

Mi-28H has unique aerobatic characteristics, it was on this machine that the “Dead loop” and “Butterfly” were first performed. The radar "Crossbow" allows the helicopter to fly and maneuver at ultra-low altitudes. He can hide behind the folds of the terrain and thus, quietly sneak up to the enemy’s positions and strike. The air fighter can fly forward and sideways at speeds of 100 km / h, perform rotation on its axis while continuing to move, as well as make anti-missile maneuvers. Also at the disposal of pilots a special system to control the helicopter at night. Mi-28H helicopters can easily track the columns of militants, who increasingly began to move under cover of night, hoping to remain unnoticed.

We are in Yandex Zen
Most-most: Mi-28H "Night Hunter"
The unearthly beauty of the "Alligator"
20 comments
Information
Dear reader, to leave comments on the publication, you must to register.