How and why Kazakhstan changed the capital

10 2019 June
140
9 June 1994, the then President of Kazakhstan Nursultan Nazarbayev finally decided on the need to transfer the capital of the country from Almaty to another city. He announced that the capital would be transferred to Akmola, as the city of Tselinograd, the former Akmolinsk was called from 1992 onwards. In 1998, Akmola was renamed to Astana, which in translation from Kazakh language means “capital”. 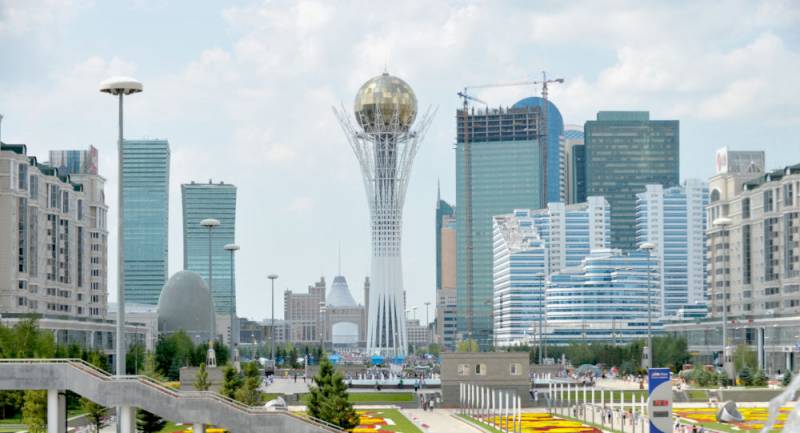 The main reasons for the transfer of the capital

The mid-nineties of the last century was a difficult time for Kazakhstan as a young state. The economic situation of the country left much to be desired, the danger of conflicts on interethnic grounds remained. By a happy coincidence, Kazakhstan managed to avoid large-scale riots and armed clashes, but this does not mean that there was no potential threat in the republic - although Kazakhstan was initially more multinational than the neighboring republics of Central Asia, Kazakh also grew from the end of the 1980. nationalism.

On the other hand, the Russian, especially the Cossack population of Northern Kazakhstan remained, from the point of view of the Kazakh authorities, an extremely risky factor. But the authorities did not like the location of the old capital of Almaty. Formally, the supporters of the transfer of the capital motivated their position by the proximity of Alma-Ata to the state border with China, climate features, seismic risk. In fact, the main reason for the transfer of the capital of the country were very different factors and considerations.

By the end of the 1980-s in the ethnic and demographic terms in Kazakhstan there was an uneven distribution of the population. In the south and southeast, the majority of the population were ethnic Kazakhs, who constituted more than 50-60% in areas such as Kzyl-Orda, Guryev, Chimkent and some other areas. Overpopulation was characteristic of the southern and south-eastern regions of Kazakhstan, caused by a high birth rate and initially larger population, while the northern lands of the country looked much more empty. 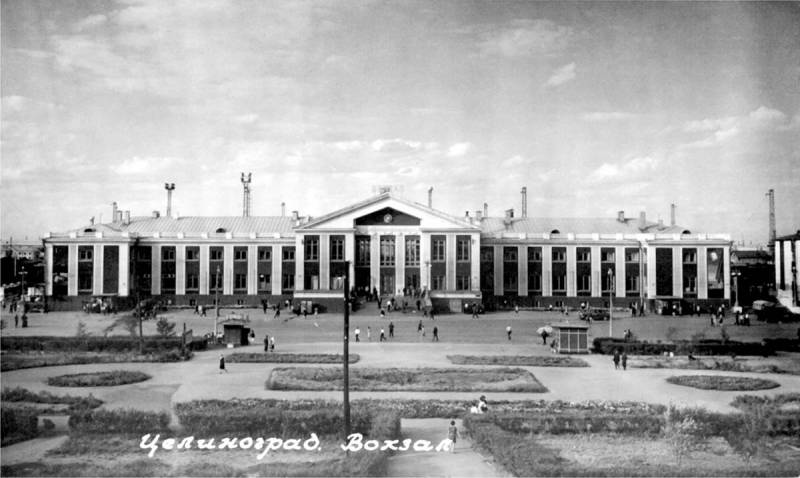 In addition, in the north and especially in the north-west of the country, the Kazakhs were in the minority, but there lived a large Russian and Cossack population and, from the point of view of the Kazakhs, adjoined to the Russian peoples — Germans, Poles, Ukrainians, Jews, Tatars . At one time in the north of Kazakhstan they even wanted to make German autonomy, and Tselinograd - Akmola was considered as its potential administrative center.

The leadership of Kazakhstan was terribly afraid of rejection of vast northern lands, especially since similar processes took place in the entire post-Soviet space — it is enough to give examples of Transnistria, Nagorno-Karabakh, South Ossetia, and Abkhazia. Therefore, the country's authorities were interested in increasing the number of ethnic Kazakhs in the north of the country, but how could this be done? The best way out was to increase the attractiveness of Northern Kazakhstan for ethnic Kazakhs from other regions of the country. And here the ideal option was the transfer of the capital from Almaty, located in the south of the country, in one of the North Kazakhstan cities.

Initially, Pavlodar was considered as a potential capital. However, then the Kazakh leaders decided that it is still located too close to the Russian border. Historians who had little idea of ​​the technical side of the transfer of the capital, asked to stop the choice on Ulytau - the district center in the Dzhezkazgan region. This was explained by the fact that the geographical center of Kazakhstan is located in Ulytau. However, Ulytau had a number of its problems - from the lack of a rail link to a small amount of water. In addition, Ulytau - a small district center - would hardly look solid and attractive, would require enormous resources and a lot of time to turn the town into a worthy successor to Almaty.

In the end, the authorities of the republic chose Akmola. After all, it was a fairly large city, a hub of road and rail links between the south of the republic and the northern, eastern and western regions. By the way, about making Akmola, then called Tselinograd, as a republican center, was thought even under Nikita Sergeyevich Khrushchev. True, they wanted to turn Tselinograd into the capital of the autonomous Tselinny Republic, which they were going to isolate from the Kazakh SSR. But then the leadership of the Soviet Union refused from plans to create a Tselinny Republic. The later plans to create the German Autonomous Republic with the capital in Tselinograd were not crowned with success. However, the infrastructure of Tselinograd had a very good one - from transport highways to telephone communication.

About. that Alma-Ata is a Russian city, until 1921, called Faithful, is known to all. But the new capital of Kazakhstan was also founded in the process of colonization of the Kazakh steppes by the Russian Empire. In 1830, a Cossack outpost was founded - an order from Akmolinsky, named after the neighboring Kazakh settlement of Akmol - “White Shrine”. Around the outpost, Russians and Cossacks quickly settled with their families. This is how the settlement of the Cossack Territory arose, the founder of which was the participant of the Battle of Borodino, colonel Fedor Kuzmich Shubin-the second. 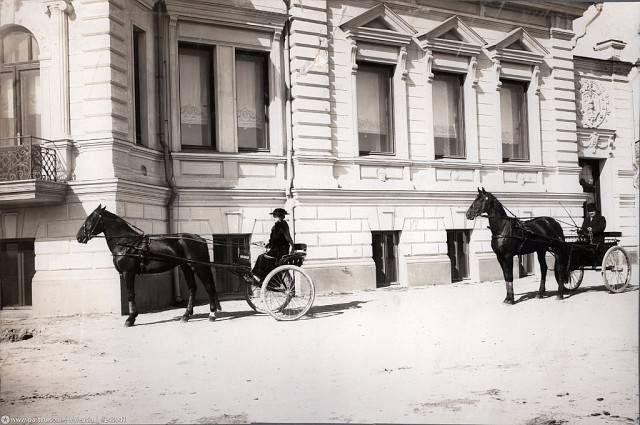 16 June 1863 of the Akmola fortification was given the status of a district city, and on October 21 of the year it received the status of a regional city - the center of Akmola region. The districts of the Siberian Kirgiz region - Kokchetav, Atbasar, Akmolinsky, and part of the regimental districts of the Siberian Cossack army were included in the Akmola region.

In 1931-1936 through Akmolinsk stretched the railway to Kartaly (Chelyabinsk region), after which the city received a new impetus to development. However, the real impetus to the transformation of Akmolinsk into a modern city gave the development of virgin lands, which began under Nikita Khrushchev. 20 March 1961, Akmolinsk was renamed Tselinograd, which turned into the center of the Virgin Lands.

In Tselinograd, the largest agricultural machinery plant in the Republic of Tselinselmash and the Kazakhselmash plant were established in the republic, and grandiose construction work was launched. On empty lands, new high-rise urban neighborhoods have grown, numerous social infrastructure facilities have been built - schools, hospitals, palaces of pioneers. 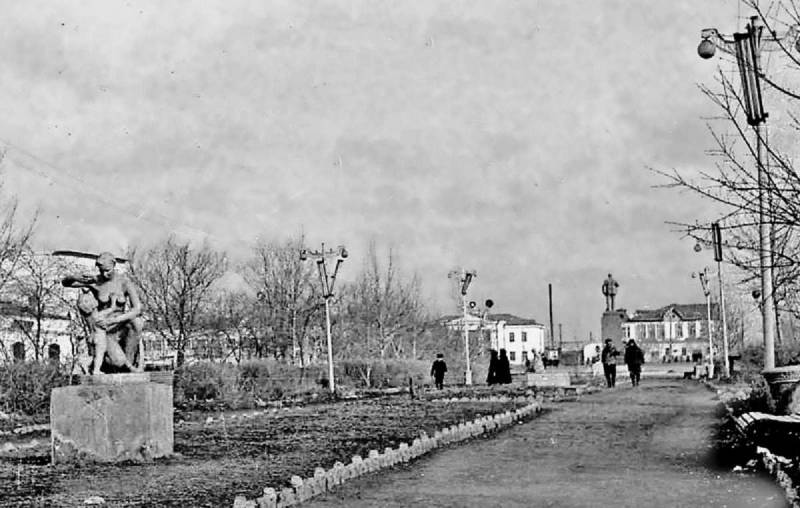 In 1970-s, the authorities of the Soviet Union seriously thought about the possibility of creating a German autonomy within the Kazakh SSR, but the Kazakh party nomenclature headed by the first secretary of the Communist Party of the Kazakh SSR Dinmukhamed Kunayev responded in time. With the support of the republican authorities, protests against the creation of German autonomy were organized and, ultimately, the Union leadership refused this idea. In the 1992 year, when Kazakhstan was already an independent state, the republican authorities took the course of de-russification and renamed Tselinograd Akmola.

Translated from the Kazakh language, the toponym “Astana” is translated as the capital. This is exactly how the authorities of sovereign Kazakhstan decided to officially rename Akmola in the distant 1998 year. But the decision to transfer the capital to Akmola was made earlier.

In June, 1994 of the year, Nursultan Nazarbayev finally decided that the power of the republic would go from Almaty to Akmola. 6 July 1994, the official decision on the transfer of the capital was made by the Supreme Council of Kazakhstan, and on December 10, the presidential decree on the transfer of the capital to Akmola was signed on 1997. 6 in May 1998 of the year Akmola was renamed to Astana, and 10 in June of 1998 of the year the authorities of Kazakhstan presented the city as the new capital of the republic.

After the transfer of the capital of Kazakhstan to Astana, rapid growth of the city began, which rapidly developed and soon became the second largest city in Kazakhstan. Huge funds were invested in the development of Astana, which contributed to attracting a large number of internal migrants from all regions of Kazakhstan. As a result, against the background of the general deurbanization of 1990-x - the beginning of 2000-s, Astana showed surprising growth rates for Kazakhstan.

In June, 2017, Astana officially received the status of a million-plus city - its population exceeded 1 a million people. In 1989, only a little more than 281 thousands lived in Tselinograd. Thus, the population of the city has quadrupled. 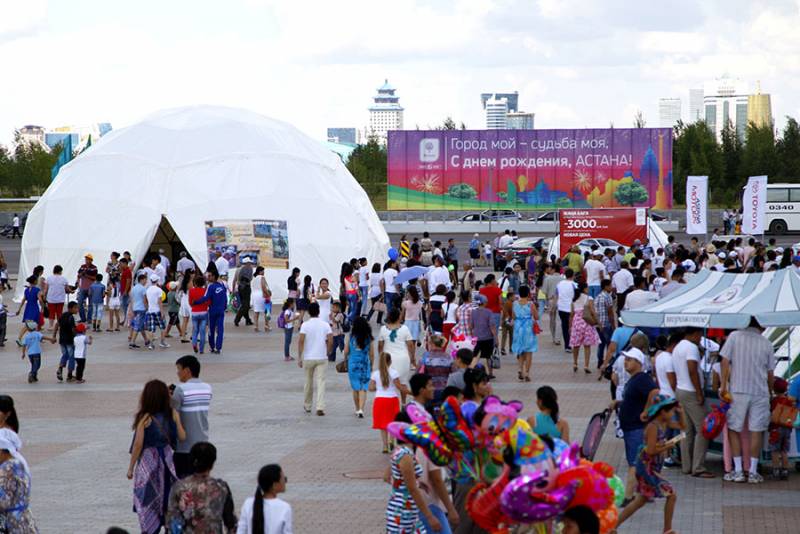 Thus, by the year 1989, Tselinograd was ethnically primarily a Russian and Russian-speaking city. But over the thirty years of Kazakhstan’s independence, the situation has changed beyond recognition. According to the 2018 of the year, ethnic Kazakhs make up 78,18% of the population of Astana - the absolute majority. Russian in the city now only 13,41%, and the Germans - 0,90%. Emigration to Russia also played a role (the Germans left for Germany), and natural causes due to the low birth rate, but the main factor in changing the ethno-demographic picture was, of course, the internal migration of Kazakhs from Astana to other regions of Kazakhstan. Against its background, the number of Ukrainians, Belarusians, Tatar Bashkirs was reduced, but the number of Uzbeks, Kyrgyz, Uighurs increased.

For thirty years, Astana has become a kind of showcase of modern Kazakhstan. When they want to demonstrate the well-being of Kazakhstan, especially in comparison with the neighboring Central Asian republics, a prosperous Astana becomes one of the first proofs. 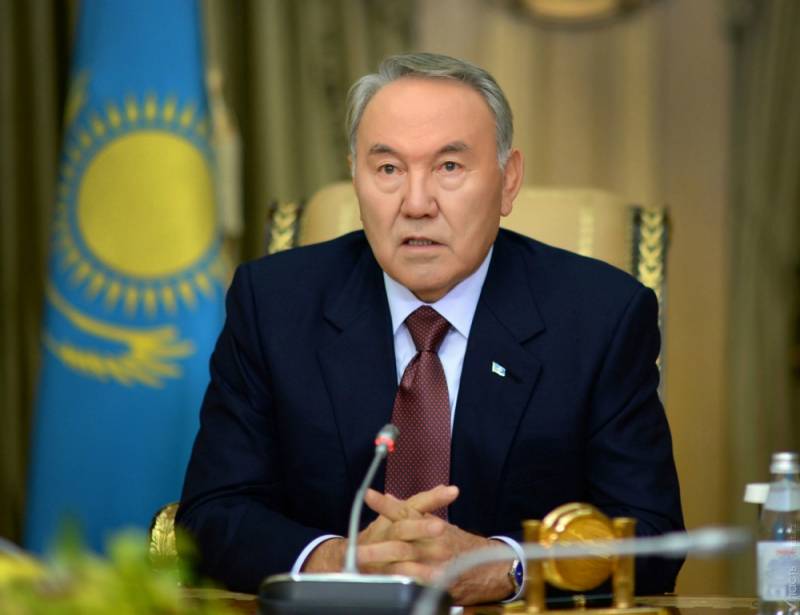 The proposal to rename was supported by the Parliament, after which on March 23 Tokayev signed a decree on renaming Astana to Nur-Sultan. Interestingly, residents of the city were not only officially allowed to continue to be called Astana residents, but also allowed not to change documents in connection with the renaming of the city, leaving the legal force of all documents in which Astana is a place of birth and registration.

Of course, the renaming of Astana to Nur-Sultan caused irony, especially abroad, but in Kazakhstan this event took place without any special excesses, except for a few small pickets and publications in the opposition press.