9 2019 June
9
June 9, 1989, thirty years ago, at the 79th year of his life in Moscow, the admiral died fleet, Hero of the Soviet Union Vladimir Afanasevich Kasatonov - an outstanding Soviet military commander, naval commander who commanded the Black Sea and Northern Fleets of the Soviet Navy during the Cold War. 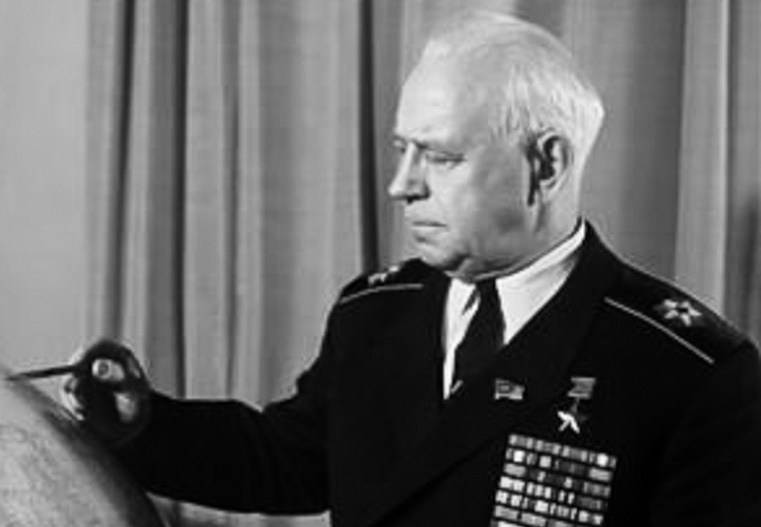 The beginning of the glorious path: the Soviet submarine fleet

Vladimir Afanasyevich Kasatonov is a representative of a remarkable military family who gave a whole series of real soldiers, defenders of the country to the Motherland.

The father of the future admiral of the fleet, Athanasius Stepanovich Kasatonov, was a full Knight of St. George. He received four "George", being a non-commissioned officer of the Ulansky regiment of Her imperial Majesty Empress Alexandra Feodorovna. The family of Athanasius had four sons and a daughter.

Vladimir Afanasyevich was born 8 (21) in July 1910, in Peterhof. From a young age he had no doubts about the choice of profession - the sea, and only the sea. In 1931, 21-year-old Volodya Kasatonov graduated from the Naval School named after M.V. Frunze, and in 1932 year - the commander classes of the training squadron diving named S.M. Kirov.

Thus, Vladimir Kasatonov was among those who stood at the origins of the combat power of the Soviet submarine fleet. At that time, the profession of a submariner was even more difficult and dangerous than today. Given the technical features of the submarines of the time, submariners very seriously risked their lives, carried out daily service in very difficult conditions. Nevertheless, Vladimir Kasatonov safely sailed until December 1932, as navigator and assistant commander of the submarine Commissar of the Baltic Fleet. 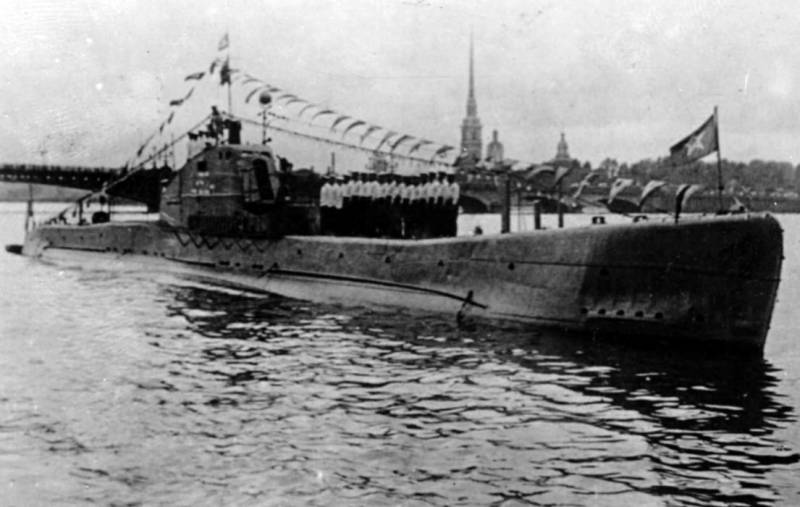 Noticing a capable young officer, the higher command decided to send Kasatonov to study at the E.Ye. Naval Academy. Voroshilov. At the academy, the hero of our article studied from 1939 to 1941 years, and then was the chief of staff of a separate submarine division of the Diving Training Team. CM. Kirov Baltic Fleet. Vladimir Kasatonov was to serve in Leningrad, where he met the beginning of the Great Patriotic War. Vladimir Afanasyevich participated in the defense of Leningrad from the attacking enemy troops.

Then Vladimir Kasatonov was transferred to headquarters work. No need to think that this was some kind of evasion from the front - Vladimir Afanasyevich, among other staff officers, planned the operations of the Soviet fleet, improved the combat training of the fleets, including the Pacific Fleet, which was ready for the entire war, waiting for an attack by militarist Japan.

During the Great Patriotic War, Vladimir Afanasyevich served as a senior commander-operator, then head of the operational management department of the Main Naval Staff. 24 May 1945, Vladimir Kasatonov, who was just 34, received the title of Rear Admiral, becoming one of the youngest Soviet naval commanders with admiral epaulets.

Thanks to the contribution of Kasatonov, among others, the Pacific Fleet in the summer and autumn of 1945 showed itself at the height of the war with Japan. In December, 1945 was appointed Kasatonov as Chief of Staff of the Kronstadt Marine Defense Region, and in 1947-1949. He served as Chief of the Maritime Division and Assistant Chief of the Main Operational Directorate of the General Staff of the USSR Supreme Soviet.

In October, 1949, Vladimir Kasatonov, was transferred to the Pacific Fleet already familiar to him to the position of chief of staff - first deputy commander of the 5 fleet, based in Vladivostok. In the 1951 year, 41-year-old Rear Admiral Vladimir Kasatonov was promoted to the next military rank of Vice Admiral.

In 1953, he was appointed first deputy commander - chief of staff of the Pacific Fleet of the USSR Navy. It should be noted that it was at this time that the role of the Pacific Fleet in the defense of the Soviet Union and its eastern maritime borders increased many times. The Pacific Fleet has become one of the main components of the country's defense against a likely enemy - the United States and its allies and satellites in the Asia-Pacific region. Moreover, the situation in the Pacific Ocean in the beginning - mid-1950-s was very tense - the war on the Korean Peninsula, the war in Indochina, the threats to the young Communist China. And in the event of a critical situation, it was the Pacific Fleet that was to respond to these challenges.

From the Black Sea to the Far North 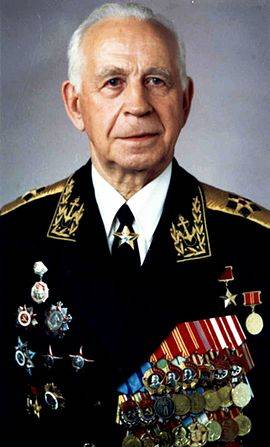 For the Soviet Union and its armed forces, the period 1950-x - the beginning of 1960-ies was the time of the emergence and development of new opportunities, the development of new strategies. By this time, the USSR had become a world power, on equal terms withstanding the United States. The influence of the Soviet state grew in the world, friendly countries appeared in Asia, Africa and even Latin America, which was formerly considered the patrimony of the United States. Naturally, special hopes were placed on the fleet in a situation of confrontation between the two great powers.

The Black Sea Fleet, commanded by Vladimir Kasatonov, was supposed to defend the southern frontiers of the USSR from a likely enemy - the NATO bloc. At that time, only one of the North Atlantic Alliance countries had access to the Black Sea - Turkey. However, the Black Sea Fleet was entrusted with the task of protecting the interests of the Soviet Union in the Mediterranean.

In February, Admiral Kasatonov's 1962 was transferred to command the Northern Fleet of the Soviet Navy. So the naval commander had to change the warm climate of the Crimea to the harsh weather of the northern seas. But Kasatonov enthusiastically took up increasing the power of the Northern Fleet. Under the command of Kasatonov, the fleet seriously increased its combat capabilities. Thus, Soviet nuclear submarines first entered the Atlantic Ocean, were sailed to the North Pole.

In the same year, 1962, the Northern Fleet, under the command of Kasatonov, conducted the most difficult exercises "Squall" on Novaya Zemlya. It was at this time that the nuclear submarine fleet, which is part of the Northern Fleet of the Soviet Navy, was developing at an accelerated pace. In 1963, Vladimir Afanasyevich personally led the campaign of the nuclear submarine "K-181" to the North Pole. The admiral took part in many other campaigns of the Soviet submarines, personally commanded military exercises.

In the 1964 year, taking into account the merits of Vladimir Afanasyevich at the head of the Northern Fleet of the USSR Navy, he was appointed First Deputy Commander-in-Chief of the Navy of the Soviet Union, and in 1965, he was given the rank of admiral of the fleet. November 25 1966, for the enormous contribution to the development of the nuclear submarine fleet, to strengthening the combat power of the Soviet Navy, Vladimir Afanasyevich Kasatonov was awarded the high title of Hero of the Soviet Union.

At the high post of First Deputy Commander-in-Chief of the Navy, the admiral of the fleet Kasatonov continued to work continuously to improve the capabilities of the Soviet navy, to improve the quality of the combat training of personnel. At the same time, Vladimir Afanasyevich often engaged in military-diplomatic work, making visits to friendly countries, negotiating cooperation with military fleets of other states. 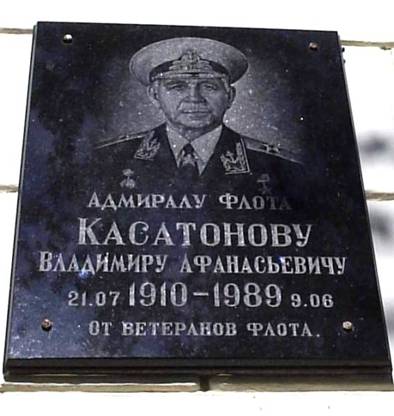 The position of First Deputy Commander-in-Chief of the USSR Navy, Admiral of the Fleet Vladimir Afatasyevich Kasatonov, was ten years old - up to 1974. In September 1974, the 64-year-old naval commander was transferred by the military inspector-advisers to the Inspector General Group of the Ministry of Defense of the Soviet Union. It is worth noting that throughout the 1958-1979 years. Vladimir Afanasyevich was elected a deputy of the Supreme Soviet of the USSR 5-th and 6-th convocations.

Vladimir Afanasyevich Kasatonov died in 1989, at the age of 78. He did not live to see the collapse of the Soviet Union, to which he devoted most of his life to service. Vladimir Afanasyevich did not see the division of the Black Sea Fleet, which he commanded at one time for more than six years. But now, thirty years after the departure of the famous Soviet admiral, Russia can once again feel pride in its fleet, which is literally recovering its power in front of its eyes and reasserting itself in various parts of the world.

In the footsteps of father and grandfather

The story of Vladimir Afanasyevich Kasatonov would be incomplete if we had not written about his famous son, our contemporary of Admiral Igor Vladimirovich Kasatonov. By the way, this year 10 February he turned 80 years. 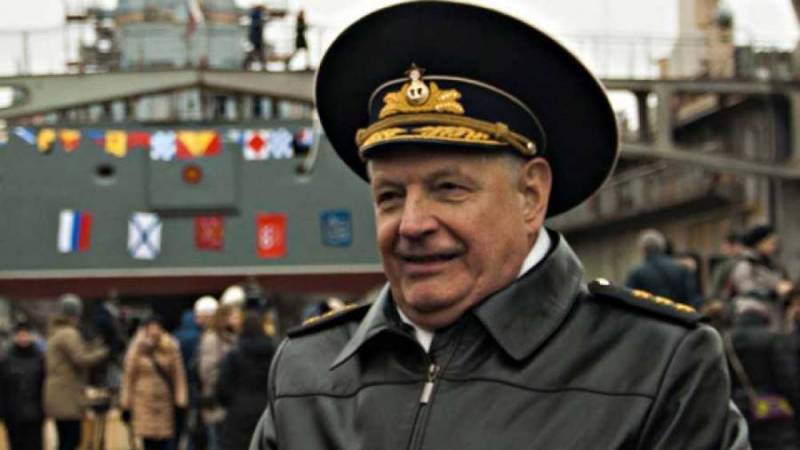 Igor Vladimirovich Kasatonov, like his father, gave his entire conscious life to service in the Navy of the USSR and Russia. He largely repeated the life path of his father - even the fleets commanded roughly the same: in 1988-1991. Igor Vladimirovich was deputy commander of the Northern Fleet of the Soviet Navy, and in 1991-1992. commanded the Black Sea Fleet.

It was at this time that the Black Sea Fleet was threatened by the division between Russia and Ukraine, but with the efforts of Igor Kasatonov almost the entire fleet composition was preserved for our country. Then, from 1992 to 1999, Igor Vladimirovich Kasatonov, like his father at one time, served as First Deputy Commander-in-Chief of the Navy. 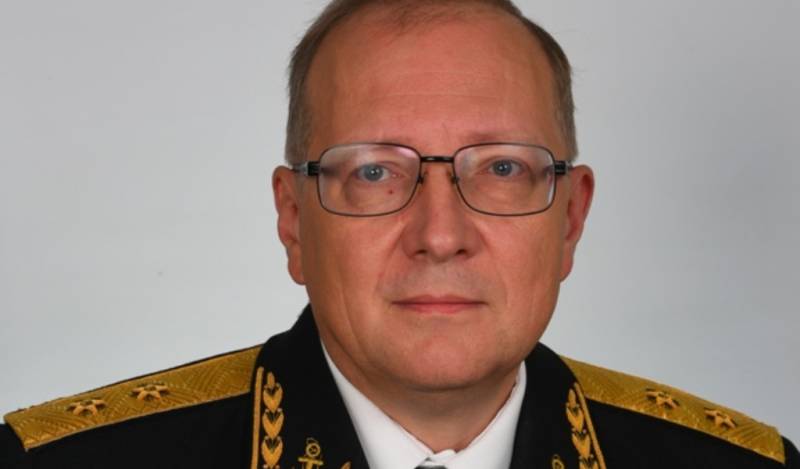