23 2019 June
30
Engineer L.V. Kurchevsky occupies a special place in stories Soviet weapons. He created a whole line of so-called. dynamo-reactive systems with ambiguous characteristics and potential, and received the support of the Red Army command, but later all these developments were abandoned. One of the promising systems proposed by Kurchevsky was a dynamo anti-tank gun.

General view of the PTR

At the turn of the twenties and thirties, L.V. Kurchevsky developed several projects of dynamo-active guns (DRP) of different calibers and different purposes at once. A characteristic feature of all these systems was the use of the same solutions, made in different scales and for different caliber. The least powerful PDDs had an 37 mm caliber and were positioned as anti-tank guns.

At the beginning of the 1930s, Kurchevsky introduced two 37-mm systems that were proposed for use as a light anti-tank weapon. The rifles were almost the same in design, but the “low-power” product had a shorter barrel length. PTR "high power", respectively, was slightly heavier.

Both guns were typical for Kurchevsky muzzle-loading recoilless guns with nozzles in the breech, designed for a special unitary shot. In 1932, two systems came out to be tested and received a good rating. The high-power ATGM / DRP also received a recommendation for adoption. In the series, it received the designation "K". In some sources, it also appears as "14-K".

The main and largest element of the Kurchevsky PTR was the barrel caliber 37 mm. PTR "high power" had 1250-mm barrel, small - 1220-mm. The barrel bore had 12 right-sided rifling. The rear half of the trunk received a developed fins. On the breech provided a thread to install a conical Laval nozzle for the formation of thrust.

On the muzzle of the trunk was attached tray used when loading. On top of the trunk consistently placed the store with the system of milling and bracket for the sight. Bottom under the barrel there were attachments for installation on a tripod, a frame with a trigger mechanism and control handles. After the installation of all these systems, the PTR Kurchevsky acquired a distinctive and recognizable appearance.

PDD new type received a special ammunition. The shot included an 37-mm armor-piercing grenade of mass 600 g with a 10-g charge of black powder. At the bottom of the projectile there was a special swelling leading belt. The projectile was placed in a burning sleeve of nitrotechny containing 190 g of smokeless powder. The bottom of the sleeve formed a destructible disc-obturator. The primer on the projectile was missing; ignition was external. The total mass of such a shot reached 900.

Due to the presence of the back of the funnel-nozzle loading with the treasury was excluded. In this regard, the gun received a characteristic system of ammunition. Over the barrel placed a tubular store for three shots. At the store there was a system of pushers for moving ammunition and dismounting into the barrel. Also provided a safety system, eliminating double loading. As part of the firing mechanism, there was a proprietary system for working with slats, containing 10 blasting caps.

A specially developed optical sight was mounted on the barrel near the breech. The product with an increase in 2x allowed to shoot at a distance from 100 to 500 m. The maximum shot range for the system itself reached 1 km. The eyepiece of the sight was moved for greater convenience of the gunner. 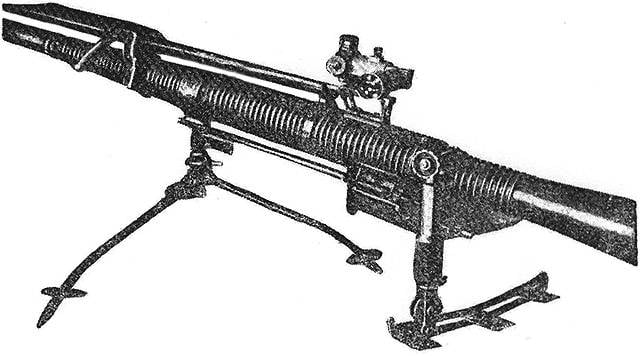 Controls, view from the gunner

PTR "K" was completed with a light machine-tripod, ensuring its installation on a suitable surface. Guidance was carried out manually. The machine had nuts for fixing the weapon in the desired position.

The calculation of the gun / gun consisted of two people - the gunner and loader. The first was responsible for finding targets, pointing guns and firing a shot. The task of the loader was to deliver shells to the magazine and perform reloading between shots. During the shooting, the crew was asked to sit on the sides of the gun. Shooting from a prone position was difficult or excluded. The lack of recoil allowed the theory to shoot from the shoulder.

The total length of the more powerful MFR with the front tray and the rear nozzle exceeded 2 m. The weight of the product in the combat position is 32 kg. The “low power” shotgun was slightly shorter and weighed 28 kg. Due to the existing recharge system, the maximum rate of fire, according to calculations, reached 15 rounds per minute.

The tool of a non-standard design differed the unusual principles of work. After deploying the PTR at the position, the loader had to consistently place shots in the tubular magazine, with a projectile ahead. Simultaneously, the installation of the bracket-cage with 10 capsules in the trigger was carried out. With the help of reciprocating motion of the corresponding handle, the front projectile was pushed out of the magazine onto a tray in front of the barrel and then sent inside the latter. The diameter of the shot did not exceed 37 mm, which allowed him to freely push through the bore into the desired position. 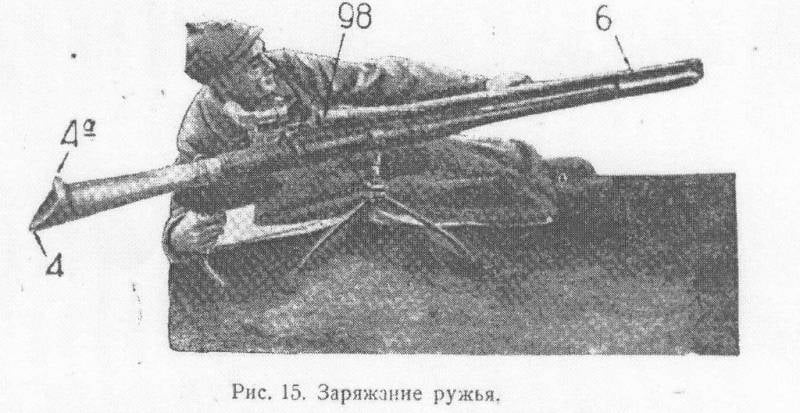 Pressing the trigger led to a strike on the primer; through the pilot hole in the barrel of the force of the flame hit the cloth sleeve and set fire to the propellant charge. The pressure of the powder gases inflated the leading belt of the projectile, as a result of which it entered the grooves. After that, the gases could carry the projectile in the direction of the muzzle. The disc disc obturator collapsed and flew through the nozzle along with some of the gases. The initial velocity of the projectile reached 525 m / s. The jet of gases from the nozzle compensated for the recoil, but did not allow it to approach the gun during firing.

On the ground and in the army

Experienced PTR / DRP L.V. Kurchevsky were made by the middle of 1932, and soon passed all the necessary tests. According to the results of field and military tests, the “high power” gun was considered more successful. It was distinguished by better ballistics and slightly greater penetrability. At the beginning of 1933, an order was issued to put the PTR into service and launch mass production.

During the tests, the PTR “K” pierced 25 mm of armor at a distance of 500 m. Such characteristics were considered sufficient for an effective fight against modern light and medium tanks. Also, successful use against heavy tanks was not ruled out - it was proposed to attack the chassis or vulnerable structural elements.

The production of new weapons was entrusted to the Leningrad plants No.7 (now Arsenal) and Bolshevik (now Obukhovsky Plant), as well as the Moscow Region Plant No. XXUMX to them. M.I. Kalinin. In just a few years, only about a hundred of Kurchevsky’s serial guns were manufactured. They were distributed between different parts of the Red Army and were used at the company level. Shortly after the start of implementation, complaints began to be received from the combatant units.

The fighters complained about the complexity of the application and the unreliability of the design. In particular, the propellant feed mechanism was regularly broken. The risk of double loading could not be ruled out, threatening to damage the tool and calculating injuries. Cases of nitrotex had a tendency to break through, and when fired, they did not always burn completely, hammering the barrel. A lot of problems were delivered by a jet stream from a nozzle, which was dangerous for people and unmasked a firing position.

PTR "K" in the Military Historical Museum of Artillery, Engineers and Communications

Nevertheless, the operation of the first domestic serial anti-tank gun continued. The situation changed only in 1937, after the arrest of the People's Commissar of Defense M.N. Tukhachevsky and other military leaders. In November, new tests took place, showing the real possibilities of the serial K / 14-K.

Two similar products performed 80 shots on the T-26 tank from a distance of 100 meters. 11 misfires occurred. One of the PTR / DRP failed due to skewed shot while reloading. Several dozen shots did not lead to the desired result. 37-mm shells left dents on the armor of the tank, but could not pierce it. For DRP "K" claimed penetration at the level of 25 mm at a distance of 500 m, but it could not overcome even 15 mm with 100 m.

These tests were followed by obvious conclusions. Anti-tank guns L.V. Kurchevsky was declared useless and detrimental to the re-equipment of the Red Army. They should be removed from service. Probably, the investigation of the sabotage case already begun has taken into account the results of the November firing.

The first Soviet anti-tank gun, which had come down to the adoption of weapons, was frankly unsuccessful. It had all the same problems and shortcomings as the other systems of L.V. Kurchevsky. Thus, the Red Army was able to get a light anti-tank tool, but it was not reliable enough, and besides, it was too quickly outdated. As a result, at the end of the thirties, almost all of the P / KP / K / 14-K PTR were written off and disposed of. Only a few remained, which became museum exhibits.

In 1938, the project “K” was finalized in the light of experience. Plant No.8 introduced into the design a full-fledged wedge bolt and unitary 37-mm shot with a metal sleeve. Such an MFR had some advantages over the initial design, but did not interest the army. Work on recoil-free systems stopped, and in the field of anti-tank guns, traditional designs came to the fore.