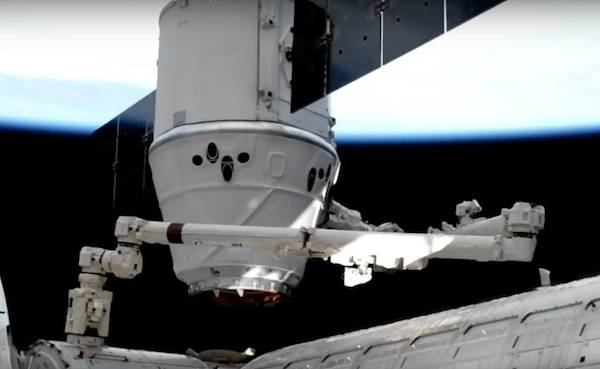 The American spacecraft Cargo Dragon, which is currently the only cargo spacecraft capable of not only delivering cargo to the ISS, but also returning it to Earth, splashed down in the Pacific Ocean and thus successfully completed its 17 mission.

The streaming took place in the normal mode and in the planned area, in 326 km from the American city of Long Beach (California). The ship returned almost two tons of cargo to the ground, some of which are the results of unique scientific experiments conducted on the international space station.

Cargo Dragon is a partially reusable ship and belongs to the well-known private company SpaceX, which operates flights to the ISS under a commercial contract with NASA.

In orbit, the ship spent four weeks. The launch of the mission took place on May 4, 2,5 tons of cargo were delivered to orbit at that time. The cargo included food, scientific and technical equipment, as well as materials for conducting scientific research on the ISS.

At the moment, 6 astronauts and astronauts are in orbit. They are Russians Oleg Kononenko and Alexey Ovchinin, Americans Ann McClain, Christina Koch and Nick Haig, as well as Canadian David Saint-Jacques.

A manned mission is scheduled for the end of the year.

Previously "Military Review" Reportedthat in Russia the crew of the Crew Dragon spacecraft was completed as part of the American astronauts Robert Benken and Douglas Hurley. In the Cosmonaut Training Center. Yuri Gagarin, they made acquaintance with the Russian segment of the station.

The first flight of the manned Dragon is scheduled for autumn 2019 of the year. It is expected that he will be able to deliver to the ISS before 7 people.