15 2019 June
54
Submachine gun: yesterday, today, tomorrow. What parameters should have effective bullets for submachine gunswhose goal is the fight against terrorists? If the SHA-12 assault rifle has a striking effect due to the 12,7-mm caliber, is it possible to create something else based on data not only from modern technology, but also historical Sciences? 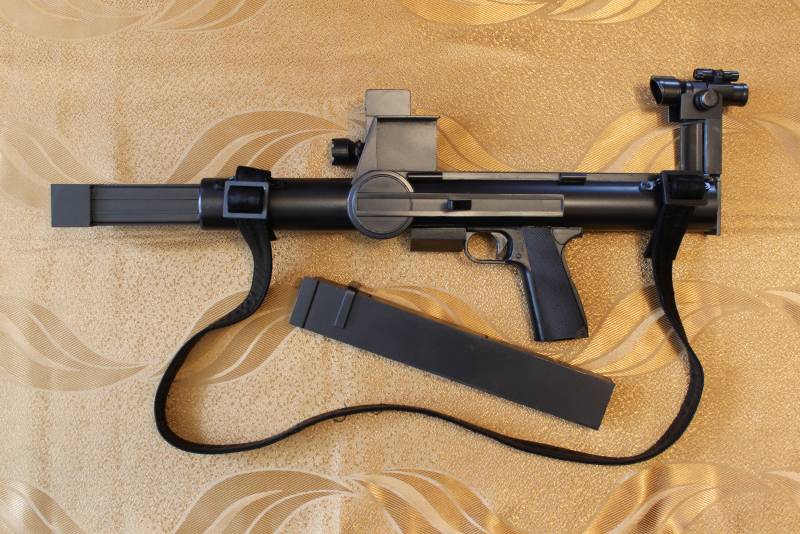 Model of a submachine gun chambered for with an H-shaped bullet in its trunk. Shop shot. Inside the front "superstructure" is the receiver of the store and the L-shaped pusher for cartridges, feeding them into the cylindrical swivel mechanism. In the back "superstructure" is a spring-loaded support for the store, which firmly holds it in its place. It also has a diopter sight. The bolt handle is connected with it by a system of plates that cover the hole in the receiver, so that dust and dirt do not get into it through it.

In the past, the material where it was told about a bullet in the form of a disk with a sharp cutting edge, it was said that even arrow-shaped arrowheads were found in ancient burial grounds. In the form of a disk! That is, they were designed exclusively for causing a wide incised wound. But there were also known purely armor-piercing arrows, which did not rotate in flight. These tips were narrow, faceted, capable of pushing the rings of chain mail, or also narrow, but flat, shaped like a chisel or a chisel. These were already calculated to sever the rings of chain mail. Well, a completely flat tip reduced the possibility of rebound when hitting the target at an angle. 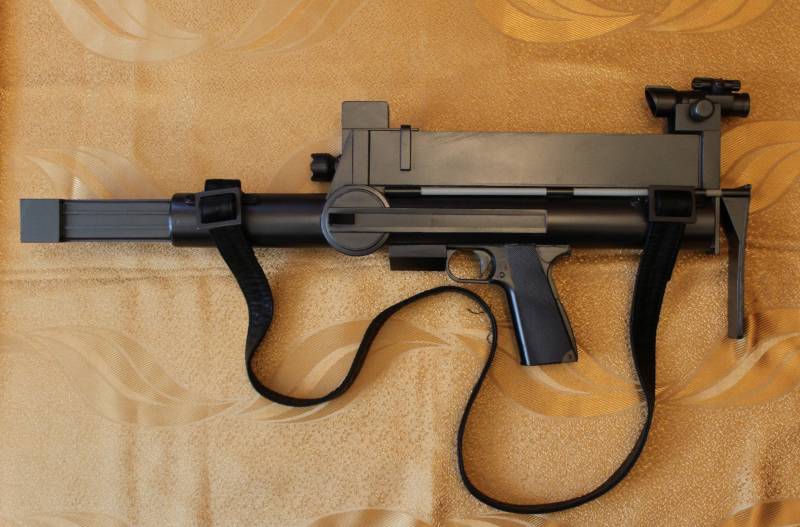 Submachine gun with magazine and butt. The reloading handle along with the shutter when shooting remains in place. It is connected by a gear with a swivel mechanism, and every time when the bolt is raised, it turns it by 90 degrees. At the same time, the cartridge gets inside it, which is pushed out of the store by the L-shaped lever.

It so happened that we look at the bullet to the bullet arms an extremely cylindrical shape, although previously square-shaped bullets were also known, intended for firing exclusively at “non-Christians” and “savages”. 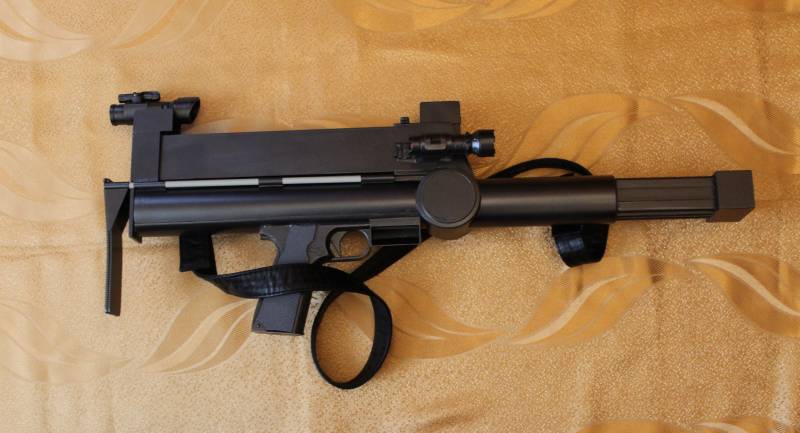 View of the submachine gun on the right with a magazine installed on it. A tactical flashlight is installed on the front “superstructure”. Immediately behind the trigger fence there is a cartridge case, through which the spent cartridges are thrown right down, which is very convenient for the shooter. It will be difficult to remake such a submachine gun for left-handed shooters, therefore it is better not to take them to the special contingent armed with these BCPs.

Well, what if you create a cartridge with a high-speed bullet of increased punching action, which could, like the arrow of an ancient bow, rotate under the influence of the oncoming air flow? By the way, after all, there are bullet-impellers for smooth-bore hunting weapons. Moreover, it would be good to make it so that this bullet, without violating all the Hague and other conventions there, would be small in itself, but caused very large wounds, so neither the bulletproof vest nor the analgesic injections would leave terrorist no chance. A challenge for TRIZ, isn't it? To make a small one large, not rotating - rotating, moreover, so that the tip was very sharp, but so that there were no problems with sending such ammunition into the chamber. 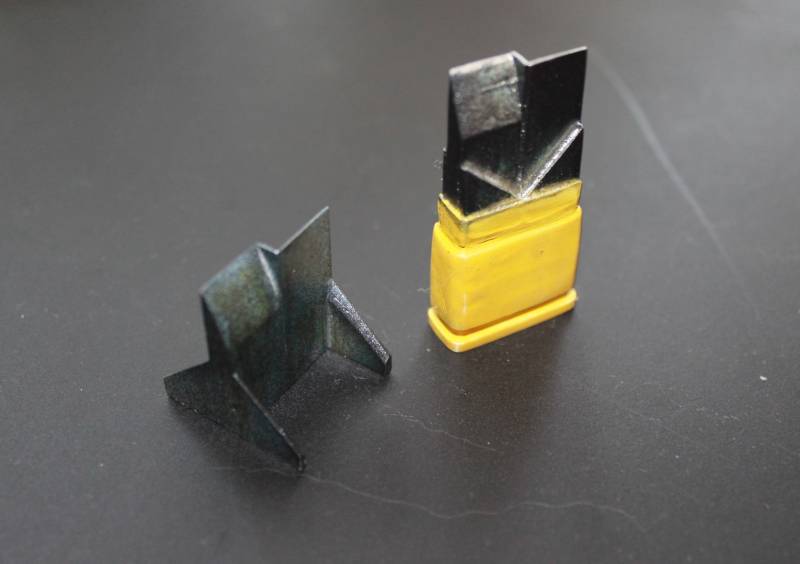 A bullet with stabilizers opened and a cartridge next to it along with a bullet.

Bullet with the profile of the letter "H"

And what if you make a multi-caliber bullet N-shaped in its profile and equip it with a multi-vane tungsten-molybdenum alloy tip? Moreover, it is clear that not the whole bullet should be made of it, but only its combat part, and it should be connected so strongly that the bullet would not disintegrate in the human body in accordance with international conventions. Hypothetically, it may well look like a flat parallelepiped with the front part in the form of two interconnected ... "chisels", sharpened in opposite directions. Between them, a jumper that prevents the flow of air. Something similar was used in the ancient arrowheads. Because of the difference in the directions of sharpening, they flew, rotating in flight. But in our pool there are four more drop-down stabilizers, which in any case will improve the accuracy of its flight, regardless of whether it rotates or not. Thus, she has not one, but several calibers at once: horizontal caliber 22 mm (this is the width of the bullet itself); vertical caliber 24 mm; diagonal gauge (i.e. diagonal between stabilizers) 32 mm. The caliber of the body itself bullets 4 mm. With folded "wings" 7,6 mm. Length xnumx mm. The maximum diameter of a flat sleeve 25 mm. Length xnumx mm. For attaching a bullet to it, a narrower Dultse is provided, which includes a bullet with stabilizers folded and pressed against it. That is, if it rotates in flight, the inlet will be a diameter ... not less than 9 mm. If it does not, but it will be possible to achieve satisfactory accuracy at a distance of 24-33 m, again, like most modern machine gun pistols, we will get an opening in the shape of the letter “H”, also large enough to prevent any criminal activity , even the most notorious terrorist. 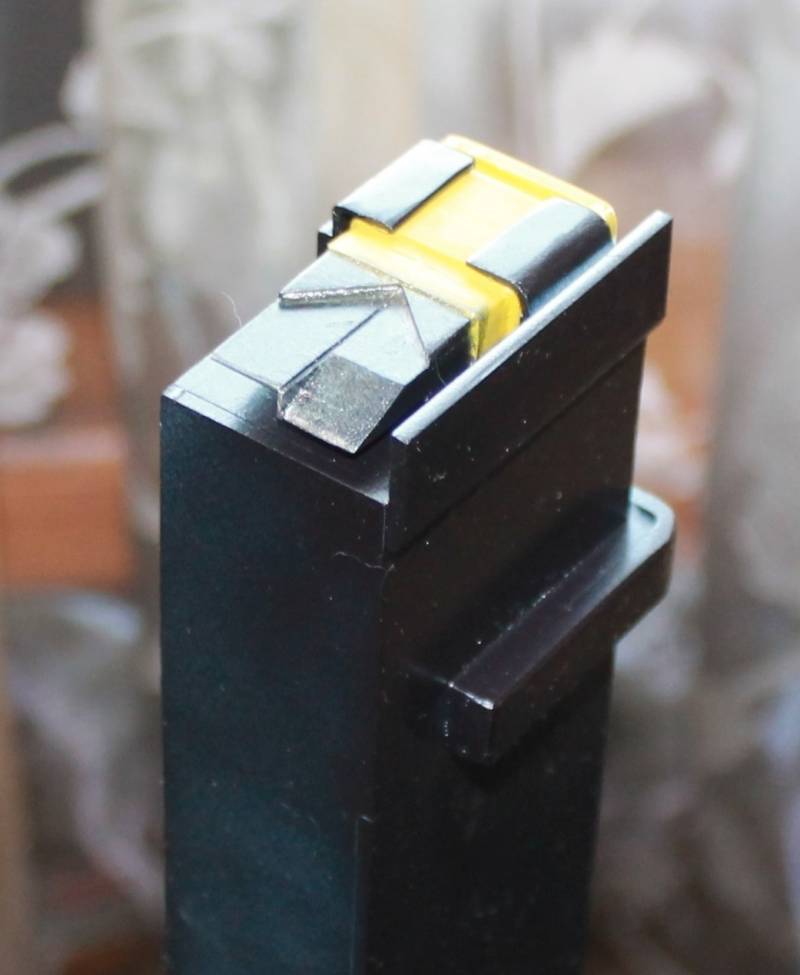 Shop with a cartridge on the feeder. On the right, there is a dust plate that closes the feeder from contamination when the magazine is attached to a submachine gun.

The cartridge turned out to be similar to a rifle and at the same time quite large. When the liner thickness in 9 mm 30 cartridges stacked in one row on each other, the 27 cm plus another spring and feeder should take it to the store, so the magazine for such cartridges protruding from the submachine gun from the bottom immediately turns it in an extremely uncomfortable weapon for the shooter. Therefore, a scheme was chosen with a horizontal location of the store, much in common with its installation on the German G11 rifle and the P90 submachine gun. But only it is inserted not in front, but on the left side. The cartridges are located in it vertically, with bullets down. Once inside the receiver, they are inside a special rotary mechanism of a cylindrical shape, with which each regular cartridge is mounted on the disillation line in the chamber. 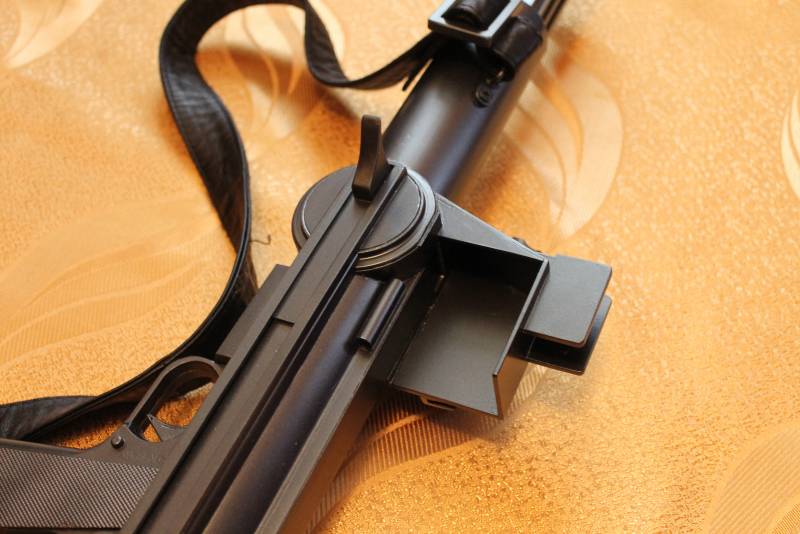 Front "superstructure" with a front sight. You can clearly see the rectangular hole for feeding cartridges into the turning mechanism. 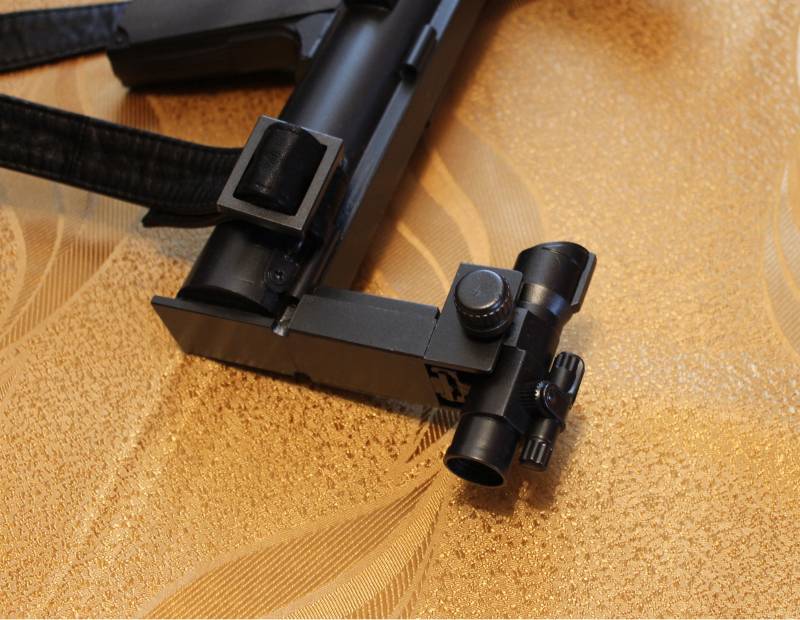 The receiver of such a submachine gun may well be a simple cylindrical shape, therefore the bolt to it is also cylindrical, on two springs and two guide rods. Well, let's say, like the old American M3. But in front of the barrel there is a rotary mechanism in the shape of a cylinder with a hole for a cartridge. The magazine is set so that its receiver with a cartridge on the feed tray is above it. The cylinder is connected by a connecting rod with a L-shaped spring-loaded pusher, which is located in the "superstructure" above the turning mechanism. When the bolt goes backwards, the cylinder turns and its hole is aligned with the hole for feeding cartridges. The L-shaped pusher pushes the cartridge from the magazine brackets, it falls down and is inside the cylinder. Moreover, inside his cartridge is additionally held by a magnet, so that when firing up, he could not fly out of it inside the receiver. 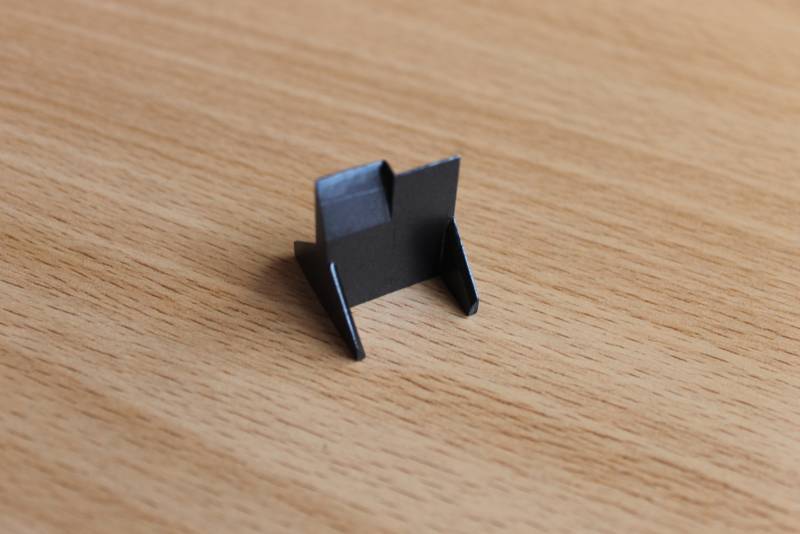 Once again a bullet close-up.

In front of the gate there is a rectangular protrusion with an extractor, which enters the cylinder bore of the turning mechanism and sends the cartridge into the chamber, after which the shot takes place. USM can be done and the trigger, passing the hammer with the drummer through the bolt, which will increase the accuracy of shooting. Although the shape of the chamber is simple, right behind it is a special “expansion chamber.” There is free space, and in front of the entrance to the trunk there are four protrusions resembling dozer blades, which, with their sharp edges, come under folded bullet stabilizers. 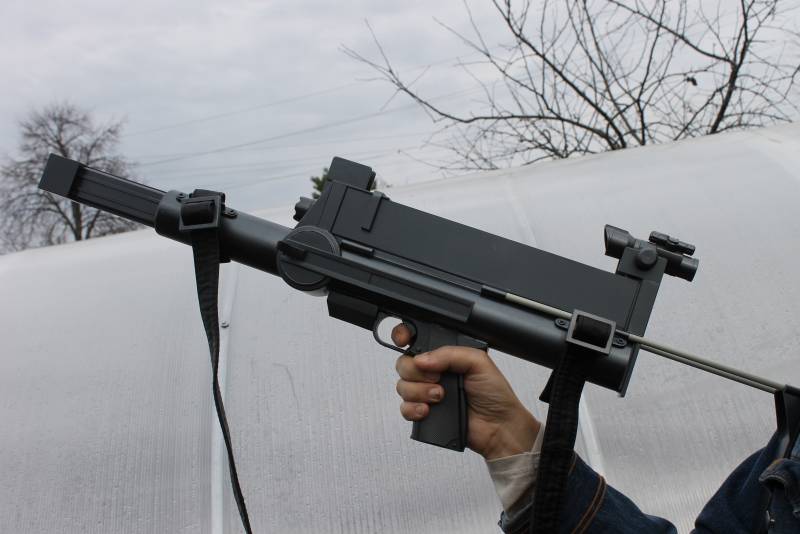 Submachine gun with extended butt. On its shop the latch and a dustproof plate is well visible. 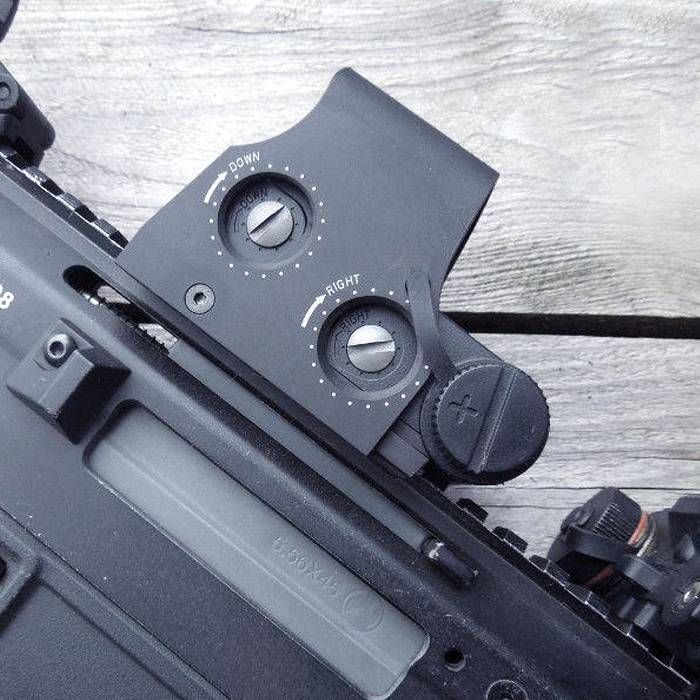 You can also install on it the collimator sight EOTech XPS3.

The liner contains a powder charge of two types of powder: 20% quickmatching and 80% slow burning, armored. When the primer ignites, the quick-burning powder immediately flashes, the pressure instantly increases and the bullet enters the barrel. The protrusions in the chamber straighten its stabilizers, they slide along their curved surfaces and fall into the side vertical channels of the letter “H”. Next begins to burn the main powder charge, which accelerates the bullet to the maximum speed. The front part of it is heavy, from a tungsten-molybdenum alloy. The back of the “parallelepiped” is hollow, and it is lighter. The pressure of gases expands its walls, and they fit snugly to the bore. 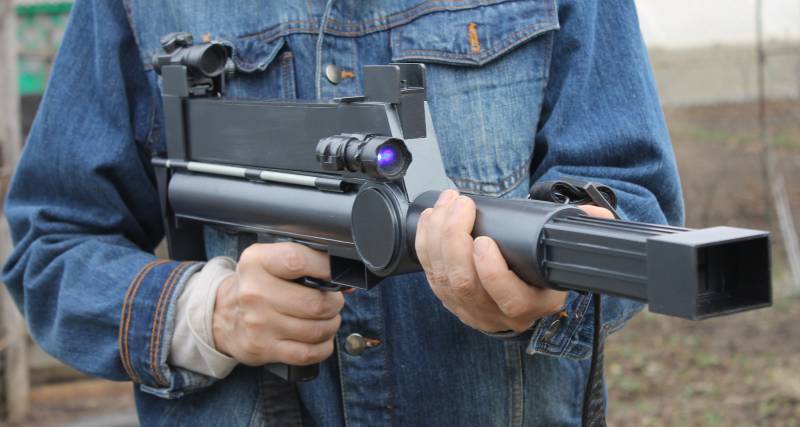 Despite the unusual nature of this weapon, it is convenient to hold it in your hands ... Although it would probably be possible to add a front handle for convenience.

Cooling on the principle of "Lewis"

The barrel itself may have a different design. The simplest can be ... a primitive steel bar with fins for cooling outside, in which a channel of the desired shape is made by the EDM method. In addition, it has two holes that serve to cool the barrel from the inside. That is, everything works the same as in the Lewis machine gun. When fired, the powder gases fill the muzzle-flame arrester, a vacuum develops in it, which draws air through the barrel. In principle, it may be thin-walled, repeating the profile of the bullet channel existing in it, but it would be best for process engineers to think about this. 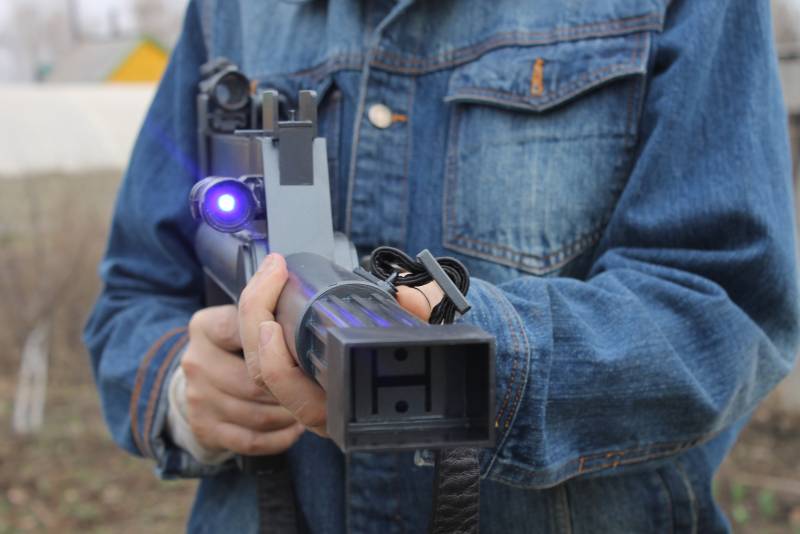 This photo clearly shows the muzzle cut and the round holes that cool the barrel, through which cold air is pumped through intensive firing. The trunk itself has a longitudinal ribbing on the outside.

Again, we immediately make a reservation that the “sample” shown here is just a mock-up, just like the mock of a completely hypothetical patron. All this is done in the "plastic", because in this way it is much easier to imagine than to look at the drawings and diagrams. The main thing is to determine precisely whether the bullet of such a device or the like will rotate in flight, hit the target at acceptable distances with acceptable accuracy, and prove to be more effective than the existing bullets of a traditional design. And if it does, then why wouldn’t she come into the world, and with it, and something like this, a submachine gun? 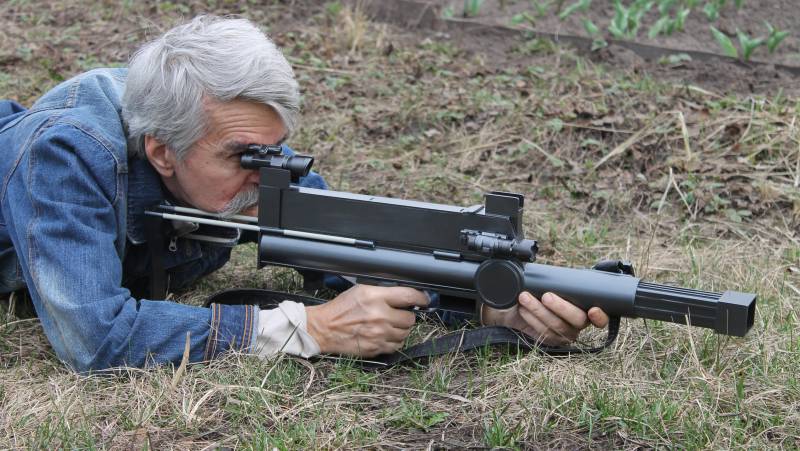 A big disadvantage of modern models of small arms are the shops protruding from below, due to which the shooters have to rise very much above the ground, being substituted for bullets. In this sample, due to the fact that the shop is located on top of it, you can shoot it close to the ground.

As for flaws, they also have this sample, and they are visible, as they say, with the naked eye. Powerful cartridge - a large length of the receiver and, accordingly, a large total length, because the trunk of this PP must also be long in order to properly disperse its high-speed bullet. Because of its shape, the muffler will most likely not be able to be put on the barrel, moreover, the length of the weapon with it will be quite transcendent. Although it is clear that such a powerful weapon cannot have a short length by definition.