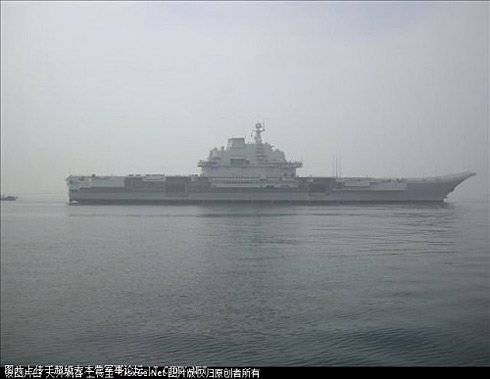 The first Chinese aircraft carrier Shi Lang (former Soviet Varyag) recently went out to sea for the eighth time since the start of sea trials in August last year. The extreme hike will last 13 days. The previous longest trip was 28 on November last year, then Shi Lang spent 12 days into the sea. The first launch of 11 in August last year took only three days, and the majority of the follow-up were 9-11 days. Thus, Shi Lang has so far spent a total of about ten weeks at sea. All flight preparations that were not yet completed were completed.

The aircraft carrier Shi Lang showed good results during extended sea trials. Three months ago, aircraft were seen on the flight deck. Obviously, in this way, the Chinese tried to make sure that the planes could move around the deck without any problems. Last year, China announced that Shi Lang would be a training aircraft carrier in the first place. He should enter service with the Chinese Navy by the end of this year. The Chinese are obviously planning to place up to 24-x fighters and 26-and helicopters on Shi Lang.

Shi Lang (Varyag) is an aircraft carrier class Kuznetsov, which the Soviet Union began to build in the 1980-ies. Originally, the Kuznetsovs were supposed to be 90000 ton nuclear-powered ships, like American aircraft carriers equipped with a steam catapult. Instead, due to the high cost and complexity of creating modern (American-style) aircraft carriers, the Soviet Union was forced to adjust its plans and, ultimately, 65 000 tonnes (at full load) were built without steam catapults and with springboard instead of them. Despite the abandonment of the nuclear power plant, aircraft carriers class Kuznetsov are a formidable structure. The 323-x meters long ship can carry dozens of naval Su-27 (so-called Su-33), X-NUMX anti-submarine Ka-14PL helicopters, two EW helicopters and two search and rescue helicopters. But usually the ship carries the 27 Su-36 and sixteen helicopters. The ship holds 33 tons of aviation fuel, which allows 2500-500 to carry out combat aircraft and helicopter flights. The crew size is 1000 people (or 2500 when fully loaded). There are only two ships of this class: the original Admiral Kuznetsov, who is in service with the Russian Navy, and the Chinese Shi Lang (Varyag).

China is believed to be building its first or even several aircraft carriers, but little is known about this project. Official statements suggest the need for two or three aircraft carriers in addition to Shi Lang. However, the construction of such large ships has not yet been seen at any shipyard.