29 2012 June
5
In Russia, 90-s of Boris Yeltsin tried to remove from power three times: twice in the 1993 year and then - more thoroughly, with careful and long preparation - in the 1999-m. In the latter case, the charges against Yeltsin were divided into five points: the Belovezhsk Accords (the collapse of the USSR); dispersal of the Supreme Council; the war in Chechnya; the weakening of the country's defense, which created a threat to national security; genocide of the Russian people. However, even such large-scale accusations did not lead to impeachment. There was not enough votes in the Duma. 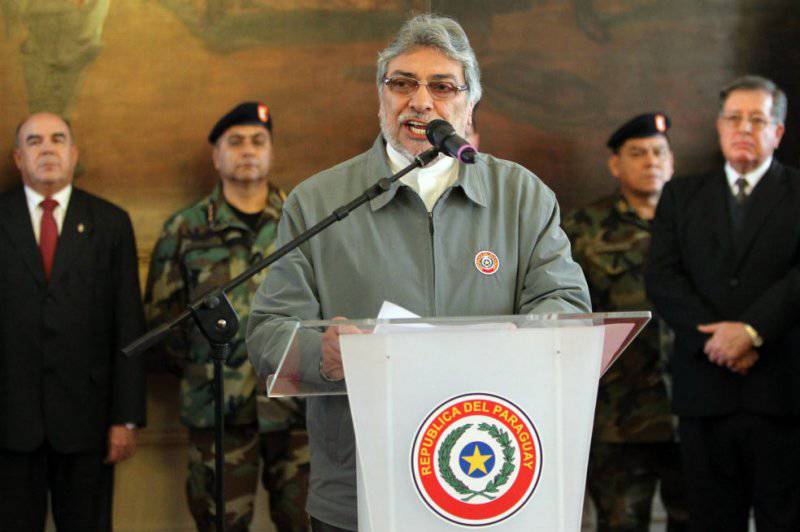 Summary: deputies in Russia are not able to impeach. Our president can go against the results of the referendum, ruin the economy, arrange hyperinflation, be the culprit of reducing the population in the country by a million every year - and remain in power.

Whether the case - in Paraguay. There, recently, in one day (including the night, because the parliamentarians worked day and night, overthrowing the disagreeable president), Fernando Lugo was removed from power.

Probably, the difference between the Russians and Paraguayans is that in our time during the impeachment the parliament was mostly loyal to the president, despite the significant role of the communists in it, but in modern Paraguay, the upper house of parliament (the senate) did not complain. Lugo, after all, was nominated by the Patriotic Alliance for Change, and there were two representatives of this party in the Senate. While Lugo’s opponents are more than enough: for example, only the Colorado party, from which Alfredo Stroessner, the famous enemy of communism, the friend of the odious Herr Muller and the friend of General Franco, was the 30 deputies . Another faction that plays a significant role in parliament, the “Genuine Liberal Radical Party,” with the support of which Lugo came to power, has 27 mandates. But she was disappointed in Lugo, and, obviously, agreed with the "Colorado". And this last one was looking for the slightest reason for the “soft” elimination of the unsuitable president. Eliminate the legal. The impeachment procedure was just legal. And on June 23, the Senate voted: 39 people voted for, 4 voted against. And Lugo agreed with the decision of the elected representatives of the people.

Why agreed? Because, firstly, Lugo is not Yeltsin, the government is not able to privatize and in general is not capable of such a vile thing; secondly, beyond Lugo, except for the very landless peasants oppressed in Paraguay by rich latifundists, no strength is worth it. Therefore, by the way, it is highly doubtful that Comrade Lugo returned to rule in Paraguay, despite the protests of many Latin American countries whose leaders declared a coup d'état under the guise of impeachment (and Comrade Chávez from Venezuela even blocked Paraguayan oil). Many neighboring states and ambassadors from Paraguay have withdrawn. Still, it’s hard to believe that a weak president with a single parliament would again be in power in the country. Most likely, as it was originally planned by senators “rebels” and their lobbyists, elections will be held in April next year, and the one who will be loyal to parliament and the latifundists will come to power by law. And at the same time the fraternal United States, without the knowledge of which matters with coups or impeachments in Latin America are hardly worth it.

The formal reason for starting the impeachment procedure in Paraguay was a clear provocation with shooting and victims. Far from being the first time, Paraguayan peasants are trying to master the lands that "legally" belong to the landowners, once received as a gift from the generous Herr Stroessner. The peasants believe that thirty years ago they were evicted from these lands illegally. However, Comrade Lugo is on the side of the law - as well as the court, which recognized the wrongness of the peasants and the plaintiff Mr. Blas Riquelme (by the way, the former leader of the Colorado party), who, having won the court, decided that it was time to clean up two hundred hectares of land in the reserve. The peasants, too, decided something, namely, to remain on the land, and as a result, two hundred people (maybe three hundred) went to the Kendendy Department of 15 on June and flew by helicopters. As you can see, Comrade Lugo sacredly honors the law, including judicial decisions. But the law turned out to be a double-edged sword.

Police officers were met with firing from a gunshot weapons. The media writes about the 17 killed, 80 or 100 injured. The first victims were the police - they were killed 6.

Neil Nikandrov: “The police were met with shots. The first victims were six agents of the Special Operations Group (GEO), including its commander Erven Lovero and his deputy, Sanchez Diaz. The shooting was carried out professionally, from a long distance, with bullets piercing body armor. Police officers who had instructions for a peaceful settlement of the problem had to return fire. Eleven peasants died, several dozen were injured. ” N. Nikandrov attributes the “operation” to impeach diplomacy and intelligence officers of the United States, who did not even need the help of the local fifth column in the form of non-governmental organizations - everything went so fast and, one can say, smoothly.

Certainly, of course, it is not known whether the US special services were behind this provocation (if they didn’t, they didn’t object: after all, Lugo spoke in 2008 against preserving the American military base in Paraguay, and in 2009, opposed the entry of 500 into the country from the United States, who intended to train the Paraguayan military), but one thing was clear - everything was done to declare in parliament: that the president does not cope with his duties. And then - the impeachment, which the press dubbed "express impeachment."

Objection to those who "gently" threw it, Comrade Lugo did not. “I obey this decision and am ready to answer for my actions as a former head of state”, - сказал former president of Paraguay. He also noted that the decision of the parliament “wounded not only him, but also democracy in the country”.

Four years ago, in 2008, Fernando Lugo promised land reform in the country - just in the interests of poor peasants. After all, it was he who was popular before the elections. But here’s the trouble: what Comrade Lugo wanted and promised to do, was not approved by the parliament, which is not entirely, but for the most part, the interests of the opposite group of the population — that is, those who have land, money, and agrarian Reforms certainly do not need. For example, gentlemen from the party "Colorado". The parliamentary discussion of the reforms announced by Lugo was postponed as far as the 2020s. Such a politically virtuoso parliament playing the president like a clarinet cost nothing to impeach.

27 June The Organization of American States (more precisely, the 25 countries from 34 that are members of the OAS) decided at an extraordinary meeting to send a special commission to Paraguay to study and analyze the current situation. However, this bureaucratic commission is unlikely to decide what. Meetings of supporters of Lugo were held in Asuncion - and they were successfully dispersed in a well-known democratic way: with tear gas and rubber bullets. June 23 police blocked the Paraguay Public Television building. Then the director of television was removed from his post - simply for the fact that stories about demonstrators were broadcast on TV.

So there is little reason for optimism. However, let's hope for the Bolivarian Chávez, who turned off Paraguayan oil. Paraguay is poor. This is far from Venezuela and certainly not Brazil, whose president Dilma Rousseff does not approve of parliamentary “Colorado” affairs, since she has already stated that Paraguay should be excluded from UNASUR - the Union of South American Nations. And the chairman of the Venezuelan group of the Latin American Parliament, Rodrigo Cabezas, said that the Union of South American Nations will agree on sanctions against the government created in Paraguay. By According to Comrade Cabezas, in overthrowing the legally elected President of Paraguay, the bourgeoisie, bending down before the interests of the American Empire, is guilty. In the Cuban Foreign Ministry too believethat the coup in Paraguay "has become another of the many encroachments on the self-determination of Latin American peoples", which "are carried out by the oligarchies" with the support of the United States.

The “soft” elimination of Lugo is indeed similar to conducting a quick and successful operation on a “lawful” coup, the scenario of which can then be applied in other countries. A few shots, a few victims, an impeachment - and a loyal candidate sits on the throne. To whom is loyal: to imperialist America? .. Or maybe everything is simpler: the little bloody deed of the latifundist Riquelme: was hired and instructed snipers, not regretting a few police officers, but at the same time agreed with a friendly parliament? Often the enemy is much closer than it seems ...

The coming days will show who is stronger: UNASUR and MERCOSUR - or the new authorities of Paraguay, who in the first few days of their rule gave the order to use tear gas, shoot rubber bullets and quarreled with all Latin American neighbors.

In the coming days or weeks, we will learn what America thinks about Paraguayan democracy. For now, State Department spokesman Victoria Nuland is only saidthat the US administration is "very concerned about the speed of the impeachment procedure in Paraguay." Answering a journalist's question, whether the US government considers that a coup d'état took place in Paraguay, she spoke very cautiously: “We do not define it that way at the moment”. The US State Department also She urged “All Paraguayans to act peacefully, calmly and responsibly, in the spirit of Paraguayan democratic principles”.

“The spirit of Paraguayan democratic principles” finally materialized: parliamentary forces and those behind them didn’t like Lugo’s attempts to increase taxes on the country's number one export product — soybeans — and redistribute farmland in favor of the poor majority. Hectares - latifundistam! Here is the slogan of Paraguayan democracy. And he will always find a response in the hearts of Washington.