All his life - only one MiG

20 June 2012 was a grand opening of a memorial plaque of an outstanding Soviet aircraft designer, Hero of Socialist Labor, laureate of Lenin and six State Prizes of the USSR, Doctor of Technical Sciences Mikhail Iosifovich Gurevich, took place in Moscow on Begovaya Street, 17. It was attended by Sergey Korotkov, General Director of RSK MiG, General of the Army Vladimir Mikhailov, the former Commander-in-Chief of the Air Force, Son of Anastas Mikoyan - Test Pilot, Hero of the Soviet Union Stepan Mikoyan, as well as representatives of the Military Industrial Commission under the Government of the Russian Federation, the Government of Moscow, and others officials.

It is impossible to list in one material everything that Mikhail Gurevich did and left to his descendants. It would have been enough even that in 1940, together with Artem Mikoyan, he designed and built the high-speed high-altitude fighter MiG-1, which, after some improvements under the MiG-3 trademark, was widely used on the Great Patriotic War fronts. In the post-war years, with the direct participation of Gurevich, the first Soviet-made MiG-9 jet fighter and the multi-purpose front-line fighter with an arrow-shaped MiG-15 were created. In February, the 1950 of its MiG-17 first broke the sound barrier, and the MiG-19 became the first Soviet-made supersonic fighter in the USSR.

The guy from Kursk Province

Mikhail Iosifovich Gurevich was born on January 12 of the year 1893 in the village of Rubanshchina, Sudzhansky district, Kursk province, in the family of a distillery mechanic. After graduating from the gymnasium in the town of Akhtyrka, Kharkov Province, he entered the Kharkov University in the Faculty of Mathematics. But he was forced to leave him in connection with student unrest. 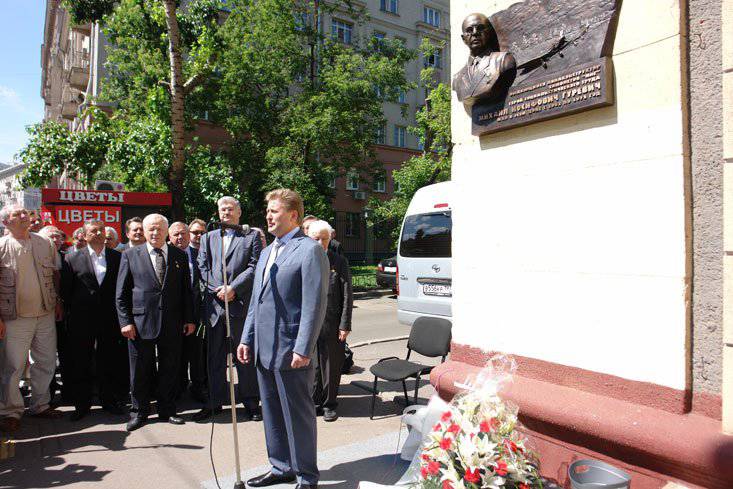 To continue his education in 1912, he goes to France, where he studies at the University of Montpellier. Perhaps it was there that his dream of building aircraft was born. After all, then the names of A. Farman, A. Santos-Dumon, F. Ferber, and other aviation pioneers were already on the ear. An inquisitive young man from Russia often went to a small airfield on the outskirts of the city to admire the wonderful machines that easily soared in the blue sky ...

However, due to the start of the First World War, Gurevich interrupts his studies and no longer returns from the holidays he spent at home. He works as a draftsman in various technical offices of Kharkov, and in 1917-m enters the Kharkov Institute of Technology at the Faculty of Mechanics. While studying with a group of students, he designs and builds two gliders, the Stork and the Boomerang.

After graduation, he obtained the qualification of a mechanical engineer in aircraft construction, but there was no opportunity to work in his specialty. And in 1929, he moved to Moscow, where his talent as an aircraft designer in the design bureau of plant number 39 was fully revealed. He also has time to work as a senior engineer at plant number 22, assistant chief designer S. A. Kocherigin at plant number 1.

In 1936 – 1937, a business trip to the United States at Douglas aircraft factories in the city of Santa Monica and Martin in the city of Baltimore. After returning, Gurevich participates in the development of the Li-2 aircraft (Douglas DS-3) at domestic enterprises and soon becomes the chief designer of the OKB-1 plant No. 84 named after. Chkalov. Then - the head of the brigade of the plant number 156.

A new milestone in biographies is the creation in December of the 1939 Special Design Department (OKO) headed by A. Mikoyan, where Gurevich becomes his deputy. In October, 1941, together with the plant number 1 and OKO, he was evacuated to Kuibyshev. But in connection with the organization of an independent pilot plant No. 155 (OKB-155) headed by A. Mikoyan, in March 1942 is transferred to a new enterprise.

During the war, Gurevich made a great contribution to the design and construction of experimental and experimental models of MiG-1, MiG-3, DIS-200, I-224, I-250, I-270, I-320, MiG-9, MiG fighters 15, MiG-17, MiG-19 and their modifications, many of which were produced in large batches for a long time and were in service with the Air Force. This contribution to the victory over the Nazi invaders in the Great Patriotic War is invaluable.

But after the Victory, no less difficult tasks arose. Gurevich plunges into their decision, writes a new page in the development of domestic supersonic aircraft. He is credited with the creation of multi-purpose all-weather fighter MiG-21 with a delta wing and MiG-23 with variable wing sweep in flight. As in the development of the aircraft E-155, the future of the MiG-25.

“We honor Mikhail Iosifovich Gurevich as the creator of our corporation, uniting around him the intellectual team, as the person who managed to develop world-famous airplanes,” said Sergei Korotkov, director general of the RAC “MiG”, opening the plaque. - This is his great merit and the memory that has been preserved in our hearts. As long as our OKB is alive, the name of Mikhail Gurevich will be aboard MiG aircraft. 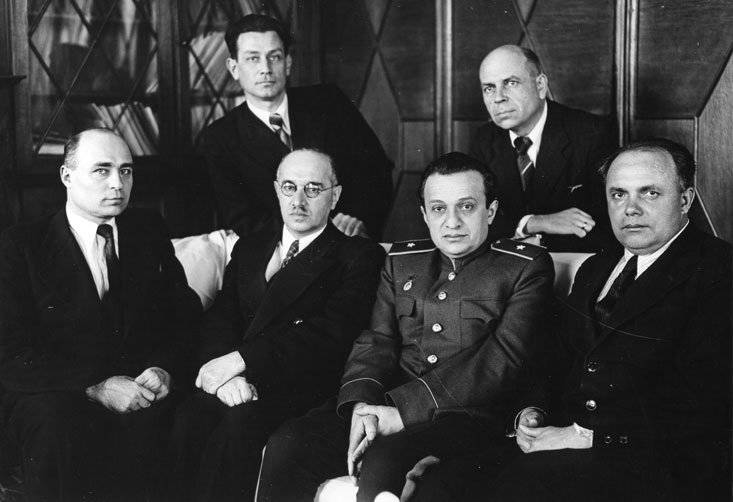 In turn, Air Force Commander-in-Chief Army General Vladimir Mikhailov emphasized that the MiG-1 and MiG-3 aircraft were the best Soviet fighters at the beginning of World War II. Mikhailov himself was lucky to fly for many hours on the cars of this brand (more than two thousand), and he always noted their excellent handling, maneuverability, and stability in flight. “The flight personnel of the Air Force loved and loves to fly MiG-made airplanes,” he said.

Test pilot, Hero of the Soviet Union Stepan Anastasovich Mikoyan remembered how Gurevich was not only a rare designer, but also a wonderful person with whom it was pleasant to communicate.

No less brightly many-sided talent of the aircraft designer emerged during the creation of a controlled rocket weapons.

“Even today, few people know that it is Gurevich who is the ancestor of the creation of cruise missiles,” says the deputy general director of RSK MiG, director of the engineering center OKB im. A.I. Mikoyan "Vladimir Barkovsky. - His technical creativity gave life to the whole OKB in Dubna, which he supervised.

Due to the broad technical outlook, personal initiative and organizational skills, Gurevich launched mass production and adopted the KS-1 air-to-air cruise missile, the K-10 supersonic anti-ship missile, the X-20 supersonic missile, as well as K-22 and their modifications that were located on the Tu-4, Tu-16, Tu-95K and Tu-22 rocket-carrying aircraft, KS-7 (FKR-1) missiles of the earth-to-ground type. Since March, 1957, he is already the chief designer for unmanned topics. Although I started working in this direction back in 1949 and led it until the 1961 year.

The very name of the MiG aircraft was born from the first letters of the names of two great designers - Mikoyan and Gurevich. And the cars they created became world famous. The MiG-15 turned out to be the most massive jet fighter (15 thousands released), the MiG-21 - the most massive jet supersonic jet fighter (more than 10 thousands). Speed ​​records set on the MiG-25 have not yet been broken.

This machine, perhaps, became the crown in the work of Gurevich - the winner of the Lenin and State Prizes, the holder of the Sickle and Hammer gold medal, four orders of Lenin, two orders of the Red Banner of Labor, and the Order of the Red Star.

In 2012, the world-famous brand MiG marks 73 of the year. Over the past time, about 450 projects of combat aircraft were developed, of which 170 was brought to life, and 94 machines were mass-produced. Domestic aircraft building factories built about 45 000 MiG brand aircraft, of which 11 000 were exported. Abroad under license released over 14 000 MiG fighters. These aircraft were shipped to more than 40 countries. World fighters such as the MiG-15, MiG-17, MiG-19, MiG-21, MiG-23, MiG-25, MiG-29, MiG-31 have earned worldwide recognition.

Of course, the collapse of the USSR painfully hit our aircraft industry, including the military. But RAC "MiG" with honor came out of the test and is now one of the leaders in the creation of combat aircraft complexes not only in Russia, but also in the world.

“Not long ago our company was unprofitable,” recalled Sergey Korotkov, Director General of RAC “MiG”. “But last year, for the first time, we showed a positive development trend. The production volume of the airline complex has increased, a solid order book has been created. Only in the 2011 year 12 shipped modern aircraft to various customers. In 2012, we plan to reach the figure of 24. And in the future - the task to produce a year for 36 aircraft.

The current order book of MiG RSK is over six billion US dollars. The state defense order is growing. A contract was signed with the Russian Ministry of Defense for the supply of 24 MiG-29K / KUB aircraft for naval aviation fleet. MiGs of the new family and MiG-29 modernization programs are in steady demand abroad.

And all this is the legacy of the great predecessors of the current designers and engineers of RSK MiG, among whom Mikhail Iosifovich Gurevich was and remains a star of the first magnitude.