Does the resignation of "army juicer" Salamatin shine? 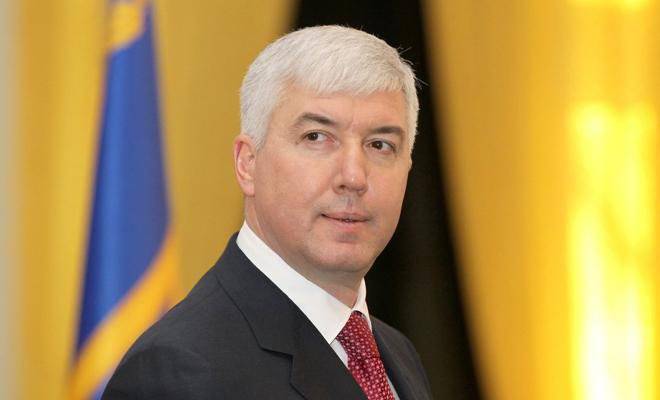 The events that have recently unfolded around the Ministry of Defense of Ukraine vividly confirm the tendencies that arose with the assumption of the post of Minister Dmitry Salamatin, and which immediately after this appointment indicated “Khvil”.

In particular, we wrote that immediately after his appointment to the post of minister, without delving into any nuances of the functioning of the Armed Forces, Salamatin “from the start” in the new position had a burning desire to spend an inventory in the Armed Forces, so that everything that can be done to sell. The first orders of the new leadership ordered the heads of the structures of the Ministry of Defense to urgently determine the land, facilities, equipment and property to be put up for sale.

On the basis of the very first decisions of Salamatin, we concluded: the task of this gentleman is not to strengthen, reform, develop the Armed Forces, but to drain everything that is possible from the army and “transform” this potential into living money. In fact, as the current adviser to Yanukovych, Mikhail Yezhel, at the post of minister, saw his highest mission in selling the army, this vision was completely and unconditionally preserved by the assignee. For both, the army is a big manger from which you need to quickly and efficiently squeeze everything worthy of a monetary assessment. (In fairness, we note that this is only a particular part of the general philosophy of the current government, looking at Ukraine exclusively as that very large feeder).

The difference between Ezhel and Salamatin is that the first is an amateur, an amateur. He acted well, squeezing the last juices out of the army, but nevertheless unorganized: he saw where he could snitch, and immediately sniffed. But we admit that there was a serious organized approach there. Plus, as a former military man, Yezhel sometimes, in the short breaks between the main occupation, thought about combat training. Well, since material resources were needed for something else, he forced the army to engage in any nonsense such as “mining” the parade grounds in military units and “forcing” water barriers in the form of roadside ditches at the checkpoint, ”this was called“ to carry out military training activities on the order fund ” . Well, at least, - as they say, on bezrybe and bra belt.

In Salamatin, firstly, as a person insanely distant from the army, there are no complexes about combat training, which means that nothing distracts him from the exciting activity called “deriban”. And secondly, in his actions the hand of the pros is felt - today at the Ministry of Defense everything is clearly organized, everyone knows very well how to act, i.e. how much and where to “unfasten”. Those who were stupid and did not drive into the dense Salamatin schedule, or did not master the established norms, have long since left for a citizen.

But the most important difference between Ezhel and Salamatin is that the first is the protege of Yuri Ivanyushchenko, he is “Yura Yenakiyevsky”, while Salamatin is known to be a member of the “family” of Yanukovich. The "family" did not long understand what the military sphere was different from the sphere of the military-industrial complex, and decided that it would be more convenient to centralize both "feeders", having concentrated the controls in one hand. Thus, Ukraine received the Minister of Defense, who, after his appointment, continues to steer and the defense industry, and to which the army as such, seems to be of very little interest.

The fact that even after a few months Salamatin very vaguely imagines the processes occurring recently in the Armed Forces, and their causes and consequences, is vividly illustrated by his performance in the Rada as part of the action entitled “On the state and prospects of development of the Military Organization and Security Sector of Ukraine "at the end of May this year. Then, Salamatin, not including brains, following the example of his elder comrades, identified the “culprits” as the main culprit of all the troubles of the army, and at the same time he managed not to mention a single number characterizing the state of the Armed Forces of Ukraine, and not to name a single strategic decision to correct the situation. Instead, Salamatin as a real clown defiantly rolled up his sleeves and said that he was going to "work", and was going to report back not earlier than in a year.

About the "work" of Salamatin we just find out today, when relevant documents began to get into the media. Breeding cattle and growing all agricultural structures in a row (sorry, according to the documents, except rice), including (quote) “berries, nuts and other fruits”, selling everything that is possible - from property to land and objects, is the lot Ukrainian military led by the great strategist Salamatin.

In his activities, we see only one “side” plus — redirecting the Ministry of Defense’s financial flows to the defense channel, the current minister at the very least provides for the repair and return to service of weapons and military equipment. It would seem, what's the difference that drives a comrade, the main thing is a positive result for the army! But even here there are two “buts” that do not allow us to climb with open arms and congratulations to the minister.

First of all, no one tells us how many parallel to the same equipment and weapons "disappears" from the army, being transferred to defense enterprises in exchange for repair services. And what's the point of having one fighter repaired, if on account of that ten was “lost”? And secondly, what is the point of repairing armaments, if specialists in the army disappear "as a class" who can turn to them? If the term "combat training" in the army is forgotten, how obsolete terminology?

And all this - against the backdrop of bravura assurances of some incomprehensible victories and achievements. As for combat training, I’m willing to argue with anyone for anything: autumn will come, traditional final exercises in the Armed Forces will begin, and in the troops they will spend fragmentary, miserable and "neutered", purely show-off exercises maximum to the battalion level, and then using the press -the services of the Ministry of Defense will turn this pure water into the media into powerful maneuvers of the Ukrainian army. We already did this at Yezhel, and his successor, Salamatin, has not yet given us a reason to think that his intellect is enough for his own creativity.

The press service of the Ministry of Defense, following the example of its chief, is dusting the eyes, calling out black with white with worthy surprise. The documents published by the media signed by D. Salamatin said that “in order to bring the types of economic activity that military units, institutions, institutions and organizations of the Armed Forces are allowed to carry out”, the Ministry of Defense developed a draft Resolution of the Cabinet of Ministers “On Amending the List of Economic Activities , the implementation of which is allowed to the military units of the Armed Forces ", according to which the army is allowed to breed cattle, sheep, horses, grow berries and fruits, engage in fish fishing ", etc.

And the press service of the Ministry of Defense today sends out a "refutation" in which it is toldonit: yes, it was not Salamatin who wrote about the Armed Forces! (The text of "refute" it is stated: "the aforesaid types dіyalnostі (rozvedennyam thinness, pigs, ptitsі) zaymayutsya INSHI vіyskovі formuvannya, SSMSC not included to the sphere upravlіnnya Mіnіsterstva Defense of Ukraine" - well, so clear the stump, for Salamatin and requested that he, but rather his soldiers were also allowed to breed cows). Well, who is this bredyatina calculated? In the text of Salamatina, the wording “Armed forces” sounds twice, and the Defense Ministry states that this is not a question of the army.

... And yet, with all the punctures of Salamatin, we do not think that this figure is expected by the immediate resignation. The scheme of emptying the army "trough" is too beautifully woven. And too, the current Minister of Defense harmoniously looks in the team of similar carefully selected “juicers” of Yanukovych in various spheres of activity of the state, headed by the head of the “family” himself.