C-70 "Hunter" was tested for a jump in Novosibirsk

25 May 2019
125
According to the news agency TASS, actually conducted the first flight tests of the Russian drone drone. We are talking about the UAV "Hunter". 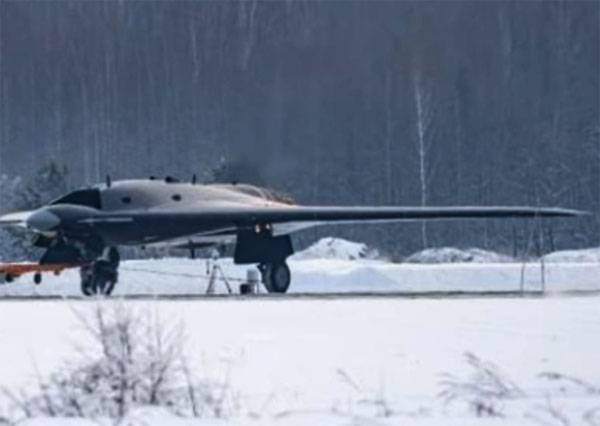 The report says that the Hunter heavy unmanned aerial vehicle first flew into the air. It is hardly possible to call this a full-fledged flight, since the purpose of the testers was to check the parameters when detached from the runway.

“Hunter”, having accomplished acceleration, demonstrated a so-called jump, climbed several meters, breaking away from the runway of the airfield of the Novosibirsk aircraft plant. After the jump, the drone, as noted, immediately landed.

In this case, the reports say that the shock UAV passed this kind of test in early spring. The exact date is not called.

Recall that the Hunter C-70 UAV, an unmanned percussion device that belongs to the class of UAVs of low radar visibility, is made using stealth technology. The tests carried out on the very same jump allowed the creators of the combat unmanned vehicle to check its aerodynamics, handling and operation of the onboard systems.

Ctrl Enter
Noticed oshЫbku Highlight text and press. Ctrl + Enter
We are
Reports from the militia of New Russia for 27-28 September 2014 of the yearDecember 2010 years. Russian March. Senseless and merciless? Notes not a Russian person
125 comments
Information
Dear reader, to leave comments on the publication, you must to register.