12322 CDBM Zubr returned to the Baltic Fleet after repairs

21 May 2019
38
Connection of the Baltic landing ships fleet replenished with a small hovercraft landing ship (MDKVP) of project 12322 Zubr returned from repair, Evgeny Kocheshkov. The ship arrived at its permanent base from the Baltic Yantar Shipyard, where it underwent repairs. This was reported by the press service of the Baltic Fleet. 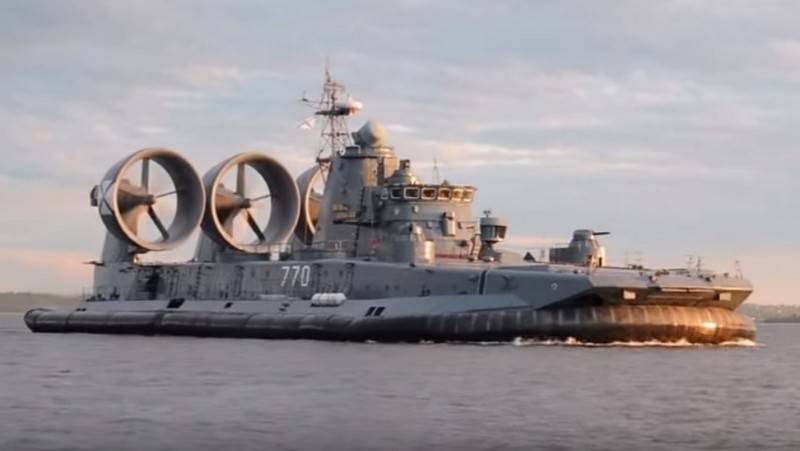 According to the report, on the ship Yantar on the ship, the engine installation was repaired, the ship’s rubber “skirt” was restored and the hull was repaired. The ship arrived at the base in the near future will be released to the training of combat missions at the sites of the Baltic Sea.

For fire support of the assault forces at the time of disembarkation, as well as for self-defense, an armament complex was installed on the ship as part of 2-x firing systems with unguided missiles 140-mm MS-227 "2 ammunition (132 ammunition ammunition) and two 30-mm six-barreled artillery installations AK-630 (3 000 rounds of ammunition) with a fire control system and 1 x 2 PU MTU-2 ADMS Needle-1М (from 8 to 32 ЗUR).

MDKVP is able to carry 3 main combat tank with a total mass of 150 tons and 80 marines or up to 10 armored personnel carriers weighing up to 131 tons or 8 infantry fighting vehicles and 140 marines, and also in the absence of armored vehicles, up to 500 paratroopers.

It is intended for receiving aboard from an unequipped or equipped coastal division of marines with military equipment, as well as transporting them by sea and disembarking on the coast of a potential enemy. MDKVP is able to land troops on 70% of the total length of the coastline of the seas and oceans of the Earth.
Military Reviewin Yandex News
Military Reviewin Yandex Zen
38 comments
Ad