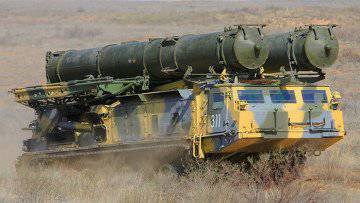 Deliveries of the C-300 anti-aircraft missile complex C-300PMU-2 to Syria, despite the previously concluded contract, were suspended at the direction of the Russian leadership, sources in the defense industry said.

Most likely, Moscow refused to supply the most powerful of the air defense systems sold abroad to Syria in order to appease the countries of the West and Israel, the manager of one of the defense industry enterprises told Vedomosti. As an example, he cited a similar incident that occurred in 2010, when Russia canceled the contract for the supply of C-XNUMPPMU-300 complexes to Iran, despite the fact that international sanctions do not prohibit the supply of such weapons to the Islamic Republic.

Also, the source did not rule out that the Syrians because of the sanctions from the Western countries simply do not have the means to pay for the air defense system, he said.

At the same time, Russia is still supplying the Beech M-2 medium-range air defense systems to Syria, the Pantsir-S short-range anti-aircraft missile-gun complex and the upgrading of the C-125 complex according to the Pechora-2M version. These weapons require consideration during the planning of NATO military operations against Syria, the source said.

The fact that the contract for the supply of C-300PMU-2 to Syria was concluded, according to a report for the past year, OAO Nizhny Novgorod Machine-Building Plant (NMZ), which is part of the Almaz-Antey Air Defense Concern.

As the newspaper VIEW, reported on Monday in Damascus, it was reported that the Turkish Air Force aircraft was shot down by anti-aircraft fire, not a guided missile.

Earlier, military expert Lieutenant-General Leonid Sazhin said that the Syrian air defense in the incident with the destruction of the Turkish F-4 fighter "Phantom" could use an anti-aircraft missile-gun complex (ZRPK) "Pantsir-С1".

On Tuesday, the Turkish authorities handed over to the UN a statement saying that the actions of the Syrian military, who shot down the Turkish Air Force aircraft, are a threat to peace and security in the region.

On the same day, in Ankara, they said that Turkey at a NATO meeting on Tuesday could offer the Allies to regard the destruction of the Turkish fighter by the Syrian air defense as a fact of attack on the entire alliance.

Meanwhile, US Permanent Representative to the UN Susan Rice called for a military operation in Syria.