26 2012 June
5
The aircraft was designed to study the flight characteristics of the trapezoidal wing of small elongation and aerodynamics of flights at speeds of 2460-3690 km / h. The United States military associated high hopes for this aircraft - the research should have greatly helped to increase the strength of the air defense system. Therefore, all information on the project at the time was completely classified.

The contract for the creation of an experimental aircraft was concluded with the company "Douglas" in 1947 year. Design, development and creation of the aircraft lasted about five years. During this time, the designers investigated more than 60-ty of various layout options and aerodynamic schemes, using propulsion systems available at that time. As a result, the company's specialists focused on creating the aircraft according to the classical scheme. As the power plant used two newest turbojet engine J46 (thrust to 37.8 kN) from the company "Westinghouse".

However, when creating an experimental aircraft, it turned out that the real thrust of the J46 engines turned out to be much less than the declared characteristics. It was necessary to increase the diameter of the installed engines, which led to the impossibility of using “J46”, as well as using engines with less pressure, which could barely disperse the Douglas X-3 “Stiletto” to the speed of one Mach. At this speed, one could only explore the vibration of the airframe and wing. The prototype was completed by November 1951. However, work on the change of engines and design modifications postponed the first flight of the Douglas X-3 Stiletto for almost a year. According to the contract, two copies of the experimental aircraft were ordered, but due to problems with financing and propulsion systems, one X-3 Stiletto was fully assembled, the second one, without completing, was sent for spare parts for the first sample. The first flight to the sky of the plane made 20 on October 1952 of the year, and the first supersonic flight took place in June of 1953. Research and flight continued until 1956, the maximum speed reached by 1120 km / h. Studies have shown that low thrust, high specific load on the wing and high take-off / landing speed make the aircraft very unsafe to operate, especially when taking off-landing.

Device and construction
The experimental “Douglas X-3” is a mid-plane, built according to the classical scheme with a trapezoid straight wing. The wing is made using a diamond-shaped profile of relative thickness up to 3 percent and has nose flaps, ailerons and slotted flaps with external hinge assemblies that are housed in elongated fairings. Due to the heavy loads on the wing (up to 1000 kg / sq. M), it was made of titanium with a solid cross section. The X-3 Stiletto fuselage has received a large elongation (the length of the fuselage is almost three times the length of the wing), which ends in a sharp nose and smoothly turns into a low-profile pointed lantern. To ensure maximum aerodynamic properties of the fuselage, the cockpit was performed with minimal comfort - the test pilot had to sit in the cockpit with a slight inclination. Because of the shape of the fuselage, which has a front elongated-sharp part and a firm tail end, the experimental aircraft was called unofficially - a flying pen. The pilot cabin is built into the middle part of the fuselage, without disturbing the overall geometry of the hull, and equipped with a wind-proof structure having a triangular cross-section. The design consists of 2-x plexiglass sheets. The seat of the test pilot is shifted to the left and back relative to the axis of symmetry. During the ejection, the chair is shot down, it has two stabilizers and a machine gun that automatically separates the pilot from the ejection seat when the height of the 3.4 is thousands of meters. If the ejection occurs below this height, the machine gun separates the pilot three seconds after the separation of the seat from the aircraft.

The aircraft was designed to study the characteristics of the wing at high speeds, more than three Machs, so the cockpit was equipped with an air conditioner with an evaporator of water type and artificial cooling of the forward fuselage, for which they used forced circulation of aviation fuel under the hull.

The tail fin is made according to the normal scheme of a symmetrical type with a rudder and a controlled stabilizer. The tail assembly is controlled by an irreversible hydraulic drive. Chassis - three supports, ending with one wheel, fully retractable into the fuselage of the “Douglas X-3“ Stiletto ”.

This aircraft is an experimental flying laboratory; they installed various equipment and instruments with a total weight of 550 a kilogram. Pressure characteristics were taken from 850 points on the entire surface of the aircraft, mechanical stress characteristics were taken from 185 points, and temperature data at 150 points. Installed low-power engines "J34-WE-17" with a pressure up to 15.3 kN, equipped with afterburner chambers, are located in the central part of the fuselage. Between them there is a fuel tank. Air intakes with a flat-oval cross-section of unregulated type, placed on the sides of the fuselage, in its upper part, just behind the cockpit. They have gaps serving as the removal of the boundary layer from the hull plating. Adjustable engine nozzles are made at the end of the central part of the fuselage under the mount plumage.

In 1956, the Douglas X-3 Stiletto trials were completely completed. With him removed all the equipment and equipment and give the Dayton Museum of the United States Air Force in Ohio. And although it was not possible to carry out all the planned studies, of the most significant contributions of the “Douglas X-3 Stiletto” to the development aviation, suddenly becomes the landing gear, namely the tire material of the wheel. After all, the plane had to land and take off at speeds of more than 250 km / h. The Douglas X-3 Stiletto was one of the most difficult to build X-series aircraft, but visually turned out to be the most attractive experimental aircraft of all built in the United States. 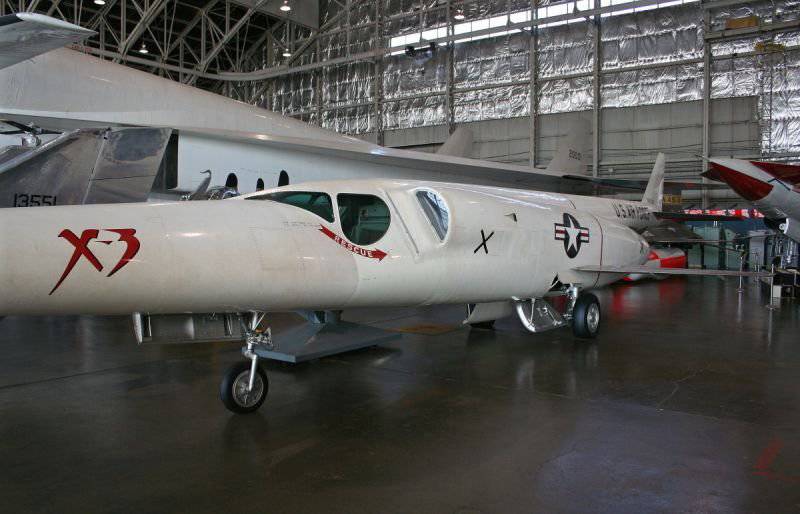