1 May 2019
92
Compact and speedy weapon in demand today in many countries of the world. Often light and compact submachine guns are in service with special forces units, and are also widely used by special services and companies that are responsible for the safety of top officials of the state, high-ranking figures or simply very rich people. Successful examples of modern weapons of this class include the MP9 submachine gun manufactured by the Swiss arms company Brugger & Thomet.


The model is compact in size, the submachine gun is not much superior to the Glock 18 and Beretta 93R automatic pistols widespread in the world, but in terms of tactical and technical characteristics and combat capabilities, it can easily compete with the Israeli Mini Uzi pistol or the classic of the German weapons school - Heckler & Koch MP5 ... Compact size and light weight make it easy to carry the MP9 submachine gun under outerwear: jackets and raincoats. According to the assurances of representatives of the developer company, the guards of the President of France use the submachine gun as a concealed carry weapon. At the same time, the Swiss submachine gun compares favorably with many of its classmates with a huge rate of fire, which, according to the developers, reaches 1100 rounds per minute. Therefore, a magazine designed for 30 rounds can be fired at the enemy almost instantly.

The MP9 submachine gun was the first model of Brugger & Thomet's firearms, which, prior to its appearance, specialized in silent firing devices (PBS), various tactical attachments, accessories, optics and ammunition. The Swiss company Brugger & Thomet has been manufacturing mufflers since 1991. The company has been producing small arms for the last 15 years and the first model of Swiss gunsmiths was the MP9, chambered for the 9x19 mm Parabellum pistol cartridge, which is widespread in the world. 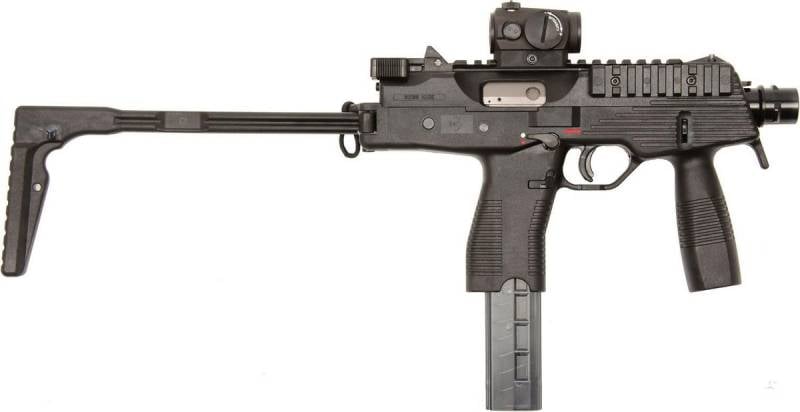 At the same time, the submachine gun has Austrian roots, but it is wrong to call the MP9 a copy of the Austrian Steyr TMP (from the English Tactical Machine Pistol), developed by the famous company Steyr Mannlicher in the arms world and produced since 1992. In the early 2000s, the production of the Steyr TMP submachine gun in Austria ceased. At the same time, Brugger & Thomet acquired a license, production rights and received all the technical documentation for this model. The Swiss gunsmiths took the Steyr TMP as a basis and brought the weapon to a commercially successful project, making a number of changes and improvements to the design, in particular, improved fuse and added a right-folding stock. The main changes, one way or another, concerned the tactical body kit. For example, Brugger & Thomet offers weapons along with a standard silencer.

Today the MP9 is a compact and powerful weapon. The first pancake of Swiss engineers from Brugger & Thomet did not come out lumpy, they adapted the Austrian model to modern needs and set up their own production. The updated submachine gun is in demand today on the international market. Moreover, B&T now produces a huge range of small arms from pistols to sniper rifles, the company's website contains 12 models of firearms (excluding modifications). 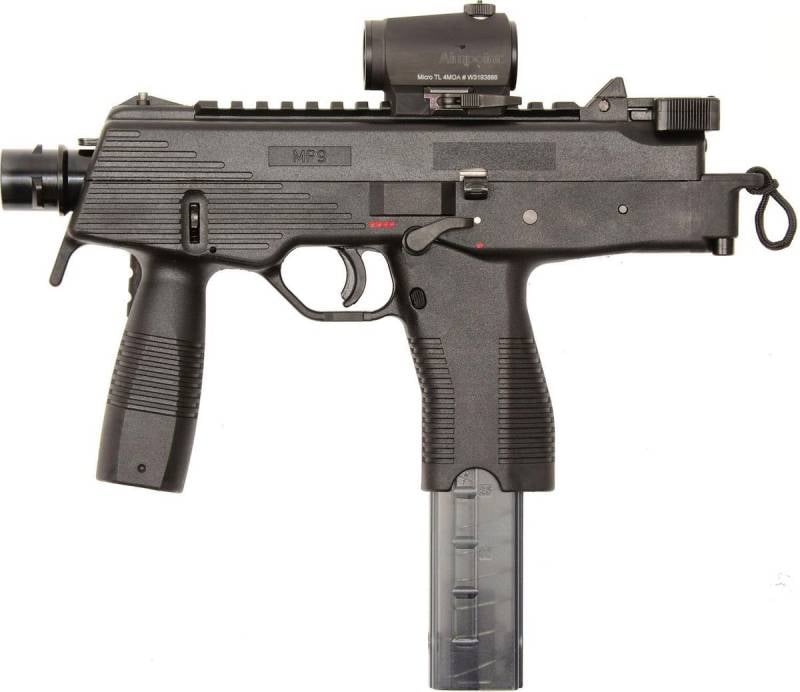 Automation of the Swiss MP9 submachine gun is built on a circuit using the recoil energy in the short course of the barrel. The firing of weapons is carried out with a closed bolt, this decision has improved the accuracy of firing single ammunition. In the closed position, the bolt of the submachine gun covers the barrel approximately half its length. Designers placed the cocking handle in the rear upper part of the body of the submachine gun, while firing the handle remains stationary.

The design of the MP 9 uses a rather rare method of locking the barrel - turning it around its own axis by 45 degrees. From a technical point of view, this is not the simplest solution, which provides the weapon with a good degree of reliability of the automation and allows it to achieve super-rate of fire, which is one of the distinguishing features of the Swiss submachine gun. In addition to the complexity associated with manufacturing technology, experts highlight another feature. A certain difficulty is the installation of the PBS (it cannot rotate with the barrel), especially for this, the designers of Brugger & Thomet had to install a small branch pipe - a false barrel, to which the muffler is attached.

The basic mechanisms and automatics of the MP9 submachine gun are hidden in a very durable case of glass-filled polyamide. The robust housing, consisting of two main parts - the upper and lower, effectively protects the inside of the weapon from the ingress of particles of dirt and dust, which would prevent the automatic operation of the submachine gun. In the lower part of the body are located the firing mechanism and safety device, in the upper part are installed the barrel, bolt and grip of the submachine gun. 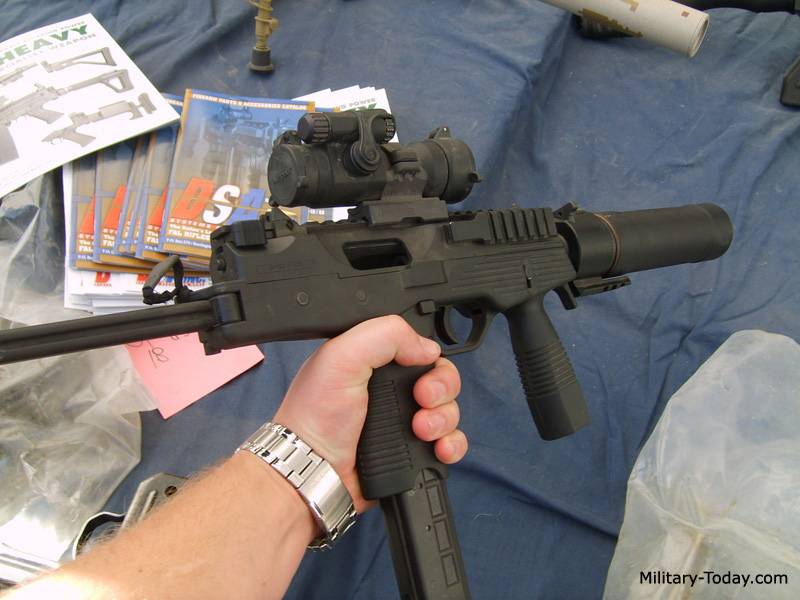 The MP9 is powered from B&T's standard dual inline box magazines. Magazines are inserted into the receiver, which is located in the fire control handle (pistol-like). The shooter has magazines for 15, 20, 25 or 30 rounds, which he can alternate to solve a specific combat mission. All magazines are made of translucent plastic so that the shooter can easily control how many cartridges are still in the magazine.

The weapon is equipped with Picatinny rail guides, which are installed on the sides, top and bottom of the submachine gun and are used to install various body kit elements. At the same time, experts highlight the rich standard equipment of the model. You can purchase a submachine gun immediately with an additional front grip for stable holding of the MP9 when firing, a collimator sight, a laser designator and a standard PBS model, the production of which was previously specialized in the Swiss company Brugger & Thomet. Standard sighting devices of the MP9 submachine gun are represented by a front sight and an adjustable diopter.

The submachine gun received a plastic butt - shoulder rest, which easily folds onto the right side after pressing a special button. You can fire a weapon with a folded butt, which does not interfere with the shooter. On the left and right sides of the MP9 there are buttons that allow you to switch the firing mode from single to automatic. The magazine removal key is located on the left side of the submachine gun.

Advantages and disadvantages of MP9

Experts point out one of the drawbacks of MP9, which manifests itself when firing with a device for silent firing - a strong gas contamination in the area of ​​the shooter’s face. This is due to the compact size of the model, the submachine gun is located very close to the face, near which the spent powder gases collect. According to weapons experts, this is quite a serious lack of a silenced configuration, especially if the weapons have to be used in a small closed room or in a car with closed windows. Also, some experts point out the disadvantage associated with the low survivability of the loading arm, which can quickly fail, which is painful for military weapons. At the same time, experts note that the Swiss MP9 according to such an indicator as shooting accuracy bypasses the American MAC Ingram Model 10 submachine gun, as well as the Israeli Micro Uzi, being lighter, more compact and comparable in accuracy to the German HK MP5K PDW submachine gun, which is a larger sample of small arms. 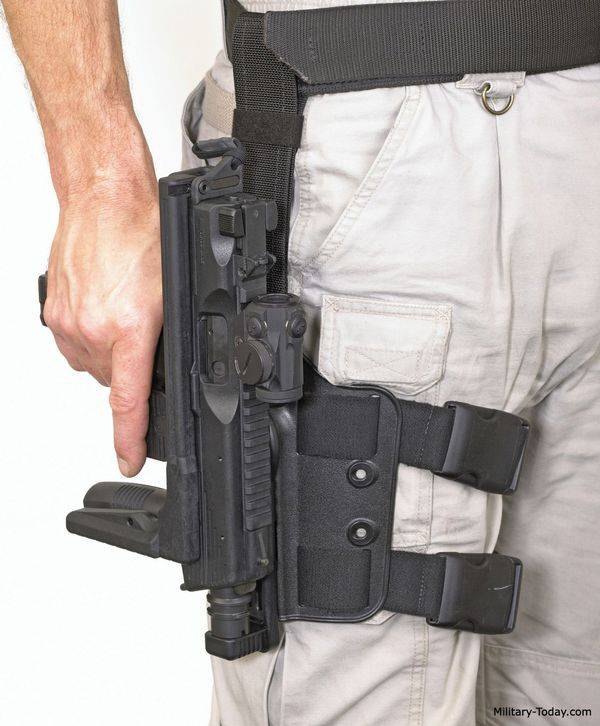 The main consumers of the Swiss MP9 submachine gun are special police units and special services. The weapon is suitable for carrying out assault operations, the release of hostages, for hidden socks, use in small enclosed areas (preferably without a silencer). It is here that the compactness of the model, which can be easily hidden under clothes, manifests itself best of all; the submachine gun in this case does not attract attention, merging with the silhouette of the human body. Weapons can be used with one hand, without using a two-handed grip (due to lightness and compactness), also a submachine gun can be easily used simultaneously with a protective shield. Effectively using MP9 will be able to those special forces, who have to work at height.