Antarctica and Siberia - a global treasure?

26 2012 June
104
In the epoch of the next attempts to redistribute resources in various territories of our planet, the situation with the "no man-made" Antarctica seems very interesting. Someone on this ice-covered mainland seduces untold riches in the form of clear water, someone wants to get to Antarctica to make it a huge military training base, someone has plans that the southernmost continent of the Earth due to its selective and temporary occupancy could be used as a landfill for storing accumulated nuclear waste and other debris left over from human activity. In general, plans, as they say, the hulk and attempts to implement these plans are becoming more and more revealing. As well as issues related to the opposite “end” of the planet, the Arctic, concern even those countries from which thousands and thousands of kilometers to the Arctic expanses, so today the Antarctic question causes quite substantial disputes between those who want to preserve the unique world of Antarctica and those who wish bend the world to your interests. 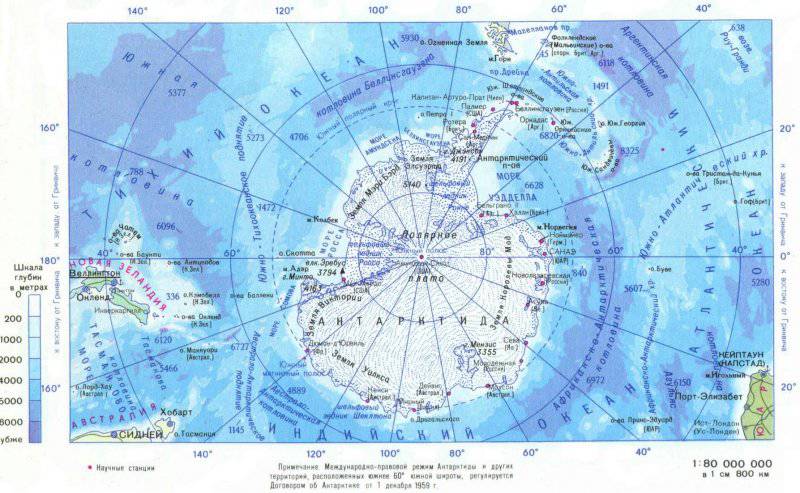 It would seem that the 1959 treaty concluded in the American capital that Antarctica should become a place where any representatives of humanity have equal access should cool the ardor of those who advocate the redistribution of the continent. Recently, however, this treaty is being subjected to a very original discussion, when the general and equal access is perceived by many countries in the following way: they came, fenced, did their job, and how far this matter corresponds to the ecological security of the continent, this is not all recalled.

Obviously, the continuing parity on the southern mainland is unlikely to be eternal. Sooner or later there comes a time when certain forces will try to do everything so that the resources of Antarctica serve them well. Today, Antarctica for many is a golden jug, which attracts to itself, preserving its secret wealth, but is behind seven seals. And you can say with a high degree of confidence that there will be hunters to thwart these forbidden seals. Whether the Washington Social Contract mentioned above will be an obstacle for them is certainly not. Yes, and this agreement itself can be used as desired by one or another state, because here the slogan “everything is collective and everything is mine” can be understood by all interested people too literally. Obviously, dealing with the breakdown of the press would have gone much faster if the Antarctic were not only prospected, but also mineral deposits are economically justified. Say such as hydrocarbons.

An eloquent example in this regard is the situation with Siberia. Hot heads in the West are already declaring that Siberia should become the same “common” territory as Antarctica. The argument is approximately the following: Russia once seized these lands from the indigenous population and therefore has no right to dispose of their richest resources, because it (Russia) cannot even settle Siberia properly. But, as is clear from these words, the European and North American states, it turns out, have every right to begin the development of Siberia. Where this right is negotiated - the tenth case. In the end, those same hotheads can, in a relaxed atmosphere, concoct a new treaty in which Siberia will be a “neutral” territory.

It seems that these are ordinary empty words, which have already been spoken enough to Russia by a number of Western politicians, but they cannot be ignored either. Any expressed idea can become material, and enough ways for its materialization can be found.

It is obvious that some foreign “partners” itch from the desire to attach them to the riches of Russian Siberia, which, in the understanding of these people, has suddenly become a “global treasure”. But then you need to follow this logic to the end and declare the territories for equal access, for example, the Persian and Mexican bays, Alaska or Greenland. However, for some reason, it is Russian Siberia that is associated by its status with Antarctica, but American Alaska is not. The approach to endowing territories with “common property” statuses is understandable, and why such provocative statements come into being is also clear.

By the way, it is worth recalling that the Washington Antarctic Convention is not indefinite. It was concluded on 100 years, which means that its term ends in 2048 year. It would seem that before the onset of this time is still very far away, but here it is necessary to keep in mind such an idea that any adopted convention can be unilaterally calmly revised and before the expiration of its validity period. And if we assume that at least one of the signatories of the Antarctic Treaty decides that only Antarctica should belong to it, then this can lead to a grandiose conflict. And here, no one will remember the environmental security on the mainland and the moral principles of partnership in general. Everyone will try to grab a chunk more impressively, so that later you can use it at your discretion. But a chunk of a neighbor may turn out to be more and “tastier,” and this is already a new reason to clarify the relationship.

In this regard, it is worth thinking about how to preserve the status of the Antarctic global wealth and beyond. Of course, no military intervention should be allowed. On the other hand, it would be possible to create a kind of Antarctic Council in the UN, which would receive real authority to control the claims of various states in Antarctica. But the trouble is that the United Nations has managed to seriously discredit itself, and therefore there is no trust in it in terms of regulating the development of the Antarctic either.

And while the situation looks calm enough, but this is only outward calm, which can lead to a real near-Antarctic storm.

Ctrl Enter
Noticed oshЫbku Highlight text and press. Ctrl + Enter
We are
Who is ready to "cut" Antarctica?Battle of Antarctica
104 comments
Information
Dear reader, to leave comments on the publication, you must to register.