Knights and chivalry of three centuries. Knights of Outremer

I am ready to die in battle
In the battle for the Lord Christ.
All those whose conscience is unclean,
Who hides in his land,
The gates of paradise are closed,
And God meets us in paradise.
Friedrich von Hausen. Translation by V. Mikushevich)

It does not matter how or why, but it turned out that in 1099, the Western European knights found themselves in the East (Lower Lands, Outremer, as they said), where they created their own states. There were many of them and they occupied a fairly vast territory in Syria and Palestine, in Cyprus (after its conquest by English Richard I) and in the Latin Empire with its capital in Constantinople after 1204, and also from its successors in Greece. Well started история Crusader states in Syria, Palestine and Lebanon with the arrival of the participants of the first crusade to the Middle East in 1098. It had an end, which was marked by the fall of Acre and coastal cities held by the crusaders in 1291, although the Templars owned the coastal island of Arwad before 1303 of the year. The Latin Empire existed from 1204 to 1261 a year, but the princedoms of the crusaders in southern Greece persisted until the 15th century. And the Kingdom of Cyprus was annexed by Venice only in 1489 year. 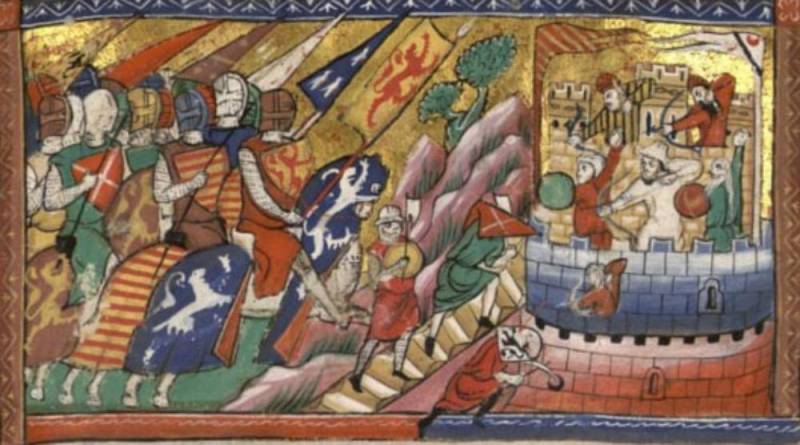 Crusaders at the walls of Antioch. The Story of Guelmo de Tire (William of Tire), Acre, 1275-1300 (National Library of France, Paris)

The small size, the hostile environment of non-Christians, the unfamiliar climate — all this made the states of the Crusaders sufficiently vulnerable, with the exception of the island of Cyprus. And it is clear that this vulnerability simply could not have an impact on their military affairs. Let's start with the fact that there was, for example, the problem of lack of horses. It was evident in the early years and remained a source of weakness in the Knighthood of the “Lower Land” and later. It would seem that Arabia was close by, all the Mamluks rode beautiful horses, which was not so difficult to get, but ... these horses were not suitable for heavily armed knightly cavalry, and the heavy large horses from Europe were not only very expensive their transportation by sea, still not withstand the local climate. There were not enough warriors either, although the Crusaders, quite possibly, strongly overestimated the number of their Islamic opponents. On the other hand, the problem of “personnel” became particularly acute after the creation of the Crusader states in Greece in 1204, when a large number of knights from Syria and Palestine went there. 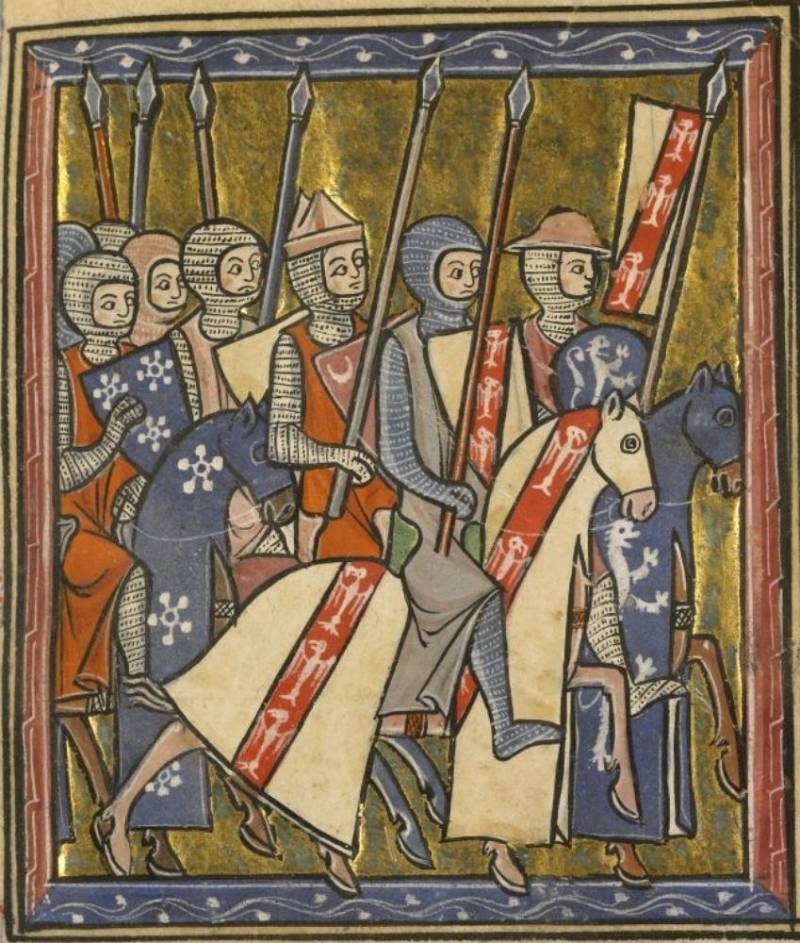 When to borrow is very helpful

The tactics of the Crusaders and their military organization were well studied, although more attention was traditionally paid to the first stage of the conquest than to the second, defensive. Here we must emphasize the vital role of military orders, such as the Templars and the Hospitallers, and the role of the urban military communities. Generally speaking, the Crusaders did little to teach the soldiers of the eastern Mediterranean, but they themselves adopted a lot of what they saw in Byzantium and their opponents Muslims. The Crusaders actively took over equipment from them, although this most likely was only the tradition of using captured trophies, and not by deliberately copying the military achievements of the enemy. The most notable examples of this phenomenon were light cavalry, using spears with reed or bamboo poles, infantry planted on horses (it was used for high-speed raids) and archers. The latter were necessary to fight the enemy cavalry, since it was she who was the main opponent of the crusading armies in the East. It was here that the knights finally realized that success on the battlefield can only be achieved by using their forces in a comprehensive manner. And if they lacked some warriors, then ... the latter could always be hired from local Christians and even Muslims of a different sense than this enemy! 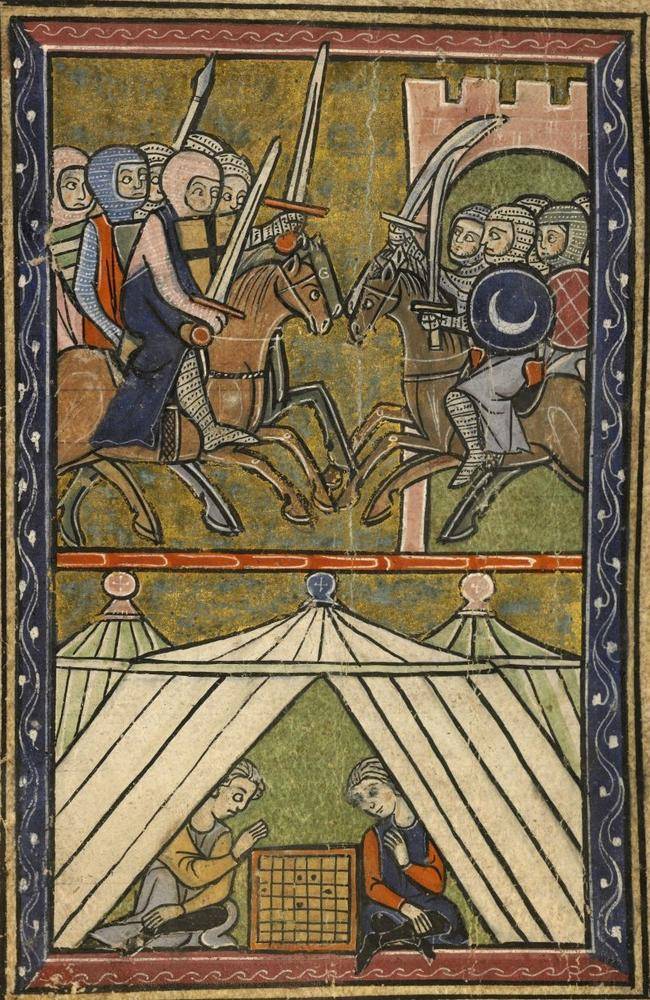 The knights of Outremer fight Muslims and ... play chess with them. History of Outremer, Jerusalem, 1287 (Municipal Library of Boulogne-sur-Mer, France)

The main thing is the layering

Here it is time to consider, and how the knights dressed for battle, who fought in Syria and Palestine, dressed in general. Well, first of all, as it should be, and how it was done at this time everywhere, the knights put on linen - wide, bra-like lower pants that reached to the knees and tied at the waist and legs. Wearing a brae, the knight wrapped his feet in the Shossi - an extremely curious type of medieval clothing, which was a separate leg, cut and sewn in such a way that they were as if stockings were tightly wrapped in each leg. They were also tied to the brae belt. Chainmail mails on a lining of thin leather were worn over the fabric chassis and, again, were tied to a belt. The chainmail footprint replaced the shoes, although it also happened that the sole of the chainmail was leather. Sometimes, on top of the chainmail shawls, some mods also tightened colored fabric chauses. Under them the chain mail was not visible, but nevertheless she was there. It became customary to protect knees with forged cup-shaped kneecaps attached to quilted “tubes” of linen. Sometimes they were short. Sometimes they protected the whole thigh to the very top, similar to the armor of the Italian knight Colaccio Beccadelli. 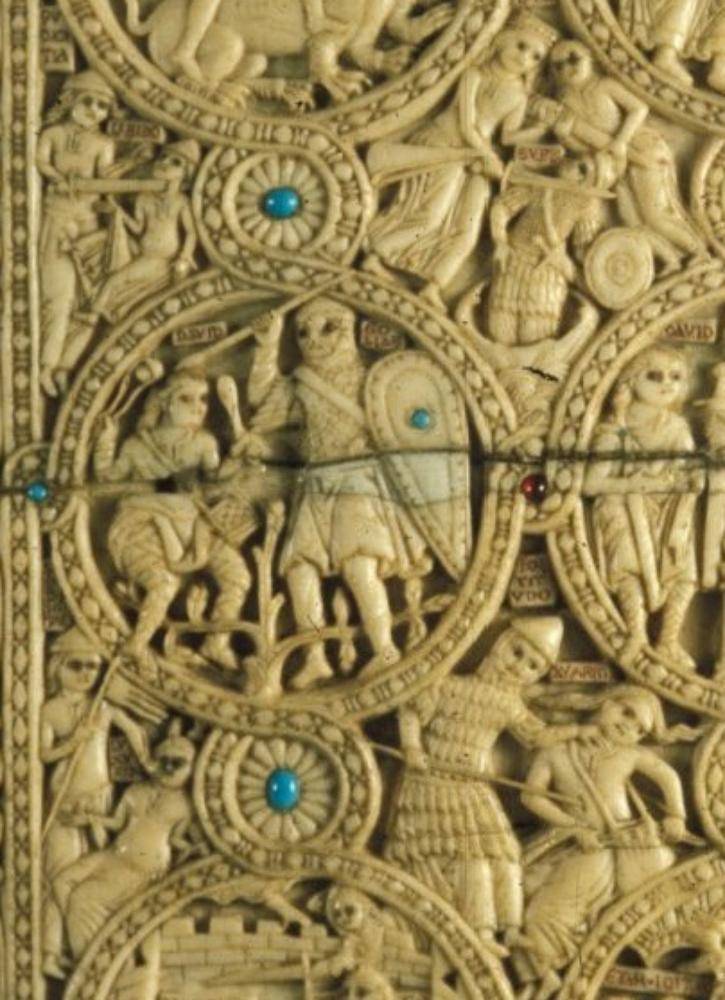 The shirt, also linen or even silk, with ties on the sleeves and neck was loose-cut. A quilted kaftan gambizon was worn over the shirt under a chain coat. The hair on the head was removed under the same quilted cap, protecting the head from contact with the rings of the chainmail hood. The mail was worn on the gambizon, the mail hood - aventyle over the mail. Sometimes he had a face flap that covered the lower part of his face, with leather lining and with ties, or with a crochet hook, with which he clung avantyle. Thanks to all this, the valve could be thrown back and freely spoken. To fix the topfhelm cylindrical helmet, a leather cushion filled with wool wool was put on his head. The helmet had a suede trim inside and a “petal stop” inside for the crown. All this made it possible to firmly fix the helmet on the head, which was important because of its narrow viewing slots. Helmets were often painted to protect against rust. 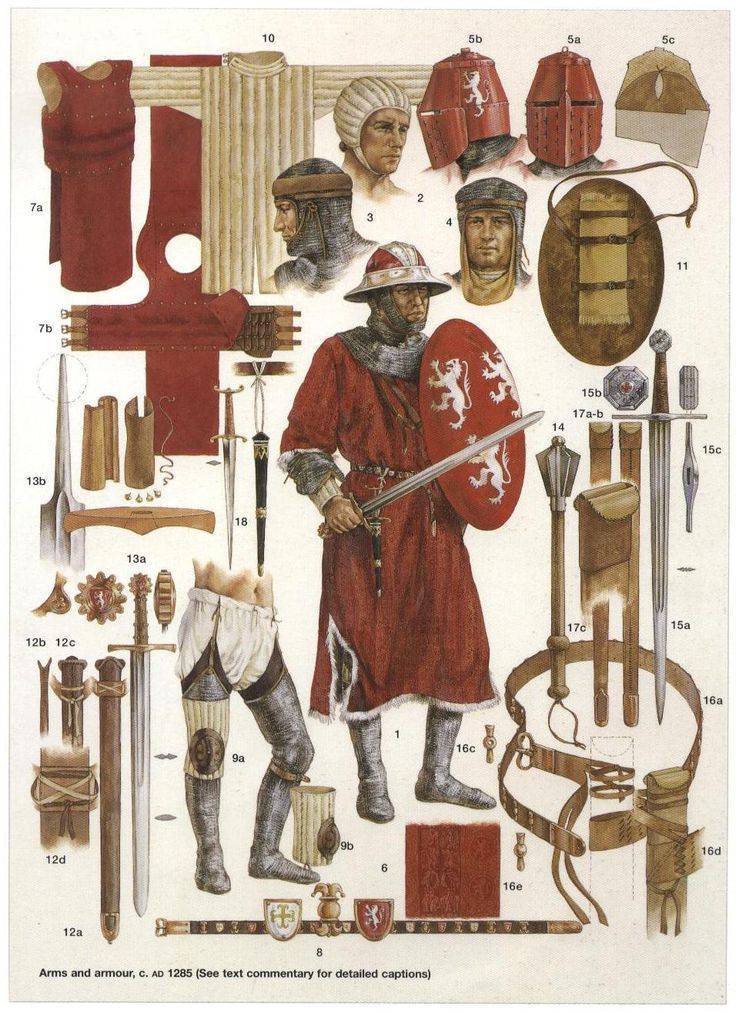 Since it was very hot in Syria and Palestine, the cappel-de-fer helmets, that is, the iron hat, became fashionable. Moreover, they were worn not only by ordinary infantrymen, but also by noble knights. A coat of coat of arms or a white canvas, as well as a helmet sack (a kind of "tire" for a helmet made of cloth), also spread here to prevent the armor from heating up in the sun. Brynandin - metal plate armor, which was worn over the chain mail, was also sheathed from the outside, often quite expensive, for example, with velvet, since in this case it replaced surcoat. It is known that such armor as a joserant or hauberk of two layers of chain mail of different weaving with a layer of fabric was also widely spread. Warriors of the West began to use the purely oriental developments of this time - lamellar, lamellar, armors, which were borrowed from Byzantines and Muslims, as well as metal scales. 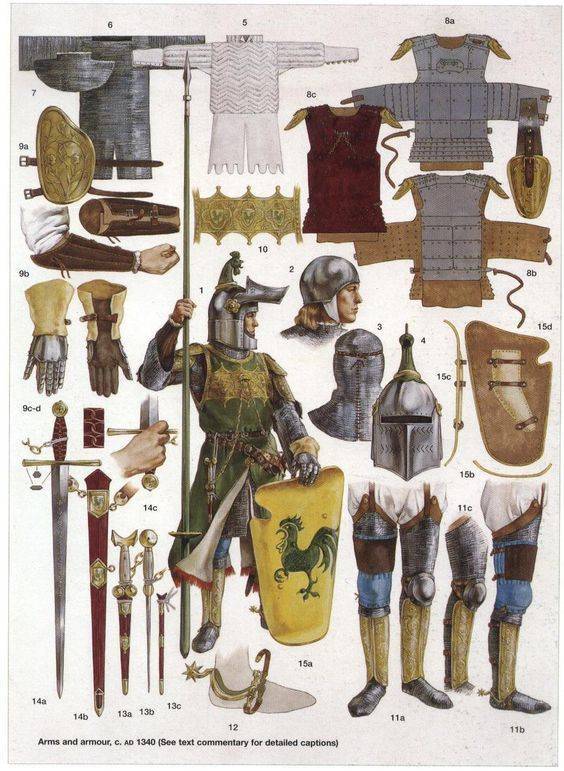 As you can see, the equipment has become much more diverse and rich. The Surcoat is decorated with embroidery, chainmail Shoss is covered with plates of embossed leather, leather shoulder pads and plate gloves appear. Compulsory weapons it also becomes a dagger, and gold (or at least gold-plated) chains going to the handles of the dagger, sword, and to the helmet is an indicator of wealth. In fashion come cap helmets - servilera, and the "big helmet" gets rising up the visor. Swords blades and shields, which are now often made concave and provided with a recess for the spear shaft, become a different form.

The weapons of the knights of the Outremer were diverse, and in addition to the knight's spear included a sword, an ax, and a mace or shester. Handles of swords, as well as the sheath, at this time begin to decorate. The knights in this case clearly copied the fashion of the East, where the custom of decorating weapons by this time has long become a tradition. The guides of all these innovations, according to D.Nikol, were Armenians. Their role as random allies and the source of mercenaries for the Crusader states in Syria is obvious and far more important than the role of any other Eastern Christian population. 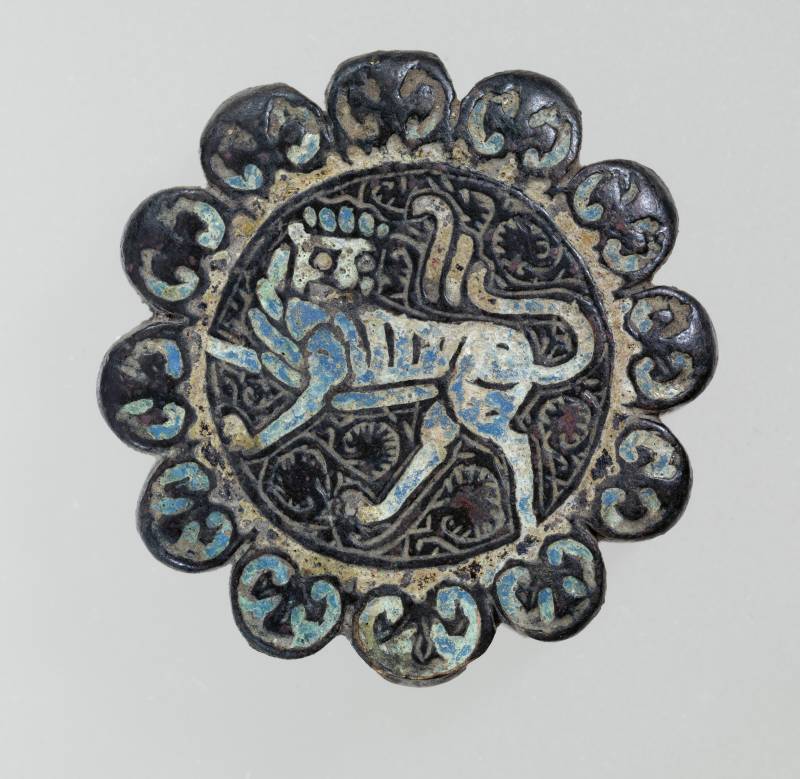 Top of the sword (obverse) of the era of the Crusades, found in the Middle East. The unidentified heraldic shield on the back of the disk was probably a sign of its original owner or noble family to which it belonged. The lion on the obverse is clearly made later. (Metropolitan Museum, New York) 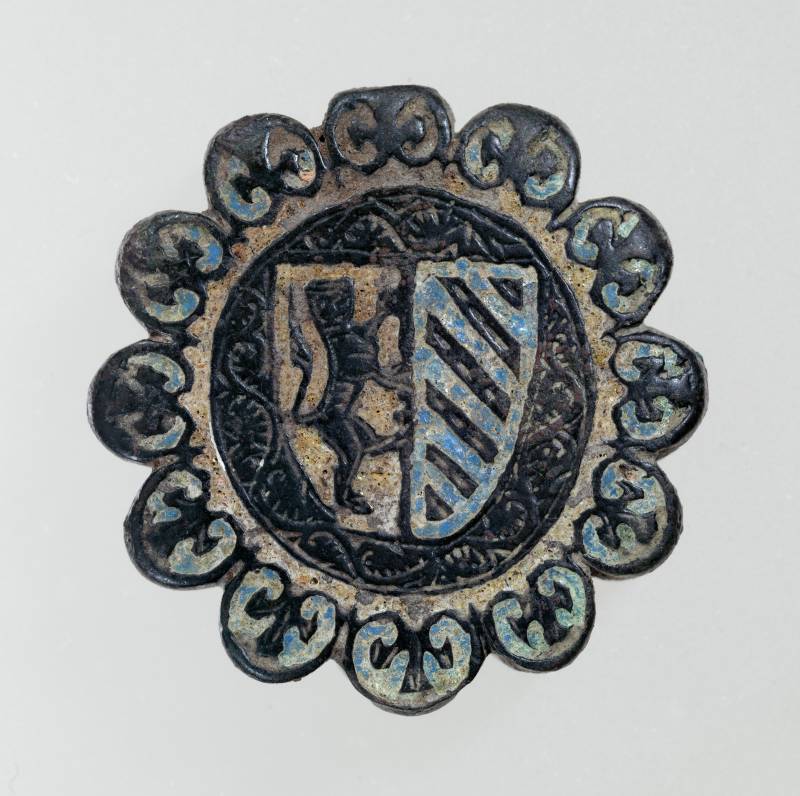 Top of the sword (reverse) 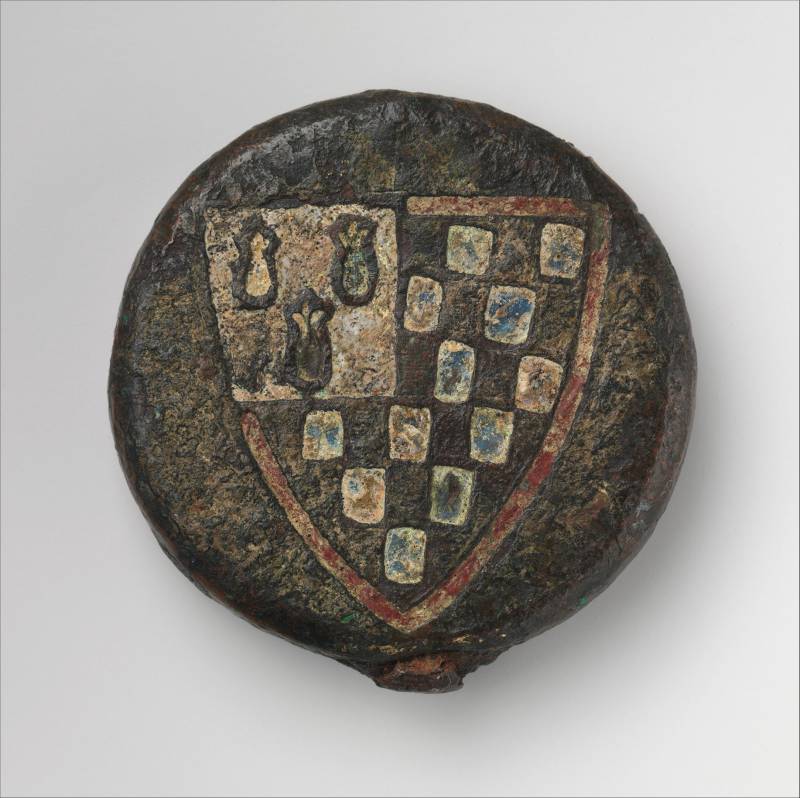 The heads of the sword Pierre Moklerka de Dreux (1190 – 1250), Duke of Breton and Count of Richmond. OK. 1240-1250 Material: copper, gold, enamel, iron. Diameter 6,1 cm, thickness 1,2 cm), weight 226.8 g. Obverse. (Metropolitan Museum, New York) It is interesting that in his coat of arms in the upper left corner we first depicted ermine fur and the same fur is shown on the shield of his effigy. But having been in a crusade and, apparently, having suffered there from thirst, he ordered to put in the coat of arms on the top of the sword an image of waterskins with water, symbolizing participation in the crusade.

Turkopuly - Muslim mercenaries in the service of the Knights of Christ

But perhaps the most interesting people in the Outremer, who were arriving from Europe, were surprised by the Crusaders most of all, were Turkopules - Muslim troops with their national weapons in the service of Christians. They were not homogeneous in their ethnic and religious composition, and besides included both cavalry and infantry, archers and spearmen, although most of them were apparently light-riders using the bows in the Byzantine style or the Mamluk style of Egypt . That is, in the first case, they shot through the heads of their troops, being in the second line of knightly cavalry, and in the second - attacked the enemy as skirmishers, trying with a false retreat to bring him under the blow of his heavy cavalry. It is worth noting that Turkopolis appeared under the Crusaders in Cyprus, the Balkans or in Greece, and perhaps even in Normandy after the return of King Crusader Richard I from Palestine.