26 2012 June
5
In the UK, comparative tests of light machine guns were conducted in the 1932 year. The main objective of the test was the choice of a system for rearming the army of Great Britain The best results were shown by the Czech 7,92-millimeter Vz.26 “Zbroevka Brno” (ZB-26) having a box magazine. After some modernization, which was carried out by Czech designers Emanuel and Vaclav Holekami and Anton Marek (ZGB33 chambered for “British service” .303 - this ammunition had a protruding lip, so it was necessary to noticeably change the power system) and those. Finishing machine gun in 37-th year began to produce in the English city of Enfield. The name of the machine gun was the first two letters of the names of the cities of Brno and Enfield. By June 1940 put more than 30 thousand machine guns into the troops. Machine guns of this system were made exclusively in Enfield Lock (Midlassex). 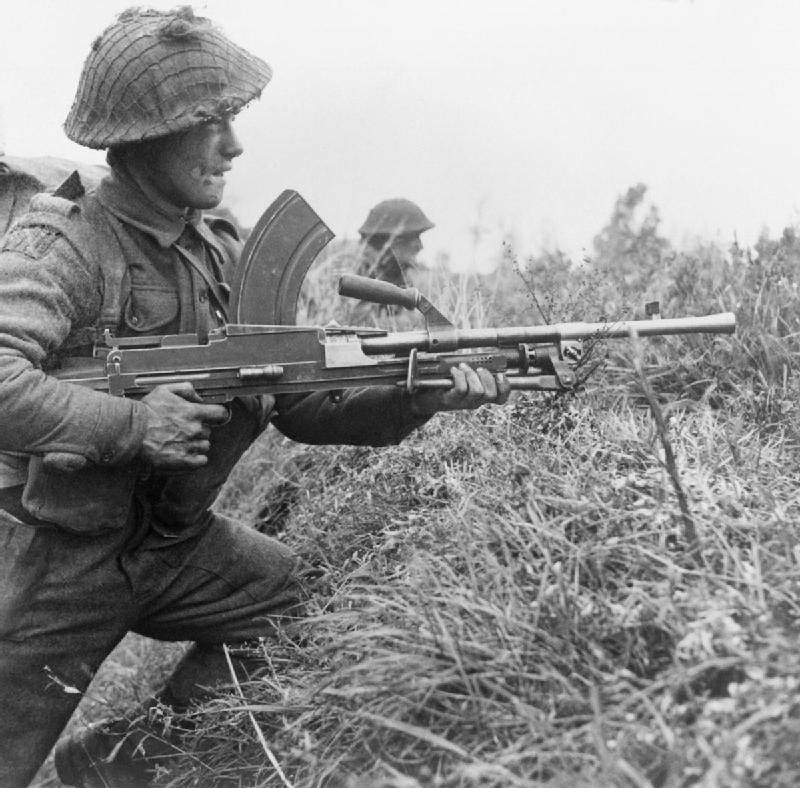 The first sample was given the designation Mk 1. The 2 MK had the same barrel length, a simplified sight, as well as a single “sight-gas regulator-front” assembly, which was subsequently made of three separate parts (the post-war Mk 2 / 1 machine gun had a simplified cocking handle). Under the butt of the machine gun was not an additional handle. These changes, the main goal of which was to simplify production, caused a weight increase from 10,04 kilogram to 10,52. Mk 3 had a shortened trunk, and the mass decreased to 8,76 kilogram. The 4 Mk machine gun barrel was even smaller, and its mass was reduced to the minimum allowed when firing with relatively powerful .303 cartridges. The machine gun "Bran" .303 caliber was in service with the Belgian army and in the countries of the British Commonwealth. It should be noted that these machine guns are still in service with the armies of underdeveloped states and emerge during numerous local conflicts.

After they decided to adopt a single NATO 1956 millimeter cartridge for supplying the British army in 7,62, it was necessary to carry out machine guns for this munition, and from 59 onwards began to produce the XBUM machine gun Bren L7,62. From the point of view of economy, it was advisable to remake a large number of machine guns with a good reputation for this cartridge. This program was soon launched in Enfield at the Royal Small Arms factory. Alteration was not easy, however, it was facilitated by the fact that a large number of X-BUM “Bren” X-mm machine guns were released to World War II in Canada for export to China under the “Mauser” cartridge, which does not have a prominent liner edge. It turned out that the power system and shutter weapons “Chinese contract” is great for a new 7,62-mm cartridge - and it is used. 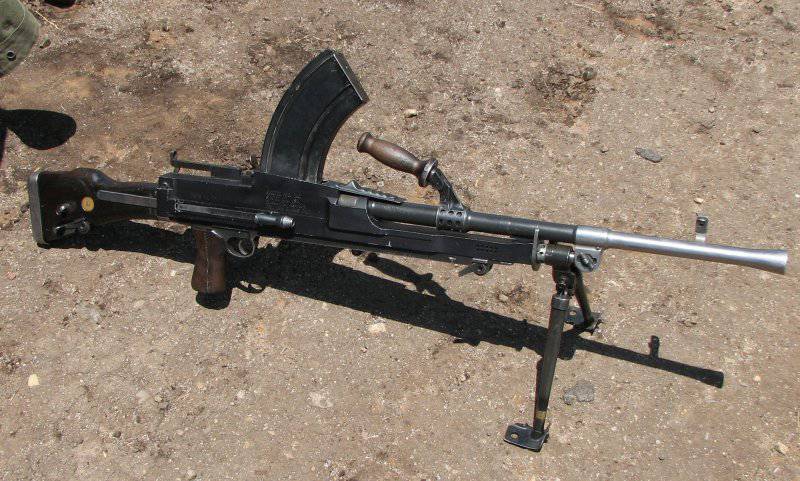 The basis of the automatics of the "Bran" machine gun is the removal of a part of the powder gases from the barrel. This principle is combined with a short barrel stroke to partially compensate for recoil. During the shot, the barrel, gas chamber and bolt slide back along the guide of the receiver back by approximately 6 millimeters. Movement is extinguished by means of a piston damper with a spring. After energy absorption, the spring of the shock absorber expands, returning the retractable mechanisms and parts to the forward position. Part of the powder gases, after passing through the hole made in the wall of the barrel and the gas regulator, begins to put pressure on the gas piston, throwing it into the rear position.

By skewing the shutter, the barrel bore is locked. The frame of the gas piston rod enters the bolt carrier and two inclined planes press up the back part of the bolt, locking the bolt on the lugs in the upper part of the receiver. When reversing, the shank of the piston rod passes around 32 millimeters. During movement the shutter remains locked. During further movement, the inclined surface on the stem of the stem lowers the back of the bolt and unlocks the barrel bore. The sleeve is removed from the chamber, after which the fixed reflector passes into the gate groove, pushing the sleeve through a cutout made in the shank of the gas piston rod.

Return-combat spring when the gas piston retracts is compressed, the energy accumulated by it, and the shock absorber send the piston forward. The shock absorber spring is relatively “soft”, and therefore the forward movement speed of the gas piston is small. This allows you to maintain the rate of fire at 500 shots per minute. The tabs of the feeder in the front upper part of the bolt push the cartridges out of the magazine, which is mounted on top of the receiver vertically, and guide it down. After the cartridge is completely sent to the chamber, the movement of the shutter stops. The forward movement of the gas piston takes place due to the residual energy of the return and combat spring, the rear part of the shutter is raised by two inclined planes, the shutter is locked. During the shot, the inclined planes remain under the bolt, keeping it locked. The gas piston moves another xNUMX millimeter. The bolt of the bolt strikes the drummer.

A flag-translator-fuse is mounted above the trigger guard on the left side. The front position of the flag corresponds to "continuous fire", the rear - "single fire", the middle - "fuse". The fuse disconnects the trigger and the sear using an uncoupler, the protrusion of which holds the gas piston rod out of the cutout. It is believed that this solution is not very successful, since when hit or dropped, there is a high probability that the gas piston will come out of engagement, and it is he who acts on the drummer. In the middle of the sear there is a window through which the disconnector lever passes. If the translator is in the position of a single lamp, the disconnector is on the path of movement of the gas piston that presses it while moving forward. The disconnector is lowered into the whisper's window, while it is released to lift and hold in the cocked position of the piston. When the trigger is pressed, the disconnector descends. If the translator is set to the continuous fire position, the uncoupler goes down through the whisper's window, while the upper part of the uncoupler does not prevent the movement of the gas piston. The fire continues until the moment the cartridges are used up or the trigger is released. 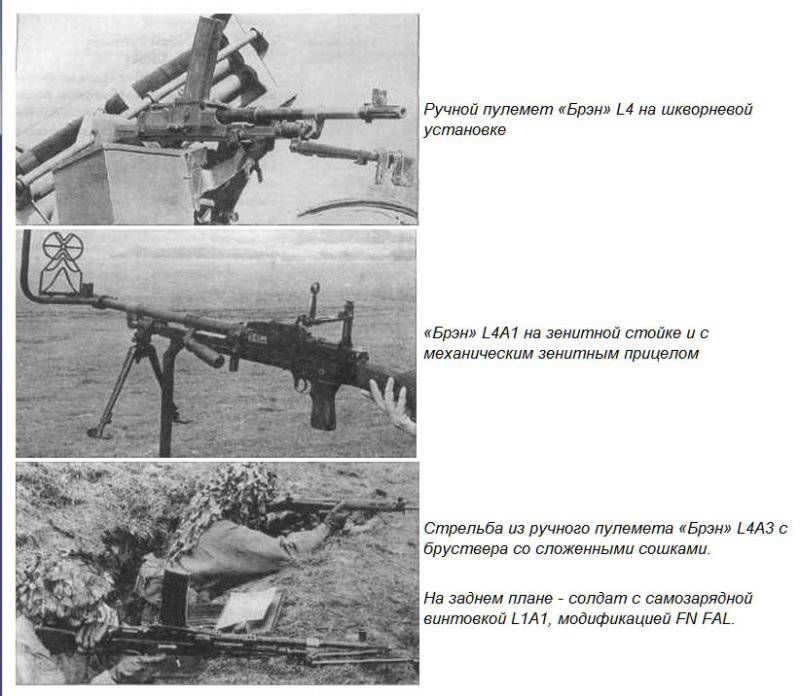 The barrel channel of the new "Bran" was chromed. This made it possible to reduce barrel wear, to abandon its frequent replacement, as well as to release machine guns with a permanent barrel. The gas regulator can have four positions that open holes of different diameters. Giving momentum to the gas piston, gases escape through the holes made in the walls of the gas chamber. A low rate of fire, as well as a slight return are decisive for the convenience of controlling the machine gun.

It takes a few seconds to replace the barrel. To do this, it is necessary to raise the stem lock, pull the barrel forward by the carrying handle. At a rate of fire equal to 120 shots per minute, the barrel must be changed every 2,5 minutes.

Unlike the “Bran” machine gun from the Second World War, the L4A4 machine gun was not installed on a tripod machine, and it can be mounted on the upper hatches of self-propelled artillery mounts, as well as other armored vehicles. Anti-aircraft machine gun version is supplied with a foreshortening sight.

Although the L4A2 and L4A4 are officially withdrawn from the army’s weapons, they will still continue their active service as an auxiliary weapon of the near ground and anti-aircraft defense in the British Air Force, in the engineering troops, in territorial defense and in the Royal Artillery. In addition, the "Bran" is in service in some countries of the British Commonwealth.

The order of unloading machine gun L4A4 "Bran":
1. Turn on the fuse.
2. Press the latch of the store which is located behind its socket and disconnect it.
3. Turn off the fuse and pull the cocking handle back.
4. Inspect the guide slot and chamber through the window of the store's nest.
5. Pull the trigger while holding the cocking handle.
6. Return the cocking handle to the forward position.
7. Sliding back the cover of the shop window to close it. Close the receiver box window located at the bottom of the machine gun, designed to eject spent cartridges. To do this, slide the cover back.