Pipe for a rocket. The project of the landing complex D. B. Driskill (United States)

12 May 2019
21
In the forties of the last century, military and scientists from leading countries evaluated the full potential of rocket technology, and also understood their prospects. Further development of the missiles was associated with the use of new ideas and technologies, as well as with the solution of a number of topical issues. In particular, there was the question of the return of rockets and other promising equipment to the earth with a safe landing and the preservation of the payload in integrity and safety. An extremely interesting, though unpromising version of the landing complex in 1950, was proposed by the American inventor Dallas B. Driskill.


At the turn of the forties and fifties, topical issues of the return of rockets to the earth were solved quite simply. Military missiles simply fell on the target and were destroyed with it, and the carriers of scientific equipment safely descended on parachutes. However, parachute landing imposed restrictions on the size and weight of the aircraft, and it was obvious that in the future will need other tools. In this connection, various variants of specialized ground complexes were offered with enviable regularity. 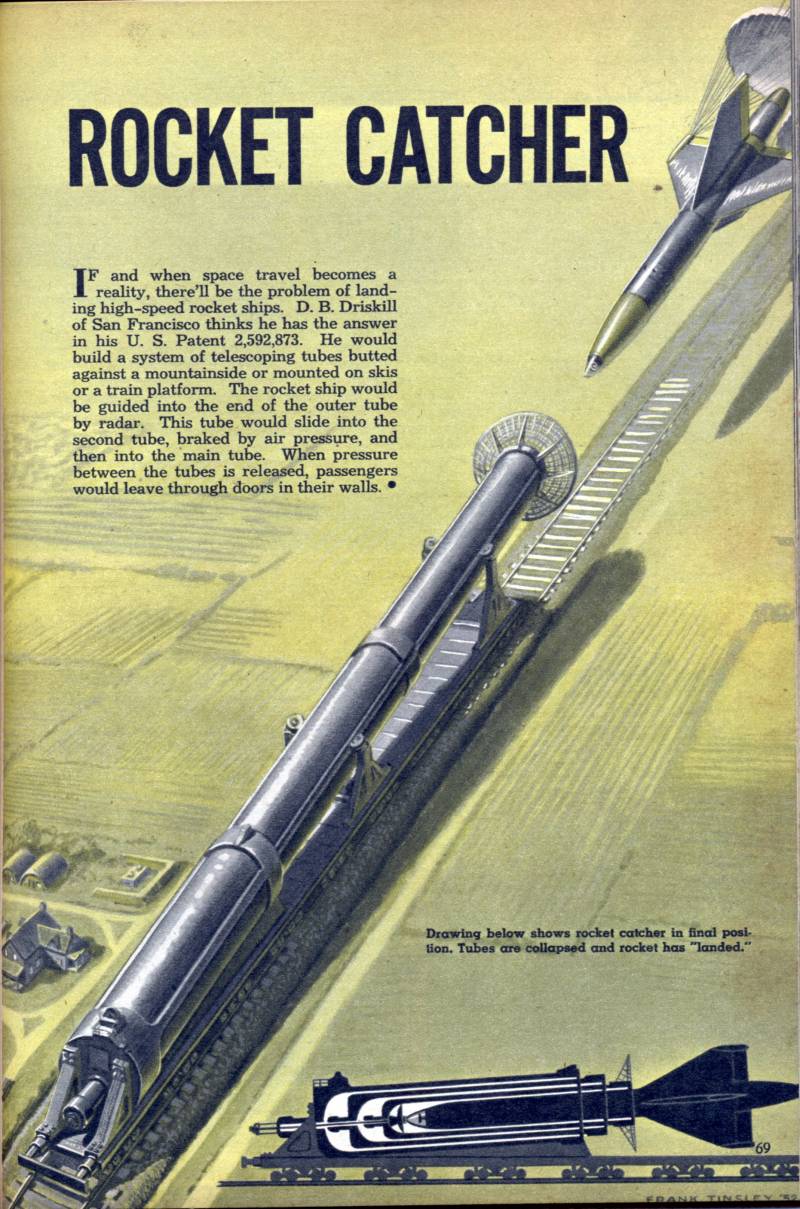 The Driskill system in the pages of the magazine Mechanix Illustrated

Landing complex of a new type

By the beginning of 1950, the American inventor Dallas B. Driskill offered his version of the landing system. Previously, he offered different designs in various areas of technology, and now decided to take up missile systems. In mid-January 1950-th inventor filed an application for a patent. In April, 1952, the priority of D. B. Driskilla was confirmed by the US patent US138857A. The subject of the document was designated as “Apparatus for landing rockets and rocket ships” - “Apparatus for landing missiles and rocket ships”.

The landing complex of a new type was intended for the safe landing of missiles or similar aircraft with passengers or cargo. The project provided for a horizontal landing with smooth damping of speed and elimination of excessive overloads. Also, the inventor has not forgotten about the means of passenger service.

The main element of the landing complex was proposed to make a telescopic system of three tubular parts of large size, corresponding to the dimensions of the aircraft to be landed. It was the telescopic device that was responsible for receiving the rocket and its braking without significant overloads. Various options for its use were envisaged, but the design did not undergo major changes.

Design and principle of operation

According to the patent, the functions of the landing gear body were to be performed by a large-diameter pipe-glass plugged from the end, capable of accommodating other parts. Inside it, near the end-cap, it was possible to install a brake for the final stop of the rolling contents. A manhole was provided at the end for access to the inner space, as well as for disembarking rocket passengers.

Inside the largest glass, it was proposed to place a second unit of similar construction, but of smaller diameter. Sliding rings were provided on the outer surface of the second cup to interact with the inside of the larger part. Inside the second cup there was a brake, and at the end there was provided its own hatch. The third pipe-glass was supposed to repeat the design of the second, but differ in smaller sizes. In addition, expansion was envisaged at its free end. The inner diameter of the smallest glass was determined by the transverse dimension of the cylindrical body of the missile being received.

It was proposed to install radio equipment on the telescopic system for launching the rocket onto the landing path and holding it. Appropriate devices had to be present on the vehicle being landed. The landing complex could be equipped with a cabin for operators. Depending on the method of installation and execution, it could be installed on a large glass, next to it, or at a safe distance.

The principle of the landing complex D. B. Driskilla was unusual, but simple enough. With the help of a special avionics, a rocket or spaceplane was supposed to reach the landing glide path and “look” at the open end of the third, least large glass. The telescopic system at the same time was in the extended position and had the greatest length. Immediately before contact with ground-based devices, the rocket had to use brake parachutes or landing engines, which reduced its horizontal velocity.

The exact calculation was to bring the spaceplane exactly into the open part of the inner cup. Having received the impulse from the rocket, the glass could move inside the larger part. Pipe friction and air compression partially dissipated the energy of moving parts and slowed the movement of the rocket. Then the middle glass had to move from its place and enter a large one, also redistributing energy. The remains of the impulse could be extinguished or dissipated in different ways - depending on the mounting method of the tubular device. 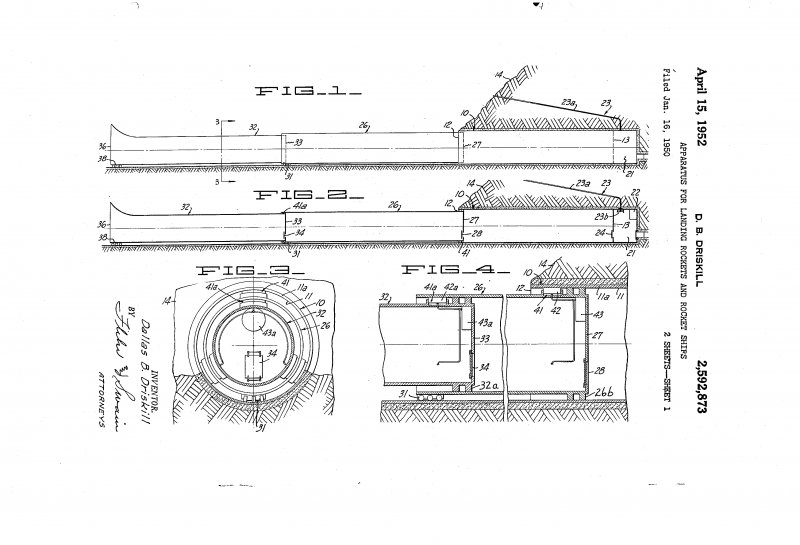 The design of the complex and its placement in the hillside. Drawings from the patent

After landing and stopping the moving parts, the passengers could leave the rocket, and then leave the landing complex through the doors at the ends of the glasses. Probably, then they could get into a kind of airport arrival hall.

Variants of the architecture of the landing complex

The patent proposed several options for the architecture of a landing complex based on a telescopic system. In the first case, the glasses were proposed to be placed directly on the ground at the foot of a suitable hill. At the same time a large glass was placed in a fortified artificial cave. In the same place there were office and household rooms. Such a variant of the architecture meant that the excess impulse not absorbed by the telescopic structure and internal brakes would be transferred to the ground.

The telescopic device could be equipped with floats and placed on a canal with water of sufficient length. In this case, the rest of the energy was spent on moving the entire structure through the water: the whole complex could slow down and lose energy. Similar options with wheel and ski chassis were also offered. In these cases, the complex had to move along the track with a springboard at the end. The hill was responsible for creating additional resistance to movement and also extinguished energy.

Later in the American press appeared a drawing depicting another option for mounting a telescopic complex. This time it was fixed at a small inclination on a long multi-cart railway transport platform. A large glass was “attached” to the platform rigidly, while the other two were supported by supports with rollers. An additional depreciation system has appeared inside the movable cup system, located on the longitudinal axis of the entire assembly.

The principle of operation remained the same, but the inclined placement of the telescopic system should have changed the distribution of forces on the structure and the ground. As in previous versions of the project, the rocket had to fly into the inner tube-glass, fold the system and slow down, and the conveyor platform was responsible for the mileage and final stop.

The patent for the "Apparatus for landing rockets" was issued in the early fifties. In the same period, non-fiction and entertaining publications were repeatedly written about the interesting invention of Dallas B. Driskill. The original idea was widely known and became the topic of discussion, primarily among the interested public. As for scientists and engineers, they did not show much interest in the invention.

The further development of rocket and space technology, as it turned out, went well and continued without complicated telescopic landing complexes. Over time, the leading countries developed a whole range of returned spacecraft for people and cargo, and none of these samples needed a complex landing system designed by D. B. Driskill. With current knowledge, it is easy to understand why the invention of the American enthusiast was never implemented in practice. 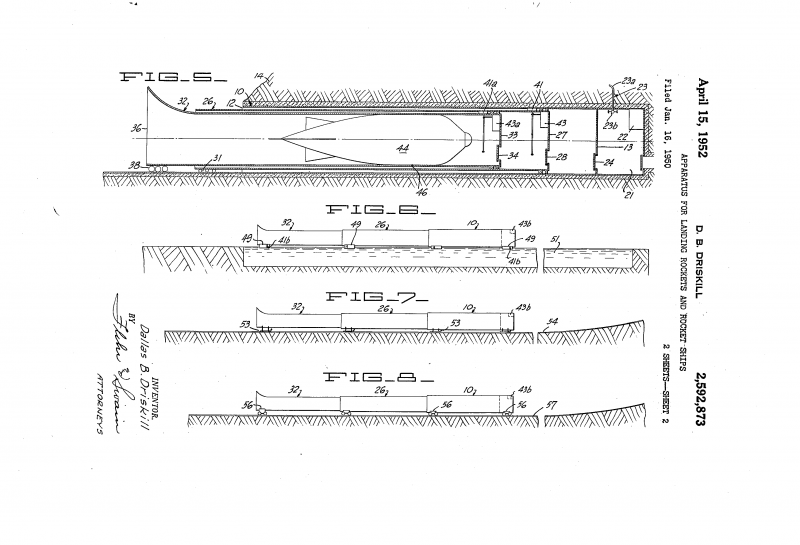 Other accommodation options for the complex. Drawings from the patent

First of all it is necessary to remember that the need for a special landing complex for a rocket did not arise. The return vehicles of space rockets cost parachute systems, and later reusable orbital airplanes could land on ordinary runways.

Invention D.B. Driskill was distinguished by the complexity of the design, which can impede both the development and construction, and the operation of operational complexes. To implement the original ideas required a complex selection of materials with the necessary parameters, after which it was necessary to develop a moving structure of sufficient rigidity and strength. In addition, it was necessary to calculate the interaction of parts, create the necessary brakes, etc. For all this, the complex was compatible only with rockets of given dimensions and with given speed parameters.

For the construction of the complex, a large site was needed on which it was necessary to place not the simplest objects. The proposed accommodation options for the complex involved complex earthworks or hydraulic works.

A typical problem was to be encountered during the operation of the landing complex. The rocket was supposed to reach the end of the telescopic system with the greatest possible accuracy. Even small deviations from the estimated trajectory or speed threatened accidents, including the crash with casualties.

Finally, a specific diameter telescopic system for a specific energy could only be compatible with certain types of missiles. When creating new rockets or spaceplanes, designers would have to take into account the limitations of the landing complex - overall and energy. Or to develop not only a rocket, but also landing systems for it. Against the background of the expected progress and its desired pace, both of these options looked hopeless.

Invention D.B. Driskill had a lot of problems and shortcomings, but could not boast of positive features. In fact, it was about the original solution of a specific problem, and this task and its solution had dubious prospects. As it became clear later, the development of astronautics and rocket technology continued perfectly well without means of horizontal landing of rockets. In this regard, the curious development of the enthusiast remained in the form of a patent and several publications in the press.

We are in Yandex Zen
Underwater launch systems: how to get out of the water into orbit or into space?
Space in open access
21 comment
Information
Dear reader, to leave comments on the publication, you must to register.