Army gun in the USA. Part of 1

April 10 2019
61
For more than half a century, the main gun of the US Armed Forces has been the classic model - Colt M1911A1, caliber 11,43 mm (cartridge .45 ACP) designed by John Moses Browning. This gun was in the United States so widespread that it can be considered one of the symbols of America. Pistol Colt M1911 survived two world wars, the war in Korea and Vietnam and many other local conflicts.


One of the advantages of the Colt M1911 pistol is the high stopping power of the .45 ACP cartridge. Even in our time, despite the huge number of more modern models, pistols such as Colt M1911, produced by various manufacturers, are in great demand and are used for self-defense and practical shooting. 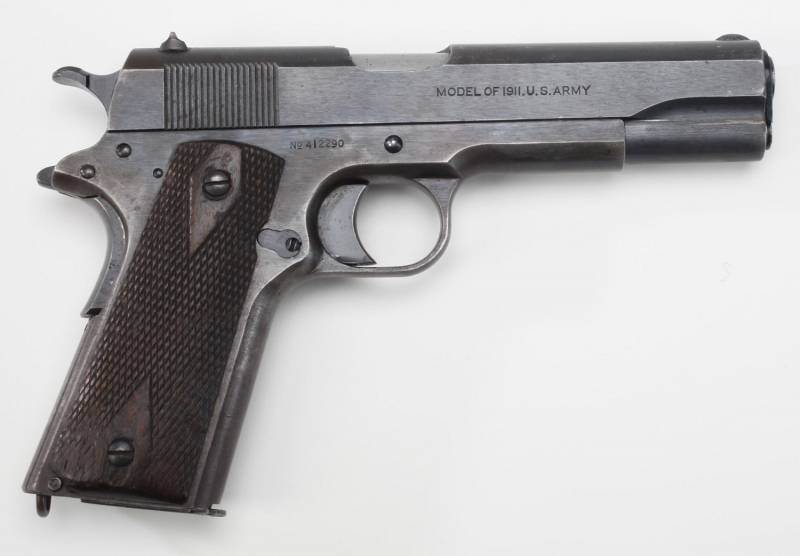 However, in the second half of the 1911th century, the Colt M1978 ceased to meet modern requirements. It uses a single action mechanism that does not allow self-cocking firing and a small number of cartridges in a single-row magazine. In this regard, the US armed forces in 1911 began work on the selection of a new pistol to replace the Colt M15 pistol and the Smith & Wesson M.XNUMX revolver.

Another reason for replacing the Colt M1911 pistols was the standardization of the 9x19 cartridge as a single NATO-unit pistol cartridge (M882 cartridge).

Just as in Russia many oppose the replacement of a Makarov pistol in the army, considering that its characteristics fully satisfy the Armed Forces of the Russian Federation, so in the United States there were a huge number of opponents of the new army pistol. Rejection caused and an invitation to participate in the competition of foreign manufacturers weapons.

Nevertheless, both American and European companies were invited to the competition, which took place in 1978-1980. From 25 samples of pistols from different companies were selected - Smith & Wesson (USA) with pistols model 459 and 459A, Cold Industries with SSP pistol, Beretta USA Corp. with an M-92 pistol, Fabrigue Nationale with FN HP and BDA 9 pistols and Heckler und Koch (HK) with P9S, VP70 pistols and PSP automatic pistol.

In case of victory of European manufacturers, they had to organize production in the United States. 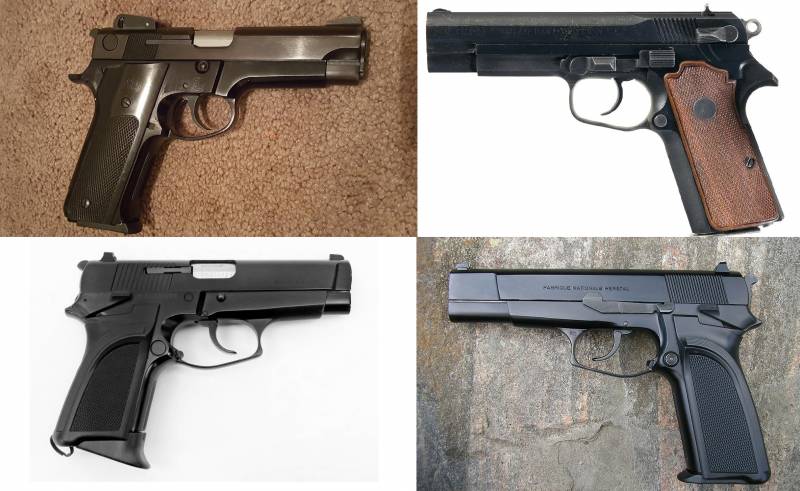 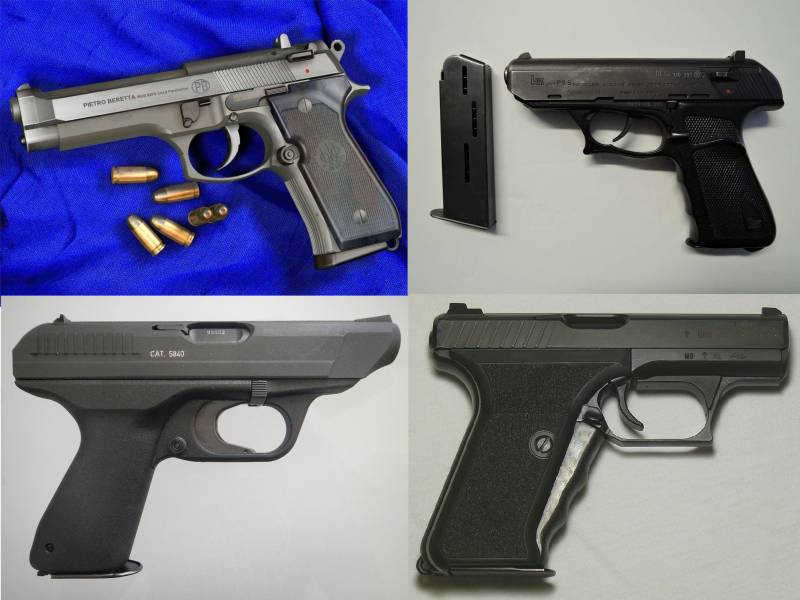 Pistols provided for the competition of the US Army Pistol by Heckler und Koch had a rather original design.

The NK P9S pistol used semi-free shutter and braking automatics using a pair of rollers like the G3 rifle. The HK VP 7 pistol was built on the plastic frame, advanced for its time, according to the automatics scheme with a free gate, rarely used in pistols for a powerful cartridge. Udarnikovy USM cocked by pressing the trigger before each shot, which increases the effort and reduces the accuracy of shooting.

And in the gun HK PSP (P7) used automation with a semi-free gate and the braking powder gases, discharged from the barrel. Udarnikovy USM pistol PSP is equipped with a cocking lever located in front of the handle of the weapon. With the girth of the handle lever moves back, cocking the spring of the drummer, when you release the lever, the drummer is removed from the cocking.


The scheme of the gun HK PSP

In general, one can note the desire of Heckler und Koch for non-standard solutions. The pistols Smith & Wesson, Cold Industries, Fabrigue Nationale and Beretta had a classic design, however, according to the test results, none of the pistols showed the necessary characteristics, primarily in terms of reliability in difficult conditions.

Based on this, in 1981, a new competition was announced, for which pistols were allowed, which showed the best result in previous tests. All applicants for the role of the US Army pistol had to use the cartridge 9х19, self-cocking trigger and stores of increased capacity.

The second competition considered pistols Smith & Wesson model 459, Beretta M-92SB, Browning BDA-9P, Heckler und Koch P7A13 (modernized PSP / P7) and SIG-Sauer P 226. The final was again the Beretta M-92SB pistol, but in the end neither he nor the other contenders again completely satisfied the military.

In addition, the US Congress put pressure on the military because of the considerable financial resources required for rearmament. The manufacturer of the original "Colts" - the company Coolt Mfg Inc offered a cheap alternative, consisting in the repair and modernization of all 418 000 pistol M1911А1 pistols in the 9XXNNXX caliber. In fact, most of the pistol was changing - trunk, bolt, magazine, ejector, reflector, shutter stop. However, the audit showed that over 19% of Colt pistols M40А1911 are in such a worn condition that their modernization is impractical, and therefore the decision to switch to a new pistol was finally made.

The third stage of competitive tests was promptly conducted by the US Army from April to September 1984. Two guns withstood the tests - the upgraded Beretta M-92F and SIG-Sauer P 226. Ultimately, according to official data, the lower cost of the Béretta M-92F pistol inclined the choice of the military in favor of this pistol, and in January 1985 was officially announced the adoption of the Béretta M-92F pistol as a standard personal weapon for all branches of the US military under index M.9. At the first stage, an order for 377 965 pistols was formed.

However, in 1987, the contract with Beretta USA Corp. was suspended after several accidents when several shooters were injured as a result of the destruction of the bolt. By this time, the order of 140 000 pistols had already been released. Beretta USA Corp. explained the breakage of valves with the simplification of manufacturing technology for mass production, and recommended changing the valve after 3000 shots, which of course did not suit the US Army.

The Beretta pistol incidents gave Smith & Wesson a reason to request an additional tender. Re-tests were carried out in August 1988. Smith & Wesson participated with an upgraded M.459 pistol, SIG-Sauer with a P 226 pistol with improved bolt guides, and Beretta USA Corp. introduced the M92FS pistol with a modified bolt. The new player was Sturm Ruger & Co with the P-85 pistol.

According to the test results, all competing samples were again rejected, and with Beretta USA Corp. A new contract was concluded for the supply of 500 000 M. 9 pistols in addition to the previously acquired ones. 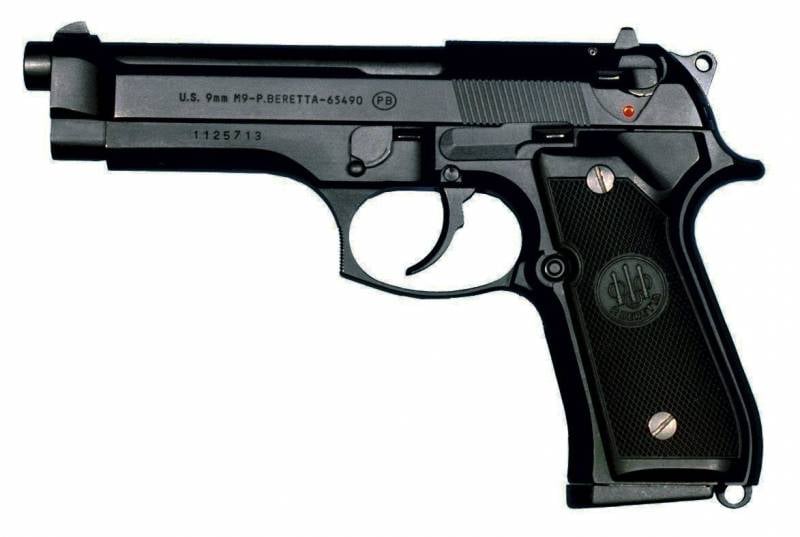 After the final adoption of the Beretta M. 9 pistols, the issue of an army pistol was removed from the agenda in the US Army for a long time.

For more than twenty years of service, the Beretta M. 9 pistols, as part of the outfits of the US military, have probably visited all the hot spots of the planet. During this time, when operating in different climatic conditions, guns Beretta M.9 proved to be reliable and high-quality weapons.

In 1989, the selection of a new pistol for its specific needs was preoccupied by the US Special Operations Command (SOCOM). They were not satisfied with the stopping effect of the 9 mm cartridge, preference was given to the .45 ACP caliber previously used by the US Army. Perhaps the 45 caliber turned out to be more preferable given the need for frequent use of weapons with a silencer. Significantly reduce the volume of the shot can only be provided that the firing is subsonic ammunition. In this case, the large mass of the 11,43 caliber bullet makes it possible to ensure a sufficiently high damaging ability of the weapon-cartridge complex, when using a silencer and the subsonic speed of the bullet.

At the competition for a promising pistol for special operations forces (MTR), only two options were considered - an upgraded pistol based on the classic model Colt M1911 and a new pistol from the German company Heckler und Koch based on the HP USP model. The competition was officially launched in 1991, and in 1996, Heckler und Koch has already started the supply of a CCO pistol with the official designation Mark 23 Model 0 US SOCOM Pistol. 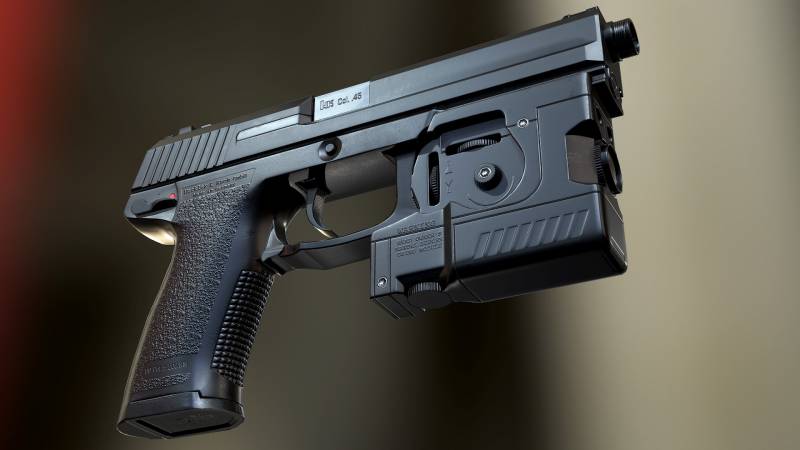 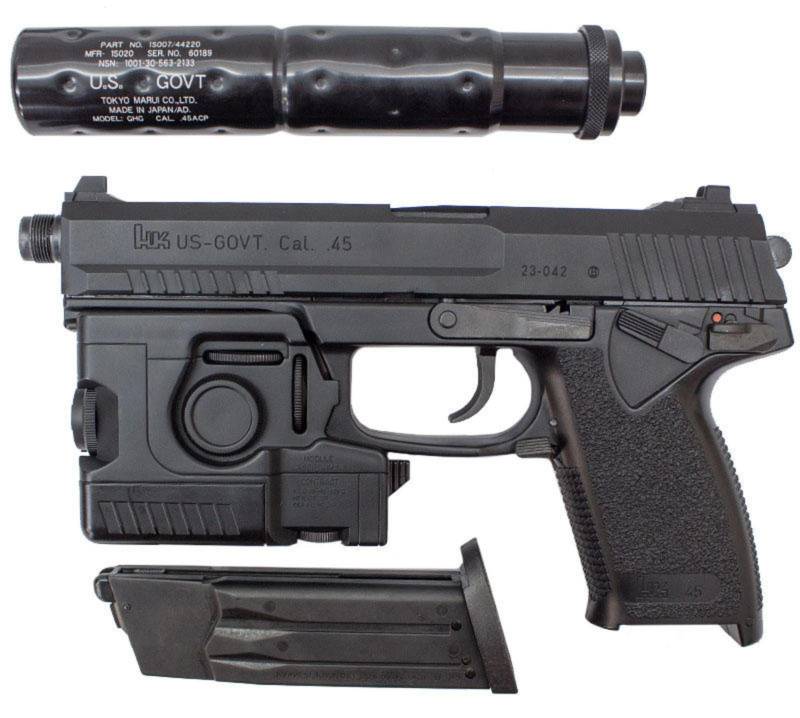 Pistol Mark 23 Model 0 US SOCOM is a complex that includes in addition to the actual pistol, another silencer and aiming block. The aiming unit consists of a built-in tactical flashlight and two laser designators, one of which operates in the visible range, and the other in the infrared spectrum, for use with a night vision device.

The Mark 23 pistol is based on the HK USP pistol. The frame of the pistol is polymer, the shutter casing is made of chrome-molybdenum steel, which is then treated with nitriding and oxidation to protect against corrosion. The frame of the gun and controls are optimized to allow shooting with gloves.

12 ammunition caliber 11,43 mm is placed in the double row magazine. A pistol can fire bullets with increased charge. USM of the hammer type, double action, with the descent force with the pre-cocked trigger 2 kg, in the mode of the self-pickup 5,5 kg. There is a double-sided flag fuse having two on / off positions. In front of the safety device, on the left side of the frame, there is a lever for safe trigger release from a combat platoon.

Resource gun Mark 23 is 30 000 shots. The length of the gun 245 mm, width 39 mm, height 150 mm, weight without cartridges 1100 gr. The Mark 23 pistol turned out to be very large and rather heavy, which is why many fighters, if they have a choice, prefer the less powerful HP USP Tactical pistol. 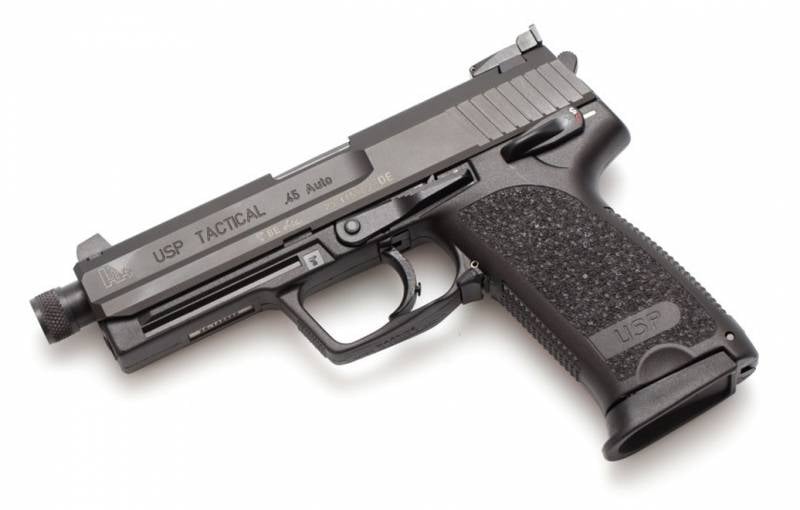 Thus, according to the results of the long-term selection, the US armed forces, in the period from 1988 to 1996, received at their disposal both the main army pistol and the gun for special forces.

You can pay attention to the fact that approximately the same practice has developed in the Russian armed forces, where the Yarygin pistol was adopted for the army, and the special forces actually chose Serdyukov's self-loading pistol “Gyurza” for a more powerful cartridge. However, if in the USA the emphasis is on stopping action, then in Russia they prefer enhanced armor penetration.

The process of selecting an army pistol by the US Army stretched out for 10 years, while the SSO met the 5 years and held a competition without unnecessary scandals and delays. In the next article, we will look at the procedure for selecting a new army pistol in the United States and the current status of this issue.