A series of incidents at Ukrainian NPPs lately

April 8 2019
48
It's no secret that the nuclear industry in Ukraine is in crisis. The main problem of the Ukrainian nuclear industry is obsolete equipment that is used at local nuclear power plants. However, due to the negative attitude of Ukrainian officials towards Russia, the purchase of modern Russian counterparts, which could replace the existing equipment, is not possible, and the American and European equipment is too expensive and not always suitable for safe operation on the Ukrainian technological base. 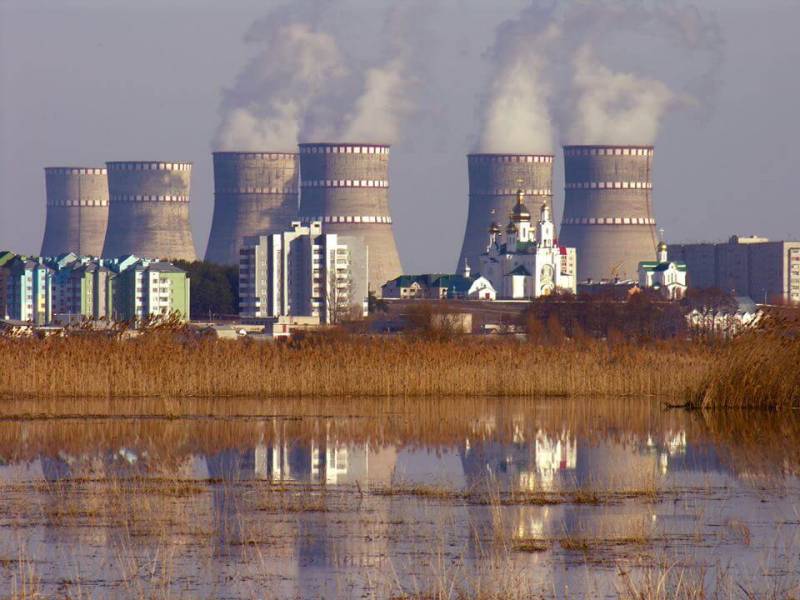 Over the past year, a great number of emergencies and other incidents have occurred at the Ukrainian NPPs. For example, only in January 2018 of the year at the three nuclear power plants there was an unplanned shutdown of equipment, including the main equipment of power units. 11 January 2018 protection at the South-Ukrainian NPP (YuAES) protection turned off the main circulation pump, as a result of which the power of the third power unit fell by almost half. On January 19, the second power unit of the Rovno NPP was disconnected from the grid by the protection system due to the de-energization of the regulation organs of the reactor protection control system, shut-off valves landed and the TG-5 turbo-generator disconnected, the capacity of the unit decreased by more than 60%. 3 January at Khmelnitsky NPP (KhNPP) the second power unit was shut down, the technical failure of the sealing surface of the CPS drive was the cause of the shutdown; in other words, there was a leak. According to experts, the accident does not carry any threat to the public, and the radiation background near power plants is at a safe level.

1 February 2018 of the year an incident occurred that was not related to accidents at Ukrainian NPPs: Sergey Klimov, head of the nuclear safety department at Zaporizhzhya NPP (ZAES), was found dead. According to media reports, suicide was committed. At the time of his death he was 62 of the year.

In March last year, the Ukrainian police opened a criminal case on the fact of unauthorized interference with the work of computer networks of ZNPP. There was a leak of information due to the intervention. The incident became known back in December 2017. According to some information, three employees of the nuclear safety department of ZNPP, including the head of the department, became the perpetrators.

3 April 2018 of the year at KhNPP, the first power unit was disconnected due to the operation of the generator protection system. June 8 at the station was disconnected from the network of the second unit, the reason was the closing of the turbine stop valves. On November 17, the same power unit was shut down to conduct vibration adjustment of the turbo-generator. December 13 at KhNPP was detected damage to the phase B excitation transformer, as a result of which the second unit was disconnected from the network. At that time, the operation of both units of the power plant was stopped.

23 of September last year, the second power unit of ZNPP was shut off to eliminate the defect in the pipeline of the atomic circuit of the main circulation pump.

October 18 XUUME was disconnected from the grid by the third power unit due to a malfunction of the turbine automatic control system.

December 22, the first power unit of the RNPP was disconnected from the network due to an incorrectly generated signal of the automatic protection of the pressure drop in the core of the reactor installation.

A series of blackouts spread smoothly to the 2019 year.

In addition to numerous malfunctions at Ukrainian NPPs, the facts of embezzlement of money by officials of power plants are known.

In January of this year, Ukrainian police officers exposed the fact of appropriation of money at the Zaporizhzhya NPP for a total of 1,3 million hryvnia. According to media reports, two employees of the power plant signed an agreement with the director of the company for the supply of natural mineral materials. Under the guise of fulfilling the terms of the contract, they entered false information in the documents and appropriated ZNPP money.

Currently, Ukraine has 15 operating reactors at four nuclear power plants. 10 reactors have already served a warranty period, and for a few more, the warranty period ends two years later. Of concern is the fact that experiments with western nuclear fuel are continuing in a number of reactors, for which power units of the Soviet development were not designed initially.

Ctrl Enter
Noticed oshЫbku Highlight text and press. Ctrl + Enter
We are
Automatics shut off 6 unit Zaporozhye NPPYatsenyuk urged to denounce the contract with the Russian Federation on the completion of two power units of the Khmelnitsky NPP and file lawsuits in court for compensation "for the annexation of the Crimea"
48 comments
Information
Dear reader, to leave comments on the publication, you must to register.