Libya brief - kaleidoscope of factions with their own interests

April 7 2019
34
The situation in Libya continues to be tense. The troops of the so-called Government of National Unity (PNU) (it’s also the “Government of National Accord - PNS”) managed to recapture the airport, which had almost been captured by the Libyan National Army (LNA) of Marshal Khalifa Haftar. After that, the airport again went to the LNA forces. And the fighting continued. 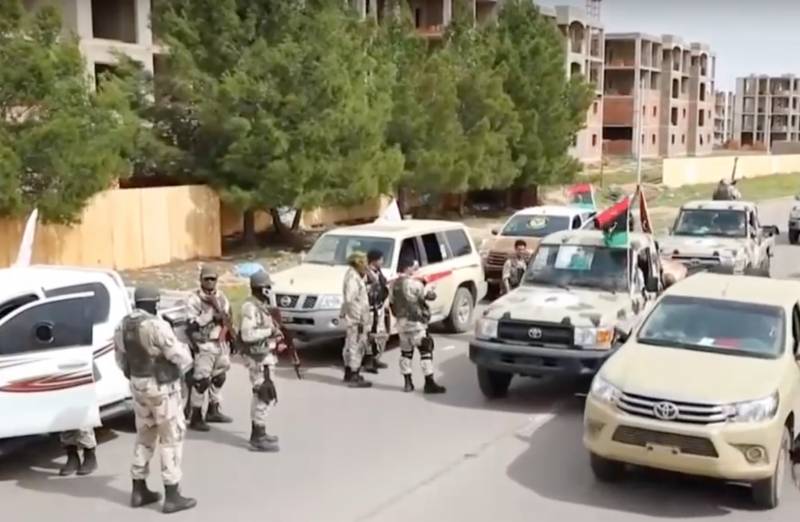 The Libyan national army of Haftar attacks Tripoli from three sides. Representatives of the armed forces supporting the marshal, said Friday that LNA troops had advanced to the southern outskirts of the capital and seized the former international airport. It is worth noting that this airport is inactive and does not have much strategic importance. Later he was recaptured by servicemen of the NUP, but again lost in terms of control.

At the moment, 14 is known to have killed the Libyan National Army, and more than a hundred of the captured fighters have also been reported.

The troops supporting the Government of National Unity, meanwhile, delivered four airstrikes in parts loyal to Marshal Haftar, after which he announced the introduction of a no-fly zone in western Libya. His army promised to strike at any airport from which shock flights would be carried out. aviation.

According to Asharq Al-Awsat, a sudden jump in commodity prices occurred in the Libyan capital. Militiamen loyal to the local administration were transferred in a state of increased readiness for what they called the “coming war”.

Troops from the port city of Misrata (Misurata), which is located 200 kilometers east of the capital, entered the city. The Al-Somud Brigade, led by Salah Badi, has taken up positions in the southern part of Tripoli. Badi is a former commander of Fajr Libya. This organization, whose name is translated into Russian as "Shield of Libya", participated in the civil war on the side of the alliance of opponents of Gaddafi. It is believed that a number of groups within its structure are associated with Al-Qaida (* banned in the Russian Federation).

One of the residents of Misurata who participated in the 2011 uprising of the year reported that weaponwhich was used in that period is now brought back to "protect the capital".

Misurata, which became one of Gaddafi’s centers of resistance during the Civil War, boasts six brigades, up to 200 people each. These groups have weapons caches in several regions. Local and international reports state that weapons range from tanks before the rockets.

According to the 2012 census, 1 has a million people living in Tripoli. Most suffer from economic hardships and complain of abuse by the militias that have seized banks, as well as judicial and state bodies. Local observers believe that the looming war will only aggravate the suffering. However, even before the onset of the troops of Haftar, the capital of Libya did not have a quiet life.

A resident of the south-eastern region of Tripoli, said that the locals are in a state of fear and panic before the upcoming hostilities. Some of them have already fled from the areas south of Tripoli to the western and eastern regions of the country, since they are safer.

The militias belonging to the Muslim Brotherhood * also arrived at the places of possible battles: the crisis brought together previously conflicting groups. Some civilians also armed themselves, realizing that Haftar’s troops could defeat them, which they promise to do.

The Prime Minister of the Government of National Accord, Faiz Sarraj, will rely on nine militia organizations in his battle against the LNA (in fact, on militants linked to the same al-Qaeda).

Tripoli itself is essentially controlled by the so-called. "Big Four" militant brigades. The most famous of these groups is the Tripoli Revolutionary Brigade, headed by Haitham al-Tajuri. It is housed in the neighborhoods of Souk al-Jumaa (market square) and in Gargarish. In addition, the unit controlled the same international airport. Under the command of Haytam al-Tajuri, 1700 fighters.

Other groups include the Al Navasi battalions, led by the Kadur family, previously referred to as the “Special Detention Force” (SSS), led by Abdulrauf Kara, and the Abu Salim Security Center.

One of these formations, concurrently being one of the largest Islamist groups in the country, the CCC, said in its social network accounts that it was moving to the side of the East-Libyan commander. If this information is confirmed, the current situation could be a heavy blow to Prime Minister Faiz Saraj.

It is worth noting that such a turn was predictable. It is not known whether this information will be confirmed, but this team - one of the most trained and trained - consists mainly of the Libyan Salafi-Madhalites. This is a current of supporters of Saudi theologian Rabia al-Madhali, who are many in the ranks of the associates of the Caliph Haftar.

The formation has up to 1600 bayonets, its fighters specialize in internal security and have rather wide autonomy in the PNS structures. The most amazing thing is that the same organization performs police functions in the territory controlled by the LNA, but does not interfere in political issues and is mainly engaged in the fight against generally recognized terrorist groups and drug trafficking syndicates.

The remaining two brigades have a very strained relationship with each other. During the raid on the entertainment facilities, the Abu Salim Security Center clashed with the al-Navasi Battalions. The latter are ideologically close to the CAS, so they can also fly over.

At the same time, it is worth noting that there are several other groups and official structures that have, although less, but still significant influence on the situation. There are Mobile national forces consisting of Berbers, Salah al-Burqi and 33 Brigade Al-Baccarat, who are representatives of Misurata, 301 Battalion of the misrarat Al-Khalbus Brigade - the last army is Deputy Prime Minister Maytyga, observing the interests of the coastal city in Tripoli.

There are also the “Oil Security Forces” - a structure that is funded by the National Oil Corporation of Libya. She has 2000 trained fighters, mostly from areas where oil facilities are located. In June 2018, they briefly beat Al-Sidr and Ras Lanuf from the Libyan National Army, two oil-loading ports, for which Haftar and PNS had a sharing agreement.

Where does everything lead?

This list is incomplete. However, two points are worth noting. Despite common disagreements, these groups can quickly forget about them and unite for the sake of a common goal. This is especially true for the Misurata militia.

Secondly, in favor of the Government of National Accord is played by the fact that it has the support of the world community, the UN, the G7 countries.

The ministers of the latter, in a joint statement, warned Haftar that if he continued the offensive against Tripoli, he could face possible international actions. The Libyan question remains one of the few over which the quorum of the largest states (which previously included Russia) has no disagreement.

The Russian Federation, which Haftar is trying to use as one of the main pillars of support, regularly contacting Russian officials, is not in a hurry to provide visible support: otherwise, we would have noticed this at the last meeting of the UN Security Council dedicated to the exacerbation of the situation in Libya.

Deputy Foreign Minister Mikhail Bogdanov told Haftar in a telephone conversation that Moscow continues to insist on a political solution to "controversial issues" in Libya.

In the meantime, the United Nations is determined to hold a national conference on possible elections in Libya, announced before the onset of the LNA.

Ctrl Enter
Noticed oshЫbku Highlight text and press. Ctrl + Enter
We are
Marshal Haftar's troops are fighting on the streets of TripoliBattle of Tripoli
34 comments
Information
Dear reader, to leave comments on the publication, you must to register.