Demographics or demagoguery? To the performance of Golikova in the State Duma

April 8 2019
372
April 3 in the State Duma of the Russian Federation took place the speech of the Deputy Prime Minister of the Russian Government Tatyana Golikova. The speech was planned, it was held in the framework of the “governmental hour” and nothing supernatural was expected on it. However, the topic of the speech was extremely topical, since it concerned the implementation of national projects in the field of demography, health, science and education. 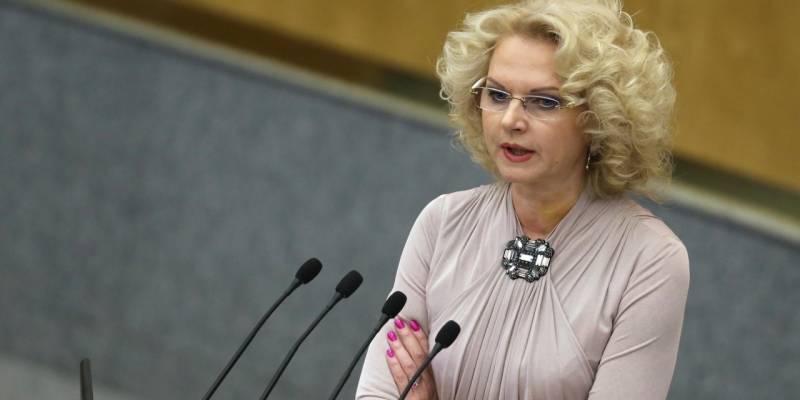 In principle, sensations did not really happen: the numbers voiced by her, one way or another, already appeared in open sources. Unless from the lips of the vice-premier they sounded more weighty, especially since these were already the official results of various kinds of assessments. And nevertheless, let's say something after her.

First of all, Tatyana Golikova stated the fact that the period of demographic growth in the country was over. In 2018, the population of Russia fell by 99,7 thousands of people. And this is taking into account the fact that migrants continue to arrive in the country (although already in a few smaller quantities). But now even their inflow does not overlap with the so-called natural loss.

Mortality in Russia has increased in every third region. And this is very symptomatic. Yes, a fall in the birth rate can be attributed to demographic problems or a “demographic hole”. Yes, it is possible to write off the fall in natural growth, saying that just women in reproductive age have become less, and they do not have time to reproduce the population. But in this case, it is about the death rate itself, expressed in absolute terms.

And this, as we understand, means the continuing degradation of medical support for the population, a drop in the level of income, deterioration in the diet of the average Russian, lower availability of medicines for him, and so on. That is, this is entirely the “merit” of the current government and Tatyana Golikova personally.

This is partly confirmed by other figures. In particular, the mortality rate of the rural population of the country is 14% higher than in cities. This is still the same problem of the lack of medical assistants, poor transport accessibility of many localities and entire districts, the lack of specialists, the difficulty of getting the so-called high-tech treatment by the villagers. Yes, just within the framework of the mentioned national projects it is planned to build in Russia 350 obstetric points in 2019, and in 2020, approximately 1200 of similar institutions with a high degree of wear will be replaced.

The latter, by the way, is not very clear: replaced by what? On new? Fine. But what about the technical support? With experts? By transport? Replacing the walls and roof is not bad, of course, but it does not solve problems. And while it is somehow not very clear how exactly the problems of staffing such institutions will be solved, because efforts in this direction have been made for a long time, in some regions, according to the program “Zemsky doctor”, one million young people were paid and housing was given, but still The situation remains difficult. Now a miracle happens?

It should be noted that cumulatively for four mentioned projects, namely “Demography”, “Healthcare”, “Science” and “Education”, six trillion rubles are allocated for six years. That is about a trillion a year. For Russia, this is a lot of money, and it seems that a lot can be done on them. But while there are problems even at the initial stage: in the current year, the regions use the allocated funds with slippage, at the moment they have mastered approximately 160 billions, or slightly less 20% of the allocated. If these rates are maintained, it will not be possible to fulfill even what is planned, although so far they have an excuse: winter is not the best time for construction. But will it be better in spring and summer? The question is still open ...

Golikova also noted that many regions have reserves to reduce mortality. And this, of course, is a positive nuance. But at the same time, she recognized that it will be very difficult to achieve a significant increase in the birth rate: 35 of millions of women of reproductive age remain in the country, they are less likely to give birth in their youth, because the focus here has shifted to the age from 25 years. And this means that a woman who gave birth so late, the second child, most likely, will not give birth.

Alas, there are no intelligible incentives for increasing the birth rate in the speech of Mrs. Golikova. Yes, it is planned to create 225 of thousands of places in the nursery, which will allow, according to Tatyana Alekseevna, to stimulate women to an earlier and more active childbirth. After all, the opportunity to continue working with a small child in her arms, according to the deputy prime minister, is almost the main incentive for a young mother.

The fact that the “business woman” of this level thinks in this way is not surprising, because for them work all their lives was paramount. But will this really solve the problem? It is very difficult to say. Yes, of course, it will be useful. But so far it seems that the root of the problems lies much deeper, and the work here cannot be fixed.

Probably, in this case, a whole range of measures are needed to stimulate fertility. Directly on the surface lies the payment of higher education for a young mother, and subsidies at the mortgage rate, and, if you like, the “generic qualification” when taking on the state service. I understand that the latter idea will cause mass hatred attacks among Russian “childfree” young ladies, but still it seems reasonable: giving priority to women with children when they are employed in schools, hospitals, the Interior Ministry, customs, and so on. Then the young woman will indeed have an incentive to give birth early, for in this way she will be able to make a career faster and more efficiently than by remaining childless.

The most important thing is that all measures to reduce mortality should not be considered at all in the plane of solving long-term demographic problems. Yes, this is necessary and important for raising the general standard of living, but demography is first of all the birth rate. And without raising this, all measures to increase life expectancy will only be a delay in the inevitable demographic catastrophe. Moreover, any lacquering of reality in this matter is simply dangerous for the nation.

But while we all listen to the endless mantra “and you first secure!” The woman first wants to live well and beautifully, and only then, perhaps, to have a baby or even (what a favor!) Two.

But “first ensure”, alas, does not work, and this is perfectly proved by the example of many European countries, where the standard of living is almost unattainable for the average Russian, and there are no less problems with the birth rate. That is, this approach itself is flawed, the very stimulation of female employment.

And good News we will only wait when, in addition to economic measures to stimulate the birth rate, we hear from Golikova about birth qualifications, the absence of benefits for those who were not giving birth when entering university, the courts adjudicating in favor of fathers, and not in favor of walking mothers, and so on. Yes, all this is not economics; all this is a different way of thinking and level.

Therefore, we will never hear from Golikova and other representatives of this government.

We are in Yandex Zen
Situational analysis of the death of the MH17 flight (Malaysian Boeing 777), made on the basis of engineering analysis from 15.08.2014
Results of the week. “In our cooperative, the board is always agreed”
372 comments
Information
Dear reader, to leave comments on the publication, you must to register.