Knights and chivalry of three centuries. Part of 9. Germanic effigii

Their soul and body are on par with
For each hour, Lord, bless!
And in full happiness let their life pass.
Doubt not, blessed and he
Who honors virtue in himself
As in the one who chose one,
And who, to the joy, took a wife,
Girlfriend in life and fate.
(Walter von der Vogelweide, translated by Wilhelm Levik.)

In the Soviet historical film “Black Arrow” (1985) according to the novel by R. Stevenson there is a touching scene, which, by the way, is not in the novel itself: the minstrel performs a song for the bride and groom, Lord Gray and Joanna Sedley: “Praise to her husband and to my wife ... ”Although, apart from music and poems, almost nothing happens in the frame, this scene makes a very strong impression. It was written on poems of the 13th century German minnesinger by Walter von der Vogelweide “Desires and languor of the days ...” and is very characteristic of the knightly poetry of those years. It is significant that so many knight effigy pair. They show both spouses. That is, the words "to be together in life and death, in illness and in health ...", which the Catholic priest uttered during the marriage sacrament, for many were not at all empty and in their wills they indicated to create an effigy not only for himself, but also his spouse. Or on the contrary, the spouse after the death of the knight-husband wanted to be immortalized in the sculpture lying next to him.

Because of this, we know a lot not only about men's but also women's attire of that time, although in this case we are interested in the first ones. And not English, not French and not Spanish effigy, with which we got acquainted quite often, but with German effigy. And not just Germanic (in part, we also considered them in some “knightly articles” on “VO”), but the effects of the 1050 period - 1350.

In the preceding material, a certain “backwardness” of German knighthood from English and French was noted. But effigii, and immediately paired, appeared in Germany even earlier than in England and France. And then they spread very widely and became an obligatory attribute of the burial of any representative of the nobility. Therefore, there are a lot of them. It is also important that, in contrast to France, nobody destroyed them in Germany, although many effigy were seriously injured and were destroyed during the Second World War. Many effigies in Germany were decorated with cathedrals, in particular, such were Ekkehard (Eckhard) II — marquis of Meissen and Earl of Hutzi from 1032 of the year, and Margrave of the Saxon Oriental mark from 1034 of the year, in 1038 of the year became the sole ruler of Meisen, and his wife Uta Ballenshte. . Their sculptures are located in the Naumburg cathedral in the center of the German town Naumburg (Saxony-Anhalt) and, according to art historians and historians, are perhaps the most memorable example of art of the early Middle Ages. 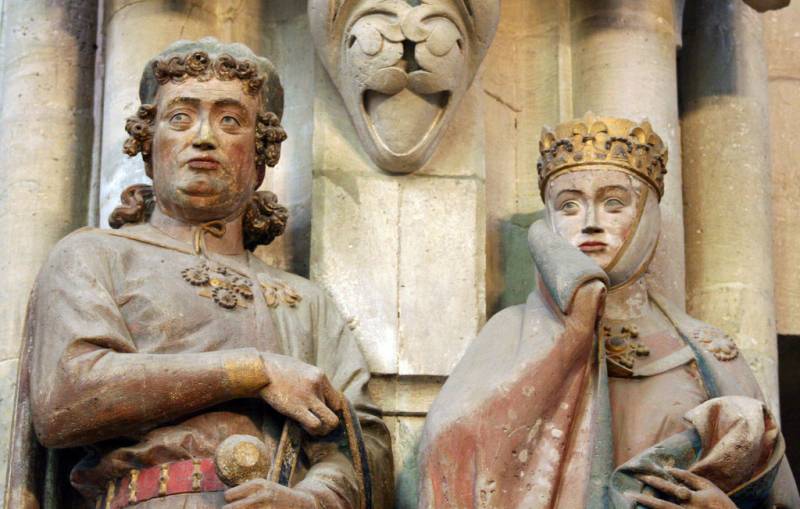 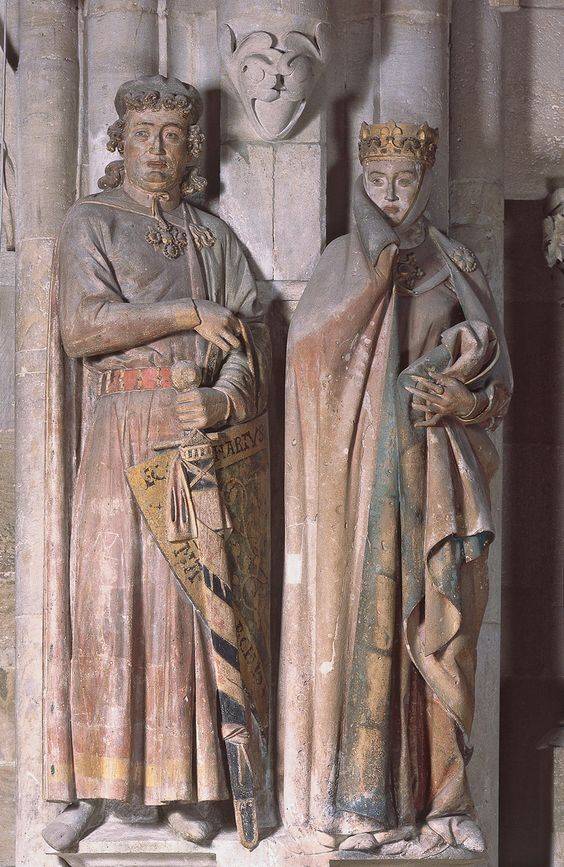 Uta and Eckerhard. Sculptures in Naumburg Cathedral. Pay attention to the very typical sword, on which Eckerhard relies, and a very small triangular shield, not at all characteristic of this time. The fact is that he died on January 14 1046 of the year, and his spouse - October 23 ... of the same year!

Among the early effigy is the famous sculpture of St. Maurice in the Cathedral of St. Catherine and St. Maurice in Magdeburg. And the most interesting thing is that this saint is portrayed with black and Negroid facial features ... only in Germany! History its it is this: in 287 AD Emperor Maximian (c. 250 - c. 310 AD) ordered the Theban legion of Roman Christian soldiers in Egypt, led by Maurice, to go to Agaunum, now modern Saint-Maurice-en-Valais in Switzerland. The fact that the emperor ordered the Maurice’s legion to be made there is disputed: they either had to participate in pagan rites or persecute and kill local Christians.

Being a faithful Christian, Maurice refused to obey the orders of the emperor. In response, the legion was punished with a decimation, and some legionaries were supposed to kill others. Everyone refused to do this, and then, by order of the emperor, the entire legion was executed. The earliest written reports of this incident appeared almost 150 years later, when the Church declared Maurice saint for disobeying imperial orders. Later, Maurice became the patron saint of the Holy Roman Empire, and an altar dedicated to his memory was erected in the Vatican.

Until the middle of the XIII century, St. Maurice was depicted as a white-skinned warrior dressed in armor of the relevant era. But after the reconstruction of the Magdeburg Cathedral in 1240 – 1250, when it was damaged by fire, it suddenly turned into an African. Why an unknown artist intentionally changed the racial identity of Maurice is unknown. It is possible that since he and his people were from Thebes in Upper Egypt near Nubia, they were considered to be “Ethiopians” who, as believed in the medieval European world, lived on the African continent, and all “Ethiopians” are ... negros! Whatever the reason, this change was the first artistic image of a black African in medieval Europe. Interestingly, the "Negro" he is only in Germany. In the churches of Switzerland, France and Italy, he is depicted as white.

Interestingly, St. Maurice is shown in multi-layered mail armor, and the chain mail cap is worn separately from the hauberg, and it is equipped with a breastplate. On top of the chain mail, he wore not a surcoat, but something like a cape with a slab of metal plates for which the heads of rivets indicate. Chainmail gloves are woven to the sleeves.

Effigiyu Heinrich the Younger, mind. 1298 Propulsion Magdeburg, Germany. Please note that it has a typical coat of arms, but its rectangular-shaped ellet do not have stamped images, which does not correspond to their purpose at all!

Plane gravestone on the stove. Before us is Grafen von Leuchtenberg, mind. 1300 Baden Cathedral, Germany. As you can see, this knight was quite satisfied with purely mail armor, over which he wore a surcoat with numerous sewn wedges along the hem.

Heinrich Bayer von Boppard, mind. 1355 (Museum of Bode Art Museum in the ensemble of the Museum Island in Berlin). On the deceased fully mail armor, and with wide sleeves and surcoat, also with wide sleeves. Very well visible is the sword band and the dagger basilard.

Johann II von Kazenelnboden, mind. 1357 Abbey Ebermach, Germany. Obviously rich was a knight and watched fashion. On it is a helmet-bascinet with a visor on the top loop (an early version of the fastening was taken on knight's helmets), and on the day of the spear strike a completely closed “large helmet” with a large wing — a “crest”, which also showed its coat of arms. The torso gracefully fits the mail and a short Jupon on top of it, on which there are only two functional chains - one to the handle of the dagger and one - with a “button” used to fasten the “big helmet” behind him. Knee pads and greaves are all-metal, but the sabatons are still chain mail. The rich belt and the finish of the jupon and the armor indicate that it was not alien to the decorations. 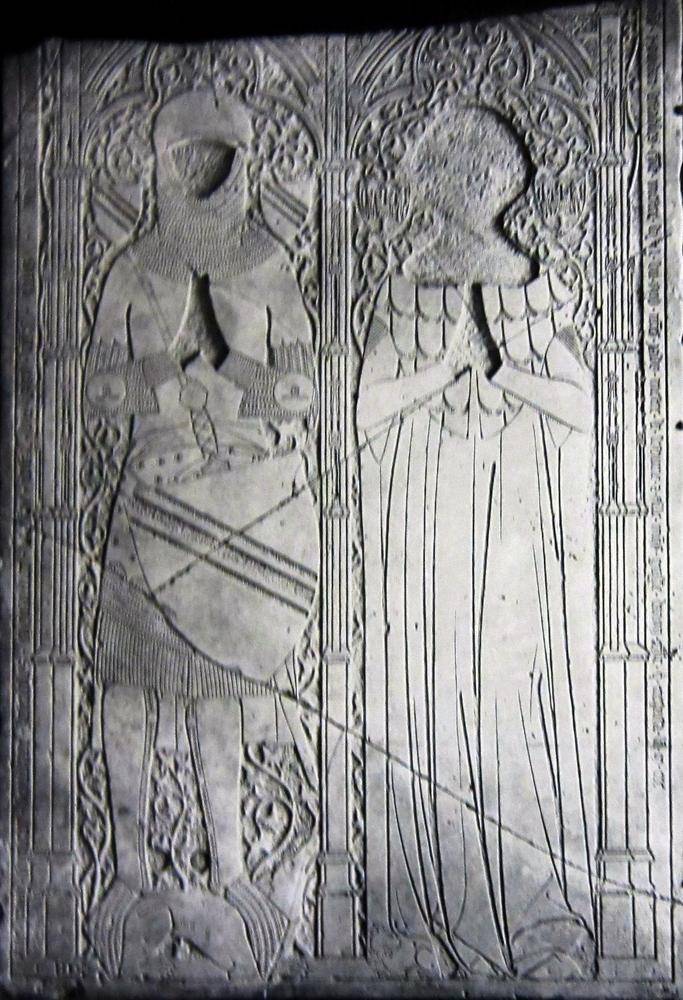 And finally, one of the twin effects: Goudarda d'Estable with his wife, 1340, Abbey de Marsili, Yonne, Burgundy, France. As you can see, his armor is very similar to the German samples, or rather, the German samples are similar to his armor. One-piece forged greaves have already appeared, but the sabatons are still chain mail. 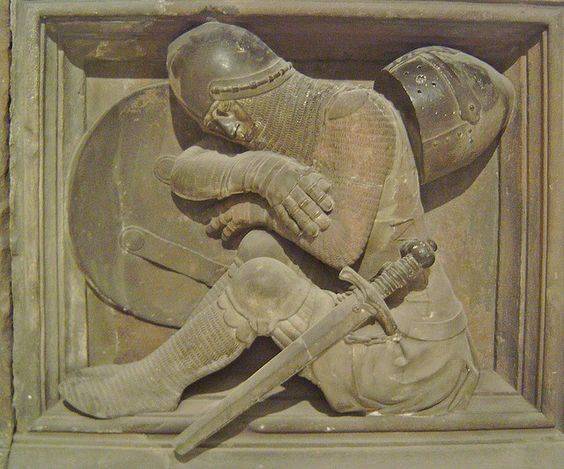 Sculpture "Sleeping Warrior" approx. 1340-1345 “Warriors at the Holy Sepulcher”, Museum of Notre Dame, Strasbourg, France. He is wearing a bascinet helmet with a detachable barmica, a “big helmet”, temporarily abandoned behind his back. The torso still protects the chain mail, but metal bulging shoulder pads and knee pads have already appeared. Gloves - worn, with riveted on the skin plates. The shield is round. Apparently for action as an infantryman. 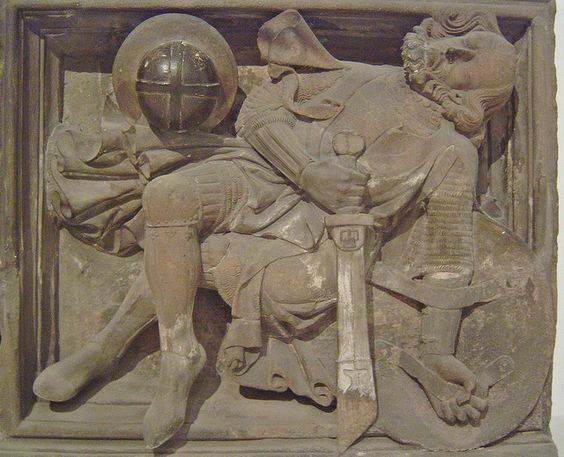 Another "sleeping" and, apparently, a rank lower than the first, or poorer. Above the knees, only quilted pantaloons, a helmet — an “iron hat” (“caphel-de-fer”) with a cross-shaped reinforcement of a dome, a chain mail with short and wide sleeves. As weapons massive felchen (falchion). It is interesting that on his left hand, under his shield he has a tubular bracer, but on the right - clearly from strips of thick plantar skin. For some reason, he lacked two identical means ...

These are the effects of the Holy Roman Empire, and you see how much they have told us today ... 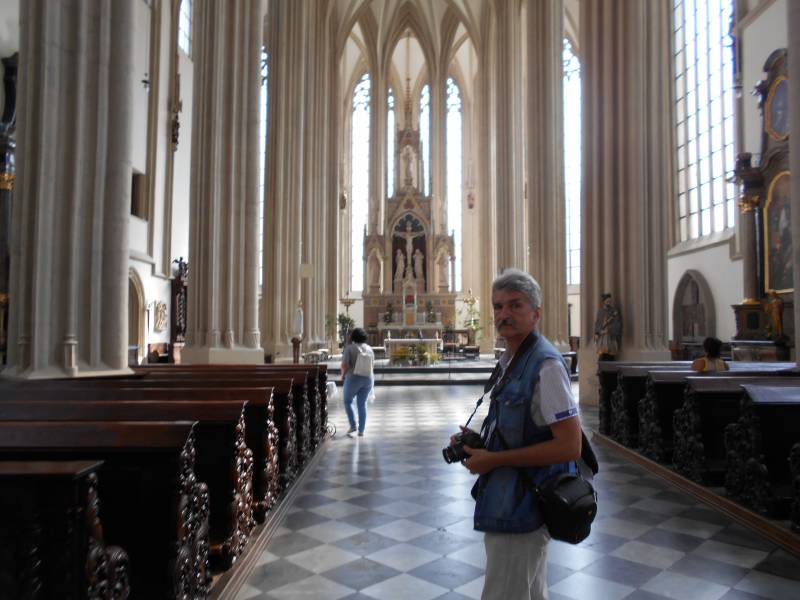 P.S. But this photo appeared here not by chance. It’s just that a whole number of VO regulars suggested in their comments to put along with the articles also the photos of the authors of certain materials ... “at work”. Well then - here is the first such photo. You will see such a person in one of the cathedrals of Europe this year, do not hesitate - this is the author of “knightly articles” busy searching for effigy!