Knights and chivalry of three centuries. Part of 8. Knights of the Holy Roman Empire

I am ready to die in battle
In the battle for the Lord of Christ.
All those whose conscience is unclean,
Who hides in his land,
The gates of paradise are closed,
And God meets us in paradise.
(Friedrich von Hausen. Translation by V. Mikushevich.)

For us, the Holy Roman Empire is always Germany. And if Germany, then it’s the Germans. And since the Germans, then the crusaders, and the crusaders - we know this from the movie "Alexander Nevsky", and only did that we fought with Novgorod and Pskov. In fact, this is a very simplified interpretation historical situation. First of all, because this empire has never been united on either ethnic or social grounds. That faith, faith was the same for all, and only it, until time, rallied this state association. And in the XII – XIII centuries. it included four states at once: the kingdom of Germany, the kingdom of Bohemia and Moravia, the kingdom of Burgundy, or Arles, and the kingdom of Italy, including the Papal States. It was created in 962 by the German king Otto I the Great, but from the very beginning it was a decentralized state formation, and even the emperor’s power in it was not hereditary, but elective! True, by 1134, there were three kingdoms in the Holy Roman Empire: Germany, Italy and Burgundy. Only in 1135 did the kingdom of the Czech Republic enter it, whose legal status was, however, settled only in 1212). 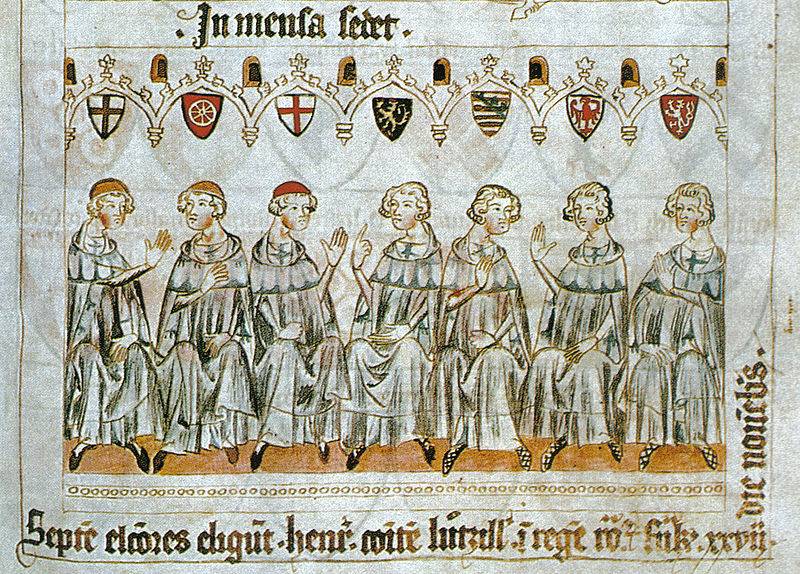 Seven electors elected Emperor Henry VII of Luxembourg. From left to right: the archbishops of Cologne, Mainz and Trier, the dukes of Palatinate and Saxony, the margrave of Brandenburg, king of Bohemia. (Picture on parchment 1341 of the year; today in the state main federal state archive in Koblenz, Germany).

Germany itself originated from the kingdom of Louis the German, created by the Carolingian treaties in Verdun (843) and Mercenes (870). It consisted of modern western Germany, the Netherlands, eastern Belgium, Luxembourg and much of northeastern France. On the eastern border to 1100, the Empire was made up of stamps or marches of Billungs, Nordmark and Thuringia in eastern Germany, and the March of Austria. In the south, the Kingdom of Germany included eastern Switzerland, a large part of modern Austria and much of Slovenia. 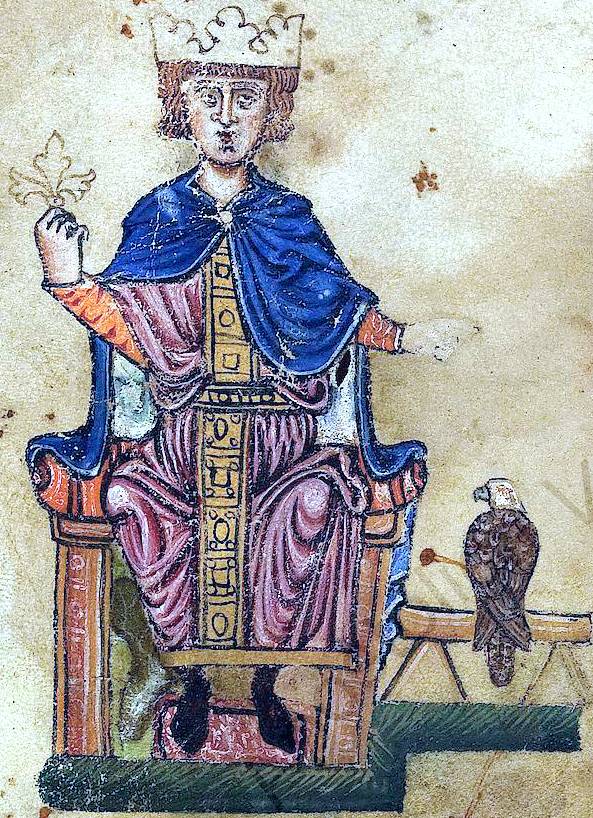 For many years these borders remained largely unchanged, with the exception of the annexation of Pomerania, Polish Silesia and, temporarily, some Baltic regions, which were ruled by the Teutonic knights in the 13th century. However, since the middle of the XII century, the importance of the power of the Emperor as the king of Germany sharply decreased, and local separatism, on the contrary, strengthened. This, in turn, had profound political and military consequences. Therefore, we, for example, will have to allocate Italy to a separate region and consider what in its lands was related to knighthood, separately from the processes in the northern territories. 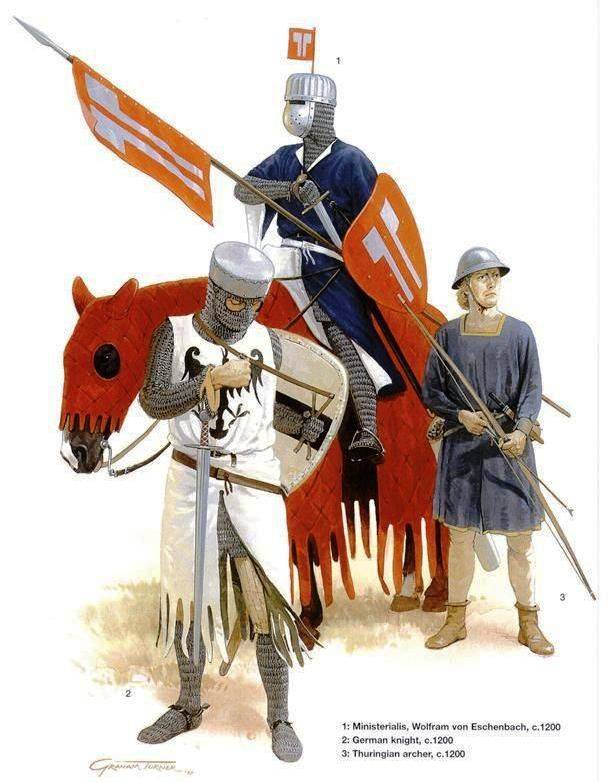 First of all, a feature of the "German armed forces" of the Middle Ages, or rather the time studied, was the presence in them of large, but often poorly trained and insufficiently armed contingents of infantry, which was not the case in England or France. That is, the peasantry in a number of German lands for a long time played a certain role on the battlefields, and many such peasant warriors were serfs, but at the same time served in cavalry. As the power of the emperor-king weakened, the feudal elite was not very willing to fulfill its military obligations. Let's just say - even less willingly than the feudal elite of France and England. Therefore, just as in England and France, all this time there was a process of increasing the role of mercenaries, and mercenary itself began to play an important role in the late 12th and early 13th centuries. Many Empire mercenaries supplied Brabant, the Netherlands, neighboring Flanders and, of course, Genoa, which supplied troops to the crossbowmen. And most of these "military people" belonged to the infantry. Marines, armed with spears, hook peaks and other types of piercing and chopping poles weapons infantry, with high efficiency used even at the beginning of the XIII century. Moreover, the appearance of lamellar armor among the horsemen of the German knights may have been a partial response to the threat from precisely such infantry, especially from the crossbowmen. 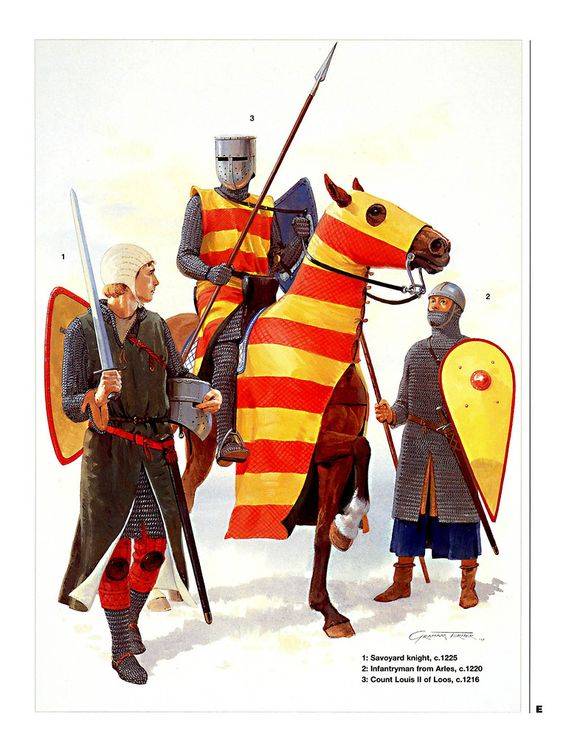 That is surprising, but the “rural militia” in Germany lasted much longer than in neighboring France, although the infantry role should be associated primarily with the growth of German cities, which became the main sources of people and money in the Empire. The city militia soon became much better armed, as indicated by the increased effectiveness of the same Flemish city militias who successfully fought with the French royal troops in the XIV century (three victories and three defeats from six major battles between 1302 and 1382 years). In addition, the early use of artillery in Germany was directly connected with cities such as Metz, Aachen, Deventer, Soest, Frankfurt am Main and Cologne, as well as the cities of neighboring French Flanders. All the earliest references indicate the use of firearms in the Rhineland and the Meuse Basin. The only exception is Styria in the extreme southeast of the German kingdom. Although there are even earlier, but very vague references to obtaining firearms across the border of Italy, although she, of course, all this time was within the Empire. 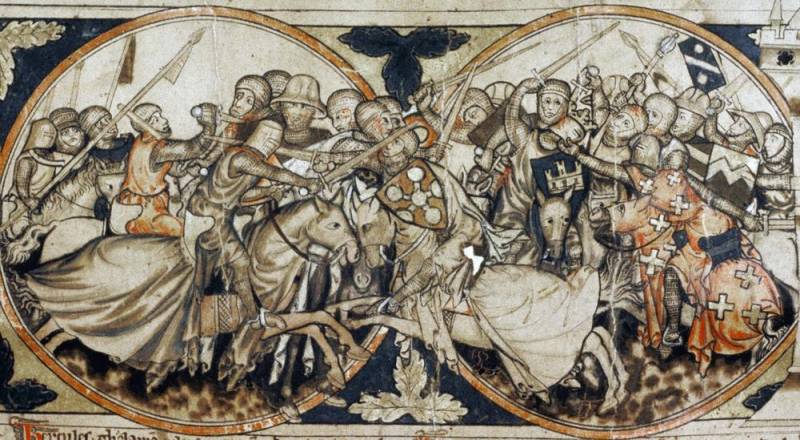 Miniature from the Genealogy of the Kings of England to Edward I 1275-1300 manuscript (Bodleian Library, Oxford) This illustration attracts the attention of the variety of armor and weapons involved in horse fights, as well as various combat techniques. All of them are identical, only with padded surcoats, chair seats and horse blankets, although the latter are not available at all.

That is, the social development of various areas of Germany was directly reflected in the development of military affairs in them. For example, since its western regions were highly urbanized, city militias and mercenary troops recruited by the magistrates became important in them. The areas where farming was developing had the traditional feudal structure of the "army" - feudal cavalry and accompanying servants, and small contingents of peasants most suitable for military service. In the Swiss mountains, on the Frisian islands, in the Dithmarschen swamps or among the eastern settlements on the River Weser, the home guard also continued to play a major role. But here the main reason was their social and economic isolation. The appearance of equestrian crossbowmen in some parts of southern Germany may have been due to the influence of Eastern Europe, Hungary or the Balkans, because it was from there that horsemen who knew how to fight not only with knightly weapons, but also shoot a bow straight from a horse. 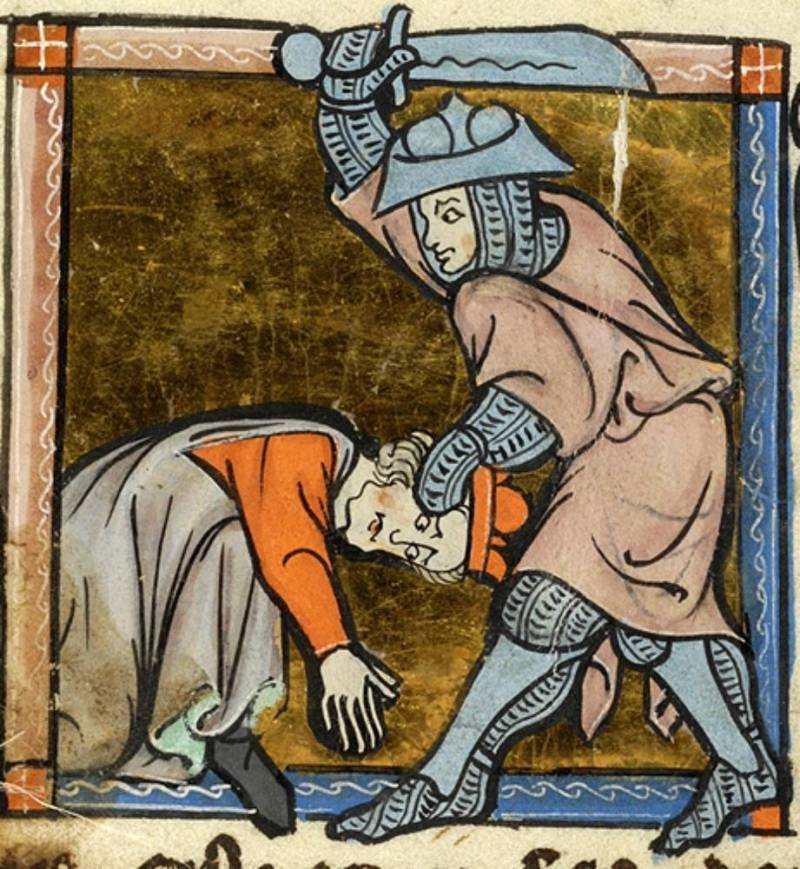 Impressive warrior of the early XIV century. in an “iron hat”, greaves, and a felchen cleaver (falsion) in his hand. Thumbnail from the manuscript “Abridged Divine Stories), 1300 -1310, Amiens, France. (Pirpont Morgan Museum and Library, New York)

As for Bohemia and Moravia, at the beginning of the 11th century both of these areas were under Polish rule, but then became part of the Holy Roman Empire. Both of these regions have never played a dominant role in the fate of the empire, although they regularly supplied contingents of warriors to its monarchs. 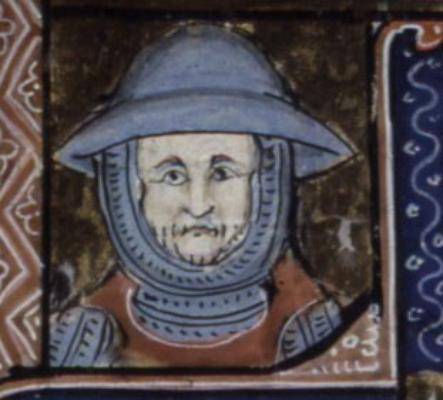 Bohemia was under a strong, almost overwhelming, German military influence throughout the Middle Ages. Moreover, this was particularly evident in relation to its cavalry elite, which used horse and horse armor, very similar to the German one. However, in the main, the armament of the knightly cavalry of Bohemian feudal lords was always more old-fashioned compared to what was observed in the neighboring German provinces until the XIV century. Interestingly, the bow in these lands was not as popular as the crossbow, and firearms also fell into the Czech Republic with some delay. In any case, it is not mentioned in any of the documents that have survived to our time until the beginning of the 15th century, even if artifacts that have been preserved in Czech museums date back to the 14th century. 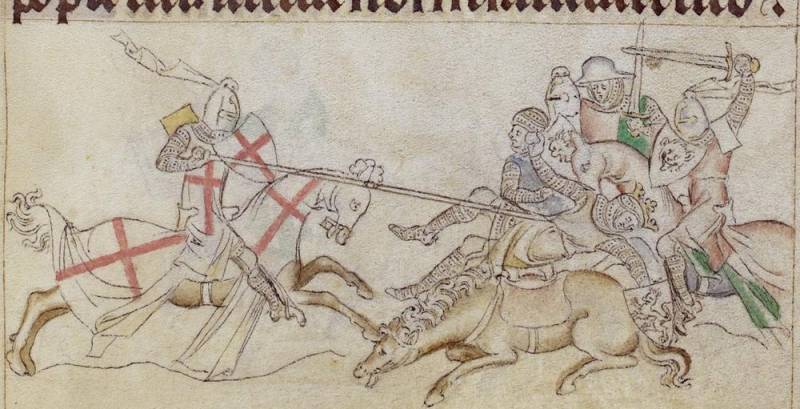 The Kingdom of Arles, which is also known as the Kingdom of Burgundy, was created in the 10th century from Burgundy and Provence, which, in turn, were the result of the Verdun Treaty signed in 843 year. By the end of the XI century, the kingdom, consisting of what is now western Switzerland, France to the east of the Rhone and Sonnes, as well as several areas to the west of these rivers, became part of the Empire. During the 13th and the first half of the 14th centuries, most of the southern part of the kingdom was gradually absorbed by France. And Burgundy, it seems, did not have any distinctive military features, except for the preservation of the mass of peasant infantry in the Swiss mountains. As for the feudal nobility, he was under strong French, German and Italian influence. 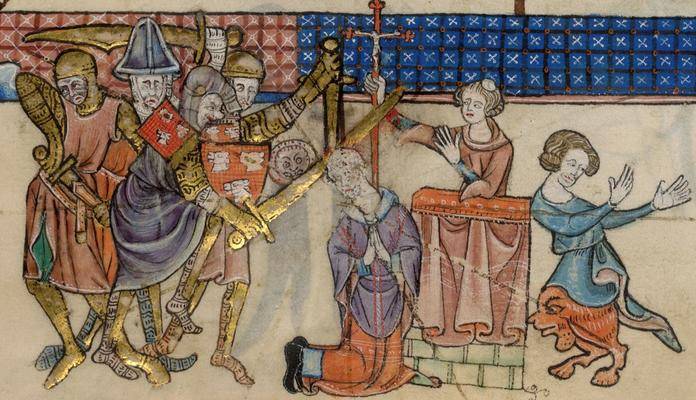 As in other western parts of the Empire, as well as in Italy, feudal troops here were to receive payment if they were sent outside their own possessions. As elsewhere, here more and more relied on mercenaries, and the same crossbowmen, for example, were recruited in Italy, and the infantrymen in Spain. Horse crossbowmen, which appeared in the XIII century, were allegedly paid professionals. At the same time, the presence of crossbows were not recorded among the Swiss until the beginning of the XIII century. But then this weapon became very popular among the inhabitants of almost all Swiss cantons. 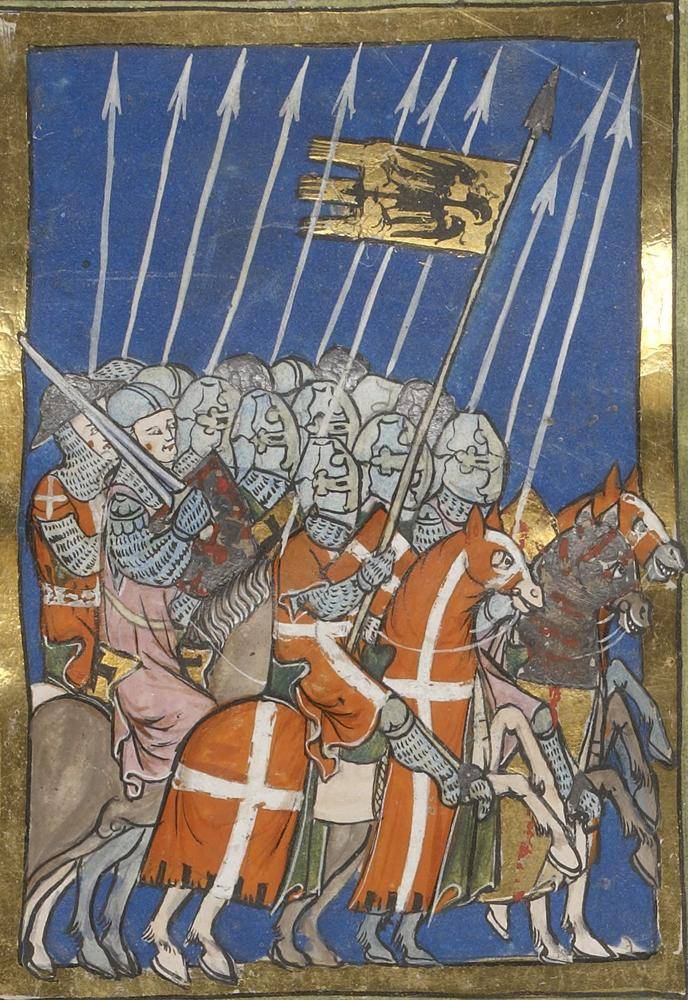 "Knights of the Holy Roman Empire in the campaign." Illustration from "Lee Fet de Romain" (Epistle to the Romans), Italy, Naples. 1324-133 (National Library of France, Paris)

The mountainous peasantry of modern Switzerland, living in the German duchy of Swabia and in the north of the Burgundian kingdom, later gave one of the most effective and famous crossbowmen of the late Middle Ages. Many Swiss people served as mercenaries in northern Italy as early as the 13th century, where they became acquainted with the most advanced tactics of infantry. And then they surprised all of Europe, first by successfully defending their mountainous homeland against knightly cavalry, and then turning into the most effective hired infantry of the 14th century. Moreover, it is interesting that at the beginning of the XIV century they relied primarily on halberds, and only in the middle or the end of the XIV century did they supplement them with long spears.