March 29 2019
155
Information and analytical portal "Military Review" under the heading "Friday Fans Club" proposes to discuss today's meeting, which for some reason is not widely spoken in our country. Even on major federal channels, if something is said about it, then in passing. And the topic is burning. And she, like the meeting itself, could have been discussed at a large round table. However, the reason for the meeting to be friendly, on the basis of modern political realities, can not be called. 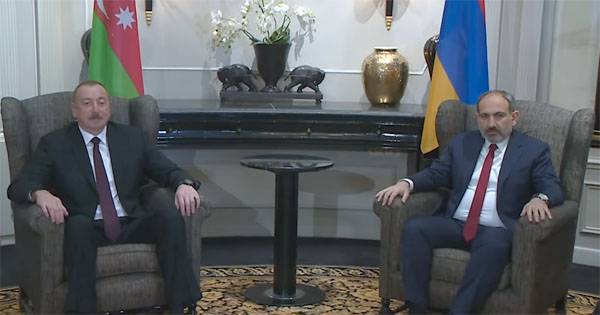 So, today in Vienna, on the banks of the Danube, at the foot of the Alps, there are President of Azerbaijan Ilham Aliyev and Prime Minister of Armenia Nikol Pashinyan. The round table is absent, but the members of the delegation in the meeting room are still located in a “circle”.

The theme of the negotiation process is the settlement of the conflict in Nagorno-Karabakh. The fact that Baku and Yerevan do not go beyond the possibility of direct negotiations suggests that there are points of contact. However, while these points are very poorly visible for a lot of mutual demands and accusations. At least, poorly viewed earlier.

In addition to the heads of state, the participants in the talks include heads of foreign affairs agencies and representatives of the OSCE, including the plenipotentiary representative of the head of the organization.

The following fact attracted attention: for the first time in a long time, the heads of the republics spoke in private - without members of the delegation and the chambers. It is noteworthy that the one-on-one conversation lasted almost twice as long as the conversation in the format of delegations - about one and a half hours. This means that the head of Armenia and Azerbaijan has a certain kind of interest in the one-on-one possibility. Against the background of the fact that this is generally the first official meeting of Pashinyan and Aliyev, we can talk about the possible continuation of the dialogue.

Another fact that draws attention to itself: the major Azerbaijani and Armenian media today come out with very restrained materials, in contrast to the usual double-edged interpretations of this nature such as “Azerbaijanis are to blame for everything” and “Armenians are to blame for everything”. And this is also an indicator. To look around and think, is an option not only for politicians, but also for those who cover their work and contacts for the public.

Yes, they did not seem to drink a glass of wine. On the kebab "did not go."

But the main thing here is not to interfere, not to urge on a "breakthrough." Quickly, as you know, only cats ...

Both leaders are understanding, aware of the fact that they can go to peace step by step without excessive fever. And peace in the Caucasus is one of the most important guarantees of stability in Southern Europe, as well as in a strategically important region like Asia Minor. It is necessary to understand that detractors are more than enough. Therefore, it is important for the leaders of the two republics not to succumb to those slogans of provocateurs (including from internal political ones), which will again lead to escalation and bloodshed.