Army pistol in Russia. Part of 1


In the USSR, a gun like weapon was probably at the very end of the list of current problems of the armed forces. The role of the pistol in combat is extremely insignificant, respectively, and this issue received minimal attention.

Essentially, the whole история The army pistol in the USSR is a transition from a revolver of the Nagant system to a TT pistol (Tokarev's Tula) and from a TT to a Makarov pistol. At the same time, during a certain transitional period, these types of weapons were exploited (and in some places they are still being exploited) simultaneously.

Army pistols of the USSR: “Nagan”, TT, PM (images may not coincide in scale)

In addition to the main regular weapons, which are in service with the armed forces (VS) and the Ministry of Internal Affairs (MVD), some other models have been adopted - the Stechkin automatic pistol (APS), small-sized self-loading pistol (PSM), self-loading special pistol (MSS) and others . However, their use was rather limited, and they did not claim the role of the main pistol.

In fact, the collapse of the USSR was greeted by the Supreme Soviet and the Ministry of Internal Affairs of the USSR with a single unified pistol - a Makarov pistol chambered for the caliber 9х18 PM. Formed after the collapse of the USSR, restructuring and publicity, in combination with rapidly declining defense budgets, forced developers and manufacturers of small arms to look for an opportunity to earn anything they want. One of the areas of the search for funding was the topic of creating a new army pistol. By this time, it was believed that the Makarov pistol was outdated, the power of the cartridge and the number of cartridges in the store were insufficient, the ergonomics did not correspond to modern samples of small arms.

The easiest way was chosen by the Izhevsk plant, having released an updated version of the Makarov pistol - the Makarov pistol (PMM) in 1994 year. The design of the gun is enhanced to enable high-pulse 9 × 18 PMM cartridges to be fired, approximately 70% of PMM parts are interchangeable with those of the PMM. Magazine capacity has been increased from 8 to 12 cartridges by expanding the handle and using a two-row magazine with single-row feed.

The gun is used to a limited extent by the Armed Forces, the Ministry of Internal Affairs, the Federal Security Service, and other security agencies, but there is no need to talk about complete rearmament. Among the shortcomings, it can be noted that the distribution of reinforced 9x18 PMM cartridges, along with the usual ones, leads to accidental or deliberate loading them into non-upgraded PM, which, when trying to fire, leads to accelerated wear of the pistol, and sometimes to its failure with the gunner getting various injuries . 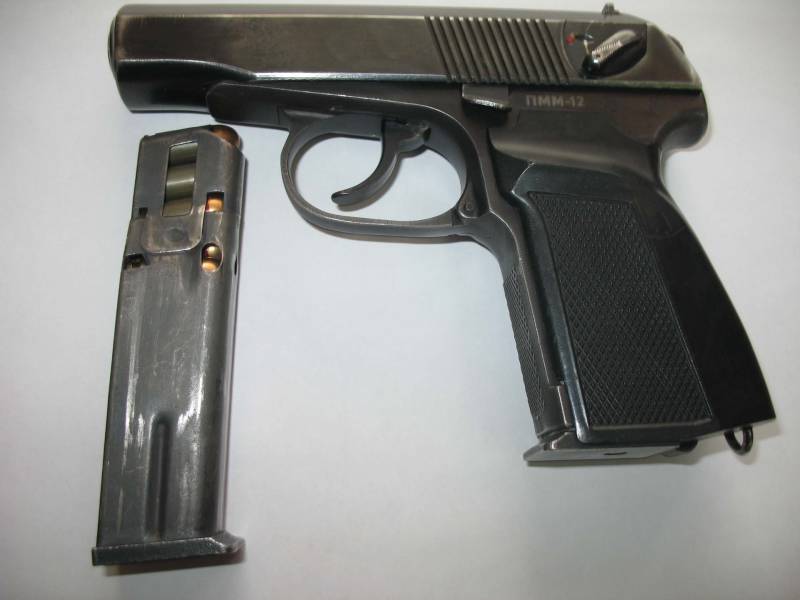 For the civilian market, the Skif and Skif-Mini pistols with a polymer frame were developed on the basis of the PM. But since in Russia the civilian market for rifled short-barreled weapons was not and is not, and competition is too strong abroad, these samples have not been developed. 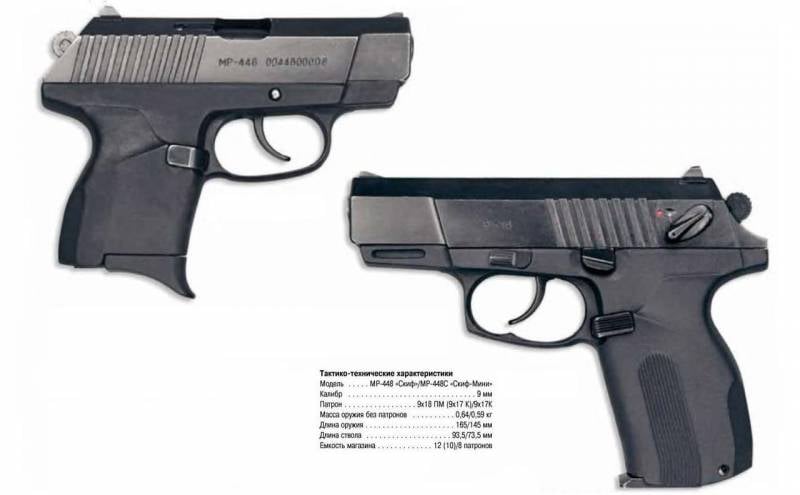 In 1990, the USSR Ministry of Defense announced a competition for a new pistol, designed to replace the Makarov pistol that was in service but did not meet modern requirements (R & D Grach).

As part of this work, the Tula Central Design and Research Bureau for Sports and Hunting Weapons (TsKIB SOO - since 1997, a branch of the Tula State Unitary Enterprise “Instrument Design Bureau” - GUP “KBP”) developed the OT-27 “Berdysh” pistol. The development was carried out by I. Ya. Stechkin (the designer of that same “Stechkin”) and B. V. Avraamov, therefore the pistol is sometimes referred to as the PSA index (Stechkin – Avrahamov pistol).

The design feature was the ability to use different types of cartridges - 7,62x25, 9x18 PM or 9x19, after replacing the barrel and magazine. Also, despite the possibility of using powerful 7,62x25 and 9x19 cartridges in the “Berdysh” pistol, a circuit with a free gate, as in PM, is used to compensate for recoil in the lower part of the gate a special damper is installed. The bolt and frame of the pistol are made of steel, on the handle can be installed wooden or plastic lining.

The Ministry of Defense was not interested in this gun, and in 1994 the year it was withdrawn from the competition for an army pistol, later in small quantities entered the Ministry of Internal Affairs. In the opinion of some users, a rather interesting pistol, it is a pity that it is absent in Russian shooting galleries, and there is no way to evaluate it personally.

Small-sized pistol OTs-21 "Kid" can be considered as a competitor PSM. Unlike the latter, it uses a sufficiently powerful (taking into account the dimensions of the gun) cartridge 9x18 PM (there are modifications - OTs-21C chambered for 9x17 mm and OTs-26 chambered for 5,45 × 18). The gun is entirely made of steel, with a hidden trigger, there are practically no protruding parts in it, which makes it convenient to carry and remove. Shooting is carried out only by a self-coil, there are no manual fuses, the safety of wearing with a cartridge in the chamber is ensured by the great effort required to pull the trigger.

Gun OZ-21 adopted by the prosecutor's office of the Russian Federation as a weapon of self-defense for prosecutors and investigators. This model could well be popular in the civilian market, as “ladies'” or spare weapons, including among security forces. 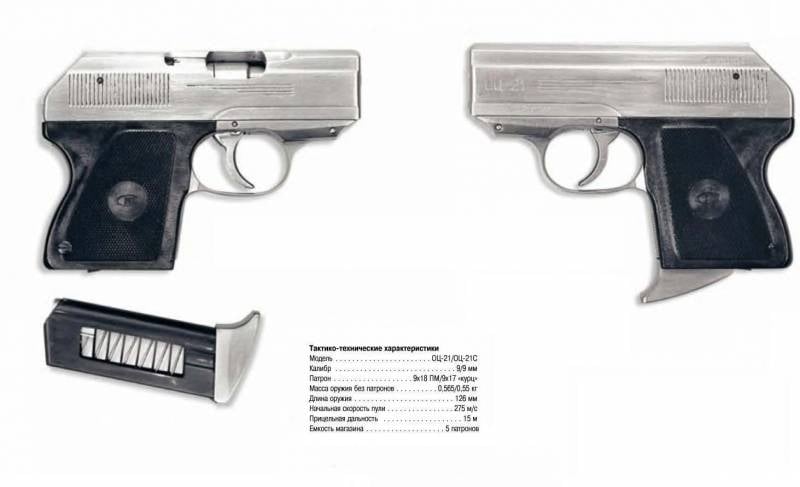 The OTs-23 automatic pistol “Dart” was developed by TsKIB SOO under the direction of I.Ya. Stechkin by order of the Ministry of Internal Affairs of Russia at the end of 1993. A special feature of the pistol was the used ammunition - 5,45x18, in conjunction with the magazine on the 24 cartridge and the possibility of firing bursts, with a cut-off 3 shot. Due to the small stopping power of the 5,45x18 cartridge, the pistol did not interest the customer and was produced in single copies. 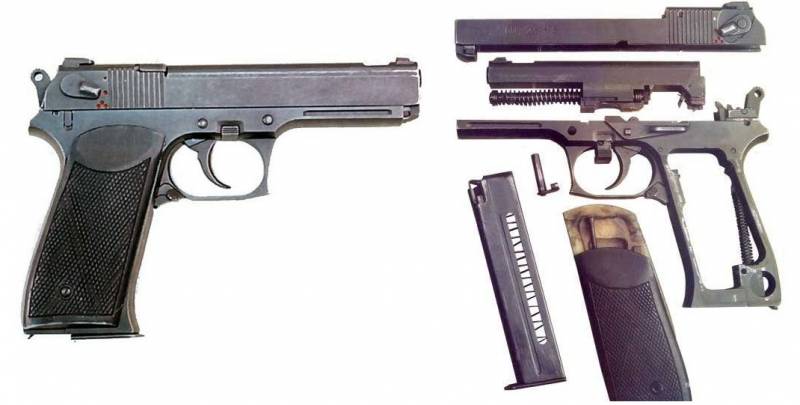 For this weapon I want to make a few digressions.

First, after several cases when the FBI officers died in clashes with criminals, various tests and studies were carried out to verify the effectiveness of ammunition for short-barreled weapons.

In the end, the conclusions were formulated as follows:

1. At the moment, there are no personal weapons that can instantly immobilize an attacking enemy except for an accurate hit to the head or cervical spine with the destruction of the brain or spinal cord.
2. Since an immediate defeat cannot be guaranteed by any combination of calibers and bullets, the FBI agent must fire to defeat as long as the target is a real threat. It is recommended to use weapons with a larger capacity stores.
3. The decisive factor is the degree of preparation of the shooter, the ability to quickly and accurately fire in a stressful situation.
4. An important factor is the depth of penetration of the bullet into the body.
5. The likelihood of a larger-sized bullet being hit is higher, but the capacity of the magazine is reduced (see § 2), and the recoil often increases (see § 3).

Secondly, the widespread use of personal protective equipment (SIB) led to the emergence of small-caliber cartridges developed under the concept of PDW (Personal defense weapon), 4,6 × 30 mm and 5,7 × 28 mm caliber. These munitions combine the low mass and recoil of the pistol cartridge with ballistics and the penetrating power of the intermediate cartridge, and allow you to hit opponents in Kevlar body armor at a distance of up to 200 m. 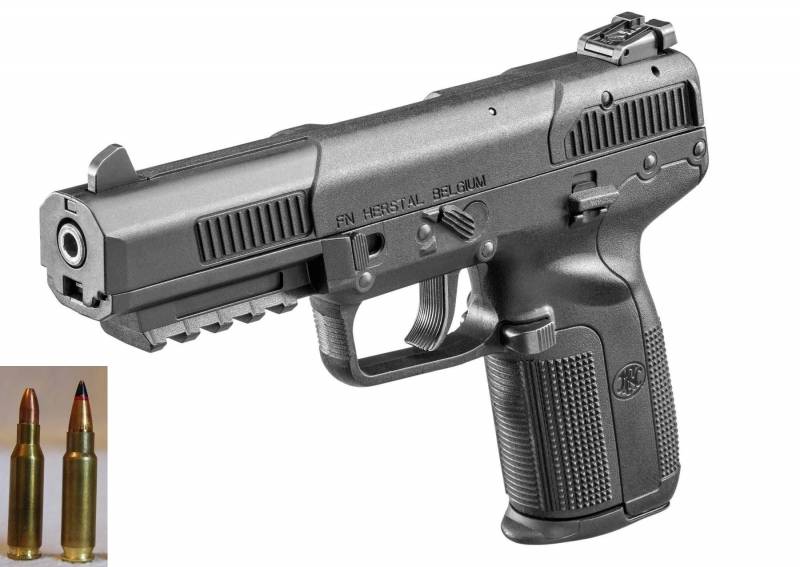 In connection with the foregoing, the idea arises that on the basis of the 5,45x18 cartridge, an enhanced cartridge can be developed, for example, caliber 5,45x28 mm. And on the basis of this cartridge, a pistol was created according to the OTs-23 ideology, with 24-26 ammunition ammunition, and the possibility of firing single shots and short bursts of 2-3 shots. Such a weapon can provide a high probability of hitting the target, including in the NIB, in melee, and an increased distance of defeat when shooting single shots. Of course, additional theoretical studies and practical tests will be required to confirm this assumption.

On the basis of OTs-23, an automatic pistol OTs-33 "Pernach" was developed, intended to replace the APS. Caliber pistol OTs-33 - 9x18 PM. Compared with APS has a simpler design. The barrel of the gun is made movable to reduce the perceived recoil and reduce the rate of fire (the APS has a separate mechanism for forcing a reduction in the rate of fire). The safety lever is doubled on both sides of the gun. Capacity of standard 18 magazine cartridges, elongated 27 cartridges.

The gun did not interest potential customers and only in small quantities entered the warehouses of the Ministry of Internal Affairs.

Tula state unitary enterprise “KBP” began the development of a promising army pistol from the middle of the 90-s. Distinctive features of the developed pistol П-96 are a plastic frame and locking by turning the barrel 30 degrees. The P-96 pistol at the time of manufacture was the only domestic pistol with a shock trigger mechanism. 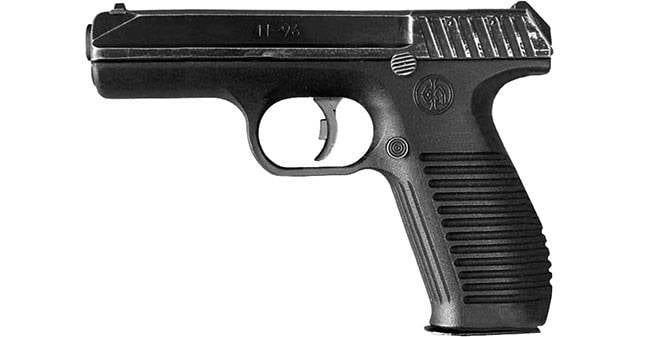 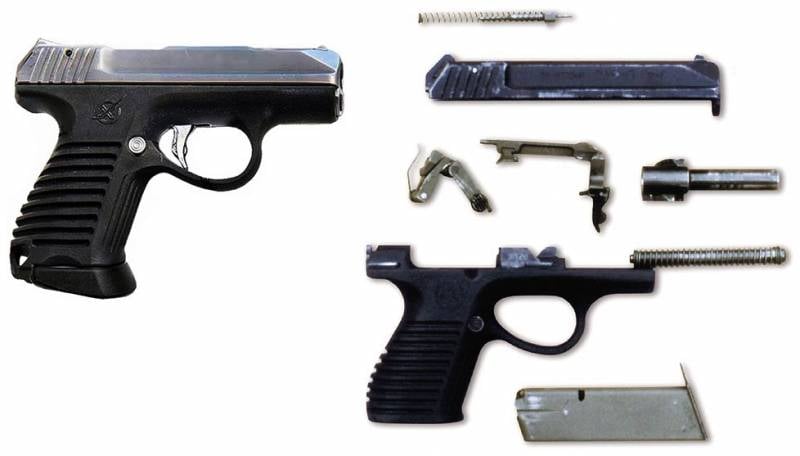 As part of the R & D "Grach" on an army pistol, the Central Scientific Research Institute of Precision Engineering (TsNIItochmash) in the middle of 90-i developed an SPS pistol (Serdyukov self-loading pistol) "Gyurza" (currently produced under the symbol CP1М) for an enhanced cartridge 9X21 mm . In the course of development, several variants of the pistol were worked out — with a fixed barrel and with a movable barrel locked by a swinging larva. As a result, the second option was chosen.

The ATP pistol has two automatic fuses - one at the back of the handle (turns off when grasping) and the second on the trigger, similar to the fuse used in Glock pistols. Manual fuse missing. A special feature of the firing mechanism is the impossibility of firing a shot when the trigger is not set on the safety platoon (to some extent this is a manual fuse, but very inconvenient).

Polymer pistol frame is made of glass-filled polyamide. According to personal feelings, the pistol is large, especially the handle, it is not very suitable for shooters with a small hand. Manual fuse in the back of the handle uncomfortably presses on the palm, all the time there is a desire to correct the grip.

The military rejected this model, but she was interested in special units of the FSB and FSO, they were interested in the high performance of the 9х21 cartridge against targets protected by body armor or obstacles such as the sides of a car.

In the second part of the article will be considered: pistol GSH-18 from the State Unitary Enterprise "KBP", Izhevsk pistols MP-443 and MP-444, PL-14 and PL-15. Russian-Italian "Strike One" and "Boa" from the Central Research Institute of Precision Engineering. It will answer the question: who is to blame and what to do?

In the comments, you can leave comments and suggestions for this article, if possible I will try to take them into account in the second part.