China copied all the latest projects of the Russian diesel-electric submarines, and possibly Lada 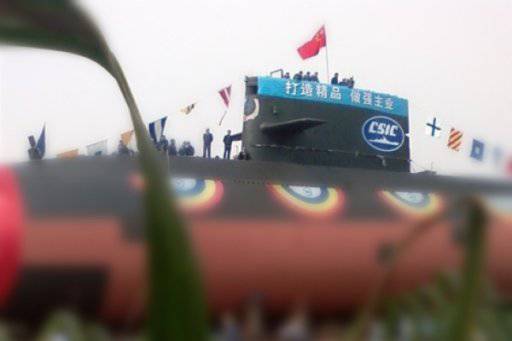 Recently, China launched a new diesel-electric submarine (see photo), but did not give any official information. The study of photographs allows us to conclude that it seems to be the diesel-electric submarines with the designation Type 41С, where Russian technologies are used, adapted for the Chinese project. The creation of this boat suggests that Chinese naval engineers have advanced significantly in this direction.

The class boat Type 41А looks the same as the Russian submarine of the class Kilo. At the end of the 1990s, the Chinese ordered the boats of the 877 (Kilo) project, which at that time were the most modern Russian non-nuclear submarines. Russia sold them for 200 million US dollars apiece, which was less than half the price of Western boats of a similar class. The boat has a surface displacement of 2300 t, six torpedo tubes and a crew of 57 people. They are able to overcome underwater 700 km in low-noise mode at a speed of 5 km / h, equipped with 18 torpedoes and SS-NN27 anti-ship missiles fired from torpedo tubes (range 300 km). The combination of low noise and cruise missiles make these boats very dangerous for US aircraft carriers. Boats of this type also buy North Korea and Iran.

China has already built three own Yuan class boats (Type 41). The first was a copy of the Russian boat project 877 (Kilo), the second of them (Type 41В) was an improved version of the head boat and corresponded to the latest version of Kilo - the project 636. These submarines were built to test stolen Russian technology. The third Yuan (Type 41C), launched the other day, seems to be a little different from them. This boat can be a copy of the latest version of the project 877 - "Lada".

The first Russian diesel-electric submarine of the Lada type went to sea trials three years ago, and a year ago was declared fit for use. The second submarine is under construction, in total it is planned to build eight diesel-electric missiles of this type. Kilo class boats entered the combat strength of the Soviet military fleet in the late 80s. In the Russian Navy, there were 24 units, 30 were exported. Shortly before the end of the Cold War, work began on the Lada project, but they soon reached an impasse due to lack of funding.

Lada are intended for the destruction of underwater, surface and ground targets, as well as conducting naval intelligence. It is believed that these submarines are eight times quieter than boats of the 877 Ave. This is achieved by installing a sound absorbing coating and quiet screws. The boat is equipped with active and passive sonars, including a towed passive gas, armament consists of six torpedo tubes of caliber 533 mm, ammunition 18 torpedoes and cruise missiles. Surface displacement reduced to 1750 t, crew 38 people. Each crew member has his own cabin with a berth, albeit a small one, which increases the morale of sailors.

Underwater, the Lada can reach and maintain speeds of around 39 km / h and sink to depths of 800 feet. The autonomy of 50 days, the maximum range of underwater travel with the work of diesel engines under water (RDP) with power through a retractable mast can be up to 10 thousands of km. When powered by batteries, the underwater stroke range is 450 km. The boat is equipped with an electronic periscope, which allows night vision and the use of a laser rangefinder. "Lada" was designed to use the technology of the power plant without surfacing (AIP - air independent propulsion). Russia has long been a pioneer of this technology, but lately Western Europe has taken over leadership in this area. The construction of the head "Lada" was started in 1997, but the lack of funding delayed work for many years, and only in 2005, its construction was completed. A less complicated version of the boat, having the designation "Amur", is offered for export.

It is believed that Yuan class boats are also equipped with AIP technology, which allows non-nuclear boats to be submerged for several days in a row. Currently, the PLA Navy has 13 boats of Song class (Type 39), 12 Kilo, three Yuan and 25 Romeo. To this day, there are only three Han class submarines, which speaks of the difficulties that the Chinese are experiencing in operating nuclear reactors in submarines. Despite this fact, the submarines are going to go to sea, where, with their great noise, they will be easily detected by Western acoustic systems.