Locked topic. What is known about the "30 Product"?

March 18 2019
85
Currently, preparations are continuing for the mass production of advanced Su-57 fighters. As in the case of prototypes, serial vehicles will be equipped with engines of two models. The first production models will be received by the existing AL-41FX1 engines (they are also the “first stage engines”), and then the newer 30 Products will replace them in the series. From the end of 2017, promising turbojet engines of the “30 Product” are tested in the air, and their production is expected to be mastered in the future in the interests of the mass production of aircraft.

However, to date, the developer represented by NPO Saturn, as well as officials from the Ministry of Defense and other structures, managed to reveal part of the data and draw up a rough picture. It is expected that in the future the flow of new information will continue, and the industry will reveal new details of the most interesting project.

Su-57 fighter belongs to the conditional fifth generation, which indicates the presence of a number of characteristic requirements. One of the main requirements is the provision of cruising supersonic speeds, including without the use of afterburner chambers. Existing serial engines do not allow to obtain such characteristics, and therefore requires a completely new power plant. A promising engine designed for the Su-57, like the aircraft itself, belongs to the conditional fifth generation - however, already in the field of engine building. 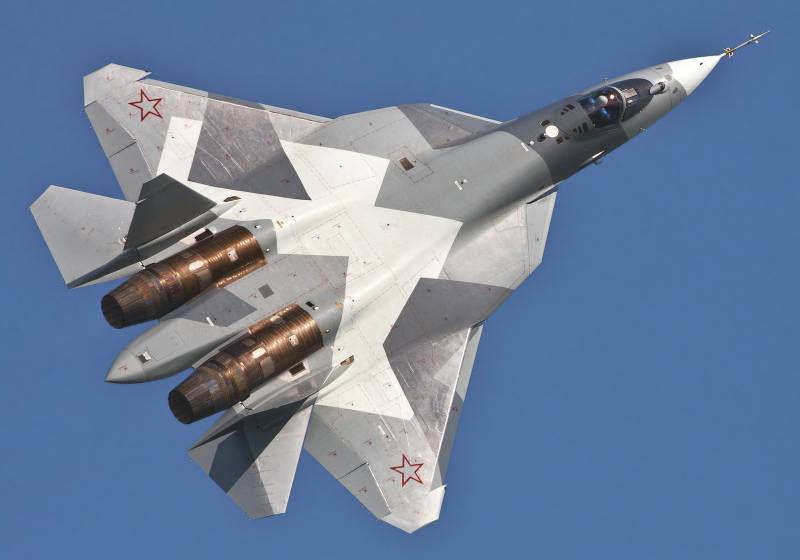 It is believed that the difference between generations of turbojet engines manifests itself in a change in the basic parameters. A sharp increase in the specific thrust or a reduction in the specific fuel consumption achieved in the new project makes it possible to refer it to the next generation. The newest XRUMX turbofan unit differs from existing systems in terms of these indicators, which allows its developers to talk about the creation of an 30 or 5 + engine.

High performance of the new engine is achieved, first of all, through the use of the most modern technologies, materials and solutions. At the same time, already developed ideas are also used. Thus, the "Product 30" continues the line of domestic engines with a standard nozzle having thrust vector control.

However, some modern solutions had to be abandoned. For example, in 2013, NPO Saturn showed a promising blade design for a high-pressure compressor made of titanium aluminide. There were reports of the possible introduction of such material into the design of the turbine. However, later, titanium aluminide as part of "Products 30" refused. The mass saving was insignificant, and the resistance to the increased mechanical and thermal loads characteristic of military engines is insufficient.

According to known data, the “30 Product” is a double-circuit turbojet engine with an afterburner. At the level of some basic ideas, it has similarities with older engines of the AL-31 and AL-41 families, but all its units were developed anew and using modern developments. The result was a noticeable increase in all of the main characteristics, which makes it possible to assign the “30 Product” to the next generation of turbofans.

The engine has the usual architecture for its class with multi-stage high and low pressure compressors, a combustion chamber and multi-stage turbines. Behind the turbines are the afterburner and the nozzle with the UHT. On the outer surface of the engine placed the necessary units for one purpose or another. The developers of the 30 Product do not rush to disclose all the details of the design, but some of the features of the new project are already known.

The compressor compresses the incoming air at a rate of 6,7, providing air flow rate up to 20-23 kg / s. The combustion chamber is equipped with a plasma ignition system, installed directly on the injectors. Such means provide ignition of the fuel immediately after it enters the combustion chamber. Thanks to it the optimum mode of burning is supported, and also so-called is excluded. Flare - incorrect combustion of fuel accumulated in the engine. The gas temperature in front of the turbine ranges from 1950 to 2100 ° K. For comparison, the serial engine AL-31F, this parameter does not exceed 1700 ° K. 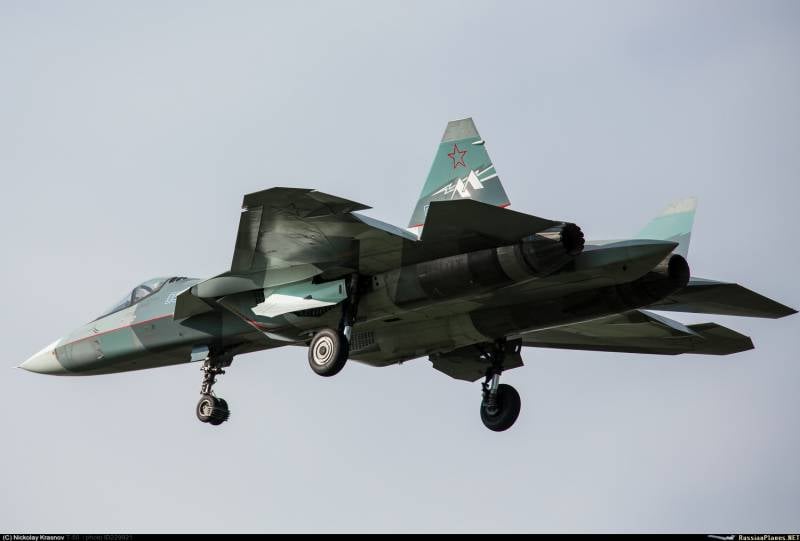 The 30 engine is equipped with a new nozzle that has thrust vector control functions. This unit is noticeably less used before and has other contours. In particular, the trailing edge of the nozzle, formed by individual flaps, gets an uneven shape.

An important feature of the design, providing new opportunities, is to change the degree of bypass. The project also took into account the need to reduce the visibility of the engine and the aircraft as a whole for radar and infrared surveillance systems. Such problems were solved by creating optimal air intake and nozzle designs.

For the new engine, an original electronic digital control system with full responsibility has been created. It receives data from many different sensors and monitors the operation of all engine components. Receiving commands from the pilot, the control system performs them based on current parameters and various factors. Automatics engine management simplifies the work of the pilot, as well as facilitates the configuration of the power plant to work in certain conditions.

All new ideas and solutions are designed to enhance the basic characteristics of the engine. According to open data, the maximum engine thrust “Product 30” reaches 11000 kgf, afterburner - 18000 kgf. For comparison, the engine of the first stage of the AL-41F1 has a thrust of 9500 and 15000 kgf, respectively. Thus, the Su-57, even with a maximum take-off mass exceeding 35, will have a thrust-to-weight ratio of more than one. With normal take-off weight, this parameter will reach 1,15-1,2.

The specific parameters of the new engine either improved or remained at the level of previous products. Thus, the management of NPO Saturn indicates that the specific fuel consumption of the “30 Product” remained at the level of the AL-31F engine - around 0,67 kg • kgf / hour. At the same time, the specific thrust increased, but the exact value of this parameter is not called. With such parameters, in terms of its size and weight, the 30 engine is not very different from the serial Russian turbofans.

Optimization of the main parameters leads to an increase in aircraft performance. According to various estimates, the cruising supersonic speed of the Su-57 aircraft without the use of an afterburner, provided by two engines with a load of 11000 kgf, can reach M = 1,5. The presence of a nozzle with a shock wave significantly improves maneuverability in all modes.

While promising TRDDF "Product 30" remains at the stage of flight tests and tested on experienced aircraft T-50 / Su-57. To date, produced about two dozen prototype engines designed for inspections on the ground and in the air. Flight tests of the engines continue for over a year and require more time. So, at the beginning of last year it was reported that the entire flight test cycle could take three years. 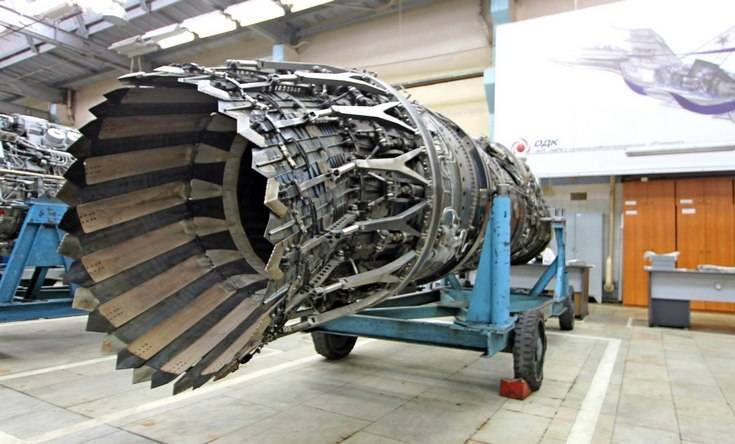 According to current plans, in the coming years, the Russian aerospace forces will receive several of the first production Su-57 fighter jets. The first cars of this type will be equipped with so-called. engines of the first stage - TRDDF AL-41F1. In 2020, the second contract for the supply of serial equipment should appear. This time we are talking about the introduction of new engines. Part of the second series of fighters will be equipped with "30 Products". Serial production of such engines will be mastered by the company "ODK-Ufa engine-building production association." In the future, approximately in the mid-twenties, the new engine will become standard for all serial Su-57.

In parallel with the testing and refinement of the “30 Product” in its existing version, work is underway to create new units for such an engine. The development of a flat nozzle capable of reducing the visibility of the aircraft in different spectra. Instead of a regular nozzle behind the engine, it is planned to place a curved channel on which two movable flat flaps should be installed.

The S-shaped channel covers the turbine blades from radar radiation, and the rectangular nozzle section reduces infrared radiation from reactive gases. At the same time, such units create additional resistance to the movement of gases, which leads to a slight reduction in the technical characteristics of the engine. The new nozzle is still in its early stages, and it is not yet known whether it will be introduced during future upgrades of the Su-57. However, with the help of such a project, Russian engine builders gain important experience.

Also reported on the elaboration of the creation of the engine of the "sixth generation". To further enhance the basic and specific characteristics, it is proposed to add a third circuit in addition to the two existing ones. However, such ideas are still at the stages of the earliest research, and therefore they can hardly be viewed in the context of further refinement of the Su-57 fighter jets.

So far, the main task of engine builders in the framework of the PAK FA program is the refinement of the “30 Products” with the subsequent launch of its production and the introduction of the Su-57 fighter jets into mass production. Apparently, the engine will go into the series in its current configuration - with a number of special technical solutions that enhance the overall characteristics. At the same time cardinal processing, such as installing a new nozzle, is not planned yet.

The main result of the project under the working designation "30" is the creation of high performance turbofans with high performance for the newest Russian fighter. In this case, do not forget about other important points. After completing work on the 30 product and bringing it to operation in the military, the Russian engine industry will once again show its potential and confirm its leading position.