On the border between Kyrgyzstan and Tajikistan, blood is shed again

March 16 2019
51
13 March A border conflict occurred in the Batken region of Kyrgyzstan due to the construction of the Kok-Tash-Ak-Sai-Tamdyk road. The Tajiks decided to prevent construction in the disputed territory. Their protest tried to stop the Kyrgyz border guards. Then residents of the nearest Kyrgyz village Ak-Sai got involved in the conflict. The opposing sides threw stones at each other. In the end, it came to shooting. 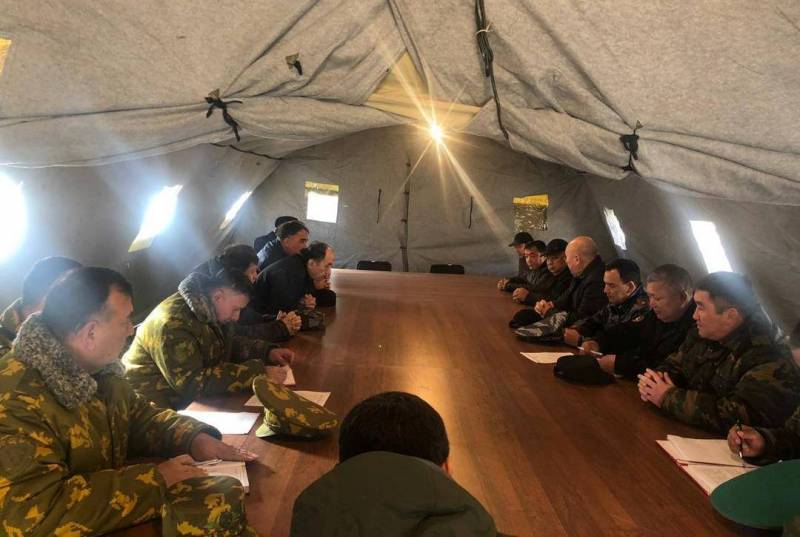 Kyrgyz border guards accused their Tajik counterparts of shooting. Allegedly, they shot in the air, but managed to injure a villager from Ak-Sai. The situation is heated to the limit. The Kyrgyz, led by the deputy chairman of the Ak-Sai village council (ayil okmotu) Erkin Zhalchiyev, in response took two Tajik minibuses (61 people) passengers as hostages and took them to the location of their border unit.

Residents of the neighboring Tajik village of Khojai Alo joined the conflict. Here already went hunting guns. According to the Nezavisimaya Gazeta, a village school teacher, Tajik Hakim Huseynov, was killed with a gun. Four more people were injured. During the conflict, a warehouse building, a mill, a car and a trailer to the truck were burned down.

The voltage at the boundary is maintained. Approximately one hundred Tajiks and Kyrgyz block the road from both sides. People do not disagree, although representatives of the local Tajik and Kyrgyz authorities have already entered into negotiations. The situation was taken under the control of the security forces and localized the conflict.

Apparently, he should not blow up the Kyrgyz-Tajik relations. This is evidenced by the departure of the President of Kyrgyzstan Sooronbay Jeenbekov on a European tour. Before that, the Kyrgyz leader had a telephone conversation with his Tajik counterpart, Emomali Rahmon. We agreed to create a "joint commission for an objective investigation and to prevent similar situations in the future."

Nevertheless, despite the bloody border incident, Zheenbekov flew on an official visit to five European countries on Thursday — Germany, Switzerland, France, Hungary and Azerbaijan. The president did not cancel the visits so important for Kyrgyzstan.

Many of them in Bishkek expect serious progress in relations with the West. According to Zheenbekov himself, his current tour will help strengthen mutually beneficial cooperation with European countries in the trade, economic, cultural and humanitarian spheres. First of all, we are talking about using the opportunities of such Kyrgyz industries as processing, light industry, food industry, energy and tourism.

The expected benefits of a European tour exceeded the importance of the conflict on the Kyrgyz-Tajik border. This can be understood. During the post-Soviet years, border incidents in the Batken region have become routine. According to experts, they occur "on average once a quarter." True, bloody clashes are less common. 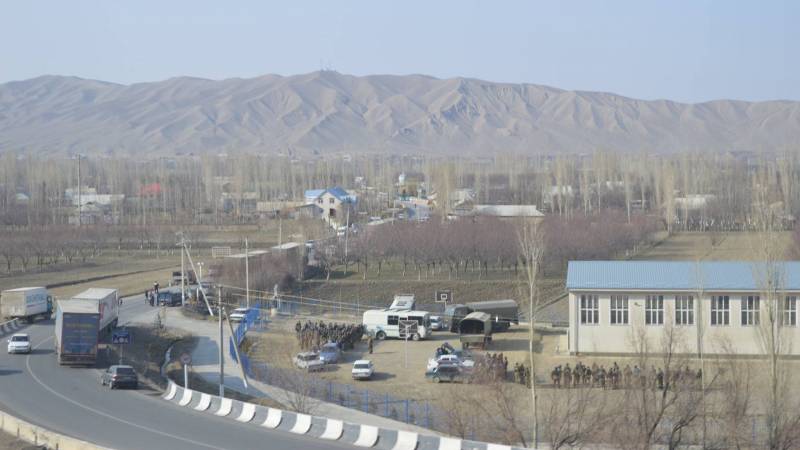 With stones and mortars against each other

The reason for the conflict may be very different. In one case, the wall on the wall came together and the people started to see the rockfall, Ak-Sai and Khodja Alo, who were already familiar to us, because the Tajiks did not let the Kyrgyz grader through their territory, aimed at clearing the country roads.

In the other, the Tajiks blocked the passage to the cemetery for the residents of the village of Kok-Tash. The Kyrgyz did not remain in debt and cut off the water in the canal going to the territory of Tajikistan. Abundant rockfall injured seven Kyrgyz citizens. Even the head of the Kok-Tash village council, Razia Osorov, went to the hospital.

Another household reason for conflict. A resident of the Kyrgyz village of Uch-Dobo decided to put a fence around her plot. The Tajiks were outraged because the state border was not agreed on this territory of the village, and they went to the Kirghiz with stones. About 50 people took part in the incident. Fortunately, he ended up bloodless.

But the conflict over the Kok-Tash-Ak-Sai-Tamdyk road has already led to blood. At the very beginning of construction, Tajik border guards attempted to stop road works. The report of the Kyrgyz Border Service described it (I quote from the KNEWS publication) as follows: “During the verbal scuffle, the Major of the Border Guards of the National Security Committee of the Republic of Tajikistan, loading his gun, put it to the temple of one of the border guards of the Kyrgyz Republic. The commander of the special forces unit of the Border Security Service of the Kyrgyz Republic, Senior Lieutenant Izat Buylashev, demanded that the Tajik border guard stop such actions, in response, the major of the MF of Tajikistan’s National Security Command fired from Builashev in the abdominal area. After the shooting occurred, during which the Tajik side used a mortar. The shootout and mortar fire lasted about 45 minutes. ” In this battle, five soldiers were injured.

In addition to border guards, drug traffickers and smugglers shoot in the disputed area of ​​the Kyrgyz-Tajik border. The fact is that one of the most important Afghan drug trafficking routes passes through the Batken region. Here, Russian and Kazakh fuels and lubricants and other goods demanded on local markets are smuggled across the border in the Afghan and Tajik directions.

So the place is brisk, and most importantly - uncontrolled. Since Soviet times, local villages have divided exclaves between neighboring republics. Now it is an independent state with a strip of ethnic settlements. Their central governments, passionate about the struggle for money, influence, and power, do not particularly care about solving the problems of the border population.

Suffice it to say that for all the post-Soviet times, Dushanbe and Bishkek have not carried out the demarcation and delimitation of the border. Still not described and considered controversial 472 of 976 kilometers of the joint border. Last February at the bilateral talks in Dushanbe, the presidents of Tajikistan Emomali Rakhmon and Kyrgyzstan Sooronbay Jeenbekov promised to speed up the solution of this problem.

However, the promises of the two leaders turned out to be empty words. Instead of restoring administrative order in the border enclaves and exclaves of the Sogd oblast of Tajikistan and the Batken oblast of Kyrgyzstan, criminal, radical religious and even terrorist groups feel quite comfortable here. As expert Alexander Knyazev noted in the Nezavisimaya Gazeta, these groups have already grown together with local law enforcement agencies.

For the time being, they “show little of themselves, but their participation in border conflicts is, so far, indirectly, traced constantly,” said Knyazev. Therefore, the authorities of the two republics are now finding it increasingly difficult to distance themselves from solving the border problem. Some of its exacerbations are attributed to the upcoming Russian president Vladimir Putin’s visit to Kyrgyzstan in late March.

According to Andrei Grozin, head of the department of Central Asia and Kazakhstan at the Institute of CIS countries, published in the Vzglyad newspaper, there are strong expectations in Bishkek that Putin will come and "judge everyone." One could agree with that. However, Putin will not divide the border between the two countries.

Bishkek and Dushanbe must pass this road themselves. The bloody conflict surrounding the road under construction, according to the former prime minister of Kyrgyzstan, Felix Kulov, was the result of flaws in the Kyrgyz government agencies that did not "conduct awareness-raising work with the public and did not use the methods of public diplomacy." No matter what they say, the new road benefits all parties to the conflict. In this they need to be convinced.

Meanwhile, the heads of the foreign ministries of Kyrgyzstan and Tajikistan discussed the conflict in Ak-Say and declared “the need for stress relief”. The ministers promised "to strengthen the good-neighborly relations of two fraternal peoples." The use of fairly shabby rhetoric in a joint statement by diplomats does not promise quick changes in the Kyrgyz-Tajik frontier.

Author:
Gennady Granovsky
Photos used:
Press Service of the Government of Kyrgyzstan; Infoportal of the Ministry of Internal Affairs of Kyrgyzstan

Ctrl Enter
Noticed oshЫbku Highlight text and press. Ctrl + Enter
We are
The southern frontier is under threat. Will Central Asia protect itself?Hot frontier. Armed conflict between the border guards of Kyrgyzstan and Tajikistan - the CSTO member states
Military Reviewin Yandex News
Military Reviewin Google News
51 comment
Information
Dear reader, to leave comments on the publication, you must to register.