March 15 2019
22
In February, another solemn ceremony was held in India, associated with the latest HAL Tejas Mk 1 fighters. Aviation the regulator officially authorized the air force to operate this type of aircraft. Tejas fighters were adopted several years ago and are already being mass-produced, and now the Air Force has the right to fully use them. Nevertheless, the latest Indian aircraft still have a lot of problems and do not meet the requirements for modern fighters. How should this project be evaluated?


Time and its requirements

History The project, now called Tejas, is well known. The development of a promising Indian lightweight class fighter was launched in 1983 year. According to the plans of the time, the goal of the project was to create an aircraft to replace the Soviet MiG-21. The development of the project was to be carried out by local industry with minimal participation of foreign organizations. The lack of serious experience and design school led to understandable results, the consequences of which are still felt. 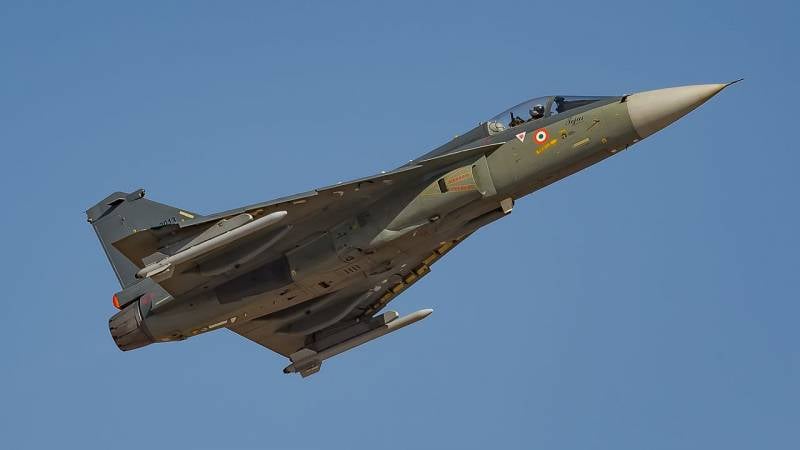 Thus, the first prototype LCA type aircraft was built only in the 1996 year, and its flight tests began in the 2001-m - almost 18 years after the start of the program. Further testing, refinement and refinement of the project also took a lot of time - due to technical and technological problems, as well as due to repeated changes in customer requirements. The LCA / Tejas fighter was adopted only in the 2015 year, and an operating permit appeared only a few weeks ago.

Lack of experience and design school led not only to delay the work. Indian specialists from Hindustan Aeronautics Limited and related organizations had to independently solve various engineering and scientific problems that had long been studied by foreign colleagues. There were also known technological difficulties.

The main provisions of the current Tejas project were laid at the turn of the eighties and nineties. Since then, the design and composition of equipment has been changed several times, but the overall concept has not undergone fundamental changes. Apparently, this may also be the roots of current problems. 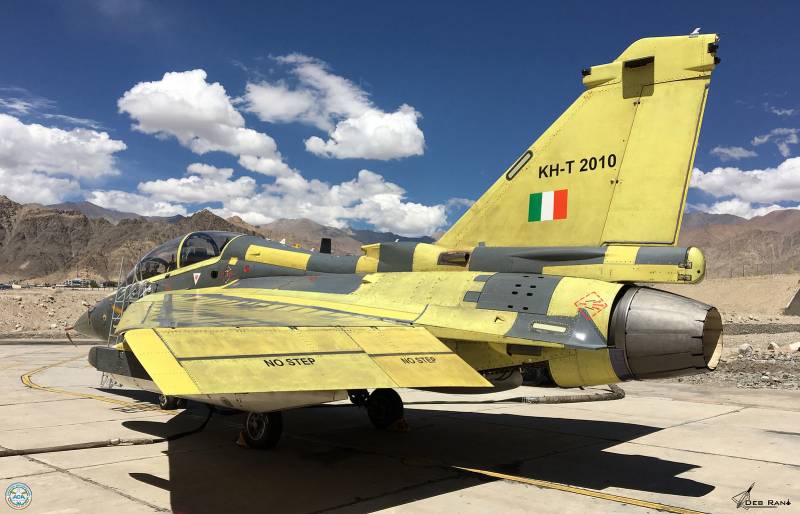 In fact, the project Tejas was about trying to catch up with world leaders, having limited capabilities. The results of this are well known: only a few years ago, India was able to bring to use its first fourth-generation fighter. It should be noted that at the same time, the leading countries with developed aviation industry managed to master the next fifth generation, ensuring a serious lead. If in the past, in the first years after the start of work on the LCA, the new Indian plane could be considered modern with reservations, by now it has become morally obsolete.

Several Indian organizations are involved in the production, responsible for the supply of certain units and the implementation of various works. At the moment, the main tasks of the project are solved by the state enterprise HAL. It produces a number of components, receives aggregates from subcontractors, and performs a general assembly. However, this approach does not allow to obtain the desired rate of production. HAL can produce no more than 15-16 machines annually. 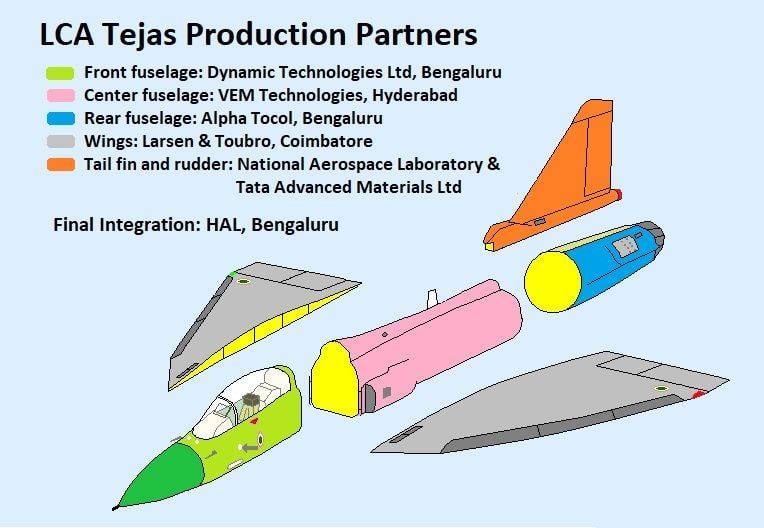 Division of airframe into units for production at different enterprises. Figure Wikimedia Commons

To increase the pace of production, it is proposed to involve private companies in the work. There is a plan according to which the wing will be made by Larsen & Turbo, and the fuselage will be assembled from components from Dynamic Technologies), VEM Technologies and Alpha Design & Dynamics. The approach to the production of avionics and other equipment will remain the same. At the expense of cooperation it is planned to increase the rate of release to 24 fighters per year.

The Indian Air Force has already ordered a new type of Hindustan Aeronautics Limited 120 company. To date, about a quarter of this order has been completed. It is planned to complete deliveries under the current contract in 2025. Getting to the desired pace of production will allow faster to get all the fighters of the first contract, after which a new one should appear. 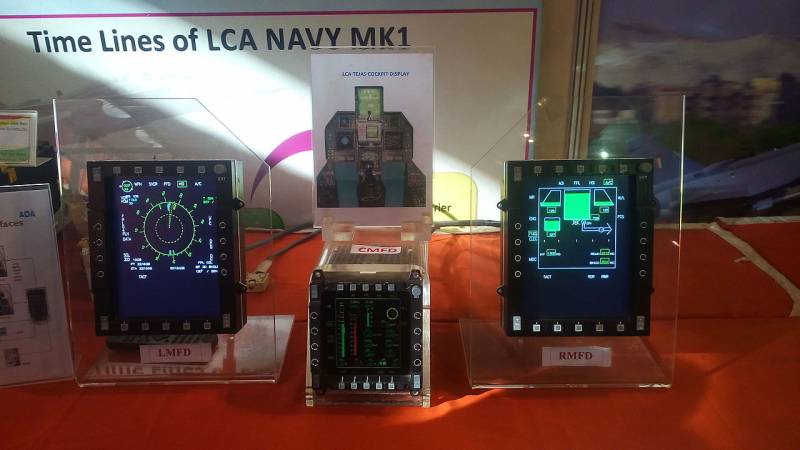 According to various estimates, the Indian Air Force needs hundreds of light fighters. Some of these needs are planned to be closed by purchasing imported equipment, while others will be built independently. It is believed that the purchase of modern foreign aircraft with the simultaneous construction of HAL Tejas will update the fleet of equipment with the desired results and at reasonable costs.

Production problems are not least related to the characteristic technical appearance of the aircraft. Thus, the Indian airframe uses modern materials and technologies, the creation and development of which was not an easy task. In its current form, the Tejasa glider includes aluminum and titanium alloys, as well as several types of composite materials. Composites account for almost half of the mass of the structure and 95% of the outer surface of the aircraft. Composites also reduced the weight of the aircraft by 21% compared to the all-metal construction.

A significant part of the composite parts is in the form of large-sized panels. It is from these parts consist of the wing and the keel. Control surfaces are also mainly made of non-metallic materials. Mastering the production of such components is an extremely difficult task, even for a developed industry. Not having the necessary experience, India coped with it, and now it can produce serial fighters. 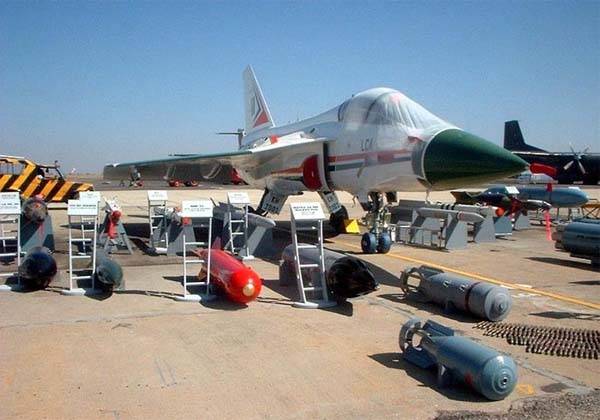 One of the first prototypes of LCA / Tejas and its nomenclature of armaments. Photo Airwar.ru

Tejas serial fighters are equipped with General Electric F404-GE-IN20 turbojet engines. In the past, the development of its own engine GTRE GTX-35VS "Kaveri", but the lack of experience and the necessary technology is not allowed to complete it successfully. However, the imported engine solves the tasks and gives the aircraft the desired characteristics.

Avionics was created by the joint efforts of Indian industry and foreign enterprises. So, on the “Tejas” aircraft of different series, the radar stations EL / M-2032 and EL / M-2052, created with the active participation of the Israeli company Elta, are used. Israel also contributed to the cabin equipment and other onboard equipment. The cab has been developed with extensive use of multifunctional screens, a helmet-mounted target designation system, as well as HOTAS-type controls.

The maximum take-off mass of the HAL Tejas fighter reaches 13,5 T. The maximum speed is 2200 km / h, the combat radius using PTB is 500 km. The payload is defined in 3,5 t. Thus, even in the basic flight performance of the Tejas, at least, does not exceed other planes of its generation. 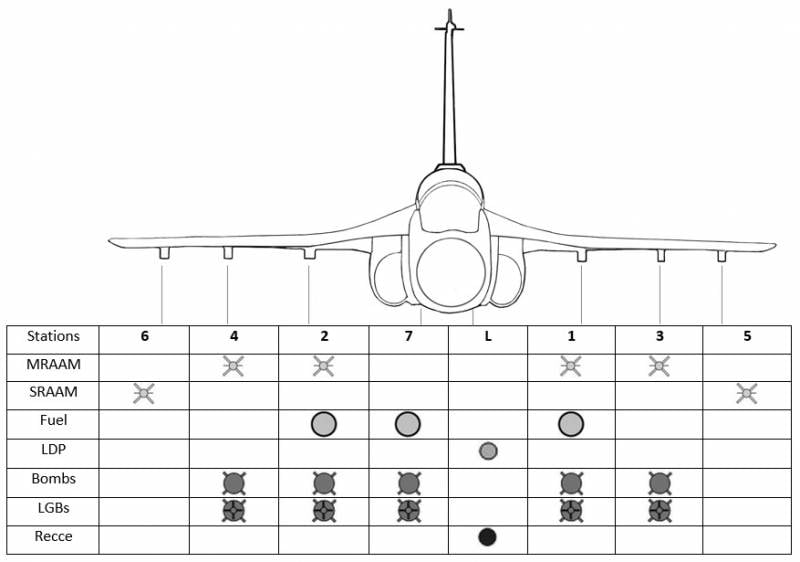 The aircraft has a built-in gun GSH-23. On the fuselage there are two external suspension assemblies (one specifically for hanging containers with equipment), another six are under the wing. Tejas Mk 1 is able to carry and use guided and unguided weapons to attack ground and air targets. Declared compatibility with almost all aviation samples weapons, in service with the tactical aviation of the Indian Air Force. From the point of view of armament, Tejas has no radical advantages over foreign equipment of its class.

After several decades of work, Hindustan Aeronautics Limited and related enterprises from India and other countries were able to bring their own-designed fighter to mass production and operation. Aircraft type Tejas Mk 1 built serially and delivered to the troops. By the middle of the next decade, the first order is planned to be executed, after which the Air Force will have 120 of such machines.

For a number of characteristic reasons, the Tejas fighter cannot be considered fully a modern model of its class, and it’s too early for its creators to claim world leadership. In addition, they have more important tasks. The aircraft still retains certain shortcomings that need to be addressed. Now HAL aircraft manufacturers are engaged in improving production technologies and preparing for new assembly methods, as well as developing a project for a modernized fighter. 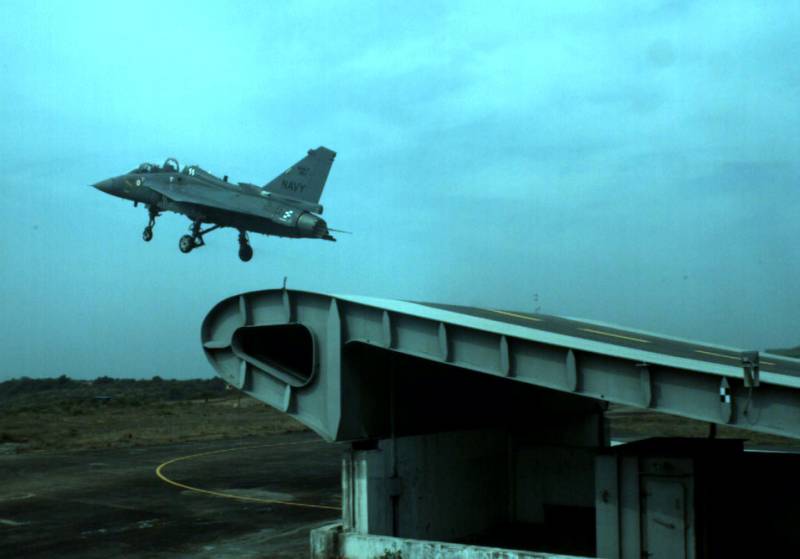 Tests HAL Tejas as a deck plane. Photos of the Indian Navy / indiannavi.nic.in

In 2020-22, India plans to complete the development of the improved Tejas Mk 2 fighter. It will be larger than the existing one and will be able to show higher performance. In particular, they are going to bring the payload to 6,5 m. Also in the developers' plans there is a deliverance from the characteristic shortcomings of the previous project. On the basis of the aircraft Mk 2 planned to develop a double fighter for use in carrier-based aircraft.

The Tejas fighter itself in its current form can be attributed only to the fourth generation, which shows the well-known lag of the Indian aviation industry from world leaders. The aircraft being developed by the Mk 2 will also not be able to show itself as the fighter of the last fifth generation. However, even in this case, the two new projects are of particular importance to India, and this can outweigh all the flaws.

Working independently and together with foreign colleagues, Indian specialists have gained valuable experience in the development of aviation technology. In addition, a number of enterprises had to develop new materials and master new technologies for themselves. Thus, now India has not only a ready-made aircraft, but everything that is needed to create new projects. This fact is considered as a reason for optimism. Even if the existing “Tejas” was not very successful, the next plane of its own design will be able to show the desired capabilities. 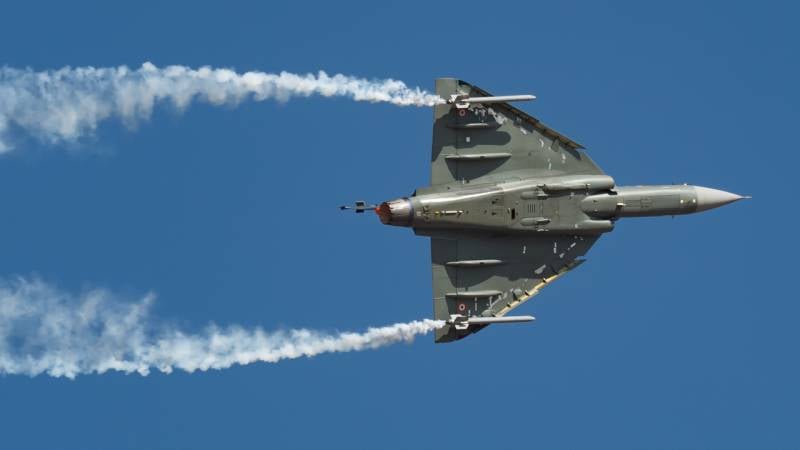 Tejas Mk 1 during a demonstration flight. Photo of Wikimedia Commons

However, the impact of the current project should not be overestimated. It is also desirable to do without overly optimistic assessments. Most likely, the Indian industry, having limited capabilities, will not be able to start large-scale production of Tejas aircraft of the first and second models. As a result, the fleet of light fighters will have to be updated not only on their own, but also with the help of purchases of foreign technology.

Currently, the Indian Air Force is conducting a new tender for the purchase of imported fighters, in which several foreign companies are participating. How quickly this competition will end, and what its results will be, is unclear. However, it is clear that the search for the best deals will go along with the development of their own projects. It is possible that the serial Tejas Mk 2 will be commissioned at the same time as the foreign samples planned for purchase.

Thus, it is to be expected that their own fighter projects will not yet allow India to carry out timely and complete re-equipment of the air force. However, work on this topic will help Indian specialists to learn how to make aviation equipment, and the main results of this will manifest in the future. In the meantime, HAL and its affiliates have every right to be proud of their own Tejas Mk 1 fighter aircraft and to prepare for the release of the next machine version of the Mk 2.

We are in Yandex Zen
An-12 in Afghanistan
MiG-23 fighters in Afghanistan
22 comments
Information
Dear reader, to leave comments on the publication, you must to register.