BPC Severomorsk left Sevastopol and headed for the Mediterranean Sea 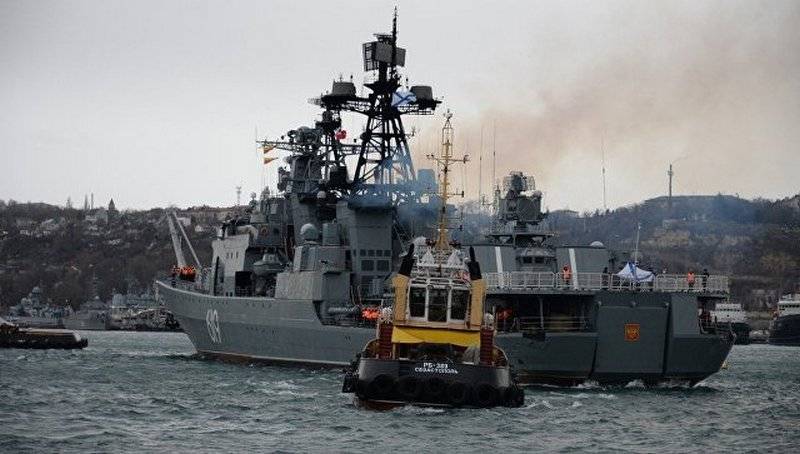 The press service said that the BOD Severomorsk today set off from Sevastopol for a long hike after a two-month stay at the main base of the Black Sea Fleet. The reasons for the long parking of the ship are scheduled maintenance and the release of personnel after a previous long hike. According to preliminary information, "Severomorsk" went to the Mediterranean Sea, where he would spend some time, and from there he would make the transition to the point of permanent deployment to the main base of the Northern Fleet - Severomorsk.

The ship left Severomorsk at the beginning of July last year, took part in the Main naval parade in St. Petersburg, after which he performed tasks as part of the permanent compound of the Russian Navy in the Mediterranean Sea. From late September to mid-December, BOD was located in the waters of the Indian Ocean, Gulf of Aden, Red Sea and Arabian Sea, where he performed tasks to ensure the safety of civilian shipping. 10 arrived in Sevastopol on January of this year and immediately got up for maintenance.

Ctrl Enter
Noticed oshЫbku Highlight text and press. Ctrl + Enter
We are
BPK "Severomorsk" completed technical repairs in SevastopolThe Russian fleet is able to act. To the results of exercises in the Mediterranean and Black Seas.
Military Reviewin Yandex News
Military Reviewin Google News
27 comments
Information
Dear reader, to leave comments on the publication, you must to register.